The inferior vena cava (IVC) is the largest vein in the body, completely valveless structure. It is responsible for the majority of venous return from the lower extremities and abdomen, and drains into the right atrium. The anomalies and variations of IVC anatomy are very rare occurring in approximately 0.3% of the population. Development of the IVC occurs during the 4th to 8th week of gestation, and due to its developmental complexity, there are many opportunities for malformations to occur. Thus, from 15 to 60 variations and abnormalities of IVC are reported in literature and only certain types are considered to be of clinical significance while the majority of these congenital conditions remain silent [1-5]. However, even if silent, the knowledge of these variations may be helpful to the surgeon for a proper approach to major surgery and to avoid surgical complications. Herein, a very rare anomaly of inferior vena cava was reported during a pancreatic resection.

A 61-year-old woman was observed for an asymptomatic pancreatic body cancer. Her medical history was positive for sinus node disease treated with bicameral pacemaker. During a pre-operative thoraco-abdominal spiral multiphase CT scan, an inferior vena cava (IVC) anomaly was incidentally discovered. By examination of CT scan, the anomaly seems an IVC duplication that occurs below the renal veins (Figure 1b). Thus, a double IVC was identified, right inferior vena cava (RIVC) and left inferior vena cava (LIVC), anastomosed distally, below the renal veins, by a venous trunk located behind the aorta that we called “retroaortic communication” (RC) (Figure 1a-1c). The right renal and gonadal veins drains in the RIVC that drains into the right atrium (Figure 1a and 1b). The iliac veins left renal and gonadal veins drains in the LIVC. In the thorax, the hemiazygos vein (HV) represents the full continuation of the LIVC. Finally, HV drains in the azygos vein (AV), after passing behind aorta (Figure 1b and 1c). The patient underwent sub-total pancreatectomy with splenectomy without intra-operative complications. The post-operative course was uneventful and the patient was discharge at postoperative day 7. 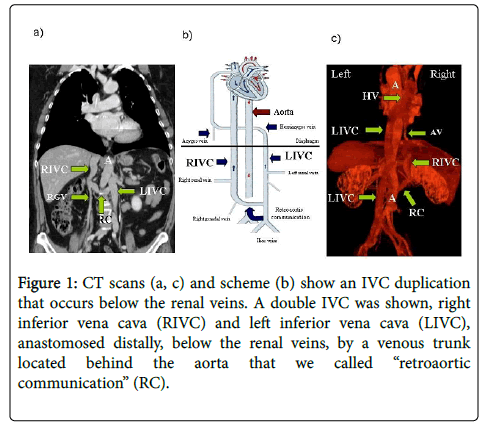 The IVC embryogenesis is very complex and several variations and abnormalities of IVC may develop. These variations are very rare and often clinically silent and discovered incidentally during an imaging study. Among these, IVC duplication is very rare accounting for about 2-3% [6]. Even if there are several anatomic variations of IVC duplication, typically duplication occurs below the renal veins with right inferior vena cava dominates and left inferior vena cava terminates in the right inferior vena cava at the level of the left renal vein. In our case, a preoperative abdominal spiral multiphase CT scan recognized a very rare anatomic variation of IVC duplication. In fact, duplication occurs below the renal veins, the right inferior vena cava dominates but the left inferior vena cava drains in the hemiazygos vein, in the thorax. This embryologic abnormality seems due to a persistent thoracic supracardinal vein, left lumbar vein, and left suprasubcardinal anastomosis along with malformation of right sub cardinal-hepatic anastomosis [6]. In the planning of a pancreatic resection the recognition of IVC anomalies may be important to avoid intra and postoperative complications. In fact, double IVC can be misinterpreted as a mass or lymphadenopathy and the surgeons must be aware of the existence of a double IVC so as to not mistake it for a pathological lymphadenopathy or saccular aortic aneurysm, left pyelouretic dilatation, or retroperitoneal cyst. Intraoperative complications can be related to the damage to these unexpected structures that can result in venous hemorrhage. In addition, a double IVC has been mistaken for an abnormal form of a gonadal vessel and ligated. Finally, a postoperative thromboembolism could be possible with an IVC anomaly.

In conclusion, IVC duplication represents a very rare anomaly, but in patients affected by pancreatic cancer potentially resectable, it has to be recognized and pointed out to avoid intra and postoperative complications.

No commercial interest, financial source or material support to disclose.

Riccardo Casadei and other co-authors have no conflict of interest.

Copyright: © 2015 Casadei R. This is an open-access article distributed under the terms of the Creative Commons Attribution License, which permits unrestricted use, distribution, and reproduction in any medium, provided the original author and source are credited.