Palocurrent analysis study was carried out in Amsiri, Akpoha and its environing in the lower Benue Trough. This study was carried out to determine the direction of ancient flow. Compass/clinometers were used to obtain several measurements from outcrops within the study area. Sedimentary structures were also observed in the study area which includes tabular cross stratification, beddings, herribone structures, asymmetrical ripples and trough cross beds. Asymmetrical ripples and trough cross beds indicates a low energy current. Tabular cross stratifications, herribone structures, where formed by high energy currents. The herribone structures are evidence of different paleocurrent directions as they are formed when current periodically flows in opposite directions. Based on the Rose diagram plot, the paleocurrent direction pointed at two directions; NE direction in location 2 and 3 which are Ameata and Ibii and the NE/SW/NW direction in location 1 which is Akpoha. This however shows that the sediments were derived from two main sources.

Paleocurrent study is an important part of sedimentology; it provides direct information about the orientation of the sedimentary system. Paleocurrent analysis can yield information about the flow direction of rivers, long shore currents, sediments, gravity flow and paleowinds. This in turn helps establish a model of paleogeography, which can lead to better predictability of economically important facies. The work studies directional and other primary properties of sedimentary rocks from which we can reconstruct current systems and make a paleocurrent analysis.

The examination of modern seas, estuaries, and rivers, shows that there is a distinct relationship between their physical and the current present in them; currents so impress themselves on the deposit formed under their influence that their characters can be ascertained from those formed in the ancient periods. Therefore their physical geography can be inferred within certain limits. Paleocurrent analysis has had a long heritage that includes a large portion of geology. It is closely related to and dependent on stratigraphy, sedimentary petrology and structural petrology.

Paleocurrent analysis depends on the presence in sedimentary rocks of numerous properties from which current direction can be inferred. These properties occur, in varying kinds and abundant, in all sedimentary basins from the present to the far geologic past.

The Benue Trough is an intercontinental rift basin characterised by tectonic and magnetic activities during cretaceous time. The Benue Trough can be sub-divided into lower, middle, and upper parts that were affected by santonian compression which deformed the Benue Trough by inverting the main depocenter of the Abakaliki Trough and subsequently creating the Anambra and Afikpo basin to the north-west and south-east respectively [1,2]. The santoniantectonism differentiated the sedimentary succession into pre and post santonian packages. The post santonianmaastrichtian deposit occur both in the Anambra and Afikpo basin respectively [3]. The Nkporo formation rest on the post santonian unconformity plane which lies above the pre santonianEze- Aku formation of Turonian times. The Asu River Group rest on the basement and lies below the Eze-Aku formation.

Location and accessibility of study area

The study area covers an area within longitude 7° 50°E and 7° 55°E, and latitude 5°50°N and 5°55°N. The area is also located in the Afikpo syncline in South Eastern Nigeria which is in Afikpo local Government area of Ebonyi Nigeria. It covers an area of about 60 km2 (sixty square kilometres) (Figure 1). The vegetation of the Afikpo area belongs to the Guinea Savannah vegetation belt of Nigeria which is associated with thick vegetation cover similar to that of Rain Forest, as part of the south east Nigerian tropical climate condition (Figure 2). This vegetation cover is more pronounced in the flood plain area where they are more nutrient rich in soil is characterized by tall trees, climbers, shrubs with abundant palm trees and some areas where there are no or less nutrient, where by the trees find it difficult to survive. The vegetation is influenced by human activities, annual rainfall, topography and other climatic factors (Figure 3). Figure 3: The figure shows the vegetation and topography of Akpoha and its environs. 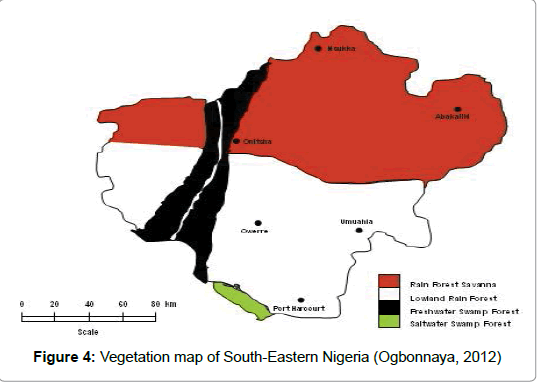 The evolution of sedimentary basins in South-Eastern Nigeria followed the opening of the South Atlantic and the break-up of the South American and West African plates in late Jurassic times. The probasin of the Benue Trough was the failed arm of an RRR triple junction which extended from the Northern limits of the Niger Delta Basin to the Chad area in the NE [4].

A review of the tectonic framework of the inland sedimentary basin of Nigeria has demonstrated that the Benue Trough system was indeed a rejuvenation of existing basement fractures. Wrench movements along these faults resulted in blocks faulting and formation of several sedimentary basins. The Benue Trough system had in the past been conveniently subdivided into the lower, middle and upper Benue Trough. However recent aeromagnetic and gravity data across the entire system has demonstrated the distinct nature of these basins each with its well defined sedimentary succession and separated by positive anomaly areas. Sediment thicknesses of up to 8 km have been recorded in some of these basins within the trough. In South-eastern Nigeria they include the Abakaliki, Anambra and Afikpo basins, as well as other minor basins such as the Calabar Flank and Mamfe Embayment which together form the lower Benue Trough. The Paleogene basin has been influenced mainly by the later generation transform faults (Charcot, Chain, Ascension & St. Paul’s) which emanate from the mid-Atlantic ridge system and now extend only into the Tertiary basin. Up to 12 km sediments have been deposited within the central part of the Niger Delta basin, much of which is above oceanic basement (Figure 5). The Benue Trough has often been described as elongated, partly fault bounded depression occupied by up to 6000 meters marine, fluvial and deltaic sediments that have been compressionally folded in a nonorogenic shield environment [5] emphasized the wholly nature of the Trough, the thin crust beneath it and the dominate influence of vertical movement as a course of the folding. Figure 6: Showing the stratigraphy of the study area.

Geology of the study area

In the Afikpo Basin, three main Cretaceous lithostratigraphic units have been recognized, namely; The Asu River Group, the Eze-Aku Group and the post Santonian Proto-Niger Delta succession [8]. The area consists of some parallel and high anticline and syncline structures that show outcrops.

The Eze-Aku beds overly the Asu river Group unconformably and consists of shales, limestones and sandstones ridges which strike, on the average, NW 40o SE with dip ranging from 20° to 68° [13,14]. The sandstone bodies are parallel to elongate features. The Eze-Aku beds represents the second transgressive depositional cycle that occured during the Upper Cretaceous [1].

The end of the Turonnian was marked by a regressive phase which was terminated by a third sedimentation cycle of the Campanian- Maestrichian transgression and regression which led to the deposition of the post-SantonianCampanian-Maestrichian proto-Niger Delta Sequence in the broad and gentle depression of the Afikpo Basin. The post-Santonian (Campanian-Maestrichian) sediments overly the Eze- Aku strata unconformably [15]. These beds comprises of alluvial, fluvialshallow marine conglomerates and sandstone, mudstone and shale which show a NE – SW trend. Following the Southwestward Shift of the depositional axis in the Southern Benue trough, the parallicNkporo Formation, Mamu, Ajali and Nsukka Formations were deposited in the subsiding Afikpo basin [16]. The Late CampanianNkporo Formation consists of basal alluvial sediments and conglomerates overlain by alteration of sandstones, siltstones, shales, mudstones, and coal beds (0.250 – 5 m thick). Basin ward, these sequences laterally changes to deltaic and tidal channel deposits.

This has to do with various methods employed in the study. The method applied in the collection of data in the course of carrying out this research work involved several methods. The methodology applied in this study encompasses description of outcrop sections of the Amasiri sandstone exposed behind Government College in Afikpo area.

The method employed in this research work was field studies. This was done in order to obtain data (results) on paleocurrent and sedimentary structures occurring Amasiri sandstone; behind Government Secondary School Afikpo and Government technical College Akpoha [17-20].

The field method was used specifically for the collection and interpretation of data behind government college, Afikpo.

Measurements were done at regular interval (10 ft) from the base of the outcrop to the top in a vertical section [22-24]. The geological field mapping of this work involved description, and sampling of the exposed section of the sandstone of Eze-Aku formation. The sandstone outcropping behind Government College, Afikpo were studied.

This data was obtained from the field using a compass clinometer measuring from outcrop to outcrop in different locations and paleocurrent analysis measurements are acquired from deformed beds. 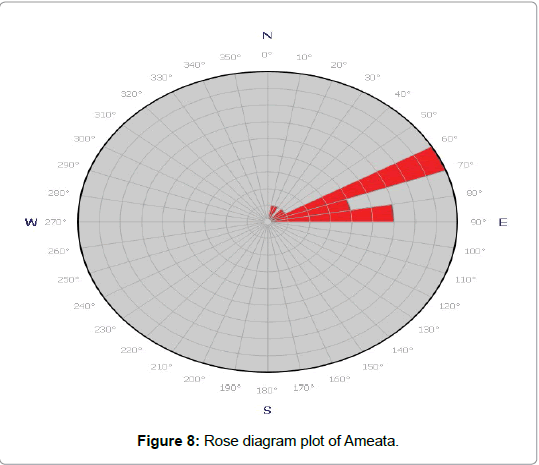 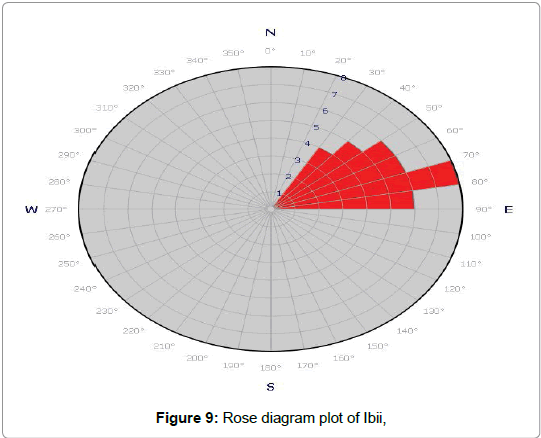 From the Rose diagram plotted, the current direction is interpreted to be in the NE direction in locations two and three which are Ameata and and Ibii town. This implies that the formations in this area were deposited in NE direction. While for that of location one (1) Akpoha

Technical College, the paleocurrent direction as measured from the inclination of the cross beds is pointing to the NE/SW/NW direction. From the differential directions of the paleocurrent, it can be said to have resulted from a reversal of current, as the current that deposited sediments in the area are bimodal (predominant current directions) and bipolar (two opposed direction) (Figure 10). The paleocurrent direction is NE in Ameata and Ibii Town. The paleoflow is North-eastern, this suggesting that the sediments were derived from the Oban Massif, in the Calabar flank which is located in the Northeast. The Amasiri Sandstone together with the adjoining Konshisha River Group deposits were largely derived from the Basement Complex areas around Ogoja [25].

The SW directed paleoflow is measured from the friable, cross bedded, arenaceous sandstones. Since the paleoflow is in southwesterly direction, an indication shows that it is from Basement Complex areas around Ogoja.

The grain size of sandstone outcrops ranges from fined to medium grained quartz arenite, they are poorly or moderately sorted. Based on this parameter, the formation indicates low energy and moderate energy depositional medium.

This work has examined the sedimentology of the Amasiri sandstone of the Eze-Aku Group exposed at the eastern flank of Abakaliki fold belt with respect to the fluid of observation gathered and also gotten from previous works on the geology of the southern Benue Trough. The Benue Trough was formed as a result of series of tectonism and repetitive sedimentation. A clean imprint of this information had been left in rocks found in the area. Highly undulating alteration of sandstone ridges and shale low land trending in a NE-SW direction are found in the area, and also some sedimentary structures were found on the surface of the rock. The Amasiri sandstone is moderately sorted, very fine to coarse grained, highly consolidated and feldspathicarenite sandstone. Marine fossils can be found in them. A combination of sedimentary structures is strong indicators of a particular sedimentary environment and at the study area. The sedimentary structures are as a result of low to high energy current. From the Rose diagram the currents direction is interpreted to be in the NE direction and NE/SW/ NW direction at three different locations. This implies that there was a reversal of current,as current that deposited sediments are bimodal (predominant current directions) and bipolar (two opposed direction). The paleoflow is North-eastern, this suggesting that the sediments were derived from the Oban Massif, in the Calabar flank which is located in the Northeast. The Amasiri Sandstone together with the adjoining Konshisha River Group deposits were largely derived from the Basement Complex areas around Ogoja. The sediments might have been derived from the North eastern part of Nigeria (younger granites), south eastern basement complex and the Abakaliki syncline.

Copyright: © 2017 Akana TS, et al. This is an open-access article distributed under the terms of the Creative Commons Attribution License, which permits unrestricted use, distribution, and reproduction in any medium, provided the original author and source are credited.
Top