Background: Myelodysplasia comprises a heterogenous group of disorder characterized by ineffective hematopoiesis and extensive apoptosis of hematopoietic cells. Although previous studies revealed few cytogenetic and molecular abnormalities, the underlying defect in the molecular pathway for extensive apoptosis and dysplasia observed in the disease is yet to be identified. This study aims to evaluate the pro-inflammatory cytokines and transcription factors levels in the refractory anemia subset of myelodysplasia (MDS-RA). The study evaluated bone marrow aspirates from 35 MDS-RA and 10 leukemic cases. All samples were analyzed for the rate of apoptosis, levels of various pro-inflammatory cytokines such as TNF-α, TNF receptors, TGF-β, Fas, IFN-γ and transcription factor NFκB that moderates the apoptotic pathway, were estimated by quantitative PCR. Results: Increased apoptosis in conjunction with significantly elevated cytokines levels of all the three subtypes of TGF-β1, TGF-β2, TGF-β3, TNF-α in MDS-RA samples. TNFR1 and TNFR2 (p<0.05) expression were significantly increased in MDS-RA than the leukemia group along with the Fas and INF-γ. Expressions of transcription factor subtypes NFκB1, NFκB2 and NFκB3 were observed significantly high (p<0.05) in MDS-RA compared to leukemia group. Conclusion: The findings of the study imply a defective signaling of pro-inflammatory cytokines and transcriptional factor NFκB pathway attributing to extensive apoptosis in early MDS. Highly deregulated cytokine signaling in the bone marrow samples of MDS contributes to the extensive apoptosis and also, a possible hematopoietic arrest resulting in refractory anemia. In addition, the dysregulation of cytokine expression contributes to genomic alteration resulting in MDS progression to acute myeloid leukemia (AML).

Myelodysplastic syndromes (MDS) are clonal disorders characterized ineffective hematopoiesis and subsequent progression to acute myeloid leukemia (AML) [1]. Among the subtypes of MDS, refractory anemia (RA) and refractory anemia with ringed sideroblasts exhibits ineffective hematopoiesis consistently [2-4]. However, an apparent paradox in early MDS is that these disorders presents with peripheral cytopenia, despite having normo or hypercellular bone marrow. This inconsistency could be explained by the premature programmed cell death of a large numbers of cells in the BM before they enter the peripheral system. This signifies an unfavorable bone marrow microenvironment for cell proliferation and maturation in early MDS, unlike in leukemia where the cell proliferation exceeds apoptosis and the marrow environment favors cell division [5,6].

Although it is well established that MDS arises from an intrinsic or acquired genetic defect in hematopoietic stem cells leading to clonal expansion of a stem cell population; it has also been suggested that other epigenetic abnormalities such as aberrant cytokine production, altered stem cell adhesion, or an abnormal marrow microenvironment might contribute to the disease biology [7,8].

While decades of studies have revealed few consistent cytogenetic abnormalities by; cases without abnormalities are widely observed in myelodysplasia especially in early MDS subtypes, more in RA and RARS compared to RAEB and RAEB-t [9]. A high apoptotic rate, despite the absence of a genetic abnormality in MDS marrow prompted to focus on evaluating apoptotic mediators like cytokines in MDS. Initial studies comparing marrow stromal fibroblasts/ macrophages from MDS patients revealed greater levels of TNF-α and interleukin-6 (IL-6) secretion than in the controls [10]. Though TNF-α has been suggested to play a dual role of inducing apoptosis in maturing cells and stimulating proliferation of primitive progenitor cells, TNF-α produced by MDS mononuclear cells was inhibitory to both normal and MDS colony growth. This indicated that residual normal hematopoiesis could also be blocked in MDS [10]. In addition, TNF-α has been known to up-regulate fas (CD95) expression, a cell surface protein that triggers apoptosis upon binding fas-ligand (Fas-L) [11].

Extensive studies on cytokines such as IFN-γ and TGF-β that are secreted by stromal cells have also been implicated in initiating apoptosis, but their role in MDS is yet to be established [12,13]. Experimental studies on TGF-β revealed that it is a cell type dependent mediator of apoptosis, implying that cytokines could trigger apoptosis in multiple pathways [14]. Apart from cytokines, transcription factors NFκB family regulate genes involved in inflammation [15], immune response, cell survival [16-23] and is also known to suppress apoptosis [20,21]. Constitutive activation of NFκB has been reported in various solid tumors and hematologic malignancies and aberrant expression of NFκB family proteins has been described for other B- and T-cell neoplasia [22-26]. Though, NFκB has been suggested as contributing factor between inflammation and cancer through TNF-α, the mechanism remains to be explored.

Therefore, studying the levels of pro-apoptotic molecules in the marrow of early MDS patients might enable better understanding of the disease and its underlying cause. Hence this study was aimed at estimating the bone marrow apoptotic rate and correlating it with the levels of pro-inflammatory cytokines.

Bone marrow aspirate was obtained from MDS-RA patients (n=35, mean age of 40.8 years) and acute myeloid leukemia (AML) (n=10, mean age of 39 years). The specimens were included into the study after a confirmed diagnosis of MDS-RA on bone marrow studies with inter-observer concordance. MDS-RA was considered when the patients presented with de-novo MDS and not secondary to AML therapy. The patients were excluded from the study if they were treated with steroids or anti-inflammatory drugs. The specimens were collected in EDTA vacutainers with prior approval from the institutional ethical committee and informed consent from the participants of this study. The nucleated cells were isolated and both the apoptotic assay and RNA extraction were carried out immediately.

The specimens were layered over an equal volume of Ficoll Histopaque 10771 (Sigma, India) and centrifuged at 2500rpm for 20 mins. The buffy coat comprising of nucleated cells were then carefully transferred and washed with sterile phosphate buffered saline (PBS). After an 18 hour cell culture to enrich the blast cells from normal nucleated cells, aliquots of the cell pellet were used for both apoptotic analysis and RNA isolation.

Apoptosis was measured using Annexin V kit (Abcam, India). The cells were resuspended in 300 μL of 1X Annexin V binding buffer, 3 μL of Annexin V-FITC and 3 μl of Propidium iodide and incubated at room temperature for 5 mins in dark. The cell suspension was then washed with Annexin binding buffer and analyzed under fluorescence microscopy. About 500 cells were scored for each sample and the overall percentages of apoptosis in each group were calculated. The ‘t’ test was used to compare the significance of apoptosis between MDSRA and AML group.

Total RNA was extracted using TRIzol. 500 μL of TRIzol reagent was added to the cell pellet, and incubated at room temperature (RT) for 5 mins before 200 μL of chloroform was added. The suspension was vortexed and incubated for 5 mins at RT and centrifuged at 10000rpm for 10 mins. The RNA was precipitated from the clear supernatant with 1 mL of isopropyl alcohol; air dried and dissolved in RNAase free water. Finally, the RNA was quantified using spectrophotometer and stored at -80°C.

cDNA was synthesized from 5 μg of the extracted RNA using high capacity cDNA reverse transcription kit (Applied Biosystems, India) as per the manufacturer’s protocol and stored at 4°C until further analysis.

Real time PCR was optimized to our laboratory conditions using 1 μL of cDNA for a 20 μL reaction. All reactions were carried out using SybrGreen PCR master mix from ABI. A known control DNA was included in every reaction to exclude the baseline DNA amplification of SybrGreen. The cytokine levels of GAPDH, TNFα, TNFR1, TNFR2, TGF-β1, TGF-β2, TGF-β3, Fas-L, Fas-R, INF-γ, NFκB1, NFκB2, NFκB3 were estimated using primer sequence, mentioned in Table 1. The Ct-threshold was set at 0.01 for all the cytokines including the internal reference control (GAPDH) and the ‘ct-value’ for each sample was obtained. The ‘ct-value’ of each cytokine was then converted to “relative expression level (REL)” using “delta-delta Ct method” and significance of each cytokine level between the groups was calculated using chi square test. 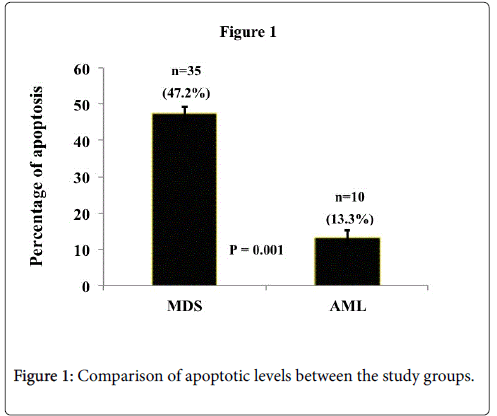 Figure 1: Comparison of apoptotic levels between the study groups. 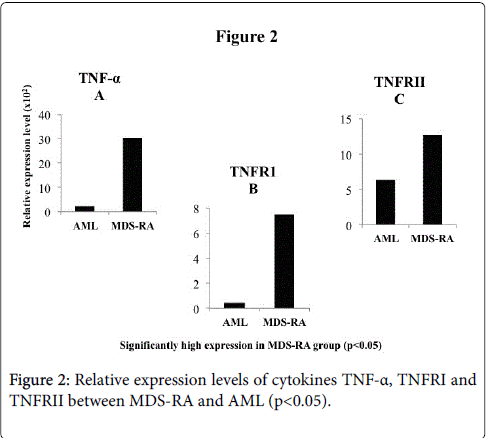 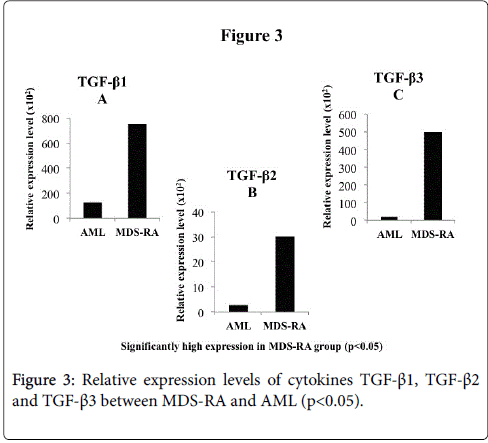 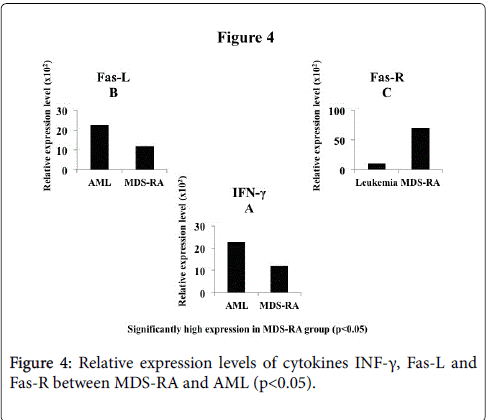 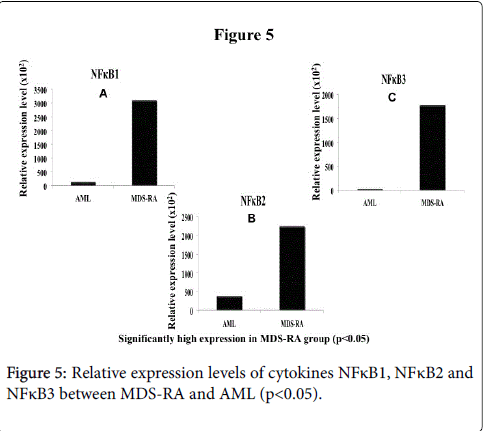 Earlier studies have established that the apoptotic pathway in MDSRA is triggered as a natural defense to an unknown initial molecular insult on a hematopoietic cell [27-45] and hence, this study was extended to investigate the expression levels of cytokines involved in triggering apoptosis along with NFκB that regulates cytokine transcription. In concurrence with earlier studies, a higher rate of apoptosis was observed in MDS-RA patients than that of the AML patients. Among the cytokines studied, over expression of TNF-α in MDS-RA patients (p<0.05) was observed along with their receptor genes TNFRI and II, studies on the role of high TNFR expression have observed that they facilitate Fas expression, which triggers apoptosis through both mitochondrial and caspase pathways [28]. In concurrence, this study also observed a significant Fas ligand expression, as observed by Gupta et al in the marrow of MDS group [35]. In addition to the Fas ligand, an increased expression of the fas receptor (CD95) is observed which is a cell surface protein that induces apoptosis upon binding to fas -ligand and increased activity of caspase-3 in bone marrow from MDS patients [11].

Studies on the effect of Fas molecules over expression have known to upregulate the expression of interferon (IFN) molecules. These INF molecules are known to have a negative impact on the hematopoietic activity by hampering cell division resulting in hematopoietic arrest [36-38]. Remarkably, this study has observed that the INF-γ molecule was significantly high in MDS-RA group compared to the AML group, indicating a possible hematopoietic arrest, which likely contributes to the hypocellularity observed in MDS-RA pathology. Hence the observation of increased apoptosis in this study, along with hematopoietic arrest conceivably underlines the cause for an impaired cellular differentiation and dysplasia in the marrow compartment of the MDS-RA subset. While apoptosis initiated by cytokine molecule TNF-α is evident in the MDS-RA group, increased expressions of TGF- β subtypes were observed. TGF-β is known to trigger apoptosis independently by Smad pathway and also by activation of Fas-R without affecting its cognate Fas-L , leading to caspase-8 activation and apoptosis [39-41] implying that a similar mechanism of apoptosis could be mediated.

Furthermore, this study revealed high expression levels of NFκB in MDS-RA group which is a ubiquitously expressed transcription factor that controls immune response and inflammation regulating apoptosis, cell proliferation, and differentiation [42] through TNF-α related apoptosis inducing ligand (TRAIL) and Fas [43,44]. Also studies reveal that the secretion of TNF-α by macrophages, apart from triggering apoptosis by itself [46], mediates NFκB transcription that actively initiates the transcription of pro-apoptotic cytokines such as TGF-β [17].

However, the low apoptotic rate and a correspondingly lower expression of cytokines observed in AML samples maybe due to disease progression in leukemia where, unlike in MDS-RA, the leukemic cells suffer genetic alterations resulting in either loss of tumor suppressor activity, gain of oncogenic activity or both.

This study divulges the overexpression of TNF-α, TNFRI, TNFRII and NFκB in MDS-RA samples that warrants the reason for the high apoptotic rate observed in the MDS-RA marrows. In addition, high expression of Fas and TGF-β implies triggering of multiple apoptotic pathways and a potential hematopoietic arrest by IFN-γ. These microenvironment changes and cytokine dysfunction contributes to the disease pathogenesis of MDS-RA. Although functional aspect of each cytokine in this study has not been established, their association in extensive apoptosis and an ill-defined anemic condition of MDS-RA cannot be disregarded since most of these MDS-RA patients especially when certain subset of patients respond well to cytokine targeted therapies [47]. Further, functional studies with knockout gene models of these cytokines in MDS conditions will provide a greater insight into the disease pathogenesis and subsequently assist in effective management of early MDS disease.

I thank the Dean of faculties, ethical board members of Madras Medical College and Sri Ramachandra University for granting permission to collect bone marrow samples from patients who visited the institutions.

Copyright: © 2016 Venkateswaran N, et al. This is an open-access article distributed under the terms of the Creative Commons Attribution License, which permits unrestricted use, distribution, and reproduction in any medium, provided the original author and source are credited.