One Poisoning Can Hide Another

One Poisoning Can Hide Another

In July 2008, in Besancon, France, a 56-year-old homeless man was exposed to smoke for nearly 15 minutes following a building fire.

He presented with burns on both hands, soot on his skin and in his endocavities (mouth, nostrils), and blood pressure of 166/112 mm Hg. The initial electrocardiogram showed no repolarization disorder, only sinus tachycardia recorded at 139 cycles/ min. The patient showed minor neurological signs: he was agitated (Glasgow Coma Scale score of 14) and his respiratory rate was normal (18 breaths/ min).

A first pre-hospital determination of venous lactate was carried out using a portable instrument. This initial venous lactate level was equal to 12.9 mmol/L. The patient was immediately administered 5 g of hydroxocobalamin IV before being transferred to hospital.

Blood gas measurements performed on arrival at the hospital were pH 7.30, pCO2 4.36 kPa, pO2 6.9 kPa, and SpCO 23.6%. The anion gap was 23 mmol/ L (Na+ 136 mmol/L, Cl- 97 mmol/L, HCO3- 16 mmol/L). The immediate determination of blood lactate levels in the context of smoke inhalation in this patient, who presented with carbon monoxide poisoning but without hypotension, justified the strong suspicion of concomitant cyanide intoxication and the administration of antidotal treatment.

In the emergency department, a second determination of venous lactate was carried out (9.42 mmol/L). In view of this persistently high level of lactate, another administration of 5 g of hydroxocobalamin was administered. The administration of 10g of hydroxocobalamin normalised the level of lactates (2.8 mmol/L). The patient improved and was discharged without sequelae.

Venous blood samples were taken to determine blood cyanide levels. In contrast to carbon monoxide, there is no rapid detection method for Hydrogen Cyanide (HCN) in the blood and it is not possible to have cyanide poisoning confirmed at the scene of a fire. Three determinations of blood cyanide levels were carried out, which retrospectively confirmed severe cyanide poisoning: the first cyanide reading was high, equal to 3,049 μg/L (the LC 50 of cyanide is 2,500 μg/L). The two other cyanide levels, after 5 g and 10 g of hydroxocobalamin were 688 μg/L and 136 μg/L respectively, which demonstrates the efficacy of the antidotal treatment (Figure 1). 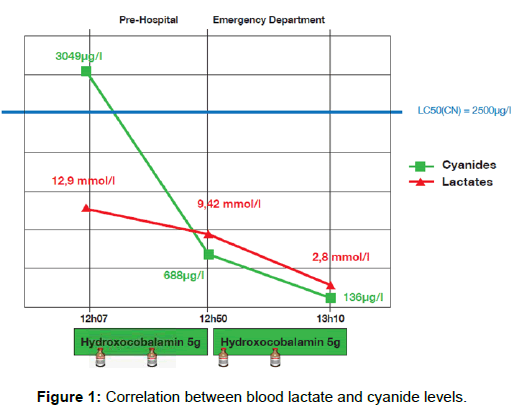 There is a significant correlation between blood cyanide concentrations and venous lactate in fire victims as shown by Baud et al. [2,3] Lactate concentrations above 10 mmol/L are a sensitive indicator of cyanide poisoning in these specific conditions. More recently, a group of European experts has proposed emergency management protocols for cyanide toxicity in smoke inhalation victims using serial lactate measurements [4].

While cyanide measurements made it possible to confirm cyanide poisoning retrospectively, repeated determinations of blood lactate levels made it possible to direct antidotal treatment. The correlation between lactate levels and hydroxocobalamin efficacy showed that it was necessary to repeat the administration of the antidote after the starting dose of 5 g of hydroxocobalamin.

Copyright: © 2013 Fortin JL, et al. This is an open-access article distributed under the terms of the Creative Commons Attribution License, which permits unrestricted use, distribution, and reproduction in any medium, provided the original author and source are credited.