CyBorD is one of the most effective triplet regimens for both transplant-eligible and ineligible patients with multiple myeloma. In comparison, once-weekly bortezomib induction therapy with a reduced dosage of dexamethasone (modified-CyBorD) showed less toxicity but an equally high response rate. However, this modification still resulted in bortezomib-induced PN in more than half of patients. We therefore introduced a once-weekly schedule of bortezomib combined with continuous low-dose oral cyclophosphamide and reduced dosage of dexamethasone (reduced-CyBorD) in transplantineligible patients with multiple myeloma in our hospital. A total of 32 patients, including 20 who were newly diagnosed and 12 who were refractory/resistant, were treated with reduced-CyBorD, and the regimen’s efficacy and safety were evaluated. The median age was 72 years; 17 patients were male and 15 were female. The overall response rate was 90.6% with 43.8% complete response/near complete response. The median progression-free and overall survival was 14.9 months and 43 months, respectively. Three patients (9.4%) developed grade 1 peripheral neuropathy, and no patients had to reduce or discontinue bortezomib. In conclusion, our results suggested that this reduced combination therapy might be a safe and effective approach in transplant-ineligible patients with multiple myeloma.

The treatment of multiple myeloma (MM) has evolved significantly over the past decade. Novel agents, including thalidomide, bortezomib, and lenalidomide, have contributed to considerable improvements in response rate, progression-free survival (PFS), and overall survival (OS) [1]. To date, numerous combination therapies, some including these novel agents, have been studied to evaluate their efficacy and safety [2]. The phase 3 VISTA trial showed that bortezomib, melphalan, and prednisone (VMP) was significantly superior to MP in transplant-ineligible patients [3]. Based on the VISTA trial results, VMP was considered to be a new standard regimen for initial induction therapy in newly diagnosed transplant-ineligible patients with MM. In 2009, Reeder et al. reported that the three-drug combination of cyclophosphamide, bortezomib, and dexamethasone (CyBorD) was a highly active regimen for the treatment of patients with MM [4]. However, the twice-weekly schedule of bortezomib and high-dose dexamethasone caused significant toxicities, including PN and thrombotic events. In 2010, the same group showed that onceweekly bortezomib induction therapy with reduced-dose dexamethasone (modified-CyBorD) had less toxicity than the original regimen but an equally high response rate [5]. However, it was revealed that half of the patients receiving this modified regimen still developed bortezomib-induced PN (BiPN). The purpose of this article is to report the efficacy and safety of reduced-dose CyBorD regimen (reduced- CyBorD) in the treatment of transplant-ineligible patients with MM in our institute.

From 2009 to 2012, 32 transplant-ineligible patients with MM were enrolled in this study. The patients consist of two groups, the patients relapsed after or resisted prior at least one conventional treatment, and the newly diagnosed patients who had more than one poor prognostic factor including ISS stage III, renal impairment, extramedullary lesion, poor cytogenetic abnormality, multiple bone lytic lesions. Of these, 20 patients were newly diagnosed and 12 were relapsed or refractory. The protocol consisted of bortezomib given intravenously or subcutaneously at a dose of 1.3 mg/m2 once a week on days 1, 8, and 15; cyclophosphamide orally at a dose of 50 mg daily on days 1-21; and dexamethasone orally or intravenously at a dose of 20 mg daily on days 1, 2, 8, 9, 15, and 16 every 28 days. Acyclovir (200 mg/day for 1 week in each cycle) was routinely prescribed to patients as prophylaxis for herpes zoster infection. Reduced-CyBorD therapy was continued up to eight cycles until patients achieved the best possible response and entered the plateau phase or disease progression. The plateau phase was defined as at least 3 months of clinical stability and stable paraprotein levels (within ± 25%) regardless of the degree of percentage decrement of M protein. Responses were assessed according to modified European Group for Blood and Marrow Transplantation criteria [6]. Data for OS and PFS were analyzed by 30 September, 2016. PFS was defined as the period from the data of initiation of reduced-CyBorD to the date of the first assessment of disease progression or the date of death for patients without disease progression. OS was calculated from the initiation of reduced-CyBorD to the last date of patient follow-up or the date of death from any cause. Adverse events were graded according to the National Cancer Institute’s Common Terminology Criteria for Adverse Events (CTCAE), version 4.0.

Patients’ characteristics are shown in Table 1.

The median age was 72 years (range, 62 to 88). Fourteen patients (44%) were over age 75. All patients had symptomatic disease, and 15 patients were female. According to the ISS, four patients were classified in stage I, 10 were in II, and 18 were in III. Fluorescence in-situ hybridization cytogenetic analysis of the myeloma cell population in marrow aspirates revealed deletion 13 in 6/24 (25%) cases, t(4;14) in 2/24 (8%), t(11;14) in 4/24 (16%), and t(14;16) in 1/24 (4%). The median number of cycles administered was six (range, two to eight). Twenty-one of 32 patients completed eight cycles or achieved confirmed complete response/near complete response (CR/nCR). Eleven patients terminated prematurely, three because of stable disease, five because of AEs, and three for other reasons. The median follow-up time in surviving patients was 61.5 months (range, 47.6 to 83.1). Response data are summarized in Table 2.

Table 2: Response rate according to the age group 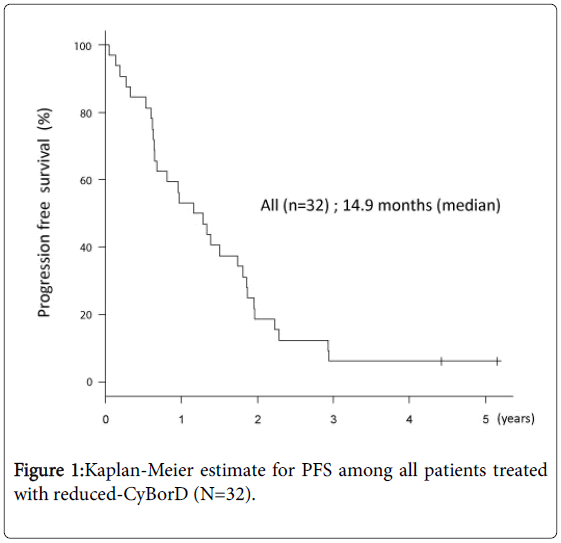 Figure 1: Kaplan-Meier estimate for PFS among all patients treated with reduced-CyBorD (N=32). 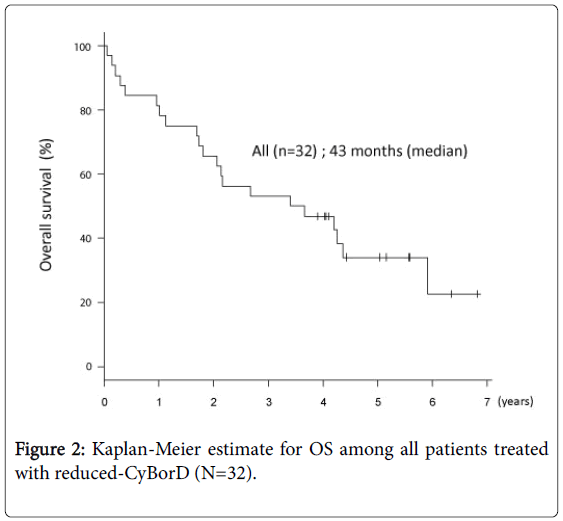 Figure 2: Kaplan-Meier estimate for OS among all patients treated with reduced-CyBorD (N=32).

Novel agents such as bortezomib, lenalidomide, and thalidomide have been added to alkylating drugs to improve response and survival in both newly diagnosed and relapsed/refractory patients [1]. Alkylating drugs, such as melphalan and cyclophosphamide, have been shown to be quite effective in MM, and several investigations revealed that bortezomib might act in synergy with them in vitro [7,8]. Recently, however, serious concerns were raised about the possibility of second malignancies caused by extended exposure to melphalan. Further, early use of melphalan is thought to damage bone marrow stem cells and often causes poor stem cell mobilization for autologous peripheral blood stem cell transplantation in transplant-eligible patients with MM. Given these circumstances, CyBorD is thought to be one of the most useful options for both transplant-eligible and - ineligible patients with MM.

The standard CyBorD regimen has shown CR/nCR rate of 39%, and VGPR or better of 61% after four cycles. However, a relatively high frequency of severe AEs, including PN, was reported, and the regimen was altered to once-weekly bortezomib with low-dose dexamethasone.

This modified CyBorD has shown fewer toxicities and retained efficacy in newly diagnosed patients with MM. In spite of this modification, it was found that more than half of patients still developed PN (of any grade), grade 3 AEs of any type occurred in onethird of patients, and the dose reduction of bortezomib was performed in 13% of patients [5].

These results suggest that this modified regimen is not tolerable due to AEs, especially in frail elderly patients. In our experience, reduced- CyBorD produced a rapid reduction of M protein within the second month.

All patients received the same dose of bortezomib throughout the study and remained on schedule, suggesting that the treatment was relatively well tolerated in elderly patients. In this study, all 32 patients were evaluable for response, and half of the patients (16/32) completed more than six cycles.

Furthermore, patients over age 75 did not show inferior outcomes relative to those under age 75, suggesting that reduced-CyBorD might be suitable for transplant-ineligible patients, especially frail elderly patients (over age 75) with MM [9,10]. Further, AEs of grade 3 or 4 were observed less than 20% of patients; these comprised neutropenia, lymphocytopenia, thrombocytopenia, and pneumonia. Notably, bortezomib induced only grade 1 PN in our series, in just 18.8% of patients, and did not result in bortezomib discontinuation. These results suggest that this reduced-CyBorD regimen retained a high response rate with a lower frequency of adverse events compared to standard and modified CyBorD. Recently, continuous treatment with novel agents until disease progression or development of intolerance was found to be critical for greater response, and extended both PFS and OS [11-13]. Further, this combination positively impacted the quality of life of elderly patients and reduced health care costs. In conclusion, our study clearly showed that reduced-CyBorD positively impacted the outcomes of transplant-ineligible patients, including frail elderly patients over age 75. This suggests that reduced-CyBorD may be a viable standard option for frail elderly patients with MM.

Copyright: © 2017 Yagi H, et al. This is an open-access article distributed under the terms of the Creative Commons Attribution License, which permits unrestricted use, distribution, and reproduction in any medium, provided the original author and source are credited.