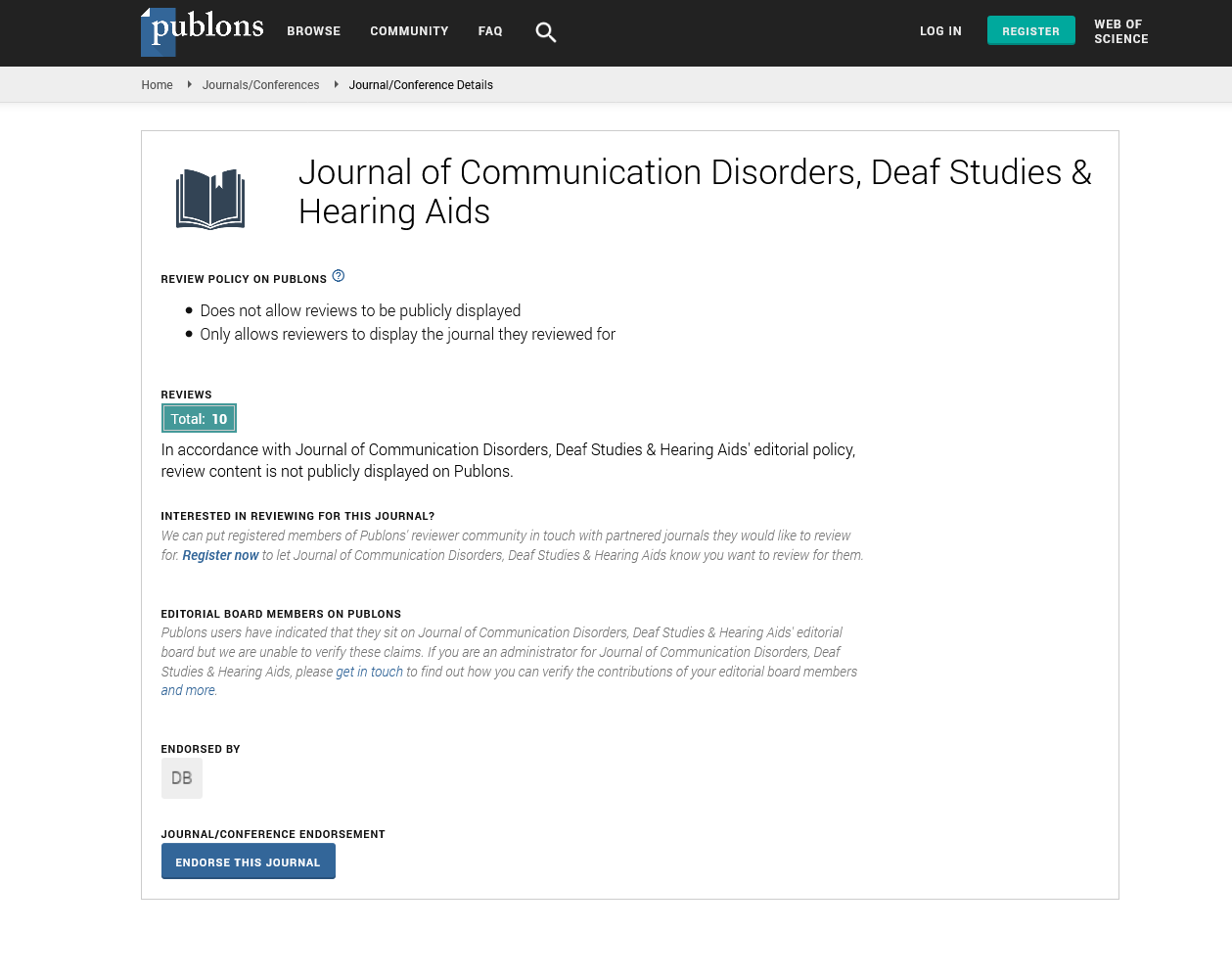 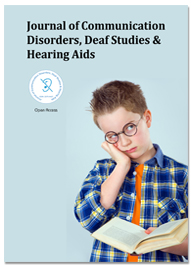 Background: Cigarette smoking and its physiologic effect is well documented in clinical literature. Other audiologic studies have equally established a link between smoking and auditory disorders.

Materials and methods: A total of forty (40) healthy male university students of age range 18-24 and mean of 21 voluntarily participated in the study. Audiometric findings of seven smokers age-matched with thirty-three nonsmokers were examined in the study. A researcher designed questionnaire, ‘Audiological Profile of Chronic Cigarette Smokers Questionnaire’ (APCCSQ) was administered on all the volunteer participants after its face and content validity had been ascertained by a faculty member who is independent of the study. Audiometric test was conducted in a standard double chamber IAC Acoustics AudioMetric booth of <35 dB background noise (ANSI S3.1-1991 specification). Each participant had otologic examination using Welch Allyn Digital Macro-View Video Otoscope, diagnostic pure tone audiometry using GSI 61 calibrated to ANSI (2004) specification. Participants also had middle ear examination using an up to date calibrated GSI 39 autotymp at 226 Hz probe tone. Only those with Tympanogram ‘A’ and otoscopic clearance were allowed to participate in the study.

Results: Generally, audiometric findings in both groups were within normal limits but non-smokers were found to have a better hearing sensitivity than smokers when averages of audiometric thresholds were calculated. Another key observation was that threshold of hearing appeared to be slightly elevated in the higher frequencies of 4 and 8 KHz among smokers in comparison to non-smokers. The bar charts clearly show this.

According to Dawes smoking may represent a significant cause of hearing loss worldwide [1]. It is found that the more packets one smokes per week and the longer one smokes, the greater the risk of hearing damage. Over 164,000 adults were studied in the UK and finding revealed that those who currently smoke have a 15.1 percentage (15.1%) higher chance of hearing loss. In the same study, it was opined that second-hand smokers or so-called passive smokers equally stand the risk, especially, if exposed for more than 10 hours per week may have a 40% risk of hearing loss.

Literature on smoking and its effect have long established that adolescents and children of mothers who smoked during pregnancy are vulnerable. High incidence of otitis media in young children whose parents smoke have equally been documented in comparison to those whose parents are nonsmokers. This incidence of otitis media may not be unrelated to irritation of the Eustachian tube and mucosa of the middle ear.

Blood flow and oxygen are both extremely important in maintaining healthy hair cells in the cochlea but nicotine and carbon monoxide contained in cigarette have been implicated in the depletion of oxygen levels and constriction of blood vessels all over the body including the auditory system.

Simply put, nicotine is classified to be ototoxic. In addition, nicotine can cause tinnitus, dizziness and vertigo. According to a blog, bloomhearing, nicotine interfers with neurotransmitters in the auditory nerve [2]. Neurotransmitters, are responsible for telling the brain which sound an individual is hearing. This interference can cause tinnitus, dizziness and vertigo.

Debbie clearly states that nicotine interferes with neurotransmitters in the auditory nerve which are responsible for telling the brains which sound you are hearing [3]. Further to this, it’s also stated that smoking increases not only sensitivity to loud noises which may result in a smoker developing noiseinduced hearing loss, nicotine also damages cells in the body turning them into free radicals that are capable of damaging the DNA and causing diseases.

Katbamna has cited evidence of nicotine effect on neurotransmitters [4]. According to this author, when smoking combines with factors of noise exposure and age, a serious and irreversible hearing loss may be expected. Pouryaghoub corroborated this finding in their study where it’s reported that smoking and occupational noise interaction exacerbates hearing loss [5]. Although in two other independent studies, Mizoue and Palmer smoking is said to independently affect hearing loss [6,7].

Forty (40) healthy male students of age range of 18-24 and a mean of 21 were recruited to participate in this study. Seven (7) chronic smokers and thirty-three (33) non-smokers volunteered to participate in the study. Each subject was given a questionnaire made-up of twenty four items (Audiological Profile of Chronic Cigarette Smokers Questionnaire–APCCSQ) to fill. Each questionnaire contained biography information, smoking or non-smoking status, average sticks of cigarette smoked per day, duration of smoking, pastime activities such as listening to loud music, ear/hearing health history including past incidence of tinnitus and vertigo, general medical/drug history, knowledge of effect of nicotine on health and hearing in particular.

Those with minimum of three years history of smoking and average of ten (10) sticks of cigarette per day were recruited into the study. Those who reported past history of ear diseases, surgery, listening to loud music or exposure to any high decibel noise level as well as those on medications that may have a potential of compromising the auditory system were excluded from participation.

Those found with occluding cerumen within the ear canals and abnormal tympanometric findings taking into account James Jerger’s classifications of ‘A’ (normal) ‘B’, ‘C’, ‘As’ and ‘Ad’ for abnormal were excluded from the study.

Pure tone audiometric test was carried out using a baseline of <25 dBHL as normal threshold across frequencies 0.5-8 KHz in a sound-proof audiometric room of the college of applied medical sciences of King Saud University.

Audiometric pattern of Smokers (S) and Non-Smokers (NS) found to be generally within normal limits of 25 dBHL but in threshold sensitivity across board non-smokers presented a better hearing compared to smokers (0-10 dBHL; 10-25 dBHL) (Tables 1 and 2). 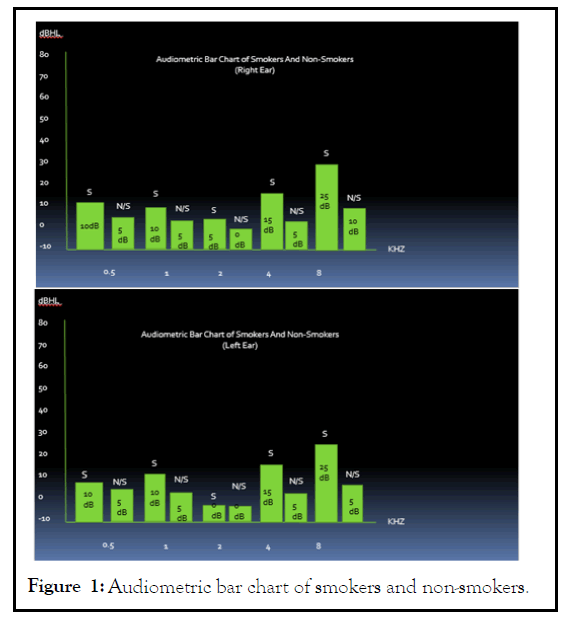 Physiologically, it may not be out of place to assume that the base of the cochlea in smokers may be under some sort of metabolic stress thereby in a state of gradual compromise. It is clinically common to observe higher frequency hearing loss in cases of ototoxicity of which nicotine is so classified. This observation may be suggestive of gradual loss of hearing sensitivity at the basal end of the cochlea. The finding is found to be in consonance with other studies [1,9-11].

Meanwhile, audiometric threshold elevation as documented in other studies on smokers lends some measure of credence to the findings of this audiometric study. Chang discovered in their study that cigarette smoking increases hearing impairment and that it equally affects hearing thresholds [12]. Kumar found a similar correlation in their hospital based study on effect of smoking on the hearing status [13].

Paschoal and de Azevedo reported that smoking has an adverse effect on the auditory system on the basis of high frequency audiometric and oto-acoustic studies conducted on a sample of one hundred and forty-four (144) gender-mix adults [14]. Nair opined that pathological auditory involvement was clearly evident in smokers as an indication of reduced hearing sensitivity in the higher frequencies pure tone audiometric test of smokers [15]. These authors also reported implication of outer hair cells of the cochlea in a Distortion Product Oto- Acoustic Emission (DPOAE) findings.

Ohgami found a correlation between light smokers and high frequency hearing loss in young adults [9]. In an unpublished study in a Saudi Population Ahmed found that without the noise component, effect of smoking is negative [16]. This finding has been debunked by some other studies such as Mazoue and Palmer publications [6,7]. In this study, all participants reported zero exposure to noise yet an indication of minimal but audiometrically significant elevated thresholds on the higher frequencies among smokers was found in comparison to those of non-smokers who can be classified ‘super-normal’ in hearing. All sampled subjects claimed knowledge of health hazards of smoking but higher percentage (>70%) did not link smoking to any possible negative hearing impact [17,18].

There’s no conflicting findings on smoking and effects on hearing in several publications, it may however sound expedient for audiology clinicians to consider among other things an addition of tobacco use in the case history of adult patients. While it is agreeable that this study has very few sample subjects on smoking and lack statistical analysis of finding, simple audiometric pattern tend to loosely indicate a correlation between smoking and hearing effect.

It may equally be essential to include in general community hearing screening programme examination of people who admit to long-term cigarette smoking and also extend to them the privilege of periodic auditory sensitivity test, perhaps on a biannual basis while those with combined noise exposure and smoking should be scheduled for quarterly appointment or less.

Counselling sessions in audiologic practice must equally view the need for transmission of adequate information on the effect of smoking not only on general health but also on the auditory system to both chronic and passive (secondary) smokers.

However, in a future study objective test instruments such as diagnostic Oto-Acoustic Emission (OAE), Auditory Brain-stem Response (ABR) which are not included in this study due to their non-availability, must be considered. The good news, however, is the conclusion drawn by Hu which indicate that excess risk of hearing loss associated with smoking disappears in a relatively short period after quitting. Dawes study corroborates this finding. In a similar gender-based study Wang, states that after adjusting for covariates it was found that current smokers and past smokers middle-aged males had a significantly higher prevalence of speech-frequency loss and high frequency hearing loss. Slightly elevated high frequency threshold in this study among smokers tend to be in resonance with Wang finding.

Copyright: © 2021 Owolawi WO, et al. This is an open-access article distributed under the terms of the Creative Commons Attribution License, which permits unrestricted use, distribution, and reproduction in any medium, provided the original author and source are credited.