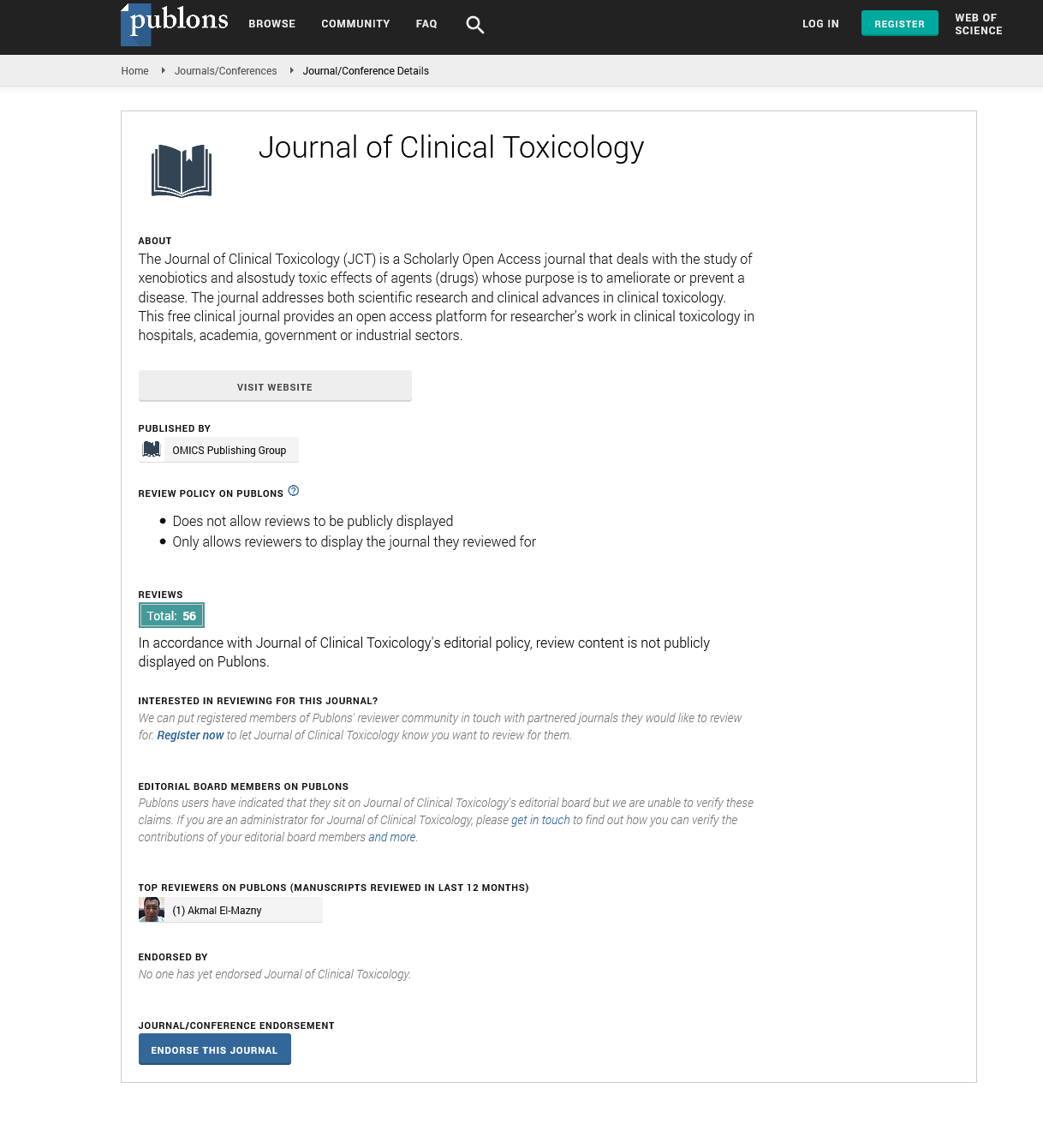 Parquet (1, 1’-dimethyl-4-4’-bipyridinium dichloride), an agricultural herbicide, is highly toxic to humans. A 78% mortality rate previously reported for the ingestion of 20% Paraquat commercial preparation. No specific antidote is available; hence cases of poisoning require aggressive decontamination. We report an unintentional ingestion of a 15- months-old male who developed severe neurologic manifestations. Clinical experiences were seen; in vitro and animal models often demonstrate a lack of consistency with clinical response.

A previously healthy 15 months old boy presented to the Emergency Department (ED) with vomiting, two hours after incidental ingestion of an unknown amount of Paraquat containing herbicide (brand name 'Bren') [1]. On arrival to the ED, he was fully conscious, with normal vital signs and oxygen saturation 99% in Room Air (RA).

Due to extremely high initial Paraquat levels in both blood and urine, predicting poor prognosis and high risk for mortality according to the Hart nomograms, he was treated with a loading dose of N-acetylcysteine and immediately transferred to a pediatric tertiary care facility. Upon arrival, he was conscious with mild drooling; oxygen saturation in RA was 90%. Endoscopy of the upper gastrointestinal tract demonstrated superficial erythematotic lesions in the oral mucosa and mild esophagitis and gastritis. Renal dialysis was initiated, and multi agent pharmacological treatment commenced, consisting of high dose corticosteroids (1 mg/kg of Dexamethasone), Nacetylcysteine (NAC), esomeprazole and anti-oxidative therapy with vitamins C and E. These were all maintained throughout most of the hospitalization.

Enteral feeding was withheld and Total Parenteral Nutrition (TPN) administered for the first 12 days of admission, after which a 'second look' endoscopy was undertaken following one session of hemodialysis upon arrival to our ICU (a four hours cycle, started 6 hours post ingestion). Paraquat plasma level at 30 hours post exposure was 149 mcg/liter. During the first week of admission, reversible acute kidney injury was noted (maximal creatinine level was 1.27 mg/dl on the 5th day post ingestion). Due to episodic hypoxia down to 85% in RA, associated with mild tachypnea and coarse bilateral breath sounds, cautious oxygen supplementation was delivered via nasal cannula for the first week of admission, aiming to achieve a target saturation of 90%. Chest radiographs indicated increased broncho-vascular markings in the peri-hilar regions with mild fleeting infiltrates centrally on both sides.

Neurologically, during the first week of admission the infant was mildly lethargic and less communicative with episodes of agitation. During the second week he gradually deteriorated with loss of eye contact, progressive axial hypotonic and weak tendon reflexes. Episodes of agitation became more frequent. No convulsions were recorded. Eventually, on post-exposure days 12-20 the boy failed to display any intentional motor activity. He became extremely hypotonic and poorly responsive to the environment, clinically suggesting severe encephalopathy. No epileptic activity was demonstrated on EEG. Brain MRI on postexposure day 18 demonstrated mild diffuse parenchymal loss. On Fluid Attenuated Inversion Recovery (FLAIR) images, foci of high signals were seen in the white matter, especially posterior periventricular, but also in the deep and subcortical zones. The lesions were symmetrical, involving all lobes, more prominent in the posterior parietal and occipital regions. Minimal involvement of the cortex was seen in the occipital and temporal lobes. No enhancement or signs of hemorrhage were detected. On Diffusion-Weighted Magnetic Resonance Imaging (DWI or DW-MRI), restriction was seen along the central tegmental tracts. These findings were reported as compatible with Reversible Posterior Leukoencephalopathy Syndrome (RPLS) (Figures 1-3). Figure 3: Axial cut. Diffusion-Weighted Magnetic Resonance Imaging (DWI or DW-MRI) at the level of the pons. Restricted diffusion in the central tegmental tracts is seen (arrows).

Liver transaminases, bilirubin, coagulation, serum electrolytes remained within the normal range throughout the admission. The acute kidney injury was completely reversible on the 9th day of admission [2]. Lumbar puncture demonstrated normal glucose and protein levels, no pleocytosis and sterile cultures. No Paraquat was detected in the cerebro-spinal fluid on postexposure day 15. Brain-stem Evoked Response Audiometry (BERA) and Visual Evoked Potential (VEP) were normal. By approximately three weeks post ingestion, oxygen saturations in RA had completely normalized, and chest radiographs had normalized. Due to his satisfactory respiratory status, no CT was performed to evaluate for possible evidence of pulmonary fibrosis. In view of this reassuring development and considering that Rapamycin treatment has been associated with RPLS in the literature [3,4]. The latter was discontinued on post-exposure day 19, following a total of 11 days of treatment.

Remarkably, neurologic improvement was noted within a couple of days of Rapamycin discontinuation, culminating in complete recovery within a period of two weeks. The boy was discharged on post-exposure day 33 with normal physical and neurologic examination and no clinical evidence of pulmonary disease. On follow-up visits two and six months after the event, he had resumed normal physical activities and no neurological or respiratory symptoms were reported. Physical examination revealed no abnormalities, in particular with no signs of pulmonary or neurological compromise. Chest radiographs were normal. Due to complete clinical recovery, the parents refused follow-up neuro-imaging studies at 6 months post exposure. At 18 months post exposure, a further telephone follow up was undertaken and the parents once again assured that there were no concerns about his health and development.

Due to the toxicity of superoxide radicals, oxygen treatment is considered contra-indicated, as it is thought to feed into this process. Other treatment modalities are limited and eventually, lung transplantation might be the only therapeutic option for severe pulmonary fibrosis. In this case, the high initial Paraquat plasma concentration indicated poor prognosis with 80% predicted mortality. The option of proactive ECMO treatment was considered, aiming to minimize additional lung injury mediated by mechanical ventilation and supplementary oxygen, in case of respiratory deterioration. Since lung transplantation was not realistic due to the child's young age, we searched the literature for potential protective therapies to counter the development of pulmonary fibrosis. Immunosuppressive treatment with high dose cyclophosphamide was considered but owing to the risks of deep immunosuppression in a young boy, and the conflicting evidence with regard to its effectiveness in Paraquat poisoning, it was not administered [7].

Rapamycin is a triene antibiotic produced by Streptomyces hygroscopic us, a treptomycete species. It forms a complex with the intracellular protein FKBP 12, which blocks the activation of the cell-cycle-specific kinase, mTOR. This inhibition blocks IL2 mediated signal transduction pathways that prevent cell cycle progression from G1 to S phase in T cells, hence its antiproliferative effects on fibroblasts and lymphoid cells [8]. These anti-fibrinogenic properties have been shown to mitigate Paraquat induced lung injury in several in vitro and in vivo animal studies 10-13. To date, only 2 cases of Rapamycin treatment in human Paraquat poisoning have been described. A 27 year old man with progressive respiratory symptoms and hypoxia. He was started on Rapamycin on hospital day 12, on day 39 the patient’s resting pulse oximetry level was 90% on 2 L of oxygen via nasal cannula. He was able to perform basic activities of daily living and was discharged on day 396. A 50 year old man who attempted suicide with PQ, with plasma concentration indicating 100% predicted mortality. He was started on Rapamycin on day 4, but by day 18 he succumbed to respiratory failure caused by severe pulmonary fibrosis [8]. The authors attributed the treatment failure to the very large amount of Paraquat the patient had ingested, as reflected by the high plasma levels even 72 post ingestion, and to the specific formulation the patient ingested. Our patient was treated with Rapamycin between days 8 and 19 post intoxication. Overall, he experienced a relatively benign course of respiratory injury, only requiring supplemental oxygen, which could be weaned during the Rapamycin treatment period; no long term pulmonary sequelae were observed. Neurologic injury was noted prior to rapamycin treatment onset, with progression during the treatment period and resolution following its discontinuation. Objective evidence was seen on neuroimaging, and complete clinical resolution occurred within several weeks, without any specific therapeutic intervention.

Few studies have addressed neurological involvement in acute Paraquat poisoning reported five cases with Paraquat-induced convulsions, accompanied by multi organ failure and death, all within the first week of exposure reported a 12 year old boy with seizures [9,10]. Studied the neuroimaging findings of 53 patients following Paraquat poisoning. Twenty-six patients had Magnetic Resonance Imaging (MRI) scans during the acute phase (3-16 days after ingestion). Abnormal findings were reported in only two adult patients, both had presented with seizures on day 10 and 16 after poisoning. Cortical and subcortical high signals were seen on T2 and Fluid Attenuated Inversion Recovery (FLAIR) as well as involvement of the basal ganglia in one of the patients [11]. The abnormal signals were present in both the frontal and parieto-occipital regions. In our patient, white matter involvement included subcortical areas as well, but was most prominent in the periventricular area. To the best of our knowledge, data regarding MRI findings in this condition is scarce and has been described only in the above mentioned two patients. It is perceivable that the spectrum of findings may be larger. Furthermore, due to the child's young age and concurrent presence of unmyelinated white matter, the selective vulnerability to Paraquat may be different and more extensive than in adults. In fact, we saw abnormality of the central tegmental tracts which is a nonspecific sign of diffuse injury in the young age [12]. In the context of neurological deterioration under Rapamycin treatment, RPLS could not be excluded, as a typical RPLS may symmetrically involve all regions of the brain including all white matter zones [13].

Due to the nature of this single case report, and the paucity of information regarding Paraquat poisoning and Rapamycin treatment, it is difficult to confidently determine the role of Rapamycin, both with regards to its potential for prevention of pulmonary fibrosis and contribution to neurologic injury. However, considering the high plasma Paraquat levels, timely association of neurological damage and full recovery, further studies are required to determine the safety and efficacy of rapamycin in human Paraquat poisoning.

We are grateful to Drs. Andrew Dawson and Nicholas Buckley, The University of Sydney, for discussing with us the issue of ECMO in Paraquat poisoning, and their advices.

Copyright: © 2021 Zioni I, et al. This is an open-access article distributed under the terms of the Creative Commons Attribution License, which permits unrestricted use, distribution, and reproduction in any medium, provided the original author and source are credited.