Background: Neonatal mortality remains a major contributor to death among children younger than 5 years in developing countries. It accounts for approximately 40% of all childhood mortality in resource-poor countries. Each year, 7 million neonates globally are stillborn or dying within 30 days of birth (neonatal period). Reducing Neonatal mortality requires that interventions be readily accessible and available in the immediate perinatal period. Such countries have weak health metrics and systems, resulting in a paucity of perinatal and neonatal mortality information and a deficiency in quality of available data. Objective: This study was undertaken to determine the neonatal mortality rate (NMR) and perinatal mortality rate (PMR), causes of death, and associated risk factors among hospital live births admitted to the NICU of Misurata teaching hospital in Libya. Methods: A descriptive, retrospective study based on hospital files records. From January 2013 to December 2013, information was collected from the registration book at labour room including operating theatre and newborn admitted in the neonatal intensive care unit of Misurata teaching hospital in Libya. The information collected include, history, clinical examination, investigation, treatment and outcome.

Neonatal mortality accounts for approximately 40% of all childhood mortality in resource-poor countries. The first 28 days of life are a vulnerable period when infants are highly susceptible to illness and death [1].

Almost all (99%) of the neonatal deaths occur in developing countries, with two thirds occurring in Africa and South East Asia because of poverty and poor access to health services. However, is that the causes of most neonatal deaths are largely preventable [2].

In many Western societies the death of a child is a rare event, mostly occurring in hospital, and usually in an intensive care setting [3].

Among the major causes of neonatal death, attention has focused on birth asphyxia, and sepsis. Reducing deaths from these causes requires that interventions be readily accessible and, for asphyxia, available in the immediate perinatal period [1].

In the 2000 United Nations Millennium Summit the international community committed to reducing the child, newborn and maternal mortality as part of the Millennium Development Goals (MDGs). The fourth goal (MDG4) sets to reduce deaths of children under age 5 by 66% by 2015 [4].

Millennium Development Goal [4] has encouraged efforts to reduce child mortality. Substantial decreases in deaths in children younger than 5 years old have been due to reductions in postneonatal mortality. No similar progress has been made in the reduction of neonatal mortality. The most effective interventions for reducing neonatal mortality are well established and consensus has been reached for the scaling-up of the continuum of care [6].

Most of the neonatal deaths in developing countries are not recorded in formal vital registration systems; hence, data mostly reported in published literature and technical reports are estimates from national demographic surveys [2].

Neonatal outcome is important indicator of obstetrics and health care. It is estimated that effective implementation and high coverage of interventions could prevent up to 70% of neonatal deaths globally [7].

PNMR are used as indicator of quality of antenatal and perinatal care. Yet uncritical application of this indicator in international comparison can be misleading. The perinatal mortality rate depends on number of factors and important determinant that need to be assessed separately before reaching conclusions about quality of care issues [7].

In Libya, available data on neonatal mortality are scanty; so this retrospective study was, therefore, undertaken to assess the magnitude of the problem and identify associated factors and causes. The data generated may inform the formulation of appropriate preventive measures and policies to reduce NMR and consequently give support to decision makers.

A descriptive, retrospective study based on hospital files records. From January 2013 to December 2013, information was collected from admitted newborn in neonatal unit and the registration records at labour room including operating theatre. The information collected include, history, clinical examination, investigation, treatment and outcome.

Criteria of admission in neonate department of Misurata Central Hospital.

• Presence of respiratory distress signs whatever the birth weight or gestational age or audible respiratory sounds as congenital stridor.

• Reluctant to feed or persistent vomiting

In our study the following definitions were adapted

Live birth is the complete expulsion or extraction from its mothers of a product of conception, irrespective of the duration of the pregnancy, which, after such separation, breathes or shows any other evidence of life, such as beating of the heart, pulsation of the umbilical cord, or definite movement of voluntary muscles, whether or not the umbilical cord has been cut or the placenta is attached; each product of such a birth is considered liveborn.

Stillbirth is death prior to the complete expulsion or extraction from its mother of a product of conception, after 22-24 completed weeks of gestation; the death is indicated by the fact that after such separation the fetus does not breathe or show any other evidence of life, such as beating of the heart, pulsation of the umbilical cord or definite movement of voluntary muscles.

The perinatal period commences at 22 completed weeks of gestation and ends seven completed days after birth.

The neonatal period begins with birth and ends 28 complete days after birth. Neonatal deaths may be subdivided into early neonatal deaths, occurring during the first seven days of life (0-6 days).

Statistical analysis: The collected data was analyzed using (SPSS) statistical software program (Version 18), and displayed in appropriate tables and graphs. Data was summarized and expressed as frequency and percentage. Significance of difference was tested by chi-square test and the results is considered significant when P ≤ 0.05 (Figure 1). 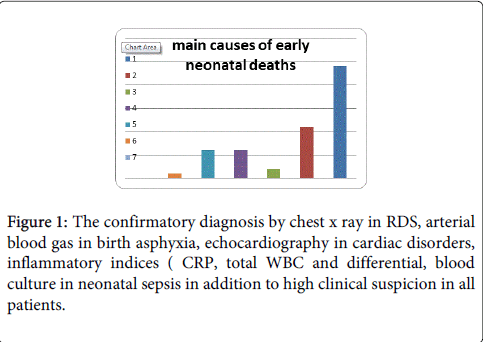 Regarding the presence of maternal risk factors associated with neonatal death, there are higher neonatal deaths among neonates borne to mothers with antipartum hemorrhage and diabetic mothers (10% and 8%) respectively (Table 2).

Table 4: Neonatal deaths according to mode of delivery.

The ratio of nurse to newborn was 1:4.

Neonatal mortality continues to be a significant public health burden. Over the last 2 decades, improvements in perinatal and neonatal care have led to great success in the survival of the smallest infants. Despite these advances, it is important that we continue to identify characteristics associated with perinatal and neonatal mortality as well as to develop a proper interventions [8].

This study was carried out as a retrospective record based study to determine the burden and factors associated with an increased risk for perinatal mortality and neonatal mortality among neonates admitted to NICU of Misurata teaching hospital in Libya 2013.

While the lowest rates occur in countries that have widespread access to modern obstetrics; Perinatal mortality rate (per 1000) for Denmark, Finland, France, Germany, Japan, Netherlands, United kingdom and United states are (8, 6, 7, 6, 7, 8, 8 and 7 per 1000) respectively [15].

The disparity in PMR and NMR across countries had always existed and had been attributed to lack of equity in the distribution of health care facilities [16] Not surprisingly, third world nations have the highest rates of perinatal mortality. The Ivory Coast has the dubious distinction of the highest perinatal mortality rate at 96/1000.

Contrary to the well-documented survival advantage of female babies over males, this study showed no significant sex difference in mortality. Studies from different countries, however, showed variations in sex difference in mortality [17,18] These discrepancies suggest that health-seeking behavior may differ according to local cultural factors and highlight the importance of designing interventions based on the understanding of local customs and attitudes toward the newborn.

More than half (66%) of the neonatal deaths in this study occurred among LBW infants <2.5 kg with a higher risk of death among preterm <37 week gestational (about 71%) compared with term babies, which corresponds to the findings from studies in Nigeria [17,18] and sub-Saharan Africa [19,20]. Although numerically small, ELBW infants represent nearly 50% of all perinatal mortality. 8 Globally, each year, an estimated 13 million infants are born before 37 completed weeks of gestation. Complications from these preterm births are the leading direct cause and major risk factor for neonatal mortality [21].

Improving survival of LBW infants and preterm may be readily achieved even at the community level by low technology essential newborn care interventions aimed at providing warmth, adequate nutrition, and prevention of infection. These strategies have been shown to successfully reduce newborn deaths in other developing countries with weak health care systems and low health care service utilization [22,23].

Also in our study, there is higher neonatal deaths among neonates borne to mothers with antipartum hemorrhage, diabetic mothers and Poly hydramnios (10%, 8% and 5%) respectively, while this increased rate is not statistically significant. These factors predispose the newborn to significant risk of neonatal deaths globally [9]. Lack of ANC may be an important factor associated with neonatal death as poor supervision of pregnancy and failure to prevent, detect, and treat maternal illnesses increase the risk to the baby. It is, therefore, crucial to identify and address the factors militating against proper utilization of the few available health facilities to significantly reduce neonatal mortality.

The need for an improvement in the obstetric care of mothers and neonatal resuscitation skills in this environment is very important as Respiratory distress syndrome and Neonatal sepsis continues to be a leading cause of death in early neonatal life (48% and 12%) respectively.

Regarding to the mode of delivery, our study showed no statistical significant difference in the neonatal deaths among those delivered by normal vaginal delivery and those delivered by Cesarean section. However, prior population-based studies have found a significant association between vaginal delivery and neonatal mortality [26,27]. Redman and Gonik [20] reported significantly lower mortality rates in 22- and 23-week infants delivered by cesarean section, compared with vaginal delivery. The risk of neonatal mortality may not actually be due to mode of delivery but rather related to physicians’ unwillingness to intervene aggressively on behalf of the fetus, such as classic cesarean section, antenatal steroids, neonatal resuscitation, and other therapeutic modalities, especially if they perceive the infant to be too young or too small to survive [26,28]

This study provides a reliable indication of where efforts and additional resources should be deployed for maximum impact on reducing NMR. These include good ANC coverage, prevention of perinatal asphyxia, and training on the care of preterm as well as LBW deliveries. Training in neonatal resuscitation skills and provision of basic resuscitation equipment, as well as implementation of roll policies to reduce preterm and LBW deliveries are all feasible within the existing framework of even primary health care delivery.

Further studies are also suggested to identify the factors responsible for increased the risk of neonatal death.

In conclusion, neonatal mortality remains high in this environment because of the lack of ANC, intrapartum complications, asphyxia, prematurity, LBW, neonatal sepsis and congenital anomalies. Targetting these causes of perinatal mortality is very important issues to reduce the perinatal mortality rate. Appropriate perinatal and neonatal care requires an integrated and holistic program of intervention at various levels. Interventions must not only include health-related measures that have a direct bearing on perinatal and/or neonatal outcomes but several other ancillary measures of equal importance. These measures include poverty alleviation; improved opportunities for female education. Introduction of community/home-based care for pregnant mothers and newborns within the existing health care setup as well as immediate scaling up and the uptake of the integrated maternal newborn and child health care strategy is needed. The results of this study emphasize the importance of health systems research and also may facilitate dialogue with policy makers about the importance of investing in neonatal health.

2.Preventing and improving recognition and management of birth asphyxia.

3.Preventing and improving recognition and management of infections:

4.There is an urgent need to identify how the burden and severity of maternal infections relate to perinatal outcomes.

6.Improving information on the magnitude and causes of neonatal mortality.

7.Development of indicators and simple management tools (Guidelines) for assessing and monitoring health system performance for perinatal and newborn care at the national level.

Copyright: © 2015 Alburke S, et al. This is an open-access article distributed under the terms of the Creative Commons Attribution License, which permits unrestricted use, distribution, and reproduction in any medium, provided the original author and source are credited.