Prostate cancer is the most common malignancy in American men and metastases are responsible for most prostate cancer mortality. Cancer metastasis is a multistep process in which the tumor microenvironment plays a role to promote aggressive cancer cell behavior [1,2]. Inflammatory stimuli, especially involving macrophages and their accompanying cytokines are increasingly recognized factors that can promote cancer progression, but how this occurs is not fully understood [1-6].

The invasion assay was performed by adding 50,000 [3H] Thymidine (GE Healthcare Bio-Sciences, Piscataway, NJ) pulselabeled cells to the upper chamber coated with 35 μg Matrigel (Becton Dickinson, Lincoln Park, NJ) separated from the lower chamber by 8 μm pores in Transwell chamber plates (Costar, Corning, NY) [32]. The effect of human monocytes on prostate cancer cell invasion was tested using Matrigel-coated Transwell chambers as previously described [31,32,36,37]. The cancer cell invasion assay was cultured with or without 10,000 U-937 or THP-1 monocytoid cell lines (ATCC) or 20,000 human peripheral blood monocytes added to the lower chamber. The cells were cultured in RPMI 1640 medium supplemented with 10% fetal bovine serum [31,36]. The cell invasion assays were tested in triplicate and each experiment was performed 3 or more times. In this assay, the 3H-thymidine labeled cancer cells that passed through the Matrigel membrane into the lower Transwell chamber were counted and compared to the total number of labeled cells. The percentage of invaded cells in the lower chamber was determined by multiplying by 100, the cell associated 3H-thymidine cpm (recovered from each lower chamber by trypsinization) divided by the total cell-associated cpm initially added to each chamber. The relative percent invasion was normalized to that of PC-3 High Invasion cells not receiving co-culture stimulation with monocytes. The percent invasion was not affected by cell proliferation or viability as determined by viable cell counts in the MTT assay [32].

Extracts were made from the cancer cells grown to 70-80% confluence by incubating with cell extraction buffer containing protease inhibitor cocktail at 4°C.

The IL-6, IL-8, Gro-α and CCL2 ELISA assay kits were obtained from eBioscience, Inc. San Diego, CA. The cytokine ELISA was performed per manufacturer’s instructions. Briefly, the cell supernatants or cell extracts were incubated in the assay plate which was pre-coated with the appropriate capture antibody. The samples were added in duplicate and incubated at room temperature (24°C) for 3 hours. The wells were washed 5 times and after the last wash, the wells were incubated with anti-CCL2 detection antibody diluted 1:250 for 1 hour. The wells were washed 5 times and then incubated with Avidin-horseradish peroxidase diluted 1:250 for 1 hour. The wells were washed and incubated with 100 μL of TMB (3,3',5,5'- tetramethylbenzidine) substrate solution at room temperature for 10 minutes. The color development on the plate was monitored and the substrate reaction stopped by adding 100 μL of 2N H2SO4 stop solution into each well. The absorbance was read within 30 minutes at 450 nm on a Biotek Synergy H4 hybrid multi-mode microplate reader.

Cell extracts were prepared by microextraction [31]. Chemiluminescent NF-κB p65 Transcription Factor Assay Kit (Thermo Scientific Pierce, Rockford, lL). Briefly, the prostate cancer cell nuclear extracts were incubated in the assay plate coated with NF- κB oligonucleotides with binding buffer for 1 hour with mild agitation. The plate was then washed three times, followed by addition of 100 μL of anti p65 primary antibody. The plate was incubated for 1 hour with the primary antibody without agitation and was again washed followed by incubation with diluted secondary antibody for 1 hour without incubation. The plate was washed again, followed by incubation with 100 μL of chemiluminescent substrate. The chemiluminescence signals were read using a Biotek Synergy H4 hybrid multi-mode microplate reader within 10 minutes of adding the chemiluminescent substrate. Positive control wells were also incubated with wild-type and mutant oligonucleotides to establish the specificity of the NF-κB DNA binding signals. The results are reported as NF-κB luminescence signal units. To determine the NF-κB activity of PC-3 cells following transfection with pCMV 4-3 HA IκBα S32/36A or pCMV 4-3 HA control vector, NF-κB luciferase activity and electrophoretic mobility shift assays (EMSA) were used as previously described [31].

The Vybrant MTT cell proliferation assay kit (Molecular Probes, Eugene, OR) was used to measure cell proliferation as previously described [32,37]. To create a standard curve for viable cell number, the MTT signal was determined in parallel for viable prostate cancer cells seeded from 10,000 to 80,000 viable cells per well in a 96 well plate. The MTT signals were plotted against cell counts and viable cell number. The cancer cells were cultured in four wells and the viable cancer cell counts were determined from the standard curve. Parallel determinations of cell number and viability were made by counting cells on a hemocytometer slide using the trypan blue exclusion technique. 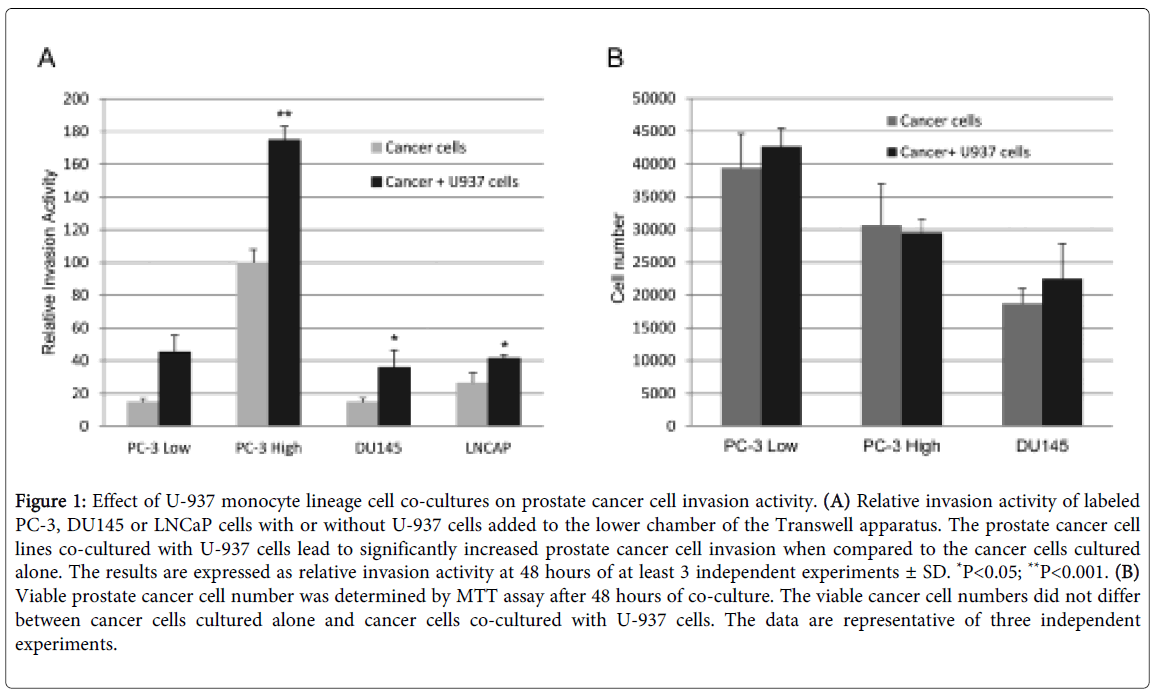 Cytokines are differentially expressed in the prostate cancer/ monocyte co-cultures. When PC-3 cells were co-cultured with U-937 or THP-1 monocytelineage cells their invasion activity was significantly increased above PC-3 control cells (Figure 5A). The co-cultured PC-3 cell invasion was inhibited towards control in the presence of anti-CCL2 neutralizing antibodies but not isotype controls (Figure 5A). Recombinant human CCL2 protein added to the lower well of the Transwell apparatus caused dose-dependent stimulation of PC-3 prostate cancer cell invasion (Figure 5B). The optimal PC-3 invasion occurred at 3 to 10 ng/mL added CCL2 protein. Interestingly, addition of high levels of CCL2 at 20 and 30 ng/mL did not stimulate prostate cancer cell invasion. Addition of recombinant CCL2 protein stimulated PC-3 invasion similar to the U-937 co-cultures (Figure 5C). The role of CCL2 in U-937-induced PC-3 High Invasive cell invasion activity was tested with biochemical inhibitors (Figure 6A). Treatment with CCR2 inhibitor RS102895 reduced PC-3 invasion from 197 to 85 percent. Co-culture induced PC-3 invasion was also inhibited by treatment with Bay11-7082 (selective irreversible NF-κB inhibitor) and with Lactacystin (selective 20S proteosome inhibitor). The EGF signaling pathway was tested because EGF paracrine signaling was shown in some models to stimulate cancer cell invasion [7,8]. The EGFR inhibitor gefitinib did not inhibit PC-3 invasion in the co-cultures (Figure 6A). Bay11-7082 treatment inhibited CCL2 levels from 576 pg/mL to 224 pg/mL in the control co-cultures. Similarly, lactacystin inhibited CCL2 levels down to 287 pg/mL (Figure 6B). However, CCL2 levels in the co-culture supernatants were not significantly inhibited by treatment with RS102895 or gefitinib (Figure 6B). Figure 6: Effect of biochemical inhibitors on PC-3 High Invasive prostate cancer cell invasion activity and CCL2 levels in the co-culture with U-937 cells. (A) Prostate cancer cell invasion induced by co-culture with U-937 cells was inhibited with addition of Bay11-7082, Lactacystin and RS102895, but not with gefitinib. (B) CCL2 levels in co-culture supernatants were significantly reduced with Bay11-7082 or Lactacystin treatments, but not with RS102895 or gefitinib inhibitors. The data shown is expressed as the mean ± SD of three independent experiments. *P<0.05, **P<0.01, ***P<0.001, PC-3 High Invasive/U-937 versus with inhibitor or PC-3 High Invasive alone. Figure 7: Prostate cancer cell invasion and NF-κB activity in co-cultures. (A) The percent nuclear NF-κB was significantly induced in PC-3 High Invasive prostate cancer cells co-cultured with U-937 monocytes versus alone. (B) Relative PC-3 invasion in co-culture with U-937 cells was reduced from 196 ± 7 to 151 ± 12 percent by transfection with dominant negative IκBαS32/36A versus control vector. (C) Dose dependent nuclear NF-κB DNA binding activity was induced in PC-3 High Invasive cells following incubation with recombinant human CCL2 for 24 hours. (D) The CCL2 induced PC-3 High Invasive cell NF-κB activity was reduced when the cells were treated with anti-CCL2 neutralizing antibodies. The data are expressed as the mean ± SD of three independent experiments. *P<0.05, **P<0.01. CCL2 is produced by stromal cells, osteoblasts, endothelial and cancer cells in the microenvironment and can stimulate monocyte recruitment, osteoclast maturation and cancer cell growth and survival [21]. CCL2 is expressed in clinical prostate cancer tissues and its expression has been correlated with Gleason’s score and pathological stage [15,22,41]. Prostate cancer cells also express the primary CCL2 receptor, CCR2, which was increased on prostate cancer cells during clinical progression [22,42,43]. In the present study, the prostate cancer cells and co-cultures also expressed high levels of IL-6, IL-8 and Gro-α; however, only CCL2 levels increased significantly in the cocultures with monocytes. It is not known why Gro-alpha and IL-6 levels were lower in the co-cultured cells by ELISA when the cytokine array showed higher levels of these factors. It is possible that the cytokine ELISA did not confirm the increased expression of Gro-alpha and IL-6 in the co-cultures due to analytical variation in the assays.

Copyright: © 2015 Lindholm PF, et al. This is an open-access article distributed under the terms of the Creative Commons Attribution License, which permits unrestricted use, distribution, and reproduction in any medium, provided the original author and source are credited.
Top