Solanum tuberosum ssp. (Andigena) possesses good processing, health attributes and potential genetic diversity for breeding. However, they are handicapped by low yields due to large vegetative growth and loads of tubers per plant. This field study examined the consequences of canopy manipulation on S. andigena tuber yield, dry matter partitioning and water use efficiency (WUE) under limited and unlimited water and nitrogen (N) environment. The experiment was conducted at Massey University, Palmerston North, New Zealand from October 2010 to April 2011 comparing canopy manipulations subjected to two water and N regimes in a RCBD split-split plot design with four replicates. Solanum andigena ssp known as Tutaekuri was mechanically topped and foliar sprayed with CCC for 25-50 days from planting compared to a normal growing as a control. The water regimes were irrigation and rain-fed while applied. Topping and spray of CCC improved water use, tuber yield and WUE by increasing partitioning of dry matter to the roots and tubers. The 25-30 CCC schedule and mechanical topping adapted plants to water stress by partitioning more assimilates to the roots while 25-50 CCC schedule impeded roots development. Exclusion of N enhanced WUE while irrigation had no effect on WUE. The study suggested that excessive vegetative growth is responsible for low yields and low WUE in S. andigena and that it can be reversed by mechanical topping and CCC spray and N exclusion.

The Solanum tuberosum L. subsp. andigena (Hawkes) cultivar known as Tutaekuri or Urenika in New Zealand is a distinctive heritage potato cultivar, Taewa. It is the most widely cultivated heritage potato in New Zealand. Its tubers are elongated with a dark purple skin and they have a very flourly flesh which fragments when boiled. The Solanum andigena plant also exhibits long stolons, very deep eyes, late tuberisation, large shoot biomass, many branches, many small tubers per plant and insensitivity to full irrigation compared to modern potato cultivars. Researchers described Tutaekuri as one of the heritage cultivars still exhibiting the true ancestral characteristics of the Andean potatoes. Solanum andigena also possess high antioxidant activity, high tuber dry matter content and specific gravity as observed in Tutaekuri [1,2]. However, S. andigena is handicapped by small tuber size and low yields. The high above-ground biomass suggests that S. andigena has the potential for yield improvement, through the manipulation of its shoot biomass. It was hypothesised that S. andigena species utilizes a greater proportion of assimilates for aboveground dry matter production, rather than for tubers. Subsequent reduction of the leaf canopy, either by application of growth regulatory hormones or mechanical control, would stimulate increased allocation of assimilates to tubers. This field experiment examined the consequences of mechanical topping and CCC foliar application on dry matter partitioning, tuber yield and water use efficiency in S. andegina var. Tutaekuri, under limited and unlimited water and N environments [3]. The purpose for this study was to improve the yield of Solanum tuberosum ssp. Andigena.

• Normal growth as a control (NGC)

• Application of CCC (2-chloroethyltrimethyl-ammonium chloride (2000 ppm), twice during the tuber initiation stage at 25 and 30 days after plant emergence (DAE), coded as 25-30 CCC

• Chlorocholine chloride was applied using a backpack sprayer at 350 liters of water per hectare.

The irrigation treatment received 25 mm irrigation at 30 mm soil moisture deficit (SMD). Irrigation was applied by Trail boom traveller irrigator. Crop water use, for irrigated and rainfed treatments, was determined by the soil water balance approach [4]. All plots (3 m by 1.5 m each) received 30 kg P and 75 kg (at planting) of Potash Super 30% fertilizer applied. The treatment received urea (as a side dressing). Mounding (for plants at 75 cm between rows and 30 cm spacing within rows, at a depth of 10-15 cm), followed side dressing on the same day. Weeding and plant protection were carried out accordingly.

The above-ground (leaves and stems) and below-ground biomass (roots and tubers) were sampled to determine the effect of leaf canopy manipulation on partitioning of dry matter to leaves, stems, roots or stolons and tubers. One small and one large plant sample was carefully uprooted from each plot using a spade. They were partitioned into leaves, stems, roots and tubers and then weighed and oven dried, until there was no further weight loss. The contribution of each component to total biomass on dry matter basis was determined as the ratio of each partition to total biomass (leaves, stems, roots and tubers) per plant [5,6]. The HI was calculated as the ratio of total tuber dry matter to total biomass on dry matter basis from the five samples of each plot. Leaf area (was determined using a leaf area meter), plant height (cm) and number of stems and their diameter (mm) were measured at physiological maturity. Potato psyllid was visually scored on a scale of 0-5, with 0 representing no infection and 5 being the highest infections, per experimental unit. Volumetric soil moisture was monitored using a TDR. Water use efficiency was determined as the ratio of total tuber yield to actual crop water use.

Data on tuber yield and yield components were measured at harvest. These data and those on the physiological characteristics were analyzed with the GLM procedure of the SAS differences amongst treatment means were compared by the LSD, at the 5% probability level [7]. 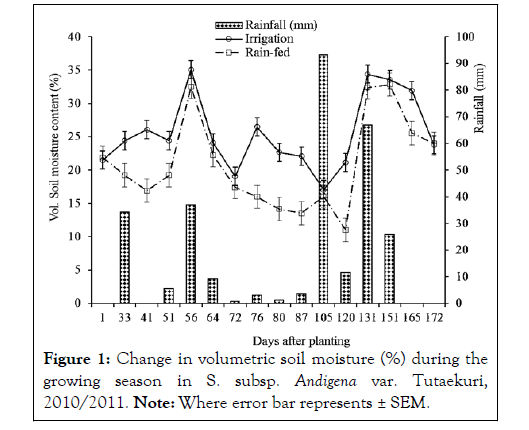 Canopy manipulation significantly affected plant height and the number of branches per plant. Mechanical topping of the canopy significantly reduced plant height, whilst application of CCC on different days reduced it intermediately, compared to the control which had the greatest plant height.

Plants treated with CCC managed to assimilate more dry matter to the tuber than mechanical topping, by reducing LAI, plant height and number of branches [11]. Apart from reducing excess plant height and LAI, mechanical topping concurrently increased the partitioning of dry matter to auxiliary branches and stems, thereby partially reducing its allocation to tubers, compared to the level of CCC. The current study suggests that various growing shoots in S. subsp. andigena var. Tutaekuri have powerful sinks that result in competition with the belowground sinks and tubers, when regulating the partitioning of assimilates. Spraying of CCC on leaves and the mechanical topping of growing shoots enhances the redirection of dry matter assimilates, from the excessive growing shoots to the tubers. Canopy manipulation induced S. subsp. andigena var. Tutaekuri to respond to irrigation, through increased stem size and partitioning of dry matter to roots and tubers. Irrigation and large vegetative growth increases soil moisture and relative humidity, thereby creating a desirable micro-climate environment for pests and disease incidence. Consequently, canopy manipulation minimised the N effect of decreasing dry matter partitioning to the tuber, through the rearrangement of assimilate distribution to the tubers. However, a combination of N and canopy management is an ideal strategy for S. subsp. andigena var. Tutaekuri optimum translocation of assimilates to tubers.

All canopy manipulation treatments achieved high tuber yield, by increasing the number of tubers per plant and HI. This study implies that obstruction of excessive shoot growth in S. subsp. Andigena var. Tutaekuri enhances photoassimilates partitioning into tubers, thereby boosting tuber growth. CCC promotes tuberisation by reducing the level of gibberellins, which are reported to inhibit tuber formation and which promote vegetative growth in S. andegina. On the other hand, this study indicated that higher number of tubers per plant in modified crops than control did not affect tuber yield, which was never reported in referred studies.

The study has examined the consequences of mechanical topping and foliar application of growth regulator and compared it with normal growth on tuber yield and WUE in S. subsp. andigena var. The results indicate that both growth regulator schedules and mechanical topping reduced excessive vegetative growth, whilst increasing the translocation of dry matter to the tubers, compared to the control but with different mechanisms. Irrigation facilitated assimilation to tubers whilst the addition of N reduced HI, due to increased and excessive vegetative growth. The results also suggest that the management of canopy increases the total tuber yield. It is recommended that farmers should be managing the canopy of S. subsp. andigena in order to optimise its crop water use and tuber productivity.

Copyright: © 2022 Fandika I. This is an open-access article distributed under the terms of the Creative Commons Attribution License, which permits unrestricted use, distribution, and reproduction in any medium, provided the original author and source are credited.