Background: Familial Mediterranean fever (FMF) is an auto-inflammatory systemic disease, of an autosomal recessive inheritance, that is characterized by recurrent episodes of fever, peritonitis, pleuritis, pericarditis, and/or arthritis; MEFV is the responsible gene.

Aim: To detect the correlation of Mean Platelet Volume (MPV) and splenomegaly as subclinical inflammatory markers in children with FMF at the attack-free periods.

Methods: This cross-sectional study included 40 pediatric patients diagnosed clinically and according to gene mutations already with FMF and were following-up at the Rheumatology Outpatient Clinic, Children's Hospital, Cairo University. Abdominal ultrasonography was done all patients to detect splenomegaly; MPV was measured as well.

Conclusion: MPV and splenomegaly could serve as markers of chronic inflammatory activity in FMF patients even during the attack-free period; these may be applied for chronic inflammatory markers that may be related to the prognosis and the possibility of development of amyloidosis.

Familial Mediterranean fever (FMF) is an auto-inflammatory disease, inherited in an autosomal recessive pattern; however, many patients with only one mutation were clinically diagnosed with FMF and responded well to colchicine therapy [1,2]. FMF is characterized by recurrent attacks of fever, peritonitis, pleuritis, pericarditis, arthritis, and sometimes an erysipelas-like erythema (ELE) [3]. The acute inflammatory attack is usually short and lasts 1 to 3 days and then subsides spontaneously. In some occasions, the attacks are prolonged, last more than 1 week and present with arthritis, sacroilitis or persistent febrile myalgia. Most children with FMF remain symptom-free in between the attack [4]. In about 30% of patients, the inflammation persists even in the attack-free periods with subtle clinical inflammatory signs (e.g. chronic normocytic normochromic anemia, splenomegaly, persistently elevated erythrocyte sedimentation rate (ESR), and growth retardation) reflecting persistent subclinical inflammation and chronic immune activation [5]. Interlukein-6 (IL-6) has been reported to be higher in FMF patients than controls during the attack-free periods. IL-6 promotes megakaryocyte maturation and possibly stimulates megakaryocyte proliferation [6]. The spleen acts as a reservoir for platelets and about one third of the circulating platelet is temporarily sequestered within a normal sized spleen, and up to 90% may be found within a markedly enlarged spleen [7]. Changes of peripheral platelet volume depend on the rate of splenic sequestration and bone marrow production; Mean Platelet Volume (MPV) is increased if the rate of platelets destruction is equal to or higher than the rate of their production, as a result of increased peripheral immature platelets [8]. The aim of this study was to detect the correlation of MPV and splenomegaly as subclinical inflammatory markers in children with FMF during the attack-free periods.

This cross-sectional study included 40 children with FMF, during their regular follow-up at the Rheumatology Clinic, Specialized Pediatric Hospital, Cairo University during the period from April 2012 to October 2012. FMF was diagnosed according to Tel Hashomer criteria [9].

Included cases were subjected to detailed history and examination, and their medical records were reviewed, stressing on: consanguinity, family history of FMF, age of disease onset, time interval between onset and the diagnosis, number of attacks per year, clinical manifestations, severity according to FMF severity score [10], and colchicine dose to control attacks and response to treatment: attack free, incomplete (decline more than 50% in frequency of attacks) and unresponsive.

Results of mutation analysis were collected from records. A panel of 12 common MEFV gene mutations was tested; DNA was extracted from patients whole blood using conventional phenol-chloroform extraction method, then using a reverse hybridization, test strip-based assay (FMF StripAssay; ViennaLab Labordiagnostika, Vienna, Austria). Patients were either homozygous: gene mutation on both alleles, or heterozygous: gene mutation on one allele only, or gene negative: no mutations could be identified.

Complete blood count (CBC), ESR, C-reactive protein (CRP), and liver and kidney function tests were done. MPV was measured in a blood sample collected in citrate (1:1 v/v) in order to avoid the platelet swelling induced by EDTA, and analyzed within 1 hour. A Cell-Dyn 3700 was used for whole blood counts. Normal range of mean platelet volume was used. Results of urine analysis were collected to detect the presence of any abnormalities especially proteinuria or hematuria.

Abdominal ultrasonography was done for all patients to detect the presence of splenomegaly using Toshiba and General electric apparatus equipped with multi-frequency convex linear transducer and splenic span was measured; we used age and sex dependent standard for splenomegaly [11].

Consents were obtained from parent of patients. Data confidentiality was preserved. The Scientific Research Committee of the Pediatrics Department, Cairo University approved the study protocol.

Geotype distribution of the study groups are demonstrated in Table 2. Out of 40 FMF patients 4 (10%) were homozygotes 32 (80%) were heterozygotes and 4 (10%) were gene negative.

Table 4: Comparison between disease severity score, response to colchicine therapy, and number of attacks per year in study groups. 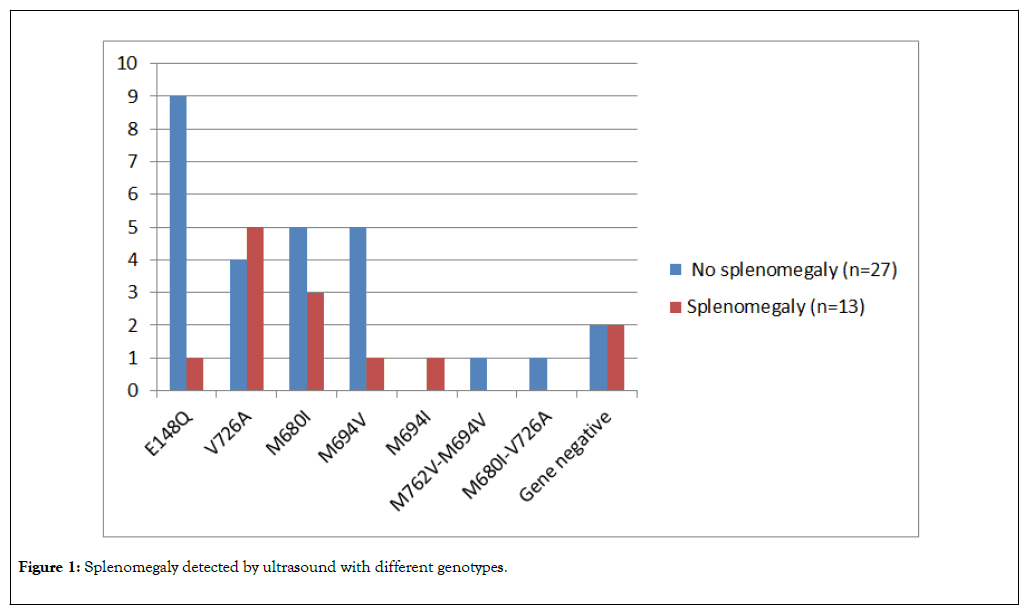 Table 6: Platelet count, Mean platelet volume, C-reactive protein, and Erythrocyte sedimentation rate in some patients of the most frequent genotypes.

Familial Mediterranean fever is an autosomal recessive disease due to mutation of MEFV gene on the short arm of chromosome 16 [12]. FMF is characterized by intermittent attacks of fever, abdominal pain, and arthritis [13]. It frequently occurs among Turkish, Armenians, Jews (Arabs, Ashkenazi) and Mediterranean region ethnics [14].

This cross-sectional study was done on 40 patients with FMF already diagnosed clinically and according to genetic mutations and they are followed up in the Rheumatology clinic, Specialized Cairo University, Pediatric Hospital to detect the correlation of MPV and splenomegaly as subclinical inflammatory markers in children with FMF.

Mean age of onset, mean age at diagnosis, and mean time interval between disease onset and diagnosis of all study population were 4.12 ± 2.12 and 6.47 ± 2.81 and 3.01 ± 3.27 years respectively. Duşunsel et al. [15] reported higher mean age of onset and mean age at diagnosis of 6.8 ± 3.7 and 9.7 ± 3.7 respectively, than that observed in our patients. Our study populations had age of onset earlier and much lower than reported by Ebru et al. [18] as well who reported mean age of onset of 6.8 ± 3.7 years. That might be attributed to the early detection of FMF patients in our rheumatology pediatric unit by clinical suspicious before the confirmation by genetic analysis.

In our study, fever was the most common presenting feature and was documented in 40 out of 40 patients (100% of cases), followed by abdominal pain in 38 patients (95%), and arthritis in 34 patients (85%), ELE in 10 patients (25%) and chest pain in 7 patients (17.5%). Almost all patients with FMF have periodic febrile episodes that last from several hours up to 5 days; typical episode includes fever and one or more symptoms of abdominal pain (90%), arthritis or arthralgia (85%), and chest pain (20%) [23]. Similar results were nearly reported by other studies [15,16,24]. On the other hand, Sayarlıoğlu et al., reported that abdominal pain was the most common symptom, followed by fever, arthritis, pleuritis and ELE [17].

FMF may coexist with systemic inflammatory diseases such as vasculitides, spondyloarthritis, multiple sclerosis, and inflammatory bowel disease (IBD); MEFV mutations probably result in up regulation of the innate immune system with increased IL-1β production that serves as an exaggerated initial response to environmental triggers, mainly the infectious agents [25]. In our study, diseases that may be associated with FMF were determined in 2 patients (5%), JIA and SLE.

Subclinical inflammation may continue during attack-free periods in approximately 30% of FMF patient [28]. MPV and splenomegaly correlate with the inflammatory activity of FMF patients at the attack-free period. These may be applicable for clinical chronic inflammatory condition score marker that related to prognosis [7]. In our study, abdominal ultrasonography was done for all FMF patients to detect the presence of splenomegaly that was we detected in 32.5% of our patients that was comparable to study by Dursun et al. [7] who reported splenomegaly in 27.9% among their study population. Aharoni et al. [29] detected splenomegaly in 27.5%, 13.3% of patients with FMF at the attack and at attack free period, respectively.

In our study we found a significant difference in MPV (p=0.03) between group 1 (splenmegaly) and group 2 (no splenomegaly) with a higher MPV (mean ± SD) among group 1 patients with no other significant differences between both groups regarding mean ± SD platelet count, CRP and ESR. That was comparable with the study done by Dursun et al. [7] who found that the MPV of FMF patients with splenomegaly (8.9 ± 0.8 fl) that was significantly higher than that for patients without splenomegaly (8.4 ± 0.5 fl). Milovanovic et al. [30] have reported that in active disease IL-6 but not thrombopoietin (TPO) is related to platelet count. Thus, IL-6 raises platelet count in reactive thrombocytosis and the neutrophil count.

E148Q mutation was the most frequent genotype among patients with no splenomegaly (22.50%), on the other hand V726A mutation was most frequent genotype among patients with splenomegaly (12.50%). V726A mutation had also relatively lower mean platelet count, higher MPV, and higher median ESR (298.89 ± 48.41 ×103/mm3, and 9.11 ± 1.78 fl, 25 mm/h, respectively) than other genotypes. Paut et al. [31] noted that homozygosity for the M694V mutation significantly correlated with splenomegaly; however, we could not find this observation in our study similar to Inal et al. [5].

The diagnosis of FMF is based mainly on the clinical criteria and laboratory examinations. Splenomegaly was detected in a considerable number of FMF patients and MPV were significantly higher in patients with splenomegaly. These could help for diagnosis of the FMF and may be applied for clinical chronic inflammatory condition score markers that may be related to prognosis and the development of amyloidosis. Further studies with more number of patients are needed to confirm our results.

No financial or non-financial benefit have been received or will be received from any party related directly or in directly to the subject of this article.

Copyright: © 2020 Talaat HS, et al. This is an open-access article distributed under the terms of the Creative Commons Attribution License, which permits unrestricted use, distribution, and reproduction in any medium, provided the original author and source are credited.