Non traumatic urological emergencies include a number of urogenital disorders occurring apart from trauma and whose management cannot be delayed. Once the concept of trauma aside, the etiological field research is extended and clinician sometimes has put in an embarrassing situation. However, their management should be quick under penalty because some of these non-traumatic emergencies can lead patient death and or functional prognosis of organ in question.

This study has initiated to determine the prevalence and the management of the major no traumatic urological emergencies in the teaching university hospital at Cotonou in Benin Republic.

This is a retrospective, descriptive study conducted within a year. All patients age was at least 15 years regardless of the sex have been included. We did not included in this study, patients under age 15 years old who have supported by the Peadiatric surgery department and all patients who have admitted for urological emergency in a traumatical context. The following items have studied: prevalence, age, sex, the complaints, diagnostic means, emergency type, etiologies, emergency management and results of management. The data have processed on epi-info version 3.5.1.

Delay of consultation was average 3 years. The most common complaints were urine complete retention and hematuria. They represented respectively 44 cases (57.9%) and 12 cases (15.8%). Others symptoms such as kidney pain, acute testis pain, excretory anuria were respectively in 9 cases (11.8%), 6 cases (7.9%) and 3 cases (3.9%). The most common emergency types had been urine complete retention, hematuria and acute renal colic as shown in Table 1.

Table 1: The distribution of the patients according emergency type.

The main management in emergency had been to place urethral catheter (Table 2 and Figures 1 and 2). 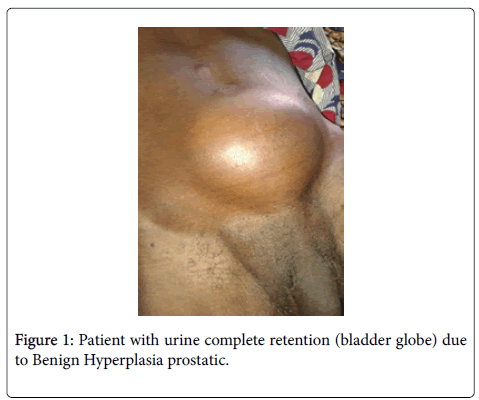 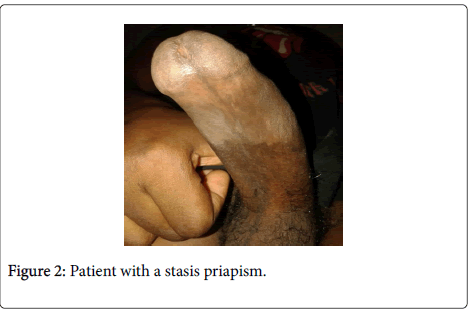 Figure 2: Patient with a stasis priapism.

After the lifting of the emergency digital rectal examination followed by ultrasound imaging, total serum prostate specific antigen (PSA), level of creatinine or voiding urethrocystography were requested by diagnosis suspected in patient. The main etiology of UCR was BPH in 29 cases (66%). Other etiologies as such as urethral stenosis, prostatic cancer and Bladder lithiasis followed in 6 cases (13.6%), 5 cases (11.4%) and 4 cases (9%), respectively. The emergency has been managed it all cases and 58% of these cases had been out immediately in outpatient. Forty-two percent of cases had a long hospital stay in the urology department for tracking and monitoring support.

The delay of intervention was on average 1 year for BPH and urethral strictures but three months for bladder stones. As against some diseases such as gangrene of Fournier, torsion of the spermatic cord were supported in the time of their admission before reanimation for gangrene of Fournier case’s because the patients with this disease had come to advanced stage. In patients suspected of prostate cancer after an elevated level total serum PSA and digital rectal examination suspect, anatomopathological screening after biopsy was performed to confirm or non-diagnosis. If the result was positive an evaluation of clinical stage was done. The Gleason score was in between 6-8.

In this study, non-traumatic urological emergencies had accounted 92.7% of urological emergencies. Zango et al. [1] and Fall et al. [2] have found 93.3% and 94.6% of cases, respectively. It is clear that the urological emergencies have accounted only by non-traumatic urological emergencies due to the scarcity of urogenital trauma. The average age of patients was 61 years old and the age group 61 to 79 years was the most represented. This result is much closed to those of Kambou et al. [3] (58.8 years old), Fall et al. [2] (59 years old) in the same age group. This age found in most African studies [2,3] was explained by the fact that urine complete retention is the main reason for consultation. This etiology has been dominated by prostatic tumor confined of the older man. In contrast, urine complete retention has been only 22% of cases of the urology complaints in France while the annual incidence has been 3.06 per thousand in England [4,5]. This difference could be explained by the high resources level of these countries where patients presented at an early stage of the disease in contrast which Africa, where resources level is low so that patients can consult but at the complication stage. The sex ratio in this study was 5.3. This result is significantly lower than Zango et al. [2] which was 8.8 and Fall et al. [3] who have found themselves 20.3, so Parra et al. [6] have found 837 men against 667 women and Ugare et al. [7] had found 39:1. This large difference is certainly due to the sample size which was very inferior to others because of this study period which had been very short (six months against 20, 24 months, respectively others studies). Although true urologic emergencies are extremely rare, they are a vital part of any emergency physician's (EP) knowledge base, as delays in treatment lead to permanent damage [8]. However, in this study the main complaint of non-traumatic urologic emergencies has been urine complete retention complete in 57.9% of cases in this study and its etiology has been prostatic tumor in 34 cases (77,4%). These results are similar to those of Ikuerowo et al. [9] who have found that the prostatic tumor is the first etiology in 64% of cases but Parra et al. [6] have found acute renal colic in 670 cases in both sex. Ugare et al. [7] have found that on hundred and fifty nine (0.23%), presented with urinary retention; 145 (91.2%) were acute, and 14 (8.8%) were chronic as soon as common causes prostatic diseases (BPH and cancer of the prostate) 77.0%, infections 75.8%, trauma 12.1%, and congenital 12.1 %. Desgranchamps et al. [10] have found in their series of 2618 men analysed, that BPH was revealed by AUR (Acute urine retention) in 52.3% of men with precipated AUR and 25.9% of men with spontaneous AUR. Urethral catheterization was the most used method in this study. Men with acute urinary retention from benign prostatic hyperplasia have an increased chance of returning to normal voiding if alpha blockers are started at the time of catheter insertion. Suprapubic catheterization may be superior to urethral catheterization for shortterm management and silver alloy-impregnated urethral catheters have been shown to reduce urinary tract infection [11]. The Reten-World survey is aimed at assessing current practice in the management of AUR in France, Asia, Latin America, North Africa and the Middle East. Interim results based on 3785 men with AUR associated with benign prostatic hyperplasia show that a urethral catheter is inserted in most cases (87%). Following this initial step, a TWOC (trial without catheter) after a median of 3 days' catheterization has become standard practice worldwide, with only a minority of men (6%) undergoing immediate surgery. Treatment with an alpha (1)-blocker before a TWOC improves the chances of success, regardless of the duration of catheterization [12]. Horgan et al. [13] recommended that the use of suprapubic catheters should become the preferred initial treatment for acute urinary retention. So, Fitzpatrick et al. [14] conclude that TWOC has become a standard practice worldwide for men with BPH and AUR. In most cases, an α (1)-blocker is prescribed before TWOC and significantly increases the chance of success. Prolonged catheterization is associated with an increased morbidity. But Zhengyong et al. [15] have said that bladder training before urinary catheter removal did not increase the chance of TWOC success significantly in spontaneous AUR patients with BPH. Among the causes of hematuria Ng et al. [16] found principally benign prostatic hyperplasia (BPH) in 22.6% which is similar to the results of this study. In the renal failure, cystocatheterization has been made or a cystostomy bypass in the operative block. The other cases such as spermatic cord torsion, Fournier’s gangrene have conducted in operative block immediately. Medical treatment had been instituted in emergency in cases where surgery had not indicated. It has noted that two cases of iatrogenic anuria by ligation of the ureters after hysterectomy which have taken in emergency for ureter reimplantation and diversion with ureteral catheter.

Non traumatic urological emergencies are often complex requiring various management. However, their prevalence has been high in this study and they are usually a discovery circumstance of urologic pathology in the patient.

The authors declared that they have no conflict interest.

Citation: © 2018 Avakoudjo JDG, et al. This is an open-access article distributed under the terms of the Creative Commons Attribution License, which permits unrestricted use, distribution, and reproduction in any medium, provided the original author and source are credited.

Copyright: © 2018 Avakoudjo JDG, et al. This is an open-access article distributed under the terms of the Creative Commons Attribution License, which permits unrestricted use, distribution, and reproduction in any medium, provided the original author and source are credited.
Top