Progression in Plastic Aesthetics and Skincare

Healthcare Nursing and its developments

In the dental industry, it seems no one has entertained the thought that if a dislocated mandible, in a Class II Skeletal relation could occlude or block the blood flow in in the STA. Therefore stopping or impeding blood flow to the vertex of the head and therefor causing balding. Taking into consideration that in a healthy Class I Skeletal relation, the clearance between the base of the skull and the eminence of the condyle is only 3.5 mm. Orthodontic experience tells us that mandibles 3.5 mm retro gnathic and more are very common. The intent of this paper is to expose the facts and evidence that show the Class II Skeletal mandible is the cause of balding by blocking blood flow through the S.T.A. balding of vertex can be avoided. A large array of research has been, and continues to be conducted to determine the causative agent for hair loss. Traditionally such investigation has focused on a number of varying topics, including but not limited to chromosome composition, genotype, and subsequent phenotype expression. However, little or no investigation has been conducted to deduce what effect the skeletal relationship has upon the initial development of hair loss. Through a series of observational case studies, it is evident that there is a relationship between malocclusion and hair loss. Specifically, through analysis of dental records, cephalometric radiographs, and visual observation of patients, there appears to be a correlation between Class II Skeletal malocclusion and subsequent hair loss. Further investigation yields that vascular anatomical differences between different skeletal schemes is associated with the development of hair loss.

It is clear that the Superior Temporal Artery (STA) [1-4] represents 85% of the vascular supply to the scalp, whilst the remaining 15% is provided by the Occipital Artery (OA). In healthy Class I skeletal relationship (Figure 1), there is adequate clearance (3.5 mm) between the base of the skull, and the eminence of the condyle, to allow for adequate perfusion of the scalp by the STA [5]. However, in the instance of Class II Skeletal malocclusion, there is the possibility of reduced perfusion or occluded blood flow in the STA, due to the retrognathic architecture of the skull. Evaluation of the population reveals that hair loss is seen overwhelmingly among individuals with Class II skeletal profile, supporting the hypothesis that malocclusion leading to reduced vascular perfusion of the scalp in turn results in hair loss (Figure 2). In order to evaluate the connection between the bald patient, and their corresponding occlusion [6,7], a retrospective analysis was conducted. Specifically, the occlusion of men suffering from hair loss was evaluated through visual observation, dental models, as well skeletal cephalometric radiographs [6-9]. In order to limit confounding factors, only those individuals with no prior experience of orthodontic treatment were selected. Additionally, a minimum age of thirty years was selected for inclusion in this retrospective analysis. A total of one hundred individuals suffering from hair loss were selected for inclusion, and served as the experimental group.

With respect to the control group, only those individuals with no prior experience of orthodontic treatment, with a minimum age of thirty years, and with Class III Skeletal jaw relation were selected for inclusion. A total of fifty individuals with no hair loss were selected for inclusion, and served as the control group (Figure 3). 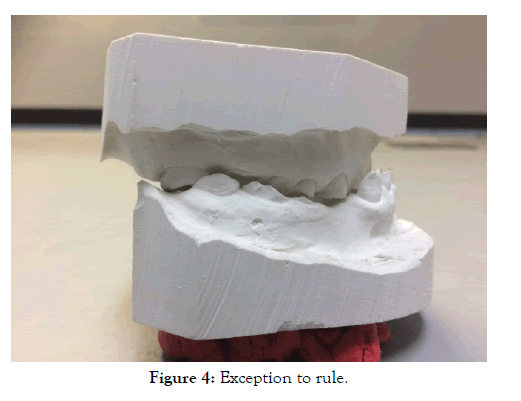 Of the fifty individuals presenting with no hair loss, all subjects present with a Class III skeletal relationship, upon evaluation of their dental and skeletal occlusal records.

As Dentistry shifts towards a more conservative approach, focusing on prevention prior to intervention, a similar approach should be utilized to prevent hair loss. Namely, with knowledge of the association between Class II skeletal relationship and hair loss, greater precedence should be given to correct the skeletal relationship, and malocclusion. In doing so, the functionality and esthetics of the dentition is enhanced, whilst eliminating the occlusion of the superior temporal artery, allowing for the majority of the vascular perfusion of the scalp to be maintained, circumventing hair loss.

Copyright: Â© 2019 Dye B. This is an open-access article distributed under the terms of the Creative Commons Attribution License, which permits unrestricted use, distribution, and reproduction in any medium, provided the original author and source are credited.