A 78-year-old man sustained right knee dislocation in a fall. His pain was diminished on account of his past history of tabes dorsalis due to neurosyphilis, resulting in delayed hospital attendance for a week. The injury was posterolateral rotatory dislocation of the knee. Since closed reduction was not possible, open reduction was performed. Most cases of knee joint dislocation are easy to reduce. However, it is difficult to conduct closed reduction in this type of dislocation, because the joint capsule and medial collateral ligaments are torn by the medial femoral condyle. It is important to recognize that some types of dislocation of the knee are difficult to reduce.

Dislocation of the knee joint is a rare injury caused by damage to the integrity of the tibiofemoral joint and multiple ligaments. It accounts for approximately 0.02-0.2% of all orthopedic trauma [1]. We herein report a case of knee dislocation with an unusual clinical course in which closed reduction was difficult due to the patient’s past illness. 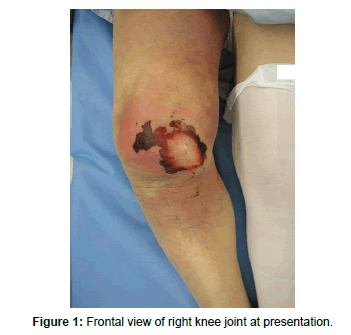 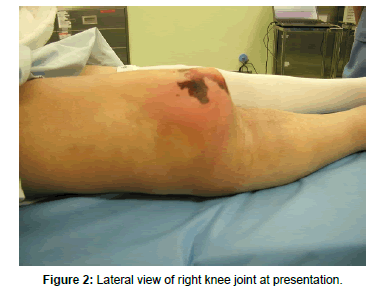 A 78-year-old man was injured in a fall while wheeling his bicycle on a snowy road. Although his right knee joint was deformed, he left it untreated for seven days, but finally attended the outpatient department of our hospital at the suggestion of his family on day 8 after the injury. At the first examination, his right knee joint was swollen and contracted in a slight flexion/varus/lateral rotation position. The femur protruded as a result of the deformation, and the skin of the proximomedial region of the knee showed ischemic change due to compression (Figures 1 and 2). The right dorsalis pedis pulse was weak but palpable. Plain X-ray films showed that the patella was outwardly displaced, and the tibia was displaced posterolaterally to the femur. Based on these findings, we made a diagnosis of traumatic knee joint dislocation (Figures 3 and 4).

He had a history of quaternary neurosyphilis and had been treated with high doses of penicillin prior to the current visit, with sequelae of tabes dorsalis and dementia. Before the injury, imperception and gait disturbance due to spinal ataxia had been observed in the patient.

Under fluoroscopic guidance, we tried several closed reduction methods such as anterior tibial drawer in the knee flexed position, lower limb traction and application of anterior pressure to the patella, but failed to reposition the knee. Subsequently, we tried to perform closed reduction under general anesthesia. During repositioning, the skin with ischemic change was lacerated and the articular surface of the medial femoral condyle was exposed, creating an open wound on the knee (Figure 5). Consequently, we changed the procedure to open reduction. 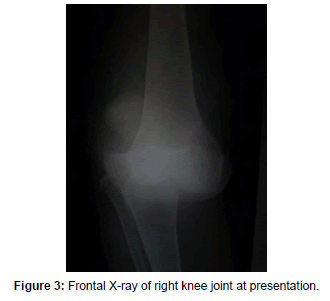 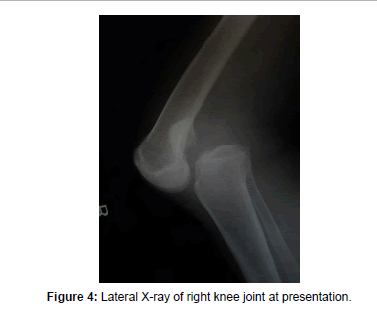 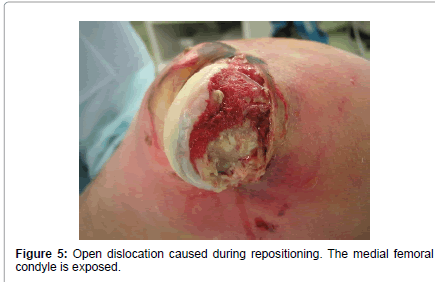 When we enlarged the laceration and extended the skin incision, it was revealed that the medial femoral condyle was impacted in a button-shaped hiatus created in the vastus medialis muscle/medial retinaculum/joint capsule, and this was the factor hindering reduction. In addition, the medial collateral ligament had been detached from its site of attachment to the femur. After repairing the impaction, we successfully repositioned the patella (Figure 6). Then we fully cleaned the wound and reattached the medial collateral ligament as much as possible. Subsequently, we repaired the hiatus and immobilized the knee in a cast. Since the patient had a fever and his right knee joint showed signs of infection at around day 14 after surgery. Postoperative infection of the knee joint was suspected and administration of cefazolin (3 g/ day) was started immediately after synovial fluid culture. The synovial fluid culture showed Staphyloccous aureus. We performed arthroscopic lavage and debridement of the wound on day 16 after surgery, and as a result the infection was successfully suppressed on day 28 after surgery. Considering the patient’s activities of daily living before the injury and the postoperative infection, we gave up ligament reconstruction. After six weeks in a cast, a long leg brace was applied. The patient underwent rehabilitation and became able to move around unaided in a wheelchair one year after surgery.

This is the first case report of knee joint dislocation complicated by tabes dorsalis in the English literature. The oldest literature regarding knee dislocation was written by Sir Astley Cooper in 1825 [1]. In 1963, Kennedy reported the results of his experiment reproducing dislocation using a corpse. This report suggested a classification of knee dislocations based on the position of the displaced tibia relative to the femur [2]. Knee dislocations are classified into five types; anterior, posterior, medial, lateral, and rotatory. Rotatory dislocations can further be subdivided into four types; anterolateral, anteromedial, posterolateral and posteromedial. According to Green et al., rotatory type accounts for only 5% of all knee joint dislocations, being particularly rare [3]. The present case falls into the rotatory-posterolateral category of this classification. Most cases of knee dislocation are easy to reduce; however, closed reduction was impossible in this patient [1].

Griswold called the rotatory-posterolateral type dislocation “irreducible dislocation”, and reported that it is a dislocation where closed reduction is impossible [4]. The reason, explained in their report, is that when a posterolateral rotatory dislocation of the knee occurs, the joint capsule and collateral ligaments are torn by the medial femoral condyle, which makes it hard to reposition. A similar mechanism was reported by Quinlan et al., suggesting that the impaction of the medial femoral condyle into the ruptured medial joint capsule is an obstacle to successful reduction, and this opinion matches our patient’s clinical state in which reduction was difficult [5]. With regard to the method to repair this kind of impaction, there have been different suggestions. One report indicated that arthroscopic surgery was effective, but other reports suggested that it was difficult to repair the impaction with arthroscopic surgery [6-8]. In either case, it is considered that this dislocation is not reducible without open repair of the impaction of the medial femoral condyle. Since this patient had had tabes dorsalis, he experienced less pain due to the dislocation. After the injury, he did not attend hospital despite recognizing the deformation, markedly delaying the start of the treatment. We consider that this prolonged the period of regional skin ischemia caused by the deformation, and resulted in creation of an open wound leading into the joint. The vast majority of knee joint dislocations are considered to be easy to reduce; however, it should be noted that some types of dislocation are difficult to reduce, and rapid conversion to a surgical procedure should be indicated. Figure 6:Open reduction for open fracture during repositioning. On repairing the impaction, the patella was successfully repositioned.

Copyright: © 2013 Shimura Y, et al. This is an open-access article distributed under the terms of the Creative Commons Attribution License, which permits unrestricted use, distribution, and reproduction in any medium, provided the original author and source are credited.