Purpose: To determine the variability in DNA methylation of the human telomerase reverse transcriptase (hTERT) promotor in cells of follicular fluid of patients receiving ovarian stimulation for treatment with in vitro fertilization (IVF), in connection with possible cancer related health risk in offspring.

Materials and method: The pilot study analysed the variability in DNA methylation of five cancer related CpG biomarkers in the hTERT promoter by bisulfite pyrosequencing in cells of follicular fluid of 8 patients treated by IVF, each one originating from one ovary.

Conclusion: Bisulfite pyrosequencing allows for highly sensitive detection of CpG specific DNA methylation of the five dinucleotides of the hTERT promoter region in cells of follicular fluid of patients treated by ovarian stimulation for IVF. The occasional observation of tumorigenic DNA methylation at GpC motifs strongly associated with hepatocellular carcinoma and sporadic malignant paediatric brain tumours, suggests that offspring of IVF pregnancies may be at increased risk of adverse cancer outcomes. In order to reduce the possible cancer risk in the offspring related to hTERT hypermethylation and oxidative DNA damage, nutraceutical food supplementation during conception and early pregnancy may warrant further investigation, aiming at the reduction of the homocysteine concentration and the hTERT promoter methylation in follicular fluid and cells during ovarian stimulation.

Assisted reproduction techniques, in particular IVF and ICSI, have generated enormous progress to the treatment of couple infertility. However, some doubts have risen regarding the health and development of children born after using these techniques. This involves aspects of transition mutagenesis and potential carcinogenesis related to the excess of oxidized DNA (8-OH-2deoxyguanosin) in spermatozoa of infertile men [1], and metagenetic alterations possibly causing unfavourable cardio-metabolic profiles in childhood [2], and increased risk for drug treated attention deficit/hyperactivity disorder [3].

Ovarian stimulation for IVF has been reported to cause increased concentrations of homocysteine in blood and in follicular fluid [4,5] that, among other things, is associated with poor embryo quality [6,7] and with unfavourable pregnancy outcomes. Elevated homocysteine may influence DNA methylation [8,9], particularly at the CpG sites [10]. It should be stressed that homocysteine may either decrease or increase DNA methylation through the one carbon pathway. Aside from the effect of oestrogens, external factors, nutrition in particular [11], influence the balance between the two main cofactors S-adenosylmethionine (SAM) and S- adenosylhomocysteine (SAH) in transferring methyl groups to the DNA [9].

In mature human oocytes telomerase remains quiescent [12] and telomerase activity is low or absent [13,14], but telomerase reverse transferase (TERT)-mRNA is expressed in human oocytes at the stage of germinal vesicle, metaphase I, metaphase II during the cycle of ovarian stimulation, and in cleavage-stage embryos. In addition, three different TERT subunit isoforms were found in oocytes [15]. Telomeres are shorter in the oocytes from women undergoing in vitro fertilization, who then produced fragmented, aneuploidy embryos that fail to implant [16], and higher telomerase activity was a more significant predictor of a favourable outcome of IVF treatment than telomere length in granulosa cells [17].

Recent reports suggest the prevalence of certain cancers and of leukaemia to be increased among children born after IVF [18-20]. There is evidence that childhood brain cancers are characterised by increased methylation of the promotor region of the telomerase reverse transcriptase (Figure 1) increasing telomerase enzymatic activity [21]. The TERT-promoter regulates the activity of the catabolic subunit of telomerase. Hyper-methylation of the TERT promoter region results in decreased activity of this catabolic subunit [22], by which the anabolic subunit will become predominant [23]. This may result in excessive lengthening of the telomeres, which is associated with malignant degeneration [24]. 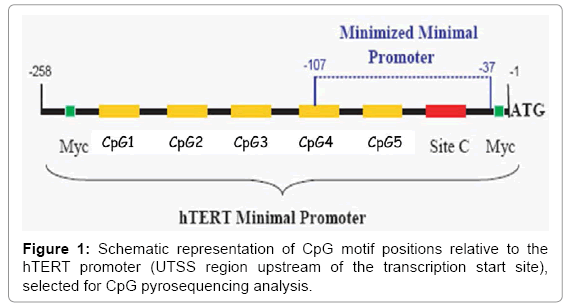 It is our hypothesis that altered methylation of the TERT promotor region, possibly related to increased homocysteine concentration in follicular fluid of stimulated ovaries in IVF, may be a factor associated to the observed increment in cancers in the offspring (Figure 2). In order to test the hypothesis a study was performed, to develop and validate a pyrosequencing method to quantify the DNA methylation levels of 5 cancer related CpG biomarkers in the hTERT promoter region in follicular fluid obtained during oocyte retrieval in IVF. 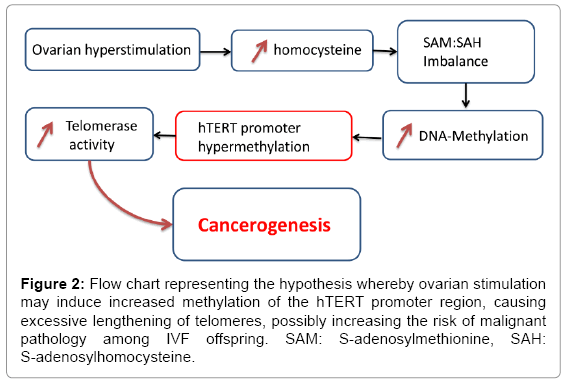 Of particular interest in relation to protecting the offspring of IVF against undesired (epi-)genetic defects, nutraceutical food supplementation to the father was found to decrease the sperm content of oxidised DNA [1], whereas the preconception and gestational supplementation to the mother increased the ongoing pregnancy rate after IVF [25]. Also, early gestation is considered the critical timewindow for changes in the prenatal environment and to affect the adult human blood methylation [26]. Nutraceutical food supplements for the treatment of couple infertility to be taken around conception have recently been compared [27]. Moreover, we have been the first to introduce a formulation containing antioxidants, plant extracts and the combination of vitamins B6, B9 and B12, reducing the homocysteine concentration, and selenium [28]. The latter has been shown to decrease DNA-methylation [29-31] by inhibiting the activity of the methyltransferase [32]. The hTERT promoter upstream of the transcription start site (UTSS region) consists of 5 well characterized CpG dinucleotides (Figure 1).

Eight samples of follicular fluid were obtained at the occasion of the oocyte retrieval for IVF. Patients were stimulated to develop several follicles according to conventional methods. The patients were treated for ovarian stimulation with human menopausal gonadotropin (hMG, Menopur®, Ferring Pharmaceuticals, Saint Prex, Switzerland), three ampules of 75 IU subcutaneously daily until a follicular diameter of at least 18 mm was attained. Triggering oocyte maturation was done with 10000 IU of human chorionic gonadotropin (hCG, Pregnyl, MSD, Kenilworth, New Jersey, United Sates) injected 36 hours before oocyte pick-up. Aspiration of the follicular fluid was performed through a Cook 17 gauge aspiration needle (K-OSN-1730-B-60) with a negative pressure of 140 mm HG (Cook vacuum pump UL 60601-1, CAN/CSA-C22.2). The cumulus oocyte complexes were isolated and transferred into a culture medium (Ferticult IVF medium®, Fertipro, Beernem, Belgium). The remaining follicular fluid – on the condition that it was macroscopically free of blood – of the different follicles of a single ovary were added in one container per individual patient. These samples were immediately pelleted by centrifuged (3000 rpm 10 min) and transported snap-frozen on dry ice and stored at -70°C. Genomic DNA was subsequently isolated from frozen pellets with DNeasy blood and tissue kit (Qiagen).

Epigenetic analysis for the measurement of the degree of methylation of the hTERT promotor and its 5 individual dinucleotides was performed essentially as described by Castelo-Branco et al. [21] with minor modifications. In brief, 1 μg gDNA of each sample was sodium bisulfite converted using the EpiTect fast DNA bisulfite kit (Qiagen) according to manufacturer’s instructions. 15 ng bisulfite converted DNA was used as an input for PCR amplification using the PyroMark PCR kit (Qiagen). Finally, pyrosequencing was performed using the PyroMark Q24 instrument and PyroMark Q24 advanced CpG reagents (Qiagen). Methylation percentages for each CpG were obtained and analysed using the PyroMark Q24 advanced software (Qiagen). Only samples which passed quality control after pyrosequencing were used for further analysis and graphical representation. The hTERT pyrosequencing assay was designed using the PyroMark assay design software (Qiagen). Following primers were used: forward ATGTGGAGGTTTTGGGAATAG, reverse AACCTAAAAACAACCCTAAATCT and sequencing GGTTTTGGGAATAGGTG, spanning the hTERT promoter region (chr5:1,295,586-1,295,643).

Since it seems ethically unacceptable or technically unfeasible to aspirate follicular fluid in healthy women not treated by assisted reproduction, the experimental setup does not include follicular fluid of untreated controls. gDNA depleted samples served as negative test controls and did not yield any signal (data not shown). The results were plotted and analysed by the MedCalc statistical programme (MedCalc, Ostend, Belgium), and presented as multiple line graphs.

The research was approved by the ethical committee of the Palfijn Hospital, Ghent, Belgium, and patients gave informed consent to participating in the project. 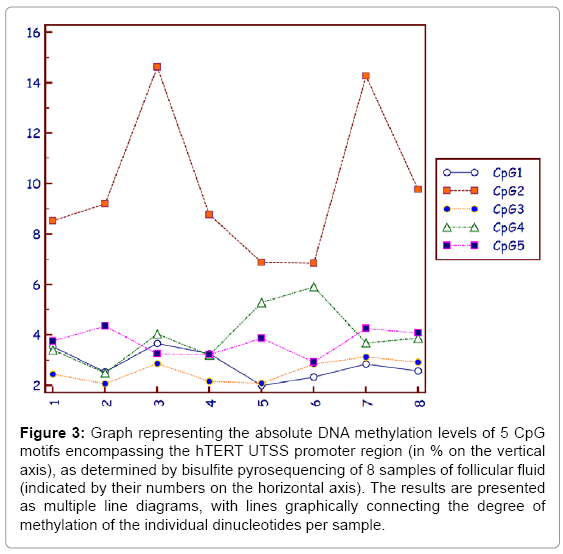 Figure 3: Graph representing the absolute DNA methylation levels of 5 CpG motifs encompassing the hTERT UTSS promoter region (in % on the vertical axis), as determined by bisulfite pyrosequencing of 8 samples of follicular fluid (indicated by their numbers on the horizontal axis). The results are presented as multiple line diagrams, with lines graphically connecting the degree of methylation of the individual dinucleotides per sample. 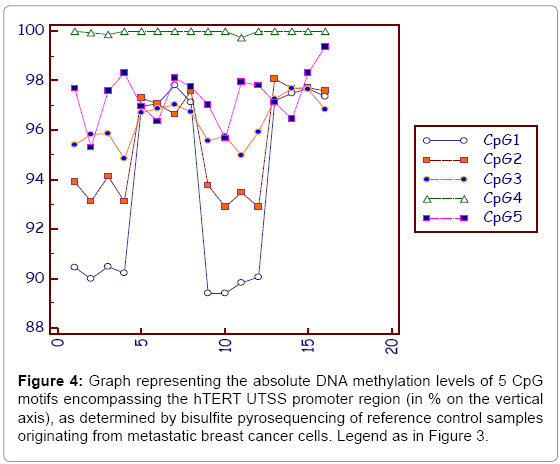 It appears that the degree of methylation of the 5 CpG dinucleotides in follicular fluid samples varies between 2 and 15%, with the highest variability at the CpG2 position (Figure 3). In contrast, DNA methylation levels measured in the metastatic breast cancer cells peaks around 90 to 100% for all CpGs (Figure 4).

Follicular fluid obtained at the time of puncture of stimulated ovaries during IVF reflects the composition of the “milieu interieur” [33] of metaphase II oocytes and their surrounding corona cells. DNA analysis and measurement of the degree of methylation relates to the nucleated corona radiata and granulosa cells present in follicular fluid. Because of the intense communication between cumulus-corona cells and the oocyte, either paracrine or through gap-junctions [34], the latter is assumed to be representative for the DNA situation of the oocytes. This assumption is justified since the external factors that determine the level of epigenetic changes are common to all cells contained in the follicle, including the oocytes.

With respect to the sporadic 15% DNA methylation levels observed in the GpC2 motif, the same CpG dinucleotide was recently identified as a very reliable cancer biomarker (P<0.001) for hepatocellular carcinoma, with a mean DNA methylation of 18% as compared to 7% in healthy control tissue [24]. Also, 15% DNA methylation was found to be the limit above which sporadic malignant paediatric brain tumours have been identified, and TERT-promoter methylation was considered relevant. Whereas DNA hyper-methylation over 60% and increased TERT expression can be observed in most malignant tumours [21], occasional increase (>15%) in DNA methylation levels at the CpG2 position in the hTERT promoter in cells present in follicular fluid of stimulated ovaries of IVF patients, may be connected to an increased risk of adverse cancer outcomes in offspring.

As with the variable concentration of homocysteine in follicular fluid [35] there is considerable variability of the degree of DNA methylation of the TERT promotor region in samples of follicular fluid originating from different ovaries. Further study of the relation between homocysteine and hTERT promoter methylation in follicular fluid of stimulated ovaries is mandatory, since the authors are fully aware that the preliminary findings reported here need to be further explored. Nonetheless, it should be prudent to aim at reducing the level of homocysteine and of the degree of DNA-methylation, for instance by pre-conceptional nutraceutical food supplementation to women treated by IVF. Whether prescription of a nutraceutical containing a judicious combination of a panel of anti-oxidants with complementary effects, of plant extracts with anti-inflammatory action, of vitamins B6, B9 and B12 to reduce the homocysteine concentration [27], and of selenium to diminish the level of DNA methylation in couples being treated by IVF, remains to be explored.

We provide proof of concept for bisulfite pyrosequencing based quantification of CpG specific DNA methylation in the hTERT promoter of cells of follicular fluid of stimulated ovaries during IVF. In general, average DNA methylation of the hTERT promoter region is relatively low in follicular fluid cells as compared to that in malignant tumour cells, and it is similar to that in healthy cells. In contrast, the degree of methylation at the cancer related CpG2 motif is rather variable, occasionally exceeding the methylation level associated with hepatocellular carcinoma or sporadic paediatric malignant brain tumours. In this respect strategies aiming at the reduction the concentration of homocysteine, of the levels of DNA methylation, and of oxidative DNA oxidation, both before conception and in early pregnancy deserve further investigation.

Frank Comhaire holds the Belgian patent protecting the formulation of the nutraceutical referred to in the manuscript.

This study has benefited from financial support of Nutriphyt Ltd, Oostkamp, Belgium. The authors express their gratitude to the technical staff of the Fertility- Belgium centre for reproductive medicine of the Jan Palfijn municipal hospital in Ghent.

Copyright: © 2015 Comhaire FH, et al. This is an open-access article distributed under the terms of the Creative Commons Attribution License, which permits unrestricted use, distribution, and reproduction in any medium, provided the original author and source are credited.