Background: Severe pain caused by multiple rib fractures (MRF) can compromise oxygenation, ventilation and pulmonary functions so can affect patient outcome. Adequate pain control helps to avoid these complications. Thoracic paravertebral analgesia is comparable to thoracic epidural with fewer side effects.
Methods: Seventy-five patients were randomly allocated into three groups, (n=25 each). Group (GM) received intravenous morphine with a loading dose of 0.1-0.2 mg/kg followed by PCA bolus of 1mg with a six min lockout. Group (GMD) received also intravenous morphine with a loading dose of 0.1-0.2 mg/kg then PCA bolus of 1 mg morphine plus 5 μg dexmedetomidine with a six min lockout. Group (GPV) received paravertebral morphine loading dose of 0.2 mg/kg then PCA bolus of 0.1 ml/kg of a solution with a concentration of 0.5 mg/ml morphine mixed with 1 μg/ml dexmedetomidine and 60 min lockout. Any patient with VAS score more than 4, a top-up dose was given until VAS ≤ 4
Results: No significant difference between the three groups as regards age, BMI, sex, and ASA. Road traffic accident was the main cause of blunt chest trauma (64%, 76% and 68% in GM, GMD, and GPV respectively). Total morphine requirements were significantly lower in GMD and GPV than GM and in GPV than GMD (GM=190.9 ± 45.26, GMD=117.1 ± 31.9 and GPV=86.2 ± 21.7). There was a significant decrease in nausea and vomiting in GMD and GPV than GM. No significant difference in RR between the three groups although 8 patients in GM developed respiratory depression which was significantly higher than in GMD (2 patients) and GPV (0 patient). No significant difference in HR, MAP, and SpO2 between the groups. VAS scores at rest and with cough were significantly lower in both GMD and GPV than GM. FVC, FEV1 and PaO2/FiO2 ratio were significantly increased and PaCO2 significantly decrease in GMD and GPV than GM.
Conclusion: Adding dexmedetomidine to morphine either TPV or IV PCA significantly decreases VAS scores, improves pulmonary functions and also decrease morphine consumption with fewer side effects in patients with MRF.

Pain caused by fracture of one or two ribs is usually controlled efficiently by oral analgesic drugs [1]. However pain accompanying multiple rib fractures (three ribs or more) can be severe and may limit the ability to breathe and cough. Retention of secretions increase the risk of pulmonary infection, atelectasis and affection of respiratory mechanics can take place and may result in respiratory failure [2-4]. Systemic opoids are often the first-line for pain control in patients with MRF however their use can result in over-sedation, respiratory depression and cough suppression and so patients become unable to cough and expectorate effectively [2]. Because of that, regional anesthetic techniques are preferred for managing such patients as intercostal nerve block (ICNB), epidural analgesia, and thoracic paravertebral block (TPVB) and intrapleural analgesia [5]. Epidural analgesia is considered the best pain control modality for severe pain with MRF but it has some complications such as hypotension, bradycardia and bilateral block than TPVB that has a comparable analgesic effect to thoracic epidural analgesia [6-8]. Patient-controlled analgesia is recently considered in some trials. It allows the patient to deliver his own analgesic and it is rarely dispensing a wrong medication dose if it is programmed and operates as intended [9]. Dexmedetomidine, a medetomidine’s dextrogyrous enantiomer [10], possess an opioid-sparing effect due to its high selective α2 adrenoceptor agonist effect [11]. It has been recently proved that perioperative dexmedetomidine administration reduces postoperative morphine requirements even without loading dose [12-16]. Dexmedetomidine has a synergistic action with opioids [17]. The aim of this study was to evaluate the effects of morphine-dexmedetomidine combination either intravenous or paravertebral in chest trauma patients with unilateral MRF.

After approval of hospital ethical committee and obtaining a written, informed consent, 75 patients between the age of 20 and 50 years old with unilateral MRF were included in our study. The pain control regimen used in this study was explained for all the patients and the Visual Analogue Score (VAS) was taught to them to know how to rate their pain severity scored from 0 to 10; while 0 stands for no pain at all and 10 is the worst intolerable pain. Also, patients were educated for PCA.

Patients with unilateral MFR (3 or more ribs), hemodynamically stable, fully conscious and hemothorax or pneumothorax had been drained were included in this study. Patients who required any surgical intervention had been done before starting the study. We excluded patients with mechanical ventilation, disturbed conscious level, severe traumatic spinal cord or brain injury, spinal fracture or deformity, renal or hepatic diseases, anticoagulation and previously known allergy to study drugs or infection at the site of needle insertion. Patients who refuse to continue the analgesic modality and those who became sedated, intubated or mentally disturbed after starting the study were also excluded.

For each patient, IV access line and arterial line was secured and standard monitoring including ECG, SpO2 and invasive arterial blood pressure were applied. With the patient in the sitting position and under complete aseptic technique, the paravertebral space two segments below the upper most fractured rib or midway between the uppermost and the lowest fractured rib was identified by using realtime ultrasound guidance, ultrasound machine (sonoscape* SSI-6000) and A 12 MHz linear type probe. After local infiltration of the skin and underlying tissues by using 3 ml of 1% lidocaine solution, an 18 gauge Touhy needle (B.Braun, Perifix, Germany) was used to thread an epidural catheter that is advanced 3-4 cm into the paravertebral space then the needle was removed and the catheter was tunnelled subcutaneously and fixed to the back of the patient. The patient then positioned supine and 3 ml of lidocaine 2% with 5 μg/ml epinephrine was injected as a test dose after negative aspiration of blood or CSF.

HR, mean arterial blood pressure (MAP), respiratory rate (RR), arterial oxygen saturation (SpO2), and VAS scores at rest and with cough were recorded at baseline just before starting any medication. HR and MAP were measured every 5 min for the first 15 min. After that all parameters-HR, MAP, RR, SpO2, and VAS scores at rest and with cough-reassessed and recorded at 30 min, 1 h, 2 h, 4 h, 8 h, 12 h and then every 6 h until 48 h (the study period). FEV1, FVC (using a portable spirometer; FlowScreens, Erich Jaeger, Wurzburg, Germany), PaO2/FiO2 ratio and PaCO2 through arterial blood gas analysis were recorded at baseline and then every 8 h until 48 h. Total morphine requirement during the study period (48 h) was also recorded. At the end of the study period (48 h), all patients were questioned about the effectiveness of pain control regimen and asked to rate their satisfaction of the analgesia achieved as optimum, adequate or inadequate.

There were no significant difference between the three groups as regards the demographic data including age, BMI, sex and ASA classification of the patients. Road traffic accident were the main cause of blunt chest trauma in the three groups (64%, 76% and 68% in GM, GMD and GPV respectively) but there were some cases due to falling from height or direct trauma and there were no significant difference between the groups when the causes of MFRs were compared (Table 1).

Table 1: Demographic data and causes of multiple fracture ribs among the three groups.

Table 2: Total morphine requirements and side effects between the three groups.

There was no significant difference in RR between the three groups although 8 patients in GM developed respiratory depression throughout the study period which was significantly higher than in GMD (2 patients) and GPV (0 patient) but no patient required intubation and mechanical ventilation (Table 2).

Regarding HR and MBP, there were no significant differences between the three groups throughout the study period. Patients who experienced bradycardia and/or hypotension (Table 3) did not require pharmacological interference except one patient in GMD who received IV 0.5 mg atropine and only IV infusion of 500 ml normal saline was enough to manage patients who had hypotension. Also, there was an insignificant difference between the three groups in terms of SpO2. VAS scores at rest and with cough were significantly lower in both GMD and GPV than GM. However, when comparing VAS scores at rest and with cough between GMD and GPV, there was no significant difference (Figures 1 and 2).

Table 3: Bradycardia and hypotension in the three groups. 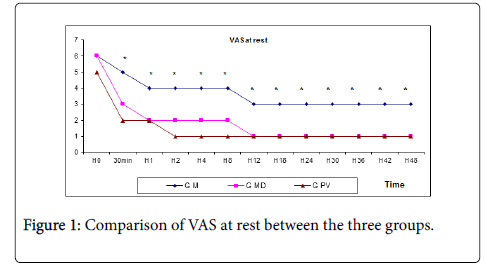 Figure 1: Comparison of VAS at rest between the three groups. 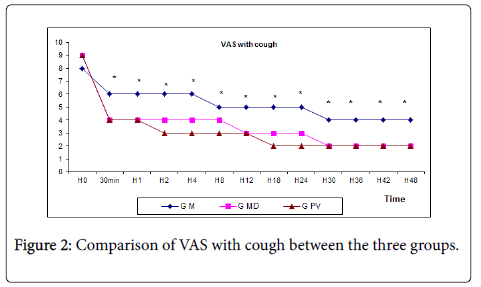 Figure 2: Comparison of VAS with cough between the three groups.

FVC and FEV1 were significantly increased in GMD and GPV than GM; however, there was an insignificant difference when comparing GMD and GPV (Figures 3 and 4). 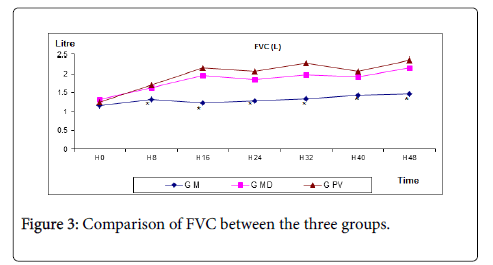 Figure 3: Comparison of FVC between the three groups. 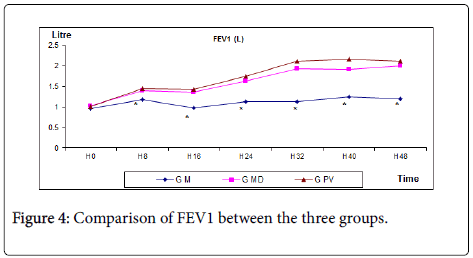 Figure 4: Comparison of FEV1 between the three groups.

Table 4: Comparing changes in PaO2/FiO2 ratio between the three groups.

Table 5: Comparing changes in PaCO2 between the three groups.

Severe torturous pain caused by MRF is a clinical challenge that may result in serious respiratory complications with an increased risk of morbidity and mortality [5,16]. Management of these patients is mainly dependent on urgent and adequate pain control to help them breathe and cough effectively and cooperate for chest physiotherapy in order to maintain normal ventilation [16-18]. Dexmedetomidine has analgesic effect mediated through its action at the level of brain and brain stem, spinal cord and also at peripheral tissues [19] which is not dose-dependent; however, its hemodynamic associated effects are dependent on its dose [20,21].

Our results demonstrated that adding dexmedetomidine to intravenous morphine reduced morphine consumption by approximately 39% and when this combination used for TPVB, morphine consumption reduced more by about 26%. So it’s of great importance to consider paravertebral morphine-dexmedetomidine mixture to manage pain in patients with MRF to avoid the deleterious side effects of a morphine overdose in such patients. To our knowledge, no other study had investigated the combination of dexmedetomidine and morphine for TPVB or IV PCA in patients with MRF.

Our results correlate with T.F Lin et al.; they investigated 100 patients to study the effects of adding dexmedetomidine to morphine for intravenous PCA and its associated side effects. They concluded that dexmedetomidine is a good adjuvant to morphine that can reduce morphine requirements together with better analgesic quality, higher patient satisfaction and lower incidence of nausea and vomiting in patients received morphine-dexmedetomidine mixture [22].

Our results also revealed another fascinating point that adding dexmedetomidine to morphine either IV or paravertebral without dexmedetomidine loading dose helped to avoid the annoying side effect of dexmedetomidine in form of accompanying hypotension and bradycardia [16,21], especially in trauma patients as in our study. This was obvious in our results when analyzed as we found comparable MAP and HR between the three groups throughout the study period with no significant differences.

Our study results were in correspondence with that of Al-Mostafa et al. [27] and Gupta et al. [28] as they concluded that no hemodynamic changes between the groups when using dexmedetomidine and also with that of Kanazei et al. [29] who found comparable values of HR and MAP. They explained this by the use of low dose dexmedetomidine.

Also in our current study, FEV1, FVC and PaO2/FiO2 ratio were significantly higher and PaCO2 was significantly lower in GMD and GPV when compared with GM indicating pulmonary function improvement, better oxygenation, and ventilation when adding dexmedetomidine to morphine either IV or paravertebral.

The addition of dexmedetomidine to morphine for TPVB and IV PCA provided better analgesia and improved spirometry in patients with MRF and also significantly decrease the total morphine consumption with less associated side effects. However, TPVB achieves more reduction in morphine consumption and better patient analgesia satisfaction than IV PCA.

Copyright: © 2017 Mogahed MM, et al. This is an open-access article distributed under the terms of the Creative Commons Attribution License, which permits unrestricted use, distribution, and reproduction in any medium, provided the original author and source are credited.
Top
betsoobetasus girisdumanbetkralbet supertotobet girisbetmatik giris adresimariobetbetturkey giris bahiscom girisasyabahis girisasyabahis giris