Background: Patients with primary immunodeficiency disorders (PIDD) typically require life-long immunoglobulin (IG) replacement therapy. There are two routes of IG administration: intravenous (IVIG) and subcutaneous (SCIG). To better understand routes of IG administration in the real-world, use in a home infusion setting was evaluated.
Objective: To evaluate the safety, efficacy, and perceived responses in PIDD patients on IVIG versus SCIG in a realworld, home infusion setting.
Methods: Retrospective data were collected from 2010 to 2018 from a national home infusion pharmacy of PIDD patients receiving IVIG or SCIG therapy for at least 6 months with evaluations for safety, efficacy, and patient perception of response.
Results: A total of 149 patients were identified for analysis: IVIG (n=84) and SCIG (n=65). Overall, patients in the SCIG group had higher rates of local adverse reactions, while patients receiving IVIG had higher rates of systemic adverse reactions. Both SCIG and IVIG were effective as the majority of patients had ≤ 1 infection or hospital visit within the study period. However, patients in the SCIG group had fewer hospital visits and lower rates of infections overall. Patients receiving SCIG also perceived a faster speed of response.
Conclusion: SCIG infusions are safe, efficacious, and well tolerated when compared to IVIG, providing PIDD patients with an alternative route of IG administration. Notably, hospital visits and infection rates were significantly reduced in patients receiving SCIG. The overall findings of this study contribute to growing evidence that demonstrates the benefits of SCIG in adult and pediatric patients with PIDD.

Primary immunodeficiency disorders (PIDD) include a heterogenous group of inherited disorders with deficiencies in one or more components of the immune system, which increases a patient ’ s susceptibility to infections [1-3]. There are approximately 350 distinct forms of PIDD [1,4,5]. Life expectancy is reduced and recurrent infections cause significant morbidity and disability due to various complications including chronic lung disease, inflammatory bowel disease, and autoimmune disorders [2,6,7]. Therefore, patients with PIDD require life-long immunoglobulin (IG) replacement therapy to prevent recurrent infections, notably bacterial infections of the respiratory tract [3,6-9].

Currently, there are two routes of IG administration in the United States (US): intravenous (IVIG) and subcutaneous (SCIG). In the early 1980s, IVIG was introduced in the US and adopted as the standard treatment at the time [10,11]. SCIG was initially introduced in 1952 by Colonel Bruton who used a 16% solution for the treatment of a boy with agammaglobulinemia which demonstrated a beneficial effect [12]. Because SCIG infusions were relatively slow, and the volume that could be infused in a single infusion was limited, the IVIG route became more popular in the US. However, during the 1990s, SCIG slowly gained popularity among patients, with the first SCIG product approval in 2006 [13,14]. Since the advent of IG therapies, there has been a decrease in morbidity from infections, increased survival, and improvement in overall quality of life (QoL) [2,9]. Survival of patients with antibody deficiencies has increased dramatically since the introduction of IG replacement therapy, and the efficacy of IVIG and SCIG in preventing serious bacterial infections is well established [2,6,7,13,14].

Clinical trials of SCIG administered weekly have shown comparable efficacy versus IVIG in preventing and/or minimizing serious bacterial infections, hospitalizations due to infection, days missed from work/school, and days on antibiotics in patients with antibody deficiency [2,9,14]. Although clinical studies have demonstrated comparable efficacy and tolerability between IVIG and SCIG, there is limited literature published using real-world data [13,15]. To better understand the use of these therapies in a real-world, home infusion setting, our study objectives were to evaluate the comparative safety, efficacy, and outcome perceptions in PIDD patients treated with IVIG and/or SCIG in the US.

A retrospective observational study was conducted using patient electronic medical records (EMR) provided by KabaFusion, LLC, (KabaFusion) a national home infusion provider that specializes in IG therapy. KabaFusion has pharmacies throughout the country and provides patient-focused services in 40 states. Study data included therapy information (e.g., type of therapy, route of administration, dose, number of infusions), switching rates, patient characteristics (e.g., age, diagnosis, gender, state of residence, comorbidities), local/systemic adverse reactions, hospital visits (both outpatient and inpatient visits), types of infections, and patient perception of response. The protocol for this study was assessed by an Independent Review Board (IntegReview) and received an exemption according to 45 CFR 46.101(b).

Data from adult and pediatric patients with PIDD, who received IVIG or SCIG therapy from KabaFusion, LLC for at least 6 months (between July 1, 2010 and July 31, 2018) were selected for inclusion in this study. Patients with incomplete data (within the medical record assessments) or missing data (due to patients being discharged or transferred to another home infusion provider) were excluded from this study.

There were three main study outcomes assessed between the two study groups: safety, efficacy, and patient perception of response. Safety outcomes were defined as percentages of patients receiving IVIG versus SCIG who experienced local and systemic adverse reactions. Efficacy outcomes were defined as rates of hospital visits, incidence of infection, and types of infections. Perception of response outcomes were gathered and recorded in a patient’s EMR by the infusion nurse or pharmacist. Due to the retrospective nature of the study, these outcomes were not available for every patient. However, recorded variables included energy levels (low, normal/moderate, or high), pain (scale of 0-10), gastrointestinal symptoms (yes/no), and perception of speed of response. The speed of response was noted as the time period between the start of therapy and the patient’s perception of significant improvement in symptoms (e.g., general health/ well-being, fewer recurrent infections, and/or fewer antibiotic prescriptions). These changes were reported to either a nurse or a pharmacist and recorded in the patient’s EMR.

Baseline demographics were recorded prior to the start of IVIG or SCIG therapy. Unadjusted descriptive statistics were conducted to summarize the demographics between the two study groups, such as mean and standard deviation (SD) for continuous variables, and percentages for categorical variables. Statistical differences were evaluated using Student’s t test for continuous variables; chi-square and Fisher’s exact tests were used for categorical variables. Analyses were conducted using SAS 9.4 software (SAS Institute, Cary, North Carolina). An unpaired two-sided p value <0.05 was considered statistically significant. 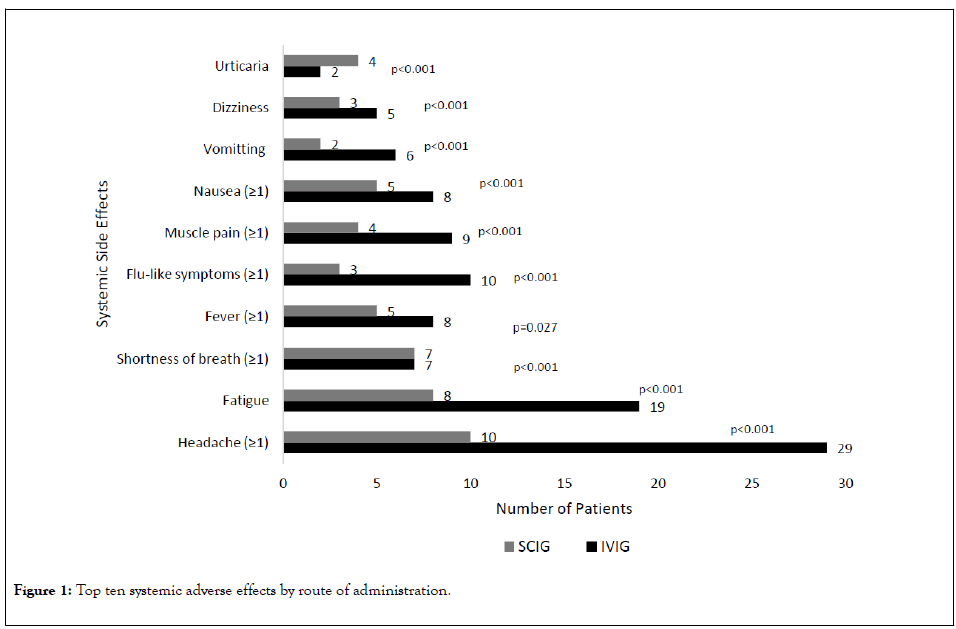 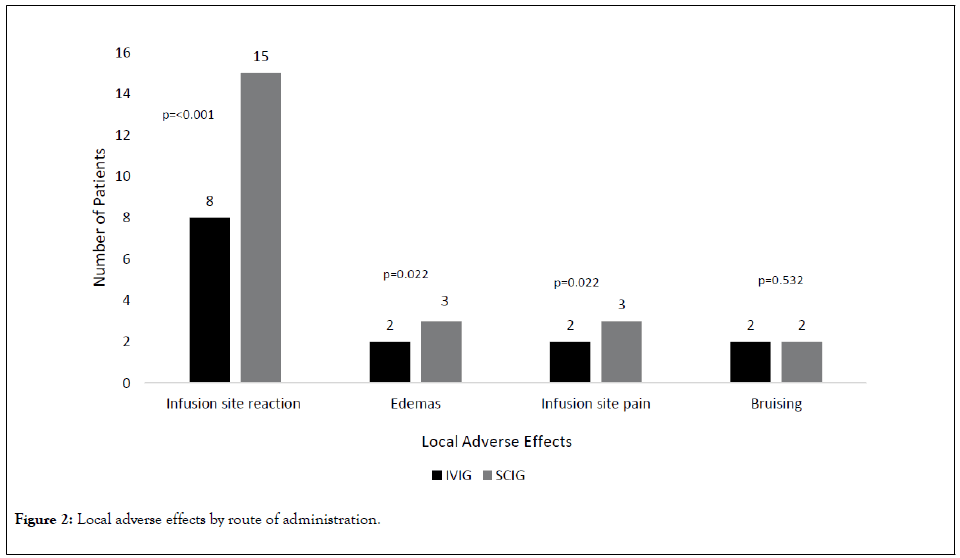 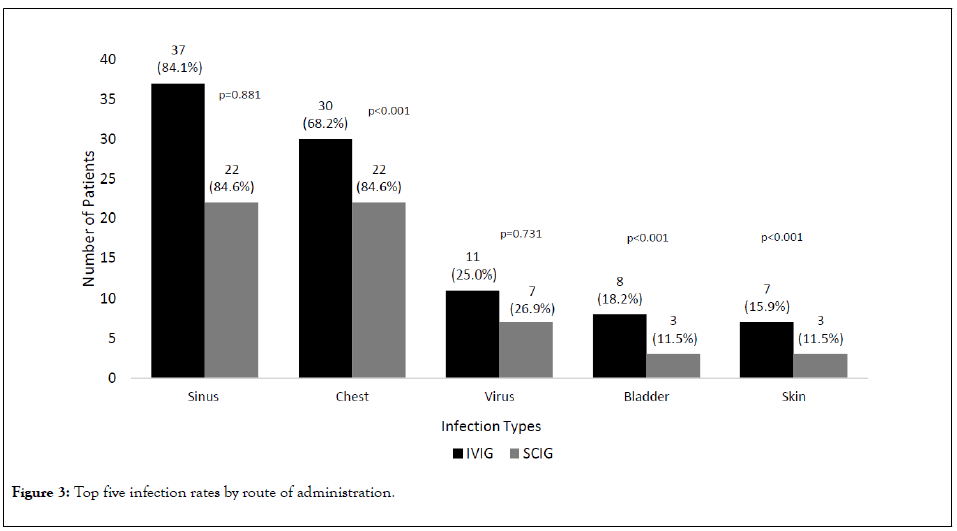 Patient outcomes and perception of response

This study evaluated safety, efficacy, and patient-reported outcomes/perception of response using real-world data from a national specialty home infusion pharmacy in the US. Thus, unlike data generated from a particular IVIG or SCIG manufacturer, or single-center provider experiences, the outcomes reflect the use of multiple products in alternate care settings across the US. The use of home infusion services is continuing to increase, in part because of the growing use of SCIG and the availability of home health nursing. This study demonstrated that SCIG is a viable option or an alternative route of administration for patients with PIDD. SCIG was shown to be safe and effective and demonstrated advantages in patient-reported outcomes compared to IVIG, which is consistent with previously reported data [2,7,16,17].

Numerous studies have demonstrated the acceptability of SCIG, as well as its improvements in overall QoL measures [2,16-18]. Prior studies have used standardized validated QoL surveys before starting SCIG and again after 6-12 months [2,18]. Patients on SCIG reported improvements in their feeling of general well-being when compared to IVIG [2,17-21]. Due to the retrospective nature of the study, patient-reported data was not collected from all patients. However, the data collected demonstrated statistical significance with maintenance of normal/moderate levels of energy, less pain, less gastrointestinal symptoms, and faster speed of response with the use of SCIG compared to IVIG.

In our study, the majority of patients (n=124 (83.2%)) did not switch routes of administration. However, converting patients to SCIG from IVIG may be considered advantageous in terms of convenience for patents and their caregivers, while maintaining effectiveness and safety of therapy [22]. Our results demonstrated that SCIG patients had a higher proportion of patients on therapy for a longer period of time (≥ 36 months) versus IVIG.

The limitations of this study include its retrospective nature. Additionally, data retrieval and collection represent possible limitations. In some instances, information was not included in the EMR and/or not obtained in all patients. For this reason, conclusions cannot be imputed or generalized from all study patients. In addition, hospital visits and infections could be attributed to external factors, which cannot be controlled in the real-world setting. Further research is warranted to evaluate the association of patient characteristics and comorbidities with safety and efficacy outcomes.

There have been significant improvements in the treatment of PIDD in the past 60 years, due in large part to IG therapy. It is important to note that both routes of administration have advantages and disadvantages. Various authors have indicated that a patient’s preference is a fundamental factor to take into account, along with clinical criteria, when choosing the route of administration for IG therapy [22]. IVIG may have some limitations in pediatric or elderly patients due to poor venous access, higher expected rates of systemic adverse reactions, and the amount of time it takes for patients to complete infusions. SCIG does not require venous access and is associated with slower release of IG into systemic circulation, creating a depot effect, resulting in more consistent serum steady state levels. The more consistent steady state levels can be associated with lower rates of breakthrough infections and lower rates of wear-off effect [14,17]. Concurrently, the slower release of IG into systemic circulation also results in a lower pharmacokinetic peak concentration in the serum, potentially associated with lower incidence of systemic adverse reactions. In summary, both therapies can be administered at home. However, because of differences in safety profile, route of administration and reduction in the rate of infections, healthcare providers can tailor a therapeutic regimen to suit a patient ’ s lifestyle and medical condition.

In conclusion, in a real-world, home infusion settings, SCIG infusions are safe, efficacious, and well tolerated compared to IVIG and provide PIDD patients with an alternative option for therapy. This study revealed that SCIG demonstrated a beneficial profile in tolerability and efficacy compared to IVIG. Notably, hospital visits and infection rates were significantly reduced in patients receiving SCIG. The overall findings of this study contribute to growing evidence demonstrating the acceptability of SCIG in adult and pediatric patients with PIDD.

This project was generously supported by a grant from CSL Behring, Inc. We also acknowledge the support of Shireen Dunwoody of Dunwoody Consulting for medical writing assistance for the protocol, data interpretation and review, and assistance with development, review, and revisions of the manuscript.

Copyright: © 2020 Geng B et al. This is an open-access article distributed under the terms of the Creative Commons Attribution License, which permits unrestricted use, distribution, and reproduction in any medium, provided the original author and source are credited.

Sources of funding : This project was generously supported by a grant from CSL Behring, Inc. We also acknowledge the support of Shireen Dunwoody of Dunwoody Consulting for medical writing assistance for the protocol, data interpretation and review, and assistance with development, review, and revisions of the manuscript.