There is a large body of literature that describes the short-term complications (e.g., pancreatic or biliary anastomotic leaks) that occur after PD, but little has been published regarding long-term anastomotic complications. Stenosis of the anastomosis is often asymptomatic but symptomatic and painful presentations are difficult to treat, and the optimal treatment is not currently defined. The aim of this work is to report case of pancreatojejunostomy stenosis. The Pancreatic enteric anastomosis stenosis was diagnosed following presentation with pancreatitis that developed following pancreatoduodenectomy. The patient was treated surgically by fashioning side to side pancreatogastrostomy.

Mild acute pancreatitis is defined as pancreatic edema, without organic failure and without local complications [1] and its management consists in three basic elements: hydration, analgesia and intestinal rest [2-7].

The concept of pancreatic rest, assumes a reduction in inflammation, pain and enzymatic secretion in the parenchyma and peripancreatic tissue. Recent studies have demonstrated that comparing fasting against the initiation of early enteral nutrition, there is no significant difference in the pancreatitis reactivation [7-11], also demonstrated that there is better immunologic response with early feeding, reducing infectious processes (bacteremia, pneumonia, and infected pancreatic necrosis) and general mortality [12,13].

Despite the above mentioned, the exact time of the realimentation, has not been completely defined, so the objective of the present work was to evaluate tolerance and disease reactivation with immediate oral feeding (8 hrs) in patients with mild acute biliary pancreatitis, in comparison with early oral feeding at 48 hours.

The present study was realized at the Central Hospital “Dr. Ignacio Morones Prieto,” a third level of attention hospital. This was a controlled, double blind, randomized clinical trial. We included patients older than 15 years, any sex and with diagnosis of mild acute pancreatitis according to the Ranson, APACHE II and BISAP scales [1,14,15]. All participants had a hepatic and biliary ultrasound to determine the biliary etiology. We excluded patients with pancreatitis of nonbiliary etiology, severe pancreatitis, choledocholithiasis demonstrated during the hospital stay or with other comorbidities.

The patients were randomized in two groups: Group A: early oral feeding: realimentation at 48 hours that beging with liquid diet and Group B: immediate oral feeding: realimentation at 8 hours with enteral formula, calculated according to basal requirements (25 Kcal/Kg of weight) through the use of commercial standard polymeric formula (Enterex Diabetic®, Pisa Pharmaceutical).

In both groups we measured basal C-reactive protein, leucocytes and they were repeated at 8, 24 and 48 hours.

All patients have the same initial management with parenteral 250 ml/hr of the Hartmann solution, a proton-pump inhibitor 40 mg IV daily, analgesia with metamizole 2 gr iv every 6 hrs. and metoclopramide 10 mg iv every 8 hours.

In both groups the diet tolerance was determined, if patients has absence of pain, nausea, vomit and they were hungry. We analyzed also the reactivation of the pancreatitis, which was considered if the characteristically epigastric tansfictive pain, irradiated to the left hypochondrial region come back after beginning the oral intake as the reappearance or with the presence of systemic inflammatory response syndrome or leucocyte elevation. We measure the time of the disease resolution, since the taking in to account from the day of admission in the emergency room to the day it tolerated diet and didn’t show signs of systemic inflammatory response, nausea, vomit or pain. The cholecystectomy with intra operative cholangiography after having diet tolerance, and we measured total hospital stay from hospital admission to the cholecystectomy and total hospital stay.

The methodical analysis was done using the statistical package JMP version 8 (SAS Institute Inc., Cary, NC, USA), utilizing the “t” Student test for numeric variables with normal distribution, or U of Mann Whitney in other cases. The categorical variables were analyzed with Chi Square or the Fischer exact test, according the expected numbers per cell. We considered as statistical significance a p less than 0.05.

The present work was authorized by the Ethics committee of the Hospital (Reg 07-15) and informed consent was acquired from all the patients.

Table 1: Basals data of the both groups.

We have 8 patients (13.5%) who presented failure to refeeding because they continued with abdominal pain, 5 patients of the group of early feeding (16%) and 3 of immediate feeding (10.3%) without a statistical difference (p=0.4). 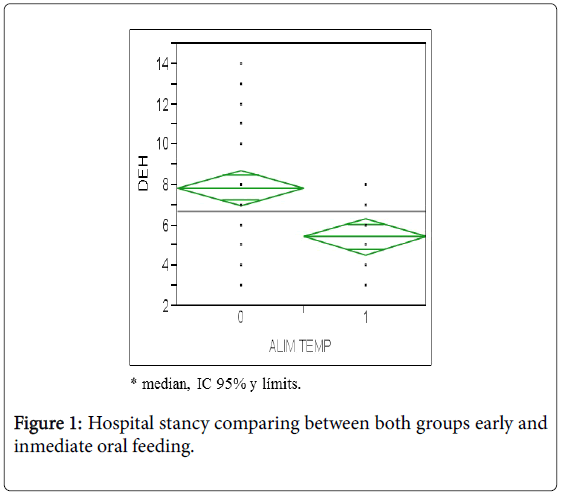 In the patients follow up (within a month) we registered 2 readmissions, both of them in the early feeding group, for residual choledocholithiasis not documented at the first admission and both of them resolved by endoscopic cholangiography.

We did not document any local complications, like peripancreatic collections, it wasn’t reported in the ultrasounds and because is a mild pancreatitis we didn’t make a CT scan.

The objective of fasting, with the traditional and fundamental management of acute pancreatitis, has been “rest to the pancreatic gland” not permitting enzymatic secretion in response to cholecystokinin stimuli and minimizing stress of the gland, with the goal to decrease the auto digestion of the pancreas, and the exacerbation of tissue damage [8]. Even though the starting fasting is standardized, and generally well tolerated in patients with mild acute pancreatitis, the time necessary for refeeding the patient to avoid reactivation or exacerbation of the disease has been poorly studied in randomized clinical studies. Nevertheless, the actual studies suggests that in acute pancreatitis the secretion of zymogens in response to food has been slowed down, which allowed us to evaluate the early start of feeding, once the first fase of management has been start with hydration, analgesia and antiemetics, even without complete reduction of inflammatory parameters, as shown in other studies [16].

Our groups were homogenous in their basal characteristics, without differences in severity scales. All the patients received the same management, so the observed results could not be explained by unbalances in this potential confounders.

In previous studies performed, we have observed that pain reactivation during early feeding can occur in up to 19% of cases 11; in our study only 13.5% of the patients presented failure to refeeding because they continued with abdominal pain without a statistical significative difference and no ones have reactivation of the pancreatitis, which suggest a security in the start of nutritional oral intake at the first 8 hours of start the management of pancreatitis.

The obtained results with the measurement of the indirect acute fase reactants, like leucocytes count and C-reactive protein, had no significative differences comparing both groups, in their initial and 48 hour measurements respectively, but did show a tendency to be in lower counts to leucocytes and C-reactive protein for the group of immediate feeding. This matches with the information reported by Petrov, Windsor and cols, that suggested that early feeding play an immunomodulator role17 that attenuate the inflammatory response in patients with severe pancreatitis [13,17].

Even so we cannot be cathegorical with our study by mentioning that immediate feeding accelerates the period in which the pancreatitis remits, we can observe that there is no mayor reactivation of the disease and that there are no deleterious effects, when the patient don`t have any inflammatory response, the pain and nausea is under control and the patient has appetite.

We observed that de Ranson score and EVA were minor in the immediate feeding group.

In conclusion, our study suggests that introducing feeding in an immediate manner in patients with mild acute pancreatitis of biliary origin, is well tolerated and secure, and does not affect negatively the course of the disease, based clinical parameters like pain, systemic inflammatory response, vomiting, and biochemical parameters like leucocyte counts and CRP.

Other studies will have to evaluate the behavior of interleukin-6, as an indicator of inflammation.

Copyright: © 2017 David E, et al. This is an open-access article distributed under the terms of the Creative Commons Attribution License, which permits unrestricted use, distribution, and reproduction in any medium, provided the original author and source are credited.
Top