In this study, we found that the amount of isoflavones in (1) steaming germinated soybean was higher than that of (2) soybean boiled in water and (3) steamed soybean. Moreover, genistein, a major soy isoflavone, selectively inhibited the activity of human topo II. Therefore, steaming germinated soybean, which has high amount of genistein, might be a cancer preventive food through the inhibition of topo II activity.

Cancer is a major public health problem worldwide. Epidemiologic and animal studies indicate that vegetables and fruits with chemo preventive natural products, alone or in combination with others, are associated with a reduced risk of cancer development [1,2]. For more than 15 years, we have been screening natural phytochemical products in vegetables and fruits for inhibitors of DNA metabolic enzymes, primarily human DNA topoisomerases (topos).

Topos are nuclear enzymes that alter the DNA topology required for the replication, transcription, recombination, and segregation of daughter chromosomes [3]. Eukaryotic cells have 2 types of topos, I and II. Topo I catalyzes the passage of the DNA strand through a transient single-strand break in the absence of any high-energy cofactor. Topo II, in contrast, catalyzes the passage of DNA double strands through a transient double-strand break in the presence of ATP. Selective inhibitors of topos are considered potentially useful anticancer, antiviral, anti parasitic, and antipregnancy agents because some are known to suppress human cancer and normal cell proliferation and are cytotoxic [4] (Figure 1).

In screening for topo inhibitors from plant food materials, we found that ethanol extract from soybean inhibited the activity. In this report, we focused on soy isoflavonoids, which are known to have anticancer properties [5], and investigated whether human topo activity was inhibited by 3 types of processed soybeans, (1) boiled in water, (2) steamed, and (3) steaming germinated, for the development of healthy anticancer foods.

The ethanol-extracted soybean samples (10 μg each) were spotted onto a TLC plate, precoated with Silica-Gel 60, and the plate was then developed using a mixed solvent of chloroform/methanol (20/1, v/v) as the mobile phase. The separated organic compounds were detected using a 50% sulfuric acid spray and heated at 120°C for 5 min.

The catalytic activity of topo I was determined by detecting supercoiled plasmid DNA (Form I) in its nicked form (Form II) [6]. The topo I reaction was performed in a 20 μL reaction mixture that contained 10 mM Tris-HCl (pH 7.9), pBR322 DNA (250 ng), 1 mM EDTA, 150 mM NaCl, 0.1% bovine serum albumin, 0.l mM spermidine, 5% glycerol, 2 μL of one of the test compounds dissolved in DMSO, and 2 units of topo I. The catalytic activity of topo II was analyzed in the same manner, except that the reaction mixture contained 50 mM Tris-HCl (pH 8.0), 120 mM KCl, 10 mM MgCl2, 0.5 mM ATP, 0.5 mM dithiothreitol, supercoiled pBR322 DNA (250 ng), and 2 units of topo II [6]. The reaction mixtures were incubated at 37°C for 30 min, followed by digestion with 1% sodium dodecyl sulfate (SDS) and 1 mg/mL proteinase K. After digestion, 2 μL loading buffer, consisting of 5% sarkosyl, 0.0025% bromophenol blue, and 25% glycerol, was added. To study the binding of enzymes to DNA based on mobility shifts, the same procedure was followed, but SDS denaturation and proteinase K digestion were omitted. The mixtures were subjected to 1% agarose gel electrophoresis in Tris/borate/EDTA buffer. The agarose gel was stained with ethidium bromide and the DNA band shifts from Form I to Form II by topos I and II were detected using an enhanced chemiluminescence detection system (Perkin Elmer Life Sciences Inc., Waltham, MA, USA). Zero-D scan (Version 1.0, M & S Instruments Trading Inc., Osaka, Japan) was used for densitometric quantitation.

We prepared ethanol extracts of (1) soybean boiled in water, (2) steamed soybean, and (3) steaming germinated soybean and compared the components by TLC. As shown in Figure 1, some fat-soluble compounds were detected, and major spots were purified and identified using NMR. The main component of these 3 processed soybean extracts was triacylglycerol (Rf=0.79 to 0.92). Interestingly, the highest content of soy isoflavones (Rf=0.26) was found in steaming germinated soybean, and the isoflavones contents could be ranked in the following order: steaming germinated soybean > steamed soybean > soybean boiled in water. The isoflavone amounts in these processed soybeans were measured by high-pressure liquid chromatography (HPLC), and the obtained results showed the same order as that of the TLC analysis. These data suggest that soy isoflavones are dissolved in the broth on boiling in water; therefore, soybean boiled in water is lowest in isoflavone content. The amounts of isoflavones in soybean can be increased by the treatment processes of both steaming and germinating (Figure 2). 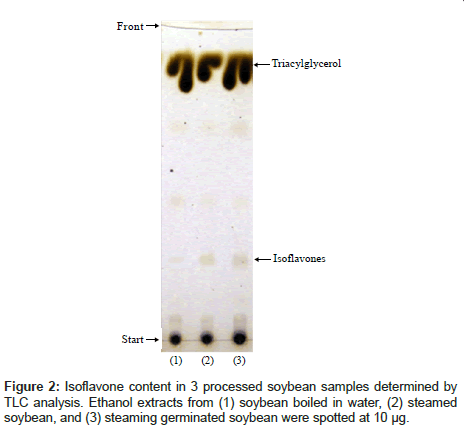 The inhibitory effects of ethanol extracts from the 3 processed soybean samples were examined against human topos I and II, which have single-stranded and double-stranded DNA nicking activity, respectively [3]. Even at concentrations greater than 100 μg/mL, the extracts had no effect on topo I activity. In contrast, topo II activity was inhibited by these extracts, and the topo II inhibition could be ranked as follows: steaming germinated soybean > steamed soybean > soybean boiled in water (Table 1). The tendency for topo II inhibition by these extracts showed a positive correlation with the amount of soy isoflavones (Figure 1). Therefore, we investigated the topo inhibitory activity by 3 major soybean isoflavones, daidzein, genistein, and glycitein. As shown in Table 1, genistein potently inhibited topo II activity, but daidzein and glycitein did not influence it. On the other hand, topo I activity was not affected by these 3 isoflavones.

Table 1: IC50 values of 3 processed soybean samples and soy isoflavones for the activity of human topos I and II

Soybeans contain the highest concentrations (1-3 mg/g) of isoflavones such as daidzein, genistein, glycitein, and their corresponding glycosides, such as daidzin, genistin, and glycitin, respectively, among foods consumed by humans. According to USDA data [7], total soybean isoflavones contain 37% daidzein, 57% genistein, and 6% glycitein; therefore, the main component of soy isoflavone is genistein. Genistein has many physiological actions such as estrogen action, anti-oxidation, mutation prevention, anti-infection, and the prevention and rehabilitation of heart-cerebrovascular disorders [8,9]. This suggests that genistein might be useful in healthcare applications.

In this study, we found that the amount of isoflavones in steaming germinated soybean was higher than that of soybean boiled in water and steamed soybean, and that genistein, a major soy isoflavone, selectively inhibited the activity of human topo II. Therefore, steaming germinated soybean, which has a high amount of genistein might be an anticancer functional food through the inhibition of topo II activity.

This work was supported by Grants-in-Aid 2013 from the Hyogo Science and Technology Association (Japan).

Copyright: © 2013 Kuriyama I, et al. This is an open-access article distributed under the terms of the Creative Commons Attribution License, which permits unrestricted use, distribution, and reproduction in any medium, provided the original author and source are credited.
Top