Objective: Cold therapy has been pointed out as beneficial treatment for acute injuries. Stretching exercises have been widely used during last decades for prevention and recovery purposes. Functional performance tests have evolved in a mode of determining an athlete´s functional ability. The purpose of this study was to assess the influence of ice immersion and a guided-stretching exercises protocol to the lower extremity on functional performance in a student, female population.
Methods: Twenty-five female physical activity students volunteered to participate in this study. We used a pretestpostest design with an untreated control group. Before and immediately following the treatment, subjects performed these functional performance tests: the squat jump (SJ), the counter-movement jump (CMJ), 30-m sprint, and 1000- m run. Subjects were randomly assigned to either a control group (n=9) or 2 experimental groups: ice immersion/no stretching (n=8); no ice immersion/stretching (n=8). The experiment was repeated two hours later the same day and two days later. The postest procedures were performed as previously described. The average of the two test trials for jumping functional performance tests was used for comparison.
Results: Results showed no significant differences among these routines on functional performance scores. ANOVA analysis revealed no significant differences among these routines on functional performance scores. The 30-m sprint (p<0.24) and 1000-m run (p<0.01) scores were significantly improved in control group on day 1, and SJ test data showed a marked reduction (p<0.01).
Conclusion: Immediate effects of cold immersion and guided-stretching exercises on functional performance in the lower extremity should be considered with caution. Further research is necessary to investigate the possible mechanisms and any short-term effect caused by these approaches.

Since the Greek era, cold therapy has been pointed out as beneficial treatment for acute injuries. Ice immersion is one of the most effective cryotherapeutic agents [1]. The effects of ice have been demonstrated in numerous animal models [2,3] and human studies [4]. Ice reduces tissue temperature, blood flow, pain, and metabolism, and has demonstrated positive effects on return to participation. However, modes, durations, and frequencies of ice application to optimize outcomes after injury are not well established [5]. On the other hand, its role as a recovery method has yet to be determined.

Stretching exercises have been widely used during last decades for prevention and recovery purposes [6,7]. Recent literature indicates that static stretching prior to athletic performance can result in deficits for force, jump height, reaction and movement time and balance, among others [8], and its preventive role against muscle injury has been seriously questioned [9].

Functional performance tests have evolved in a mode of determining an athlete´s functional ability. These procedures allow sport professionals to evaluate some athlete´s performance on physical activities that simulate the real solicitation that those structures will assume. Researchers have proposed some of these tests as reliable tools and indicators of lower extremity function, due to their relatively high test-retest intraclass correlations and low standard error of measurements. Recent studies concerning functional bracing have used such testing protocols to study certain interventions [10].

The purpose of this study was to assess the influence of ice immersion and a guided-stretching exercises protocol to the lower extremity on functional performance in a student, female population.

Twenty-five female, healthy physical activity students volunteered to participate in this study (mean ± s age 20.88 ± 3.82 yr, height 163.82 ± 5.58 cm, mass 56.83 ± 6.05 kg). All subjects completed a self-assessment evaluation form to ensure their health status. Subjects were excluded from the study only if they had an injury or illness that prevented safe participation in data collection (i.e., current extremity injury).

We used a pretest-postest design with an untreated control group. Baseline data are shown in Table 1. Before and immediately following the treatment, subjects performed certain functional performance tests: the squat jump (SJ), the counter-movement jump (CMJ), 30-m sprint, and 1000-m run. Subjects were randomly assigned to either a control group or two experimental groups (Figure 1): Control condition – CC (no ice immersion/no stretching): 20 minutes of rest in a chair; Experimental condition 1–EC1 (ice immersion/no stretching), 5 minutes of ice immersion to the waist level in a cold submersion tank of 13°C for 5 minutes; and Experimental condition 2–EC2 (no ice immersion/stretching), guided-stretching exercises for each of the main muscle groups in the lower limbs (hip flexors, quads, hamstrings, adductors, triceps surae). All the stretches were performed statically and bilaterally, with 2 repetitions of 20 seconds allotted for each side. The experiment was repeated two hours later the same day. The postest procedures were performed as previously described. Two days later the whole experience was developed at the same time of the day. All subjects were told no to exercise until the end of the study.

The values are given as means (±SD). 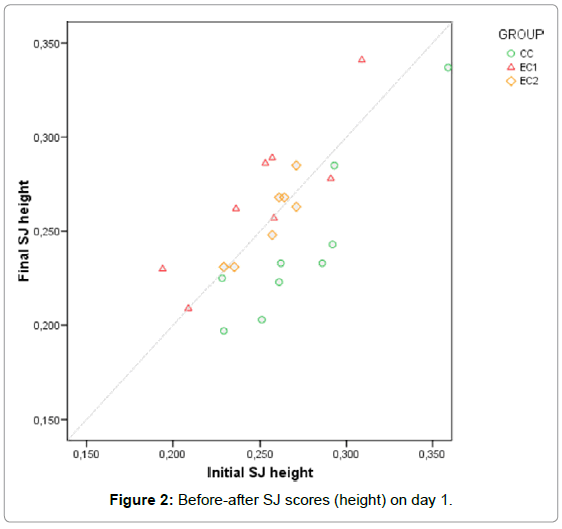 The post-hoc analysis revealed that SJ (p<0.28) and CMJ (p<0.01) scores in terms of flight time were significantly greater in EC1 when compared to CC group scores for the first journey (figure 3). On day 3 the same data showed greater scores for SJ (p<0.04) and CMJ (p<0.31) in terms of jump height in EC1 group with regards to CC group. 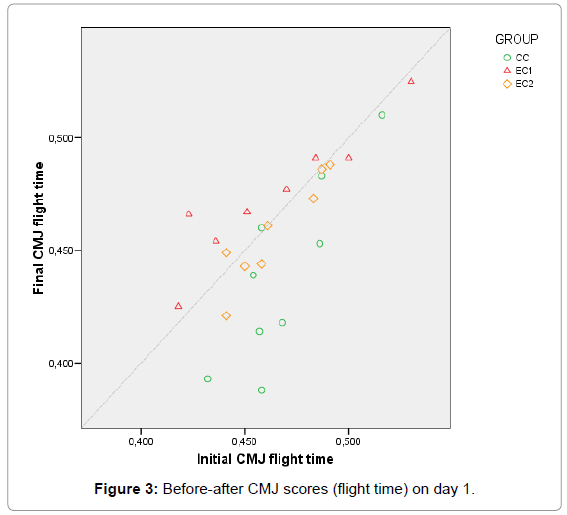 Cold and stretching effects on the muscle spindle and the myotatic reflex are of great importance when considering the muscle’s physiology. But from a practical point of view, this influence on jumping, anaerobic and aerobic capacities should be discussed. It has been stated that a relatively brief period of cold-water immersion can manifest significant physiological effects that can impair cycling performance [11]. Crowe et al. observed a significant decrease in anaerobic performance among cyclists sprinting with one-hour recovery between tests [12]. Differences between CC and EC1 or EC2 with regards to 30 m-sprints were not significant. A study by Yamane et al. showed that post-exercise leg and forearm flexor muscle cooling attenuates endurance and resistance training effects on muscle performance and on circulatory adaptation [13]. We detected no short-term effects on 1000-m run. Cooling causes an increase in intracellular pH and prevents the delayed muscle edema, so that it has no dramatic effect, but some minor effects on reducing exercise-induced muscle edema in the sub-acute phase and relieving the extent of the damaged muscle cells [14]. The application of cryotherapy and reduced sensation of pressure appear to have little effect on motor control of the digits. These results support the hypothesis that the use of cold is not contraindicated for use as an analgesic before submaximal rehabilitative exercise focusing on restoring neuromuscular control to injured tissues [15]. A decrease in jumping height following ice immersion has been reported by Cross et al. Impairment of the muscle spindle’s ability to invoke the myotatic stretch reflex during the preparatory crouch may represent the cause of a decreased amount of “recoil” energy which could be elicited. Cold-water immersion immediately after prolonged intermittent shuttle running have demonstrated some reduction in certain indices of exercise-induced muscle damage [16]. We found no significant influence in our series.

Stretching routines have shown contradictory results in the peerreviewed literature. According to Nelson et al., it appears that preevent stretching might negatively impact the performance of highpower short-term exercise. Stretching-induced also decreases in force production and muscle activation, probably due to a central nervous system inhibitory mechanism [17]. Cornwell et al. found that pre-event stretching induced a significant decrease in jump height for both the standing jump (4.4%) and counter-movement jump (4.3%) [18]. Young and Behm also compared various warm-up protocols, and found that static stretching had a negative influence on vertical jump performance [19]. On the contrary, Gonzalez-Rave et al. demonstrated no significant effect of stretching exercises on SJs and CMJs [10], as our above mentioned results.

Previous research is inconclusive on whether gender differences exist in response to ice-water immersion [20]. However, strogens have demonstrated their influence in blood flow through vascular tone modulation [21]. This fact may play a role in female cohorts and may explain some hypothetical deficit in postmenopausal women receiving this type of cold treatment.

There were several limitations in this study. One such limitation is the small sample size of 25 subjects, which did not allow for a more powerful statistical analysis. The population consisted of a convenience sample from one of our Faculties in our area, which was mainly comprised of Caucasian, healthy, females, ages 18-26. The size, convenience, and homogeneity of the sample limit the generalizability of this study. A larger simple size would have been a better representation of the population as well as balance the atypical values more than a smaller simple size would. Another limitation was that the measurements and intervention were made without blinding of the researcher to the experimental groups, which has the potential for bias. Otherwise, potential bias was minimized by random assignment of participants and the following of standardized protocol by the investigator.

The results of this study suggest that immediate effects of cold immersion and guided-stretching exercises on functional performance in the lower extremity should be considered with caution. Further research is necessary to investigate the possible mechanisms and any short-term effect caused by these approaches.

Copyright: © 2015 Medina-Porqueres I, et al. This is an open-access article distributed under the terms of the Creative Commons Attribution License, which permits unrestricted use, distribution, and reproduction in any medium, provided the original author and source are credited.