The present study deals with the optimization of adventitious shoots cultures of Centella asiatica for maximum shoot proliferation under the influence of different nutrient manipulation. The effects of nitrogen source (NH4NO3/KNO3), carbon (sucrose), potassium source (KNO3), phosphorous source (KH2PO4), macronutrient (MgSO4) and micronutrient (MnSO4) of Murashige and Skoog (MS) media on shoot growth were investigated and these experiment treatments were supplemented with 1 mg/l 6-benzylaminopurine (BAP) plant hormones. The shoot growth was influenced by relative ratio of NH4+:NO3- with maximum shoot number (47.6 ± 1.52) in medium containing 100 mM (40 mM NH4NO3:60 mM KNO3) nitrogen source when NO3- concentration is higher than NH4+ ions. The MS media with 3% sucrose content showed optimum shoot multiplication (36 ± 1), as with increase in carbon concentration in the media, the shoot proliferation was drastically reduced. In case of media with 30% potassium (KNO3) highest number of shoots (31.66 ± 1.52) observed and in case of 150% phosphorous (KH2PO4) highest shoot number (28 ± 1) obtained respectively. The influence of metal ions like Mg2+ and Mn2+ showed maximum number of shoots (31 ± 1) in media with 1.5 mM magnesium (MgSO4) and shoot number (43 ± 2) in 200 μM manganese (MnSO4) respectively.

Centella asiatica is a small edible, annual herbaceous medicinal plant belonging to Apiaceae family found in moist places up to an altitude of 1800 m [1]. It has orbicular or reniform shaped, yellowish green colored leaves and white or light purple to pink flowers arranged in simple umbels and also bears small oval fruit [1,2]. This plant is native to India, Sri Lanka, Iran, New Guinea, Australia and Indonesia southern and central Africa [3]. It was ranked third position in a priority list of most essential Indian medicinal plants based on their pharmaceutical and economic importance [4]. This plant is listed as threatened plant species by the International Union for Conservation of Nature and Natural Resources (IUCN) [5]. The pharmaceutical companies collecting their raw material from wild populations growing near filthy ditches are sometimes contaminated with heavy metal and chemical pollutants which affects their medicinal efficacy during its formulations, therefore plant tissue culture techniques are an alternative approach to meet the current market demands of the plant biomass as well as its secondary metabolites [6].

The in vitro grown cultures of Centella asiatica , accession number 347492 was collected from NBPGR (National Bureau of Plant Genetic Resources), New Delhi, India. Experiments on the effect of nitrogen, carbon, potassium, phosphorous, magnesium and manganese were performed in triplicates for a period of 8 weeks. The Murashige and Skoog (MS) media was prepared according to the respective nutrient manipulation while maintaining the other nutrients at a constant level. All the treatments were supplemented with 1 mg/l 6- benzylaminopurine (BAP) hormone. To analyze the effect of relative ratios of NO3 and NH4 ions on shoot growth, the amount of ammonium nitrate: potassium nitrate (NH4NO3:KNO3) salts was varied to 20 mM (0:20), 40 mM (20:20), 50 mM (20:30), 60 mM (20:40) (control) and 100 mM (40:60) in MS media respectively. The control (C) media has 20 mM of NH4NO3 and 40 mM of KNO3 which together makes a total nitrogen concentration of 60 mM. To analyze the effect of carbon content on shoot growth, the sucrose concentration was varied to eight different treatments from 0% to 7% in MS media and the control (C) MS media comprises 3% total sucrose content. To study the effect of potassium, the KNO3 salt in MS media was varied to 0%, 30%, 60%, 100% (C), 150% respectively of which the control (100%) media is provided with 1900 mg/l KNO3 salt. In the treatments with 30% and 60% potassium, in order to compensate the total potassium content in the media, among the major salts, we add (NH4)2SO4 salt instead of KH2PO4 salt. The phosphorous concentration was varied to 0%, 30%, 60%, 100% (C), and 150% respectively of which the control (100%) media is supplemented at 170 mg/l KH2PO4 salt. The macronutrient, magnesium in the MS media was varied to 0 mM, 1 mM (C), 2 mM and 3 mM respectively by varying the MgSO4 salt concentration. To study the effect of micronutrient, manganese on shoot growth, the MnS04 salt in MS media was added at concentrations of 0 μM, 100 μM(C), 200 μM and 300 μM respectively. After solidification of media, sterile shoot nodes of Centella asiatica of accession number 347492 were inoculated vertically into all the culture tubes with different treatments. The shoot cultures were incubated at 262°C under 16 h photoperiod and light intensity of 3000 lux with 55-60% relative humidity. Readings and visual data was recorded after 8th week of inoculation in terms of number of shoot and length of shoots for in vitro growth measurement.

The experiments were independently performed in triplicates and shown in terms of mean ± standard error (M ± SE) and the data were compared using one-way ANOVA (Analysis of variance) with P ≥ 0.05 and Fstat>Fcritical value considered as statistically significant.

In general, Nitrogen, phosphorous and potassium is required in large amounts for appropriate growth and development of plants [18]. Several hypothesis has been stated which assume that in high amount of available nutrients, growth predominates and if nutrients are limiting, growth is restricted more than photosynthesis leading to accumulation of fixed carbon which can used up for synthesizing secondary compounds [19-23]. It has been reported that highest shoot multiplication was observed in the MS media compared to Gamborg’s B5 media and Nitsch media supplemented with 1 mg/l BAP in five different accession of Centella asiatica [10,12]. The results of all the experimental treatments, shown in terms of mean ± standard error (M ± SE) are statistically analyzed using one-way ANOVA and considered as statistically significant when P ≤ 0.05 and Fstat>Fcritical value. The shoot cultures of Centella asiatica with different nutrient treatments were successfully established in MS media supplemented with 1 mg/l BAP hormone as shown in Figure 1. 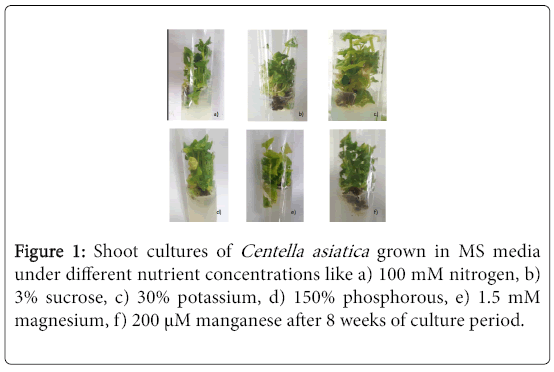 Nitrogen is vital for overall growth of the plant and protein synthesis and it is added as inorganic salts, the nitrate ion and ammonium ion. The MS media with different nitrogen treatments showed constant increase in shoot growth throughout the culture period with maximum shoot number (47.6 ± 1.52) and length (4.6 ± 0.52 cm) in media with 100 mM (40:60) nitrogen concentration followed by 60 mM (20:40 mM) (C) and 40 mM (20:20) treatment after 8 weeks as shown in Table 1. There was an overall increase in shoot development observed with enhanced nitrogen levels in the media, therefore reduction in NH4 ions and enrichment of NO3 ions favored better growth. Studies indicate that high NH4 level in media has depressed calcium, potassium and magnesium uptake thereby restricting the nutrient flow into the tissues and lowers the biomass yield [24-26]. There is a need for a proper balance between the two nitrogen sources (NH4 and NO3) and neither of the two sources can replace each other in the media [6,27]. Prasad et al. [6] reported that biomass production did not have much difference in media with total nitrogen content of 60, 40 and 20 mM.

Table 1: Effect of varying the total nitrogen concentration on shoot growth of C. asiatica after 8 weeks of culture period. *Statistically significant at P ≤ 0.05 and Fstat>Fcritical value.

The carbon source is usually sugars like sucrose, fructose which maintains the osmotic potential of the plants. The 0% and 1% sucrose treatment failed to support any shoot growth since the nodal explants dried up after the 4th week. The 3% (C) sucrose treatment, showed maximum number of shoots (36 ± 1) and shoot length (4.2 ± 0.3 cm), observed to be the most optimum carbon composition for efficient plant growth as shown in Table 2. The beneficial effect of sucrose on shoot growth was assumed to be associated with better carbon availability and higher osmotic stress [28]. With increase in sucrose level from 4 to 6% there was a drastic decrease in shoot induction and 7% sucrose treatment showed least growth as the leaves were turning from green to yellow color by the end of 6th week, may be due to higher sucrose levels that induce stress condition to the plant development. Among the carbon sources, 3% sucrose showed highest shoot generation compared to fructose in Centella asiatica of accession no. 347492 compared to other accessions [8]. It was reported by Prasad et al. [6] that maximum growth rate with 3 times drier biomass observed in media with 5% sucrose than the control followed by 7% sucrose which showed better growth and biomass yield.

Table 2: Effect of varying the total sucrose concentration on shoot growth of C. asiatica after 8 weeks of culture period. *Statistically significant at P ≤ 0.05 and Fstat>Fcritical value.

Potassium being positively charged, balances the negative ions in plants. The media with 30% potassium content showed highest shoot number (31.66 ± 1.52) followed by 100%(C) and 60% potassium treatments and maximum shoot length (3.9 ± 0.1 cm) in 100% potassium treatment after 8 weeks as shown in Table 3. Muller et al. [18] reported that potassium supply induced no significant difference among treatment in the leaf yield until 2 weeks but after 8 weeks highest yield obtained in 30% followed by 60% and 100%, and lowest yield in 0% treatment.

The macronutrient, magnesium (Mg2+) helps in balancing the negative ions, critical for enzymatic functioning and basic component of chlorophyll molecule. After 8 weeks, maximum shoot number (31 ± 1) and shoot length (3.83 ± 0.25 cm) in 1.5 mM (C) magnesium concentration followed by 1 mM and 2 mM magnesium treatment as shown in Table 5. Prasad et al. [6] stated that lowering magnesium was associated with lowering asiaticoside content but did not have significant effect on growth. The beneficial influence of Mg results in reduction of Mn uptake, and a higher concentration of Mg in plant tissues confer tolerance to high concentrations of Mn [29].

The micronutrient, manganese is required for respiratory and photosynthetic processes. Nutrients such as Fe, Ca and Mg in the growth medium can modify the uptake of Mn from media [30,31]. After 8 weeks, the maximum shoot number (43 ± 2) and shoot length (3.86 ± 0.15 cm) in 200 μM manganese followed by 300 μM and 100 μM (C) manganese treatments as shown in Table 6. Manganese did not show any significant effect on growth as reported by Prasad et al. [6].

From the investigation, it can be concluded that the nutrient composition of MS media has a strong impact on shoot multiplication of Centella asiatica . The different experimental treatments in MS media showed that maximum shoot proliferation was observed in MS media supplemented 100 mM (40 mM NH4NO3:60 mM KNO3) nitrogen source when NO3- concentration is higher than NH4+ ions, 3% sucrose as carbon content, 30% potassium, 150% phosphorous, 1.5 mM magnesium and 200 μM manganese respectively. The proper balance of these nutrients in the MS media contributes to proper growth and metabolism of shoot cultures. These findings may be useful to optimize the media for mass propagation of this potential medicinal plant, Centella asiatica both in terms of its biomass as well as for its secondary metabolites. Future perspective is to analyze the important centellosides present in Centella asiatica and to enhance it through biotechnological interventions.

Copyright: © 2018 Bharadvaja N, et al. This is an open-access article distributed under the terms of the Creative Commons Attribution License, which permits unrestricted use, distribution, and reproduction in any medium, provided the original author and source are credited.
Top