Incarcerated Wandering Spleen in a Congenital Hernia of the Cord: First Case Report 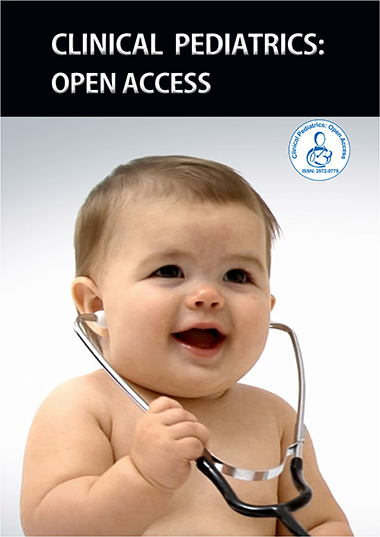 Incarcerated Wandering Spleen in a Congenital Hernia of the Cord: First Case Report

Congenital Hernia of the cord is an uncommon abdominal wall defect anatomically and embriologically considered as a different entity from Gastroschisis and Omphalocoele with an estimated incidence of 1:5000. Its content can be various including: small and large bowel, gallbladder, liver lobes and omphalo-mesenteric remnants. Here we report the first case of a wandering spleen incarcerated within the congenital hernia of the cord in order to highlight the importance of the surgical exploration to prevent solid organs injury. During the antenatal surgical counseling at 22 + 4 weeks of gestation, the exomphalos sac size was 30 × 20 × 20 mm. It had presumed bowel content but note was made of a cystic structure of uncertain etiology (possible bowel dilatation) at the base of the exomphalos, measuring 8 × 10 × 10 mm (Figure 2). The appearance of the stomach and intra-abdominal bowel was normal, other abnormalities included an apical muscular ventricular septal defect and micro-array detected duplication of 11q22.1 to 11q22.2 and 11q22.3 to 11q23.1. Maternal risk factors included: asthma, depression on sertraline treatment, fibromyalgia and medical use of marijuana for chronic pain, which was discontinued during pregnancy. The baby was spontaneously delivered in good condition, weighing 3.85 kilograms. He was self-ventilating in air and did not require resuscitation. He had no dysmorphic features or hypoglycemia suggestive of Beckwith- Weidman syndrome. The postnatal appearance of the abdominal wall defect was more consistent with a hernia of the umbilical cord rather than exomphalos minor. The umbilical cord was thickened with tortuous umbilical vessels and containing excessive Wharton’s jelly. Within the base of the cord, there was a more pronounced thickening with a visible purple discoloration that was thought to represent more tortuous vessels. On examination, there was pulsation on palpation of the base at the level of the defect. There was no obvious defect through which bowel could be appreciated.

The baby underwent surgery on day two of life: the umbilical cord was opened and the tortuous umbilical vessels were isolated and divided. Careful dissection demonstrated a solid organ at the base of the cord with a non-twisted vascular pedicle entering the peritoneal cavity. The appearance was consistent with a wandering spleen. The spleen was viable and measured 3 × 2 × 2 cm. The underlying fascial defect was only 1 cm demonstrating therefore congenital incarceration of the wandering spleen (Figure 3). A small right lateral fascial incision was made to enable safe reduction of the spleen into the abdominal cavity. Decision was made to only reduce the spleen into the abdominal cavity but not proceed to a splenopexy. The small fascial defect was closed under no tension and an umbilicoplasty was performed (Figure 4-6). The baby made a good postoperative recovery with no complications; he achieved full feeds by day 5 and was discharged home at day 7 postoperatively. The parents were counselled about the risk of splenic torsion, which would require emergency management and treatment. 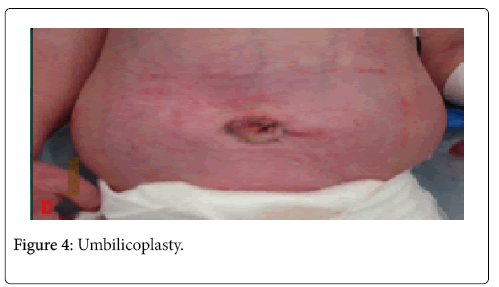 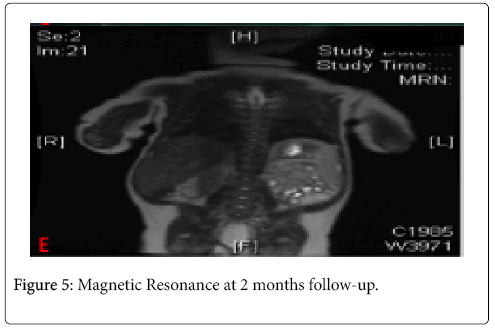 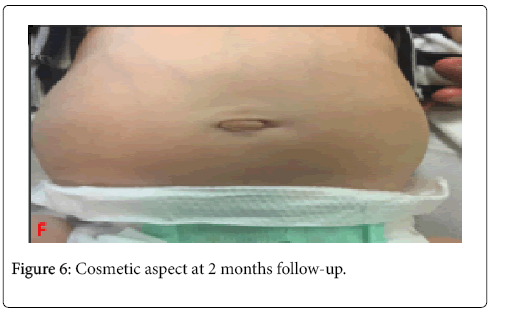 As an outpatient the baby underwent further imaging to be assessed for possible polysplenia. The MRI was performed with “feed and wrap” technique, showing the presence of a solitary spleen located within the left upper quadrant (Figure 6). The suspect of incarcerated wandering spleen in congenital hernia of the cord was thus confirmed.

The incidence of congenital hernias of the cord is not well established, but it is estimated to be 1 in 5000 live births with a male preponderance (3:1) and is more frequently seen in premature babies. During the first trimester, the midgut continues its development in the extra-coelomic environment within the umbilical cord. This will allow the concomitant growth of the other intra-abdominal organs, until the 10-12th weeks of gestation, when the rotation of the gut will be completed and the bowel will return back into the abdomen, acquiring its normal and definitive configuration. The umbilical ring will close and the extra-coelomic cavity will disappear leaving behind Wharton’s jelly and umbilical vessels in the cord. If the midgut fails to return into the abdominal cavity, a variable portion of intestine might remain within the extra-coelomic cavity presenting at birth as a congenital hernia of the umbilical cord. During antenatal scanning the distinction between a hernia of the cord and exomphalos minor can be difficult, as demonstrated by our case, and should include other differential diagnoses such as: cord hematoma, omphalo-mesenteric cyst, giant cord and teratoma. The clinical distinction can be made by appreciating that an umbilical cord hernia has a normal cord insertion with intact skin covering the umbilical ring at the level of the abdominal wall [1].

A congenital hernia of the cord can often be misdiagnosed as a bulky umbilical cord: it is important to know that small and largebowel, Meckel’s diverticulum, liver and gallbladder can represent the content of the hernia. Several reports have been published about iatrogenic injury of the herniated bowel caused by the too proximal application of the umbilical clamp [2]. The peculiarity of our case is represented by the content of the hernia itself. So far only one case of abdominal wall defect and herniation of the spleen has been described within the context of an exomphalos, but none as herniated organs within a congenital hernia of the cord [3].

The presence of the spleen as the content of the hernia indicates an unexpected mobility of this organ. The normal anatomy and position of the spleen within the left upper quadrant, is achieved by the presence of two fatty ligaments: the gastro-splenic ligament and the spleno-renal ligament between. When the splenic ligaments are maldeveloped or lax, this may cause the migration of the spleen in any part of the abdomen in relation to the length of its vascular pedicle. This condition is called wandering spleen, or ectopic spleen, and it is defined as the presence of the spleen outside of its normal location. The estimated incidence is less than 0.5% and it remains largely undetected unless there are secondary complications. One of the most common complications of a wandering spleen is the torsion of its pedicle undermining the venous return and causing hemorrhagic infarction leading to spontaneous rupture and death if diagnosed late. The intermittent torsion-detorsion can also produce episodes of acute on chronic abdominal pain related to transitory ischemic episodes [4,5].

The management of wandering spleen still remains controversial and challenging. There is no consensus on review of current published literature as to which approach is the best for the management of a wandering spleen. Options proposed include non-operative splenectomy or splenopexy and/or gastropexy either with open or minimally invasive approach. Disadvantages of a splenectomy would include: overwhelming post splenectomy immunodeficiency (OPSI), thrombocytopenia and multiple transfusion requirements. The review of recent published literature, on splenopexy for wandering spleen, showed a complication rate of 60% (mainly represented by spleen ischaemia) [6].

Unlike this series our case was a neonate and in the current published literature only one neonatal case of a wandering spleen has been reported. This was in the context of an exomphalos rather than a hernia of the cord. In this case the spleen was simply repositioned in its proper location without splenopexy. In our case we also opted not to proceed to a splenectomy or splenopexy. A splenopexy would have required a laparotomy for uncertain benefit with the risk of ischemia and loss of spleen at a vulnerable age for OPSI [7,8].

In our case we opted to explore the hernia of the cord operatively. Some surgeons perform bedside suture ligation of the cord and our case demonstrates the benefit of exploration. Careful inspection of the umbilical cord of every newborn at the time of delivery is essential. The current literature doesn’t report the association of the hernia of the umbilical cord and chromosomal anomaly; however our patient showed the duplication of 11q22.1 to 11q22.2 and 11q22.3 to 11q23.1. This chromosomal anomaly is known to be associated with a recognizable pattern of abnormalities such as mental retardation, intrauterine growth restriction, postnatal growth retardation, microcephaly, hypotonia, distinct facial dimorphism, atrial septal defect, ventricular septal defect, limb malformations, cryptorchidism, micropenis, inguinal hernia and psychomotor retardation [9].

To the best of our knowledge, this is the first described case of incarceration of a wandering spleen in a congenital hernia of the cord. As already advised in the current literature, we strongly recommend performing the surgical exploration of the umbilical cord hernia, in order to avoid injury of solid viscera and to rule out possible associated anomalies establishing the appropriate treatment.

The authors declare no conflicts of interest.

Copyright: Â© 2018 Iacona R, et al.This is an open-access article distributed under the terms of the Creative Commons Attribution License, which permits unrestricted use, distribution and reproduction in any medium, provided the original author and source are credited.