This paper describes an improvement of full-load performance of an internal combustion engine using Adaptive Valve Lift And Timing Mechanism (AVLT). AVLT enables engine power improvement by increasing valve timing and lift at high engine speed and load operating regions. It utilizes engine fluids pressure difference with respect to engine speed to actuate the AVLT mechanism which will make the valve lift higher and longer duration at higher engine speed and loads. Since engine speed and load can be linearly correlated to these pressures, a mechanical sliding arm valve actuation mechanism is constructed based on their transient behavior. Therefore, a continuously dynamic valve lift profile with respect to engine speed can be achieved to increase brake power of the engine. Dynamics analysis performed using MSC Adam software showed that tappet translation increased by 32% from 9.09 mm to 12.01 mm by varying translational skate position between 0o and 10o. The results from this simulation are then set as intake valve profile in Lotus Engineering software simulation. With AVLT, brake power at speed between 5000 and 6500 rpm increased between 2% to 7%. Maximum torque improvement was realized at 7000 rpm while BSFC was reduced by up to 2% at 7000 rpm. The increased in brake power and torque are direct results from volumetric efficiency linear improvement between 1.5 and 6% at speed range of 5000 to 7000 rpm.

Direct fuel injection has been used in internal combustion engines to improve volumetric efficiency of internal combustion engines which results in increased heating value of cylinder charge for specific power improvement. It also enables charge stratification and unthrottled operation which are favourable for improved thermal efficiency. Compressed natural gas spark ignition engine can significantly benefit from direct fuel injection due to the problem with displaced air in the intake manifold that reduces output power in port fuel injection system. Compressed Natural Gas Direct Injection (CNDGI) engine is fuel-efficient, environmentally friendly and offers low overall vehicle ownership cost [1]. By understanding the behaviour of CNGDI engine, changes can be made in order to improve thermal efficiency and performance including optimization of compression ratio, valve lifttiming profile, as well as design of exhaust and intake manifolds.

One of the major aspect in improving engine performance lies on the optimization of valve lift and timing of an intake valve [2]. The intake (as well as exhaust) valve profile determine the quantity and quality of air-fuel mixture in the combustion chamber, which affects the power produced. In spark ignition engines, intake valves close during the initial part of compression stroke and the spark plug ignites the air-fuel mixture at the end of the stroke, creating a force that eventually propels the car forward. Most engine have intake and exhaust valves at the top of the cylinder. Other engines, however, may put the valves on the sides. The valves can also be in a combination with one valve on the top of the cylinder and the other located on the side [3].

In internal combustion engines, Variable Valve Timing, often abbreviated to VVT, is a generic term for an automobile piston engine technology. VVT allows the lift, duration or timing of the intake or exhaust valves to be changed while the engine is in operation. The advantage of varying the valve lift and timing is useful either for slow driving or fast driving [4]. The mechanism of VVT varies from retarding, forwarding and even makes the valve lift higher and longer duration. Variable valve timing available at present are Variable Valve Timingintelligent (VVT-i), Variable Valve Timing and Lift Electronic Control (VTEC), Cam Profile Switching system (Campro CPS), Mitsubishi Innovative Valve-timing-and-lift Electronic Control (MIVEC) and Variable Nockenwellen Steuerung (Vanos). These systems adjust the cam profile with respect to speeds and load conditions either for power, emissions or thermal efficiency improvements.

Although there are many VVT mechanisms available in standard production cars, they mainly applied to petrol spark ignition engine and valve profile changes are actuated at a certain predetermined value. There are some challenges to overcome including power drop at high speed operations caused by multiple factors including decreasing volumetric efficiency. This challenge can be more serious with gaseous fuel. This paper explains a development of an adaptive variable valve and timing mechanism for a CNGDI engine and the performance improvements at high speed and load operations. AVLT mechanism is designed with the aim to maintain engine volumetric efficiency at high speed and high load by making the valve lift higher and longer at those conditions.

Analysis of adaptive valve lift and timing were made to determine the improvement of high end performance using Adaptive Valve Lift and Timing (AVLT). It includes mechanism modeling, dimension analysis and engine simulation test with chosen engine specifications. The mechanism was designed so that it can possibly be mounted on the engine head and improves valve lift and duration upon actuation. The valve lift, duration and timing were varied to determine the improvement of using AVLT.

A 1.6-liter Proton Campro engine with dual overhead camshaft (DOHC), multiport fuel injection (MPI) was used in this work. This engine is design for gasoline operation and later converted to CNG operation in this study. The specifications of the engine, intake valve and exhaust valve are listed in Tables 1-3.

The VVT system that is presented in this paper is a pressure differential Adaptive Valve Lift and Timing (AVLT) mechanism. With some modification on cylinder head, this mechanism is integrated with the existing cam system with some retrofitting. As seen in (Figure 1), it is a push-rod/rocker type mechanism that able to adjust the intake valve lift consisting oscillating follower and a translational skate [7,8]. The position of translational skate is adjusted by a control lever and a connecting rod so that every valve lift can be achieved continuously between minimum and maximum value during operation. The position of the control lever is given by a hydraulic cylinder that is controlled in respond with lubricant oil pressure. The oil pressure needed to set the hydraulic cylinders piston displacement, thus the intake valve lift is controlled. Since the lubrication oil and cooling water pressure increases linearly with engine speed, output from lubricant oil pressure can be used to set the skater’s position where low engine speed will place the skater at the minimum valve lift position illustrated in Figure 2, and continuously adjusts the skater position towards maximum valve lift position to make the valve lift higher and longer duration. 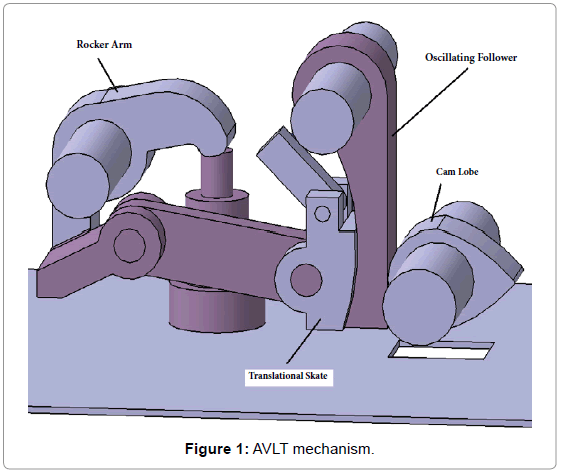 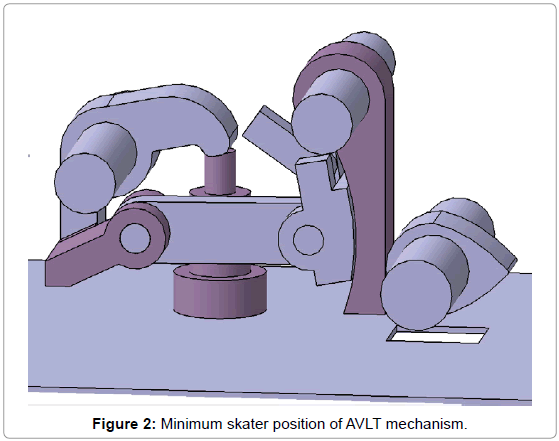 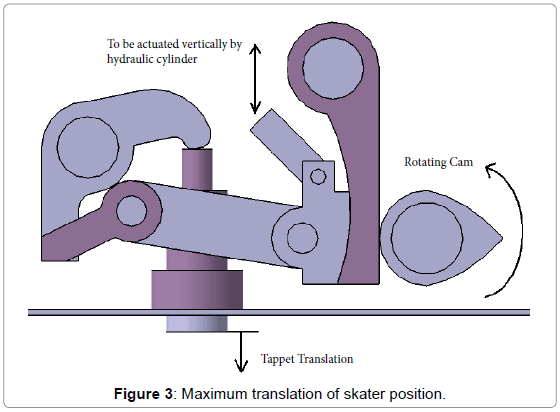 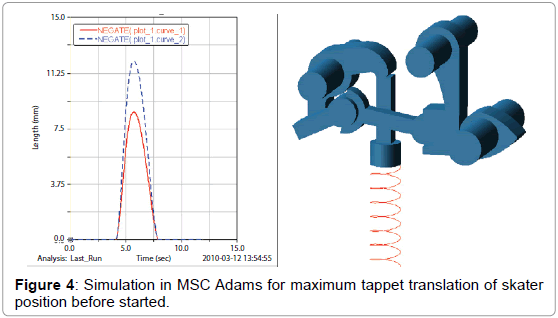 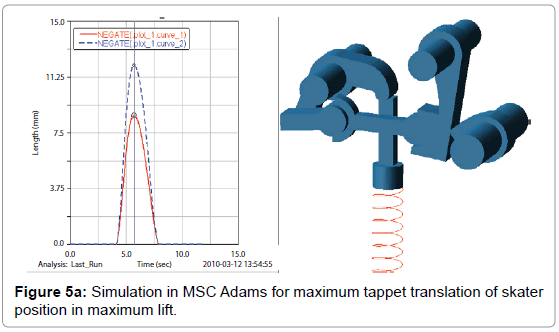 Figure 5a: Simulation in MSC Adams for maximum tappet translation of skater position in maximum lift. 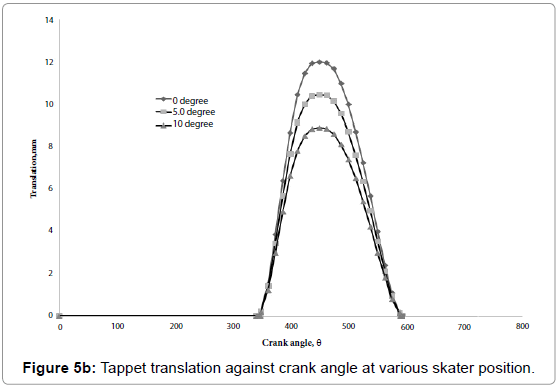 In order to determine the effect of AVLT to the engine performance, engine test simulation was done by using Lotus Engineering Software. With this software, engine parameters can be input to the engine map in various conditions. By using the results from dimension analysis, valve lift and duration data were inserted to the valve specifications thus the performance result on power, torque, mean effective pressure, specific fuel consumption and volumetric efficiency can be acquired. Figure 6 shows the engine map constructed in Lotus Engineering Software with Campro 1.6 engine specifications [9,10]. 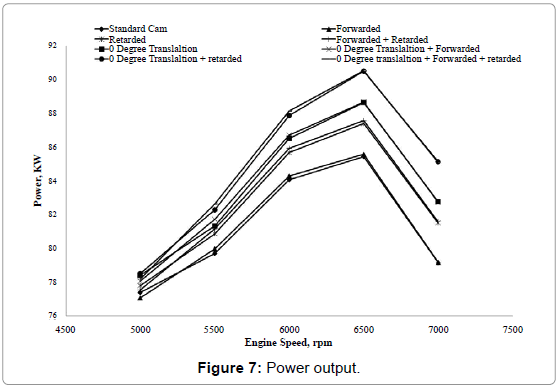 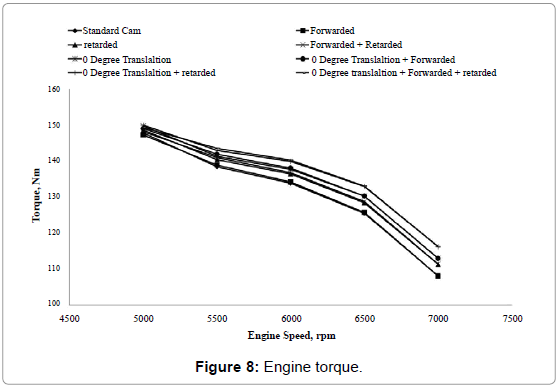 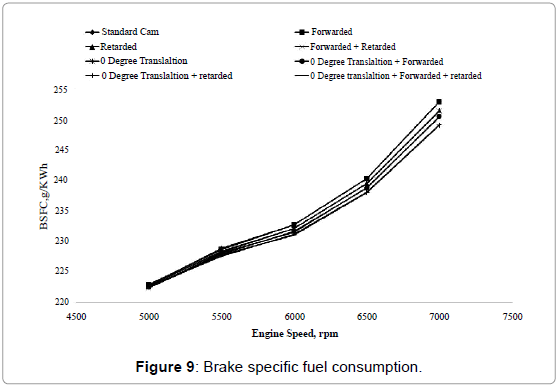 In terms of BSFC, by making valve lift higher, forwarding and retarding the valve lift duration lowers BSFC of the engine. The data plot behavior is the same either in minimum lift or maximum lift of AVLT where maximum lift of AVLT gives much lower BSFC. The combination of forwarded and retarded valve lift duration gives the lowest BSFC and forwarded lift gives the highest BSFC. This behavior is similar to torque and power where the retarded lift having a close value with the combination of forwarded and retarded. 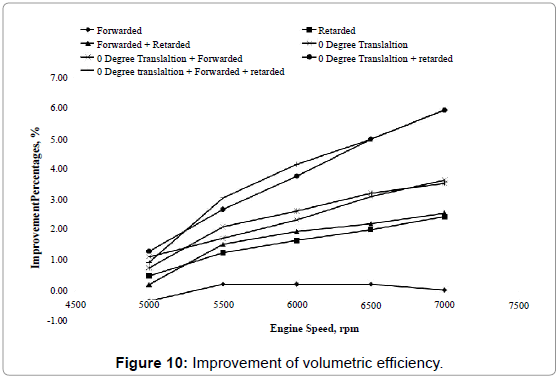 This study has demonstrated that using AVLT mechanism in an engine has a potential to improve high end performance with respect to fuel efficiency, volumetric efficiency and output power. Dynamics analysis performed using MSC Adam software showed that tappet translation increased by 32% from 9.09 mm to 12.01 mm by varying translational skate position between 0° and 10°. The Lotus Engineering software simulation showed that brake power at speed between 5000 and 6500 rpm increased between 2 to 7%. Maximum torque improvement was realized at 7000 rpm while BSFC was reduced by up to 2% at 7000 rpm. The increased in brake power and torque are direct results from volumetric efficiency linear improvement between 1.5 and 6% at speed range of 5000 to 7000 rpm. AVLT mechanism design is flexible where oscillating follower can be shaped so that it can fulfill the desired valve lift and duration which can be applied to any internal combustion engine. The combination of forwarded and retarded in maximum translation of AVLT improves high end performance the most.

This project was funded by Ministry of Higher Education Malaysia and Universiti Kebangsaan Malaysia under project code UKM-GUP-BTT-07-25-157.

Copyright: © 2016 Mohamad TI, et al. This is an open-access article distributed under the terms of the Creative Commons Attribution License, which permits unrestricted use, distribution, and reproduction in any medium, provided the original author and source are credited.
Top