Identification of the Optimum Temperature of Myrmeleon obscurus (Rambur, 1842) Identification of the Optimum Temperature of Myrmeleon obscurus (Rambur, 1842)

Terrestrial ectotherms are active between precise thermal tolerance values, from lower to upper limits that impacts their survival. Arround the temperature range where the xerophilous antlion larvae are active, there is a temperature close to the upper thermal limit where vital functions are optimal. No research at our knowledge is done on the thermal tolerance of Myrmeleon obscurus (Rambur, 1842), the present investigation identifies the thermal optimum of each larval stage in a range of four temperatures: 22, 27, 35 and 40°C. It comes clear that 35°C is the temperature at which no mortality is observed resulting to 100% of adults all viable; at this temperature M. obscurus has the shortest life cycle 45.43 days.

Insects are ectothermic organisms and therefore have a very weak capacity to regulate their body temperature, so that the ambient one determines all the biological activities. Low temperature variation can alter the metabolic activity of organisms [1], resulting in significant changes in their development, survival, reproduction, and behavior [2-5]. A change in ambient temperature produces to the insect a proportional increase or decrease in all its metabolic processes [6].

Temperature is an essential resource for the development of insects, while adequate; it impacts positively its whole development and life. Variation in the amplitude of the thermal tolerance is specific and depends to the developmental stage and to the environmental conditions of insects [7]. Increasing the temperature to the thermal optimal level causes acceleration of the insect metabolism. Hence, it directly influences increase of their activity [8].

However, the optimal temperature is therefore considered as that of most efficient physiological insect functions. At the optimal temperature, le duration of development is shorter, live expand is longer, feeding and growing are at their maximum values [9]. For terrestrial insects, the thermal optimum is higher and most close to the upper thermal limit. In addition to temperature, other spatial and temporal changes in the environment, such as the availability of nutrients can influence growth and survival [10].

Antlions are xerophilic insects that the duration of developmental stages (larval, pupal and adult) depends on several factors such as photoperiod, temperature, prey availability and body size [11] and this developmental process can be accelerated or retarded. Some species of antlion larvae do construct pits in areas with high soil temperatures [12,13].

However building and cleaning of pit trap by larvae increases better under suitable temperatures [14,16] although some other studies have been done on the effect of temperature on activities of antlions larvae. [14-20]. But few works are focused on the influence of temperature on the development and even the understanding of the functioning of antlions and temperature on larval activity in their habitats generally dry and arid zones [21].

Works on the characterization of the M. obscurus habitats which is one of the most common species in the northern part of Cameroon [21-23] shown that larvae are encountered in shaded habitats under trees, protected from the direct sun light. Previous investigations situate their thermal tolerance limits within range of temperatures from 10°C to 42°C [21,24]. It is also in this range that is found the suitable temperature under which M. obscurus builds and cleans its funnels [25]. The present investigation makes a step forwards finding out the thermal optimum of M. obscurus at each stage of its development.

Myrmeleon obscurus larvae were obtained by extraction from their funnels at the sites of their occurrence. Sampling was carrying out at the beginning of dry season in high Guinean savannahs of Adamawa in Cameroon. The larvae of the same batch were collected the same day and reared. A total of 87 larvae have been extracted and brought to the laboratory. Among them, 67 whose length was equal to 1.5 mm were considered stage I larvae and considered for the manipulation. Consideration of size (1.5 mm) as a stage 1 larva is based on our observations of laboratory hatched.

The larvae are introduced individually in cups of 33 cl filled to two-thirds of the marine sand sifted with a 500microns of mesh sieve. The larvae are fed ad libitum, receiving each per day, one third instar larva of Tribolium castaneum (Coleoptera: Tenebrionidae). Four sets of 16 larvae were constituted and put in rearing in cages at fixed temperature. One rearing cage was monitoring at 22°C, a second one at 27°C a third one at 35°C and the last one at 40°C.

Daily follow-up of rearing of larvae and cocoons

Activities of larvae as feeding, cleaning of funnels, molting were observed and noted on daily basis. After molting or formation of the silk cocoon, the sand was changed, and the newly emerged larva measured (length x width), the length was measured from the abdomen to the mandibles and the width at the thorax, and put in clear sand. If a cocoon is formed, its diameter is noted, and observations continue in the same cup.

When adults emerge from cocoons, their appearance and viability are noted (Table 1 and Table 2). Data on development time and size of different larval stages and cocoons were analyzed by one-way ANOVA. In the post test a Duncan procedure was proceeding to access the less significant difference among means observed.

Table 1: Influence of temperature of breeding on the total duration of the development of Myrmeleon obscurus in condition of food ad libitum with a larvae of Tribolium castaneum per day (mean ± SE n=16). Within a line, values followed by the same letter are not significantly different (p≤0.001) (n=16 larvae per treatment).

Table 2: Influence of the variation of the temperature on the size (Length x width in mm2) Myrmeleon obscurus larvae (n=16). In the line; value followed by the same letter are not different significantly (p≤0.01).

Influence of temperature on the development of each larval stage time Figure 1. Influence of the temperature of rearing on the duration of the development of Myrmeleon obscurus fed ad libitum with third instar larvae of Tribolium castaneum

The Silk cocoon that protects against thermal variations can also be affected by changes in temperature; because the duration of the cocoons in different temperature conditions are not the same. However, the shorter duration is 35°C (17.85 days) and in other conditions seems to have no difference.

Larvae that at the first stage had the same length, 1.5 mm, reared at different temperatures, as soon as they pass the second instar larvae show a great variation in their size.

Influence of the temperature on the mortality of larvae 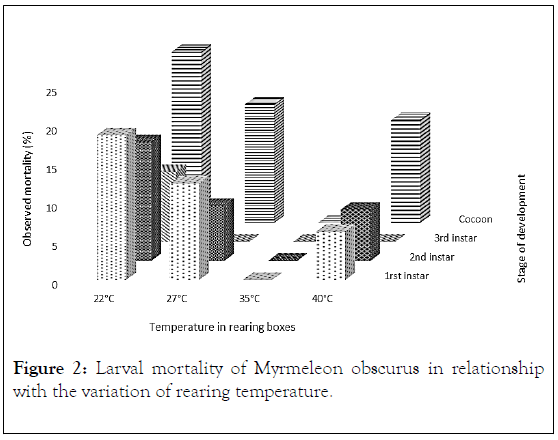 Figure 2. Larval mortality of Myrmeleon obscurus in relationship with the variation of rearing temperature.

Effect of temperature on the construction, maintenance of pitfall traps and predation

Construction, cleaning of the pitfall traps and predation are the main parameters through whose antlion larvae exhibit their vitality. The temperature has an important impact on these activities.

At 35°C a maximum activity of larvae is carry out, 80% of pitfall traps are regularly cleaned up at the first instar larva. At the second and third instar, 100% of pitfalls are cleaned the predation rate is also maximal.

At lowest temperature, 22°C for example, larval activities are reduced only 22.22% of pit fall are cleaned at the first instar larva, in stage 75% at the second and 83.33% at the third one. The predation rate is also reduced (Figure 3). Figure 3. Influence of temperature on cleaning of pit fall traps (a) and the efficiency of the predation (b) in larvae of Myrmeleon obscurus. 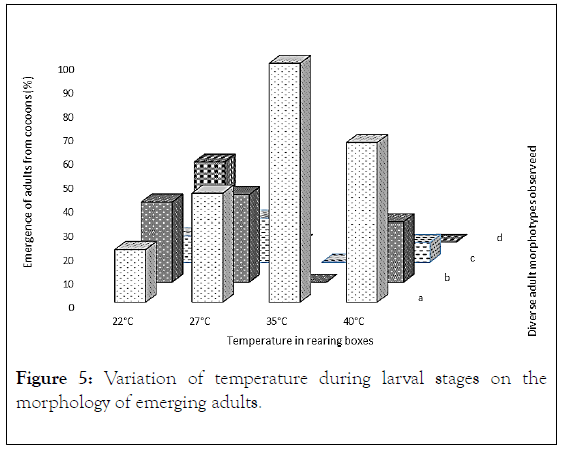 Figure 5. Variation of temperature during larval stages on the morphology of emerging adults.

Our study shows that from the optimal temperature, emergence of poorly formed adults with wrinkled wings that does not allow them the flight or to still live increases. Moreover, larval mortality that increases in the same way. Investigations on other insects [30] shown that far from the favorable thermal zone, mortality increases, death occurs at early stages. In general, most imago’s emerging at sublethal temperatures is not viable. In the sub-lethal and lethal temperature zone, pre-pupae die without being able to reach the nymphal stage or, if they succeed, the few adults trained fail in living. Concerning our investigations, antlions in unfavorable temperatures do not feed normally but rather seek to relocate their funnels [31] observed that adult antlions have a short life span and some do not even feed, only mate and die. Thus, to complete its life cycle they depend crucially on the body mass of larvae before pupation.

Temperature during the larval stage is responsible for some characteristics of the adults.

Our study showed that body size of larvae is highly correlated with temperature this fund in previous experiments on Arthropods. The larvae have a larger size when the temperatures are more favorable. In eastern North America, larval and adult body size of the ant lion Myrmeleon immaculatus (DeGeer) increases weakly with latitude [32].

The predation and the maintenance of pit fall traps, show that temperatures below or above the thermal optimum (35°C), have negative impact. The soil temperature to positively affect pitfall trap volume and maintenance found in Myrmeleon pictifrons [14]), Myrmeleon immaculatus [15] and E. nostras [16]. However, other studies showed contrasting effects of temperature on trap building. For example, in another study on M. immaculatus, the trap building frequency was negatively correlated with temperature [18]. It is likely that studies demonstrating a positive effect of temperature on trap building focused on a lower range of temperatures than studies demonstrating a negative effect. Furthermore, given that optimal body temperatures might differ between species that prefer shaded areas and species that are unresponsive to shade [19]. The same thermal range could result in contrasting thermal responses between such species. Some evidence supports this view. For example, it is shown that the intensity of hunting behaviors in M. immaculatus larvae (mandible extensions, body movements or direct prey capture attempts) increased with temperature to some point, but decreased with further increases in temperature [33]. Antlion larvae of the same species increased their trap-building frequency at lower temperatures [16], thermal range (38-47°C) may be above the thermal tolerance limit of this species [33]. On field conditions, it appears that larval density of larvae under the trees is higher than in March and April where the temperature is about 32°C [24].

Temperatures under which larvae are reared have real impact on the issue and the viability of the emerging adults. Within the interval of thermal tolerance of M. obscurus, the temperature 35°C causes optimal development rate leading to normal and viable adults.

Copyright: © 2019 Bakoidi A, et al. This is an open-access article distributed under the terms of the Creative Commons Attribution License, which permits unrestricted use, distribution, and reproduction in any medium, provided the original author and source are credited.