Prosthetic valve endocarditis (PVE) is a frequent complication of valve replacement surgery, accounting for 9.5-15% of all endocarditis cases. Fungi cause a small proportion of PVE and contribute to 4-6% of all etiology. Fungal PVE in drug addicts is a rare, but challenging and disastrous disease. We describe the case of a 49-year old patient with intravenous heroin abuse, Hepatitis C and HIV infection, suffering from extreme fungal aortic PVE caused by Candida parapsilosis five month after valve replacement due to endocarditis caused by Enterococcus faecalis. Predisposed patients under immunosuppression might benefit from aggressive endocarditis prophylaxis to avoid PVE.

A 49 year old male patient with a long history of i.v. drug abuse, although under continuous target detoxification support (medical Methadon assistance) but still addicted to i.v. drugs, positive for Hepatitis C (high viral load) and HIV was first operated on in November 2014 due to aortic valve endocarditis caused by Enterococcus faecalis.

He received a biological valve prosthesis. Five months later he was readmitted to our department in a devastating condition with all clinical (sepsis, multiple emboli) and echocardiographic signs of PVE with a huge vegetation extending into the ascending aorta, and abscess cavities at the non-coronary and right-coronary sinus of the aortic root (Figure 1a and 1b). Figure 1(a and b): Transoesophageal echocardiograms: huge vegetations on top of the biological prosthesis (stars), prolapsing into the ascending aorta (a, long axis), abscess cavity (b, short axis). 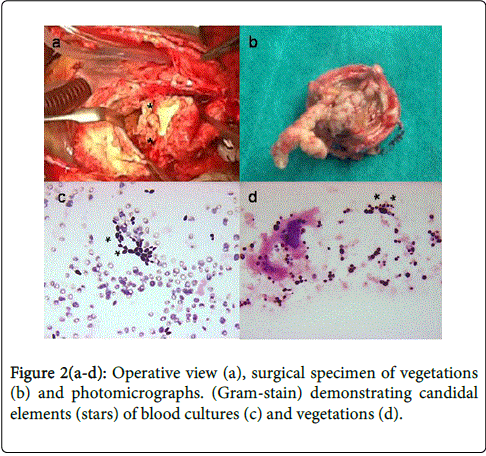 The portal of entry was not identifiable confidently. Reoperation was performed, infective valve (Figure 2a and 2b) was removed and, after radical surgical debridement of all infected tissue, abscess cavity was closed with pericardial patch and valve re-replacement was performed using a biological valve.

The histopathologic photomicrograph of the vegetation demonstrated innumerable candidal elements (Figure 2d). The postoperative course was uneventful, the patient was discharged on the 10th postoperative day to cardiologists department and transferred at 12th postoperative day to a special drug rehabilitation, to guarantee appropriate support for detoxification and psychological care. Perioperative amphotericin B therapy and lifelong use of oral antifungal agents for suppression was recommended to prevent recurrent endocarditis.

Infective endocarditis (IE) is a life-threatening disease, associated with an enormous risk of morbidity and mortality. The predominant etiologic agents are bacteria followed by fungi.

Fungal endocarditis (FE) is an uncommon occurrence and the most severe form of IE. The first case of FE after a mitral valve replacement was reported in 1964 [1], but other authors described such cases in recent years, indicating the importance of these infections [2,3]. Frequency of FE accounts about 1.3% to 6% of all IE cases [3], but an increase in cases of fungemia/FE has been seen during the last 2 decades. Candida parapsilosis is the second most common species after Candida albicans. Men are exposed to a higher risk of infections than women [3], as well as younger patients during third or fourth decades of life are. Candida parapsilosis in general shows low virulence and is presumed to be an opportunistic organism. Manifestation of such nosocomial infections prevalently occur in immune-deficient patients with prosthetic valves or other foreign material. The likelihood of FE affecting a prosthetic valve is higher than for native valves, in particular in patients underlying suppression of cell-mediated immunity, such as our patient, who suffered from infective Hepatitis C/HIV and who was addicted to drugs. Boland et al. [3] recently reported the largest series of 21 patients suffering from fungal PVE. Twelve of 21 cases (57%) occurred within one year after valve replacment and the aortic valve most commonly was affected [4].

Even 95% of these patients were immune-competent, morbitity was 67% for complications and infection related mortality was 57%. 36% of these cohort developed recurrent fungal prosthetic valve endocarditis (FPVE) at an average of 25.8 months after their first operation for FE. Candida parapsilosis shows a tendency to create a biofilm which is difficult to treat and which might cause, beyond systemic alterations, serious infections of the central nervous system. Garzoni et al. [5] identified prosthetic valves (57.4%) and intravenous drug use (20%) as evident predictors for C. parapsilosis endocarditis in a large review consisting of 72 patients. Mortality in this overview was 41.7%. As high relapses are common, early diagnosis, immediate appropriate antifungal therapy and combined surgical treatment, in particular in immune-deficient patients, are crucial for the survival of such challenging patients.

Copyright: © 2015 Gansera L, et al. This is an open-access article distributed under the terms of the Creative Commons Attribution License, which permits unrestricted use, distribution, and reproduction in any medium, provided the original author and source are credited.