Objective: To evaluate differences in the follow-up of recurrent unintended pregnancy (UP) between a former and a posterior episode.

Methods: Retrospective study of women with recurrent UP comparing contraception and methods of abortion between the first and second episode.

Results: Ninety-one women fulfilled the study criteria. The prevalence of UP was 13.7%. The mean time between abortions was 21 months (2-57). Before the first episode, most women were not using any contraceptive method (39.3%), while before the second episode most were using oral contraception (OC) (48.8%). In both groups, OC was the most frequent method chosen after the abortion, with a higher prevalence after the first episode (82.1% vs 42.1%) (p=0.001); the number of subcutaneous implants inserted was higher after the second abortion (10.2% vs 39.6%) as well as intrauterine devices (1.4% vs 9.8%) (p=0.001). While after the first abortion no women chose sterilization, after the second eight women had their tube ligated (p=0.039). In both episodes most women started a new contraceptive method after the abortion (77%; 75%). In the first UP only 9.1% (n=26) of the abortions were surgical while in the second episode, surgical abortions had a higher prevalence (n=99; 34.7%) (p=0.001).

Conclusions: Past history of abortion changes the clinical management of UP in what concerns abortion methods and contraceptive choice.

Unintended pregnancy (UP) can be defined as any pregnancy that is mistimed or unwanted at the time of conception [1].

Recurrent UP is often perceived as being different from single UP. In Portugal, during the years 2012 and 2013, the incidence of repeated abortion was 26%, [2] whereas in countries where abortion is legal for a longer period this incidence reaches 34%, in England/Wales, [3] or even 48%, in the USA [4].

According to CDC data, the number of repeated procedures for pregnancy termination shows a rapid rise after abortion legalization followed by a slower rate of increase, remaining almost constant thereafter [5].

It is estimated that sexually active women who are not using any kind of contraceptive method will need 30 abortions during their lifetime due to UP. Even in populations with a high level of contraceptive coverage, UP will always occur [6].

To decrease the number of repeated abortions, we must start by reducing UP. Several studies focusing on this issue agree that women who had repeated abortions are older, have more children, and are more often non-white. The use of a contraceptive method at the time of conception is more common in women with previous UP than in women having their first abortion [4,7,8].

Although recurrent episodes may alter clinical management of an UP, there are few studies focussing on how contraception and methods of abortion change in recurrences. The objective of this study is to evaluate differences in the management of recurrent UP compared to first episodes, particularly in what concerns contraception. Moreover, by doing a direct comparison between the first and the second episode, we will evaluate behaviour changes towards UP and contraception.

We did a retrospective study of recurrent unintended pregnancies followed from January 2012 to December 2013 in Dr. Alfredo da Costa Maternity in Lisbon, the major public institution in the follow-up of UP in Portugal. Women with more than two abortions and those whose first episode was not followed in our maternity were excluded.

Demographic information was collected from administrative data and the remaining variables from the clinical file.

In the appointment of UP of our institution each pregnancy is dated using crown-lump distance and advice regarding family planning and possible methods of abortions are given. Women, together with their doctor, decide the best contraceptive method to start after the abortion and the most appropriated method of abortion to use. After three days of reflection the abortive procedure is started.

Surgical abortions and medical abortions after 9 weeks of gestation are done in an inpatient way. Aspiration under general anaesthesia is the preferred method for surgical abortion with ultrasound control during the procedure. When appropriate long-lasting contraceptive methods are inserted. Women are discharged in the same day.

In medical abortions before 9 weeks of gestation women take a pill of mifepristone and 48 hours later start the protocol of misoprostol at home. Oral contraception should be started in the same day. A follow up appointment is scheduled in a 4 week interval were a pelvic ultrasound is done to confirm a complete abortion and long-lasting contraception is started if desired.

Statistical analysis was made using the SPSS 17.0® software. The χ2 test and the McNemar test were used were appropriate. Probability below 0.05 was considered significant.

Throughout the period referred above, 3150 women were followed for unintended pregnancy, among which 432 had a recurrent episode (incidence 13.7%). After applying the exclusion criteria, we obtained a total of 285 women (Figure 1). 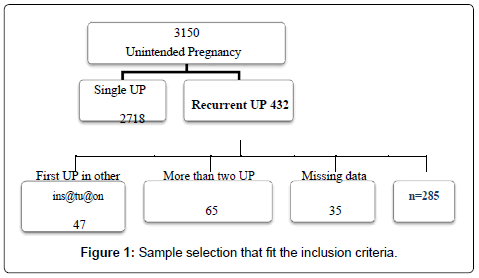 Two hundred and seven out of the 285 women involved in this study were Portuguese. Sixty nine percent were single; 36% had completed secondary school, and only 9% had a college degree; 39% worked in agriculture/industry and 24% were unemployed (Table 1).

Table 2 shows the results concerning pregnancy-related variables in the first and in the second unintended pregnancy.

The mean time between the two episodes was 21 months. Eightysix (30%) of the recurrences occurred both in the first and the second year after the first episode and the number progressively decreased through the years (Figure 2). 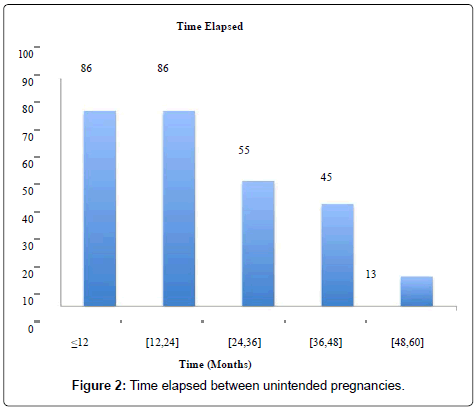 Before abortion: Before the first abortion most women were not using any contraceptive method when they became pregnant (112; 39.3%); 108 (37.9%) were using oral contraceptive pills and 57 (20%) relied on barrier methods to avoid pregnancy. Only a minority used natural methods (0.7%).

Before the second abortion the majority was using the contraceptive pill (139; 48.8%). The number of women using no contraception had a small decrease to 36.5% and to 11.6% when we consider the use of barrier methods. No woman was using natural methods.

When we compared both episodes we obtained a statistically significant difference in the use of oral contraception (p=0.003) and barrier methods (p=0.006) (Table 3).

After abortion: After the first abortion the contraceptive pill was the preferred method (234; 82.1%), followed by subcutaneous implant (29; 10.2%). Other contraceptives were rarely chosen (Table 4).

Although oral contraception remained the most common choice after the second abortion (120; 42.1%), there was a significant increase in long lasting contraception, such as the subcutaneous implant (113; 39.6%) and the intrauterine device (IUD) (28; 9.8%). Eight women decided for surgical sterilization (2.8%).

Comparing the method used before and after the abortion we noticed that in the first episode 262 women changed their contraception after an UP (92%) and only 23 (8%) kept the same method. In the second episode the results were statistically different: 224 (78.6%) changed their contraceptive method and 61 (21.4%) maintained the method previously used (p=0.001) (Table 5).

In the first episode 259 (90.9%) abortions were medical and the remaining 26 (9.1%) were surgical. Although medical abortion remained the most frequent method of abortion in the second episode (65.3%), surgical abortion had a statistically significant increase (34.7%) (p=0.001).

According to the Portuguese law women can voluntary interrupt their pregnancy until the 10th week of gestation. Voluntary abortion should not be understood as a family planning method.

Recurrent UP are particularly frequent in high risk populations [4]. To avoid further episodes, clinical management may differ according to the number of previous abortions. Similarly, women’s behaviour towards contraception, unintended pregnancy, and abortion may also vary.

In our study the final incidence of recurrent unintended pregnancy was 13.7%, which is quite below the national value of 26% [2]. This lower incidence is due to our exclusion criteria. First of all, only second-degree abortions were included, which mean that higher degree abortions, that may be responsible for 39.6% of recurrent abortions [4], were not considered. Moreover, since we have only considered women followed in our institution we were limited to abortions that occurred in a five-year interval. Another possible explanation is the fact that the women’s mean age ranged from 26 in the first episode to 28 in the second, while recurrent UP becomes more frequent after the age of 30 [2].

Our results confirm that recurrent UP is particularly frequent among single, low-income, women with lower educational status. Indeed, most of the recurrences occur in the first two years after the previous episode [2].

It is also clear, particularly in the second episode, that the majority of the women use some kind of contraception. Hence, most of UP recurrences result from inconsistent or incorrect use of contraceptives [8]. Our results also support the idea that women are trying to avoid recurrent UP. Firstly the number of women using contraception is higher in the second episode and the majority is taking hormonal contraception before the second UP. So, women undergoing their second abortion are more likely to become pregnant while using a hormonal method than first-time patients. Indeed the use of lowefficacy methods before the second abortion, such as barrier or natural methods, is lower comparing with the first abortion. Secondly, after a recurrence the number of women choosing a long-lasting, highly efficient method, is statistically higher. Madden et al. reached the same conclusion in their study [9]. Finally the UP episode works like a trigger to contraception change, which suggests that women are receptive to learn and to improve their behaviour. So, despite the initial concern that women, particularly those with recurrent episodes, rely on abortion as a primary contraceptive method [10], most studies, including the present one, support the idea that women are trying to avoid UP but are having problems doing so. Health care services must improve their follow-up strategies [6], which should include a structured programme in order to monitor the effectiveness of the contraceptive regime initiated after the first abortion [11]. These strategies should be posteriorly monitored.

Surgical abortion was far more frequent after the second abortion. This is due to a highly judicious medical choice to guarantee an immediate start of long-lasting, highly effective contraception, which are prone to prevent repeat abbotion [12].

Although some conclusions from this study should be regarded with caution, due to the size of the sample, most of the differences observed are large enough to support their significance. A larger sample would strength our results. Despite the relevance for our medical and social reality, the five-year history of our appointment limited the size of our sample.

We finally note that the present study is the first one where each woman is compared to herself. Therefore, it accurately reflects behaviour changes towards contraception and unintended pregnancy. It is an essential step to understand recurrent unintended pregnancy, improve follow-up, and avoid further episodes.

Clinically, first and second unintended pregnancies are two distinct situations that have a different physical, psychological, and social impact in women’s health. Physicians tend to have a more cautious approach towards recurrent episodes and women are more receptive to behaviour changes. Together, these two synergic attitudes will help reducing recurrent unintended pregnancies.

Copyright: © 2015 Andrade AG, et al. This is an open-access article distributed under the terms of the Creative Commons Attribution License, which permits unrestricted use, distribution, and reproduction in any medium, provided the original author and source are credited.