Lake Qarun suffers from several environmental problems. It receives agricultural and sewage drainage water from Fayoum Province. Variations in the levels of five heavy metals (Fe, Cu, Mn, Zn and Pb) seasonally estimated in water collected from different areas of Qarun lake during (August 2014 to May 2015). Results of the current paper indicated that the high heavy metals levels were recorded at Al-Batts drain (B1) and Al wady (w1) seasonally, where The distribution patterns of heavy metals at Al-batts drain (B1) followed an abundance of: Fe>Zn>Mn>Pb>Cu seasonally accept autumn and Fe> Mn>Zn>Cu>pb at Al-Wadi Drain (W1), seasonally. Also, the results revealed that Al-Batts drain contained more heavy metals concentrations than Al Wady drain. On the other hand, the results illustrated that Pb and Cu were the lowest levels, but Fe showed the maximum levels in water of the Lake.

Pollution of water is known as an introduction by man, directly or indirectly, of materials or energy into the aquatic area resulting in harmful impacts such as reduction of climate amenities, hazards to human health, impairment of water quality and hindrance of fish functions. An input from human activities causes an increase of a substance in fresh or seawater, sediments and organisms above the natural background level for that area and for those organisms [1].

Heavy metals are present in the environment in different phases such as in solid phase and in solution, as free ions, or absorbed to solid colloidal particles. The trace metal levels in the environment are due to natural sources (soil erosion, dissolution of water soluble salts, rock weathering) as well as anthropogenic source such as municipal wastewater, agricultural activities and manufacturing industries [2].

Trace metals are known as those metals and metalloids generally considered to be of sufficient distribution and abundance to be in some way environmentally or biologically significant as a toxic material. Also, the term heavy metal refers to any metallic chemical substance that has a relatively high density and is harmful or poisonous at low levels. The harmful effects of metals on aquatic ecosystem necessitate the continuous measuring of their accumulation in key species because it affords an indication of the temporal and spatial extent of the process and effect on organism’s health. Heavy metals consist of essential and non-essential elements have a particular significance in ecotoxicology because they are highly persistent and all have the potential to be toxic to living organisms [3].

Recent years have witnessed significant attention being paid to the problems of environmental contamination by a wide variety of chemical pollutants, including the trace metals [4,5]. Metals are of particular concern, among environmental pollutants, because of their ability to bioaccumulate in aquatic ecosystems and potential toxic effect [6]. So the present study aimed to determine heavy metals concentrations in Qarun lake seasonally to prevent pollution of the lake and protection of aquatic organisms.

Samples of water were taken in four seasons from August 2014 to May 2015 by Ruttner Water Sampler from four sites (Al-Wady drain, Al-Batts drain, khor Alhitan pump station and main pump station) of Qarun lake by taking three points from each site (Figure 1). Water samples for heavy metals were collected and kept in clean plastic bottle of 1 Liter capacity, and preserved with 5 mL concentrated nitric acid on the spots and will be stored in refrigerator until analysis. 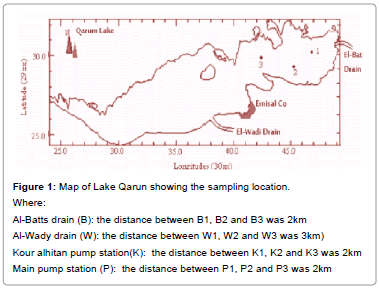 Water samples of 1 liter were taken from the different sites in poly ethylene bottles seasonally. Before collection, the bottles were previously rinsed many times with water of the lake. The entire sample was acidified by 5 mL of concentrated HNO3 at collection site. In the laboratory, (20 mL of HNO3+500 mL of water sample) were added in a beaker and boiled on a hot plate until complete digestion, nearly 15-20 ml before precipitation occurs. The remaining volume was completed to 100 ml with deionized distilled water. A portion of this solution was taken for the estimation of trace metals. The metals concentration (Mn, Fe, Zn, Pb, and Cu) were estimated using GBC atomic absorption spectrophotometer Savanta AA according to the method [8]. The results are expressed in (μg/l).

Table 5 indicated seasonal variation of Pb concentration in samples of water from different areas of Qarun lake. The results revealed that the higher mean level of Pb concentration was (7.35 ± 2.92μg/l) found in autumn season at Al-Batts drain and minimum mean value was (0.72 ± 0.72 μg/l) found in winter at Al wady drain. Pb was not detected (ND) in winter season at (WI and WIII) Al-Wady drain and (KIII) Khor Alhitan pump station under the instrument detection limit (0.1-20 mg/l).

In the current study, heavy metals levels (Fe, Zn, Mn, Cu and Pb) in Lake Qarun water raised in hot seasons (spring and summer) and decreased in cold seasons (winter and autumn). This elevation of heavy metal levels in hot seasons may be related to the release of metals from sediments to the overlying water under the effect of both high temperature and decomposition of organic matter that cause fermentation process [9]. Also, the decreased values in cold seasons may be due to precipitation of trace metals from water column to the sediments at slightly high pH levels and the adsorption of metals onto organic substance and their settlement downward [10]. It appears that variations in the levels of heavy metals in the lake in the four season are strongly dependent on both the drainage water discharged from the various drains in the lake as well as the velocity and direction of winds [11].

Results of the present study revealed that the high concentrations of heavy metals were recorded at Al-Batts drain (B1) and Al wady (w1) seasonally, where The distribution patterns of heavy metals at Al-batts drain (B1) followed an abundance of: Fe>Zn>Mn>Pb>Cu seasonally accept autumn and Fe> Mn> Zn>Cu>pb at Al-Wadi Drain (W1), seasonally. Also, the results revealed that Al-Batts drain contained more heavy metals concentrations than Al Wady drain. These high concentrations of trace elements at Al-Batts drain (B1) and Al wady (w1) may be because of surrounding cultivated land and two huge drain of lake Qarun that cause agricultural and sewage wastes to discharge into the lake. Higher values in Al-Batts drain than Al Wady drain could be because of the effect of pollution sources in this site which coming from Al-Batts Drain and many anthropogenic activities in this area of the lake. Also, the present data indicated that the trace metals levels decreased as the distance from two pump stations and two drains increased. This can prove that these areas (W1, B1, P1 and K1) are the main cause of pollution and more harmful than other sites.

Our results of heavy metals were in agreement with those obtained by the authors [12,13]. In the current study, Iron (Fe) recorded the highest concentrations among other metals in Lake Qarun water. The maximum mean value (233.7 ± 20.4 μg/l) recorded at Al-Batts Drain While the lowest mean value (107.13 ± 11.4 μg/l) recorded at Khor Al-hitan station, it still below the permissible level (300 μg/l) [14]. Increasing of Fe concentration may be attributed to the dissolution of sediments and release of iron to the overlying water. The lowest values at Khor Al-hitan station may be due to the oxidation of Fe+2 to Fe+3 and precipitated as hydroxide at PH>7 in presence of high oxygen as appeared for this site. Our results of Fe concentrations agreed with those reported by the authors [15,16].

In the present study, the mean levels of Copper (Cu) in the Lake Qarun water ranged between (2.11 ± 0.08 – 5.68 ± 0.46 μg/l). It still below the permissible level (1000 μg/l) permitted [13]. The decrease of Cu value in Lake Qarun water is could be because of its tendency to form complex with organic legends and humaic matter which leads to decreasing in the precipitation of free ion in water where 90% of Cu in water was complexed by dissolved organic materials and suspended matter.

In the present work, the maximum mean value of Manganese (Mn) in lake Qarun water was (14.96±1.18 μg/l) showed at Al-Batts drain , it still below the permissible level (500 μg/l) [14]. This increase value of Mn at Al-Batts drain could be because of the impact of waste water eluents coming from this drain.

The results revealed that Zinc (Zn) occupies the second most abundant element among metals in Lake Qarun water, the maximum mean value obtained (43.60 ± 15.1μg/l) at Khor Al-hitan station, it still below the permissible level (5000μg/l) [14]. The increase value of Zn among metals give evidence that industrial and agricultural sewage having higher amount of trace elements (rich with Zn).

In the current data, the mean maximum value of Lead (Pb) in Qarun lake water was (7.35 ± 2.92 μg/l); it still below the permissible level (50μg/l) [14]. The degree of lead toxicity depends mainly on: pH values, water hardness, organic matter and the presence of other metals. Its toxicity increased at lower PH and low solubility.

The present data indicated that the heavy metals levels decreased as the distance from two pump stations and two drains increased. This can prove that sampling sites (B1, W1, P1 and K1) are the main source of pollution and more polluted than other sampling points. So the agriculture waste must be managed to reduce and prevent the pollutions in the lake. This will be reflected on the production and health of the fish then the human.

Copyright: © 2019 Mohamed AS, et al. This is an open-access article distributed under the terms of the Creative Commons Attribution License, which permits unrestricted use, distribution, and reproduction in any medium, provided the original author and source are credited.