2nd Edition of New Frontiers in Renewable Energy and Resources

Anthropogenic sources are the great contributor of heavy metals (especially toxic heavy metals) into the aquatic and terrestrial ecosystems, posing threat to the health of human and animals [1-9]. Exposure to heavy metals and their increase in human body starts at an early age through food consumption [10,11]. Heavy metals are those metals/elements having atomic number greater than 26 or having density greater than 5 gcm-3 or more [12]. Long biological half-life, endurance, and non-biodegradability by micro-organisms can cause them get stored within soil-plant-food chains. They are very perilous because of their toxicity, bioaccumulation and biomagnification abilities when found in living tissue [13]. Presence of these metals in substantial amounts in the environment designates a probable health risk for human along with the environment [14,15].

Hens and ducks’ eggs are enriched with nutrients that are very important for human health [16]. They can act as an active delivery system in the food chain that can regulate nutrients, vitamins, proteins, fat and so on [17]. Eggs are easily digested by human which deliver essential nutrients for the proper body growth and strong maintenance of body tissues [18].

The heavy metals like Cadmium, lead, arsenic, mercury, selenium, and chromium are the most harmful and poisonous heavy metals that are of matter great concern. Though chromium (III), vanadium, manganese, iron, cobalt, copper, zinc, and molybdenum and other mineral elements known as micronutrient for humans and some other animals of nutritional significance which also fit in this category include vanadium, manganese, iron, cobalt, copper, zinc, and molybdenum [21,22]. Micronutrients are toxic when taken in above the threshold levels [23]. Furthermore, cadmium, lead, arsenic, mercury, selenium, chromium, manganese, nickel, copper, and zinc contents are being extensively used in profitmaking poultry feeds. Pb, Cd, Hg and As are non-essential elements and even toxic in trace levels [24]. The studies on heavy metal content in eggs have been widely reported in the literatures [17,24, 25-30].

Poultry meat and egg have always been great sources of protein for human and their consumption have augmented recently [31]. Approximately 40% uptake of lead is from egg is reported in children [32]. Research on the mineral content of eggs is becoming progressively essential for many causes that are closely associated with health and the nutritional value of eggs, the effects of egg metals on embryonic growth and the use of eggs as bio-indicators of environmental metal pollution [16,33]. Consequently, monitoring and estimation of heavy metals is of great importance for nutritional, toxicological and ecological aspect [30]. Limited works have been carried out in Bangladesh on heavy metal determination in eggs of hen and duck. For this present study was conducted to estimate the concentration of heavy metals in hens and ducks along with its probable effects on human health.

The present research was carried out in Chowdhury Hat and Hathazari, Chittagong, Bangladesh (Figure 1). Chittagong city is the port city in the country with coastal seaport and financial centre. This city has more than 2.5 million population even though the metropolitan area has a population of 4,009,423 reported at the Census of 2011. Poultry eggs and meats occupied a large portion to meet nutrient requirements of these huge population. A total 9 of samples of feed were collected from the study area. Samples of three types of broiler feed (starter, grower and finisher) of three different brands were purchased from local markets. These feed brands are commercially available in Chittagong region.

Samples were carefully handled to avoid contamination. Glassware was properly cleaned by Chromic acid and distilled water. Analytical grade chemicals and reagents were used throughout the study. Reagents blank determinations were used to correct the instrument readings. The heavy metal contents of collected feed were determined by AAS (Model-iCE 3300, Thermo Scientific, Designed in the UK, Made by China) and by complying standard procedures.

Metal standard solution was prepared for calibration of the instrument for each element being determined on the same day as the analyses were performed due to possible deterioration of standard with time. All samples were prepared by the chemicals of analytical grade with distilled water. About 1 gm of Cadmium, and Copper was dissolved in HNO3 solution; 1 g of Iron was dissolved in HCl solution; 2.8289 g K2Cr2O7 (=1g Chromium) was dissolved in water and made up to 1 liter in volumetric flask with distilled water, thus stock solution of 1000 mg/l of Cr, Cd, Fe, and Cu were prepared (Cantle, 1982). Then 100 ml of 0.1, 0.25, 0.5, 0.75, 1.0 and 2.0 mg/l of working standards of each metal except iron were prepared from these stock using micropipettes in 5ml of 2N nitric acid. 100 ml of 2.0, 2.5, 5.0, 10.0 and 20.0 mg/l of working standards of iron metal were prepared from iron stock solution. Reagent blank was also prepared to avoid reagents contamination.

Atomic Absorption Spectrophotometer was setting up with flame condition and absorbance was optimized for the analyses. Then blanks (deionized water), standards, sample blank and samples were aspirated into the flame in AAS (Model- iCE 3300, Thermo Scientific, Designed in UK, Made by China). The calibration curves obtained for concentration vs. absorbance. Data were statistically analyzed using fitting of straight line by least square method. A blank reading was also taken and necessary corrections were made during the calculation of concentration of various elements.

Environmental anxieties have increased recently and the estimation of trace metals in domestic and free-living bird’s eggs also required [34,35]. Kan and Meijer reported that toxic substances enter into the eggs from feeds [36]. Exceeded level of heavy metals are responsible for lowered reproduction or other detrimental effects [37-44]. Eggshell is thinning by the effects of heavy metals that causes reproductive failure [45-53]. Determination of heavy metal in domestic and poultry eggs can become a vital tool for food nutritionists and environmentalists [54]. In the present study the concentrations of different metals in hens and ducks are presented in Table 1.

Table 1: The concentrations (mg/kg) of heavy metals in different parts of hen and duck (ND=Not Detected).

Chromium is an essential element for animal which supports the body to use sugar, protein and fat [55]. Mutagenic, carcinogenic and teratogenic effects [56] possessed by the Cr and it may cause adverse health effects at excess level [57]. Egg content has higher amount of Cr than eggshell that was similar to the previous data [56] . The average concentration (0.06 ppm) of Cr was recorded less than the amount stated by Gormican (0.52 ppm) and (0.16 ppm) [58,59]. Mean concentrations of Fe and Cu in hens and ducks is shown in Figure 2. 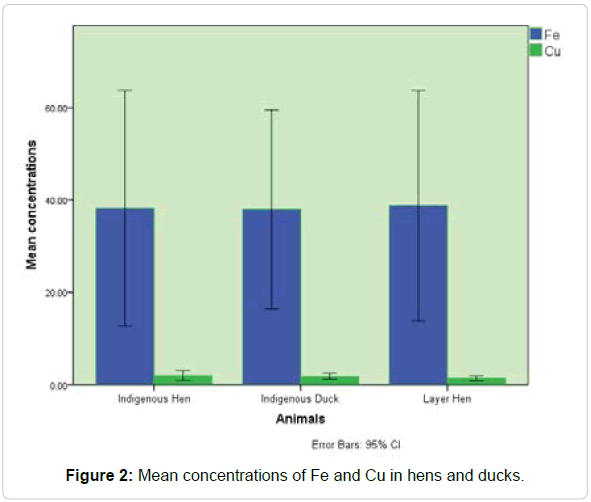 Figure 2: Mean concentrations of Fe and Cu in hens and ducks.

Cadmium content of egg has a positive correlation with increased cadmium content of feed [60,36]. This increasing trend is also reported by Zmudzki and Szkoda [61]. In the present study cadmium concentrations in hens and ducks was recorded below the detection limit. Similar results was reported by and detected from any hen egg samples (Table 1) [62]. Fakayode and Olu-Owolabi recorded the average concentration of Cd in eggs was 0.07 mg/kg which was relatively greater than the limit set by local and international standards [61,63]. The mean concentrations of Cd in eggs are similar to value found by the United Kingdom national diet study and as reported by Schroeder et al. [64] Van overmeire et al. found average cadmium level of 0.53 and 0.27 mg/ kg in profitable farms egg [65]. Cadmium content was recorded in eggs was 0.07 mg/kg which was comparatively greater than the levels found in other countries [63]. The permissible limit of cadmium is 0.05 ppm (23) and all of the egg samples in the present study was found below the permissible limit. Mean concentrations of Fe and Cu in yolk & albumin of hens and ducks is shown in Figure 3. 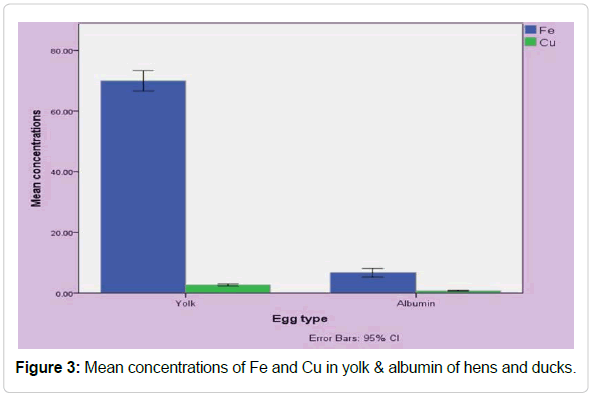 Figure 3: Mean concentrations of Fe and Cu in yolk & albumin of hens and ducks

Low level of copper is an essential for hens and ducks but toxic at higher concentrations [68]. Moreover, Cu plays vital role in the metabolism [69]. It is important to estimate the Cu concentrations in eggs since its carcinogenic effect on consumers which can be serious threat to liver and kidney [54]. The concentrations of Cu in hens and eggs are studied are presented in Table 1. The amount of Cu ranged from 1.85-3.95 mg/kg in yolk of hens and ducks while in albumin these values ranged from 0.25-1.15 mg/kg. In yolk the highest value 3.95 mg/kg was recorded in the indigenous hen’s eggs whereas the lowest concentration 1.85 mg/kg was found in eggs of layer hen. In albumin the maximum value 1.15 mg/kg was found in indigenous duck’s eggs whereas the minimum value 0.25 mg/kg was found in indigenous hen’s eggs (Table 1). Siddiqui et al. recorded the copper concentration in free roam eggs sample in the range 4.7332-6.5781 μgg-1 [24]. Waegeneers et al. found 0.60 and 0.51 mg/kg Cu in eggs from private owners and commercial free range chicken egg in Belgium [62]. 0.43 mg/kg in autumn and 0.52 mg/kg in spring was found in the home produced egg in Belgium [63] while 0.59 mg/kg in fresh egg 0.78 in Nigeria [66,70] and 0.62 mg/kg in British eggs [11]. The present study results are differ greatly from the levels determined in eggs from these results and are within permissible limit (10 ppm) [65].

The concentration iron and copper were found to be high compare to other scientific findings but the amount of chromium and cadmium was found below the detection limit. Substantial differences were found in the concentrations of Fe and Cu in yolk as well as albumin though no significant variations was found in terms of animal type. No specific standard was set by the concerned authority of Bangladesh. Hence, a definite standard should be provided for heavy metals to maintain the food chain safe from heavy metals. Further study is needed to monitor the effects of heavy metals containing poultry feed in human health.

The authors are grateful to the Bangladesh Council of Scientific and Industrial Research (BCSIR), Chittagong, Bangladesh for providing facilities in heavy metals test in the laboratory. Authors also express their gratefulness to the honorable Editor and reviewers for their valuable constructive comments. Their continuous suggestions were important to increase the paper excellence.

Copyright: © 2019 Kabir A, et al. This is an open-access article distributed under the terms of the Creative Commons Attribution License, which permits unrestricted use, distribution, and reproduction in any medium, provided the original author and source are credited.