Umurbey River is one of the big rivers which drains through Dardanelles. Sediment samples collected from talvegue points along the upper and lower streams the main rivers in Umurbey (Turkey). The main aim of study, heavy metal levels in the Umurbey river sediments identifying intended to create a database for the future. Sediments were subjected to content analysis on the heavy metals like Mn, Fe, Ni, Cu, Zn, Pb, and Al from the river sediment for the purpose of environment assessment. It’s were analyzed by either atomic absorption spectrophotometry. Analyses of the whole sample as well as the fine fraction (<63 μm) of the samples were carried out. The data show remarkable high metal level in Mn (1959.8 ppm) concentration. Umurbey River has effecting by to natural background reservoir.

It is impossible to be thrown away by means of faces from bodily construction of living organisms in the geographical agriculture area. Biological accumulation occurs in their living muscle tissues and grease. Heavy metal accumulation happens at the strapping living creatures that use it up as nourishment. Heavy metals reach to a person by going into his/her food chain. This study is carried out with an aim to being determined of heavy metals’ concentration, which is dangerous for environmental health.

Iron is mostly found in the nature. Iron can be change by means of O2 and CO2 balance. Iron goes into liquid solution as being HCO3 when two valuable irons come together with water and CO2. But it must be O2 for its’ being stable. In oxygenated environments, iron hydroxide (III), which cannot dissolve in water, comes into being and falls down. In these happenings pH and O2 are important [2]. Nickel is being with Cu and Fe. Benefiting areas of nickel are so wide (electronically things, money, car battery, steel alloy, food, etc.). If it is evaluated for human body: if it is taken by means of digestion, most of it is thrown away with feces. If it is taken by means of respiration, throwing increases with urine. Most nickel salts are costic and irritant. It causes death in 20 minutes when its concentration (Ni Co)4 in the atmosphere exceeds 30 ppm [3]. Copper is an element with toxic character. They become more toxic when they are being together in the copper and chlorinated environment. Cu2+ is the most toxic matter in an ionic condition. State of being poisonous is index-linked to physical and chemical features of the environment. But it is so important that human body gets into the enzymatic reactions. In adult, there is 100-150 mg copper [3]. There are different opinions on Zinc whether it makes toxic effects. Zinc is an element, which is mostly being in the human body and mammals. It is also seen in several enzyme systems. The effects of decreasing zinc are seen on prostate, hair, bone (stored as Pb), liver, kidney, muscles, pancreas, stomach, intestine, tractusu, and spleen and blood tissues. There is no evidence as Zinc with extreme dose shows carcinogenic, mutagenic, and teragenic features. But test on animals show that mineral and enzymes are affected from extreme zinc [4]. Lead is a heavy metal, which has toxic effect on human life. It goes into human body by means of food, water, and air. Lead accumulated in tissue of humans and mammals causes being poisoned after some time. Children are more sensitive than adults in this situation. As a result of lead poisoning, brain damage, anemia, navel damage, and neurological functional changes are seen. Lead compounds dissolved in water have poisonous effects on the sea animals. It is known that thin scattered lead sulphide, which could not dissolve in water, causes fishes to die in two months. Colloidal or organic lead compounds are absorbed in fish gills. It is supposed that lead, whose pH decreased on the gill surfaces owing to CO2 passes through tissue [5]. Aluminium shows toxic feature connected with doze. Aluminum usage fields are fairly wide. It is used widely in industrial areas. It is known that it makes negative effect on human metabolism.

Sediments samples taken from river sediments in summer of 2006 to are exposed to with Loring and Rontala [6] and Shaw and others [7] methods are used in the ‘total metal’ solubility processes.

Chemical materials is temperature plate, jar, lid/cover, automatic fire, hot plate, hypodermic syringe with 10 cc, balloon joje with 50 cc, battle with 100 cc and sensitive balance. Chemical analysis at the sediment illustration taken from the talvegue point of the Umurbey River, Mn, Fe, Ni, Cu, Zn, Al, Pb are studied in 2007. The samples are evaluated at the Institute of Marine sciences and Management department of Istanbul University and the analysis at the air-acetylene flame of Shimadzu AA-6701-F Atomic Absorption Spectrophotometer and aluminum is at the flame of acetylene are measured. Standard bents and equations are like this:

River of Umurbey, which is on the northeast coast of The Dardanelles on the Anatolia Peninsula, is located in the boundary of Umurbey town of Lapseki district (Figures 1-3). 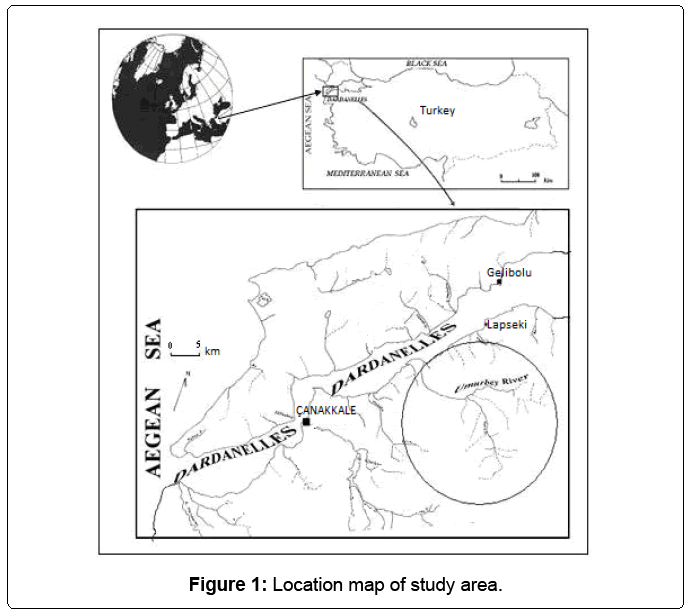 Figure 2: Appearance from Umurbey River in the summer 2007. Umurbey River with 873 meters height joins with Kurudere on the west after getting its source from the Dede Mountain and Kaplan Mountains. It is poured into The Dardanelles after going through Umurbey plain. Umurbey River takes its name from a town called as, Bergaz’ during the Ottoman Empire and it is changed as Umurbey during the Republic. The names of the settlements, that it has interaction with, are “Umurbey” town, “Kemiklialan” village Beybas, Sindal and Kangirli” villages.

The soil of River of Umurbey’s shore has its alluvial quality. Besides this, there is brown forest soil. Around Canakkale and Lapseki road, limy and clayey type of soil is seen. Climate, soil, exposure, elevation and human factors have a great influence on the natural plant cover. On a vast scale of the land, there are intensively kinds of Quercus (Quercus valonea, Quercus infectoria, Quercus cerris, Quercus coccifera) and kinds of Pinus (Pinus bruteia, Pinus nigra) (Ilgar). The large-grained soil type on Sarikaya Hill has a poor quality from the point of its stony structure and plant cover.

There are peach and cherry gardens and olive graves on Umurbey Plain. Building greenhouses is also one of the important parts of the agricultural production. The most important threatening factors for this fauna are fires (in 1992, the fire from Can to Balcilar town and putting animals out to pasture (goat and cattle training). Besides this, another negative factor is being salted of the soil. Ciftlik plain can be given as an example for this. In this plain, agricultural production cannot be done because of high salinity values.

This plain has important geographical features, which affects drainage features of Umurbey River. When heat values are examined, a winter passes mildly. The heat averages of several year summers have 24ºC heat average values. Summer drought is also seen. As a result of this, the flow of Umurbey River in the summer months fairly falls down. Moreover, as a result of the continuous works of Umurbey dam, which is laid the foundation in 1984 to irrigate 2445 ha agricultural land, the big falls on the river during the summer months make the river to come to the point of drying. When the falling features are examined, with effect of the Mediterranean climate, it mostly rains during the winter months not in the summer. The early falling average is 621.5 mm. It densely rains in December (110 mm). Falling rates of the summer months are so low. In August, the minimum rates are seen (6.8 mm) [8]. The number of snowy days according to the average of meteorological observations is 3.4 days. An average number of freezing days are 23.9 days. NE is the dominating wind direction. The relative humidity rate is 73 %. As gone to the upper watercourse parts of the Umurbey River, the relative humidity decreases. The reason of this is both being away from the sea and efficiency of the cold and most air masses, which come from the Balkans. Again the average number of freezing days according to Canakkale Meteorology Station is being determined as 2.2 days and number of frosty days is 19,0. Yearly, an average number of overcast days are 68.4, number of foggy days is 5.1 and the average density of clouds is measured as four in ten [8].

According to these gained information, manganese, lead and zinc values are excessively estimated at the sediment of Umurbey River (Figure 4). Samples result is shown in Table 1. 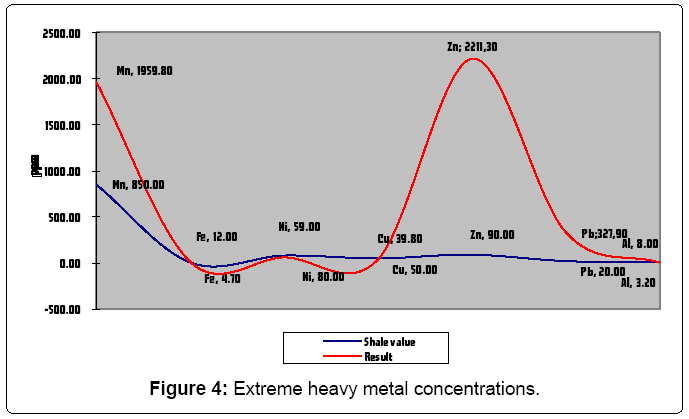 The main theme makes these values to increase is the fact that there is no industrial factory at that region. Because, there is no factory activity at the riverside and at the field for affects the river. It will be more suitable to evaluate this pollution as attribute of Massif Base. It is possible with these findings that there may be Zinc, Lead, and Manganese reserves at the Dede Mountain. Study has a feature to be a data bank to the attempts of looking for mine. Umurbey River is natural based at parameters of pollution. Its source is the Dede and Kaplan Mountains whose height is 873 m. This mine is already being worked up. That is to say, heavy metal concentrations have reached high levels by the help of the fact that they carry the characteristics of the rivers and the features of the land as a result of abrasion and melting. 1959.8 ppm that is the rate of Mn concentration is a very high rate in Umurbey River.

Umurbey River has extremely heavy metal concentration. Umurbey River is natural based at parameters of pollution. The result of this study suggests that though the high levels of metals accumulations of Mn, Pb and Zn may significantly increase with background potential. As below Table 2 shows 1959.8 ppm that is the rate of Mn concentration is a very high rate in Umurbey more than some rivers of Europe, USA, Australia, Africa. Most close level observed in Nile study [9] and Although Fe, Ni, Cu is a seeking metal that tend to precipitate in sediments, experiments carried out at concentrations lower than other value found in this study.

Table 2: Heavy metals concentration of sediments of some rivers.

Metal source is the Dede and Kaplan Mountains whose height is 873 m. Mine is already working in this area. That is to say, heavy metal concentrations have reached high levels by the help of the fact that they carry the characteristics of the rivers and the features of the land as a result of abrasion and melting.

Copyright: © 2015 Rustu ILGAR. This is an open-access article distributed under the terms of the Creative Commons Attribution License, which permits unrestricted use, distribution, and reproduction in any medium, provided the original author and source are credited.
Top