A reconnaissance study of soil properties is realized in the implantation area of the future town of Ain Harouda (Morocco). This study used two approaches: geotechnic and geophysic. The geotechnical approach begins with 11 mechanical core drilling and 5 wells using mechanical shovel with sampling for laboratory testing and particularly identification tests. This study showed that the settlement area of the new city of Ain Harrouda consists of a primary base consisting of schists and quartzites. These are surmounted by conglomerates and calcarenites plio-quaternary age. It also determined the intrinsic characteristics of the each geological formation that make up the study area, include water content, density, particle size analysis by sieving, sedimentation particle size analysis, the value of methylene blue (VBS), the equivalent of sand, limits Atterberg. The geophysical approach consists of electrical resistivity technique with 5 vertical electric sounding and 8 electrical tomography profiles. This approach was used to determine the resistivity corresponding to each type of land and also the consistency of the soil. It allowed to distinguish the substratum characterized by high resistivity (more than 3000 ohm.m), and the sedimentary cover represented by three classes of average resistivity: 200 to 1600 Ohm.m for calcareous sandstones, 50 to 100 Ohm.m for silty sands, and very low for clays (less than 50 ohms. m). The results obtained shows that the study area appears healthy and suitable for the construction of the new town of Ain Harrouda.

The construction of the new town of Ain Harouda (Morocco) requires prior recognition studies of soil properties on which will be built this city. This is done using two independent but complementary technics which are the geotechnic and the geophysics. Geotechnics mainly based on the recognition of mechanical properties of soils [1]; while geophysics, studied the physical properties of the latters [2,3]. The results of these two approaches will be used thereafter by planners for establishing the ground plane of the projected new city [4].

The new town of Ain Harouda (Morocco), will stretch along the Atlantic coast between the two cities Casablanca and Mohammedia, on a coastal strip of 6 km length ranging the SE Mohammedia to NE of Casablanca, and a width of 4 km ranging from the coast to the inside the country [5]. Its area is more than 1,700 ha (Figure 1).

Figure 1: Location of the new town of Ain Harouda [5].

The study area is located in the Meseta domain. It consists of consolidated dunes taking on the appearance of elongated hills parallel to the shore. These dunes are composed of Plio-Quaternary sandstone and sandy formations of a few tens of meters thick, sitting on a Cambro Ordovician bedrock, composed of schist and quartzite [6,7,8]. Recently, studies have revealed neotectonic deformations in Plio-Quaternary deposits in this region [9], and particularly probable fault oriented NE– SW in south extremity of Zenata city (Figure 2). • In-situ studies: 11 mechanical core holes, and 5 wells excavators (SG1 to SG5) with sampling for laboratory testing (identification tests). The implantation sites of wells and boreholes were selected after examining the geological map, documentary research, and field investigations (Figure 3). The scale of the depth data "1.10 to 2.20". While boreholes down to 50 m. Figure 3: Intrinsic characteristic of sediments encountered in the well SG4.

• Laboratory studies: samples taken in each of five wells were subject a lithological description and identification tests. This latter includes water content (W), density, granulometric analysis by sieving, sedimentation particle size analysis, value of methylene blue (VBS), equivalent of sand, and Atterberg limits. All identification tests were performed according to the French standard [10-13].

(a) The Schlumberger vertical electrical sounding (VES): The Schlumberger VES investigation measures the changes in formation resistivity with depth [14] (Figure 4). It requires that current electrodes spacing, AB is increased after every reading while potential electrodes spacing, MN is kept constant for most readings but increased when necessary using the control AB/2 > MN/2 [15]. In our case, the sedimentary cover on the basement is not as thick as to warrant large current electrode spacing for deeper penetration therefore the largest current electrode spacing AB used was 200 m, that is, 1/2AB=100 m. For this survey, five vertical electrical soundings were performed (figure 5). The principal instrument used is Geotrad. With the Schlumberger vertical electrical sounding (VES), the obtained apparent resistivity data ρa were plotted against half current electrode spacing (1/2AB) on a log-log scale. The curves were then interpreted qualitatively by visual inspection and quantitatively by partial curve matching and modelled using computer iteration with the aid of Winsev version 6 computers software to generate depth strata for analysis. 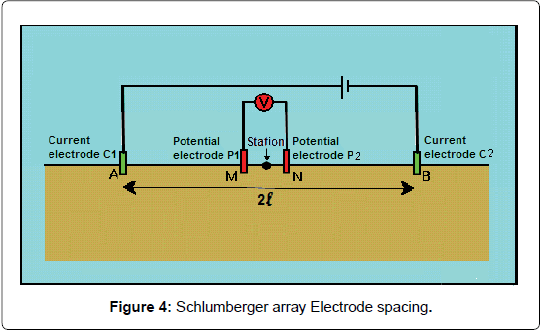 (b)Electrical Resistivitity Thomographic Pseudo-sections: Electrical tomography gives an idea of changes in subsurface resistivity in 2D, i.e. the both lateral and vertical along the line of electrodes [16]. It in fact corresponds a succession of electrical surveys one beside the others. For this, an array of electrodes is installed along a rectilinear profile with a constant spacing chosen to optimize the length of the profile, the depth of investigation and the desired resolution. Measurements are presented as a pseudosection of apparent resistivity as a function of the position along the profile. In this study eight profiles of 630 m each have been used (Figure 5). The spacing between the selected electrode is 10 m, and the acquisition hardware used is Terra meter LS.

• The field studies well as those of drilling until 50 m depths show that the geological formations of the study area are all of sedimentary origin and consist of primary plinth formed of schists and quartzites of Cambro-Ordovician age; above, come the Plio-Quaternary formations usually composed, from bottom to top by coquina conglomerates, surmounted by marine calcarenite beach, passing progressively dune calcarenites intercalated locally by rubefies and often altered continental spreading.

The identification tests carried out on samples taken from each of the five wells were used to determine the intrinsic characteristics of different lands that form the study area (water content W, expressed in %, Value of Methylene Blue of Sol, VBS, liquid limit WL, plasticity index IP and granulometric analysis). An example of results concerning the well SG4 is given in the table below.

The sounding curves obtained by the vertical electrical sounding Schlumberger (VES) have in the general form of "inverted cloche" which translates, first, by a decrease in the apparent resistivity values followed by an increase of these. This form of electrical diagram sounding matching to a model of the basement formed of at least four layers, corresponding to the superposition of two resistant terrains, separated by a third conductor, and sitting on a conductive substratum.

We give two examples of vertical electrical sounding, those of SEV1 and SEV3 (Figures 6 and 7). 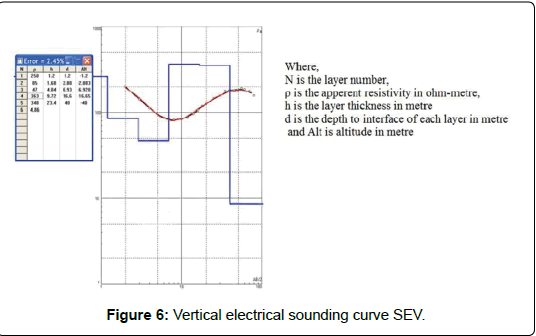 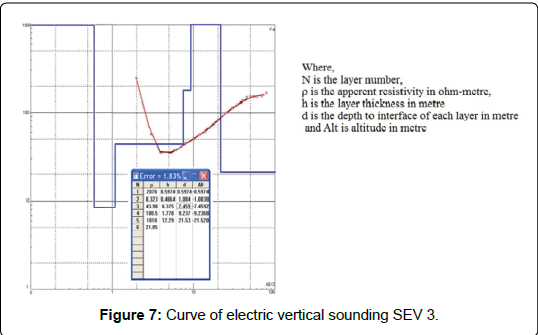 Curve of this sounding SEV1 above survey brings out from top to bottom the following entities:

• A resistant level R2 (ρ=363 Ohm.m). The characteristics of this terrain are calcareous.

• A conductor C2 (ρ=4.86 Ohm.m) terrain. This sudden drop in resistivity may be caused by the intrusion of saline Atlantic waters.

• The curve of this sounding brings out from top to bottom the following entities:

• A conductor level C1 (ρ=43 Ohm.m) representing micaceous sandstone fractured which are the subject of thin aquifer of water.

• The results obtained by electrical tomography are represented by three images (Figure 8). 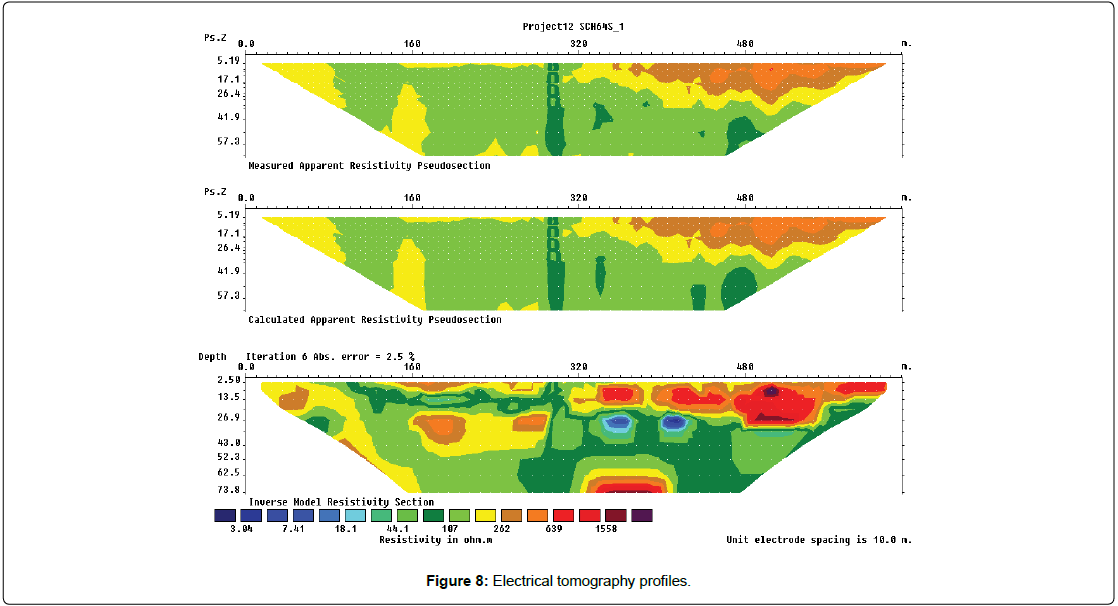 Electrical tomography profiles whose average depth of investigation is 70 m, sometimes up to 130 m can give an image of the basement of the future city of Ain Harrouda (Figure 9). They show resistivity 200- 1600 Ω.m corresponding to calcareous sandstone exposed in places like the above profile. Medium resistivity around 50-100 Ω.m representative loamy sands. Low resistivity, below 50 Ω.m corresponding clays. While the substratum, it is deeply marked in depth by high resistivity superior to 3000 Ω.m, as the profile below where only the inverse model resistivity is shown.

In addition, concerning the search on the field of the fault NE-SW suspected in the study area, none of 8 profiles electrical tomography performed on the probable line of the fault or either side of it was able to show clearly the presence of such a fault.

The preliminary study developed in this work shows that the geographic study area appears healthy and suitable for the construction of the new town of Ain Harrouda. The geotechnical approach currently serves as a guide for planners to establish the ground plane of the new city. The results obtained so far concern the identification tests. They must be supplemented by mechanical tests on soil and rock.

The geophysical approach, vertical electrical sounding and electrical tomography allowed the determination of the consistency of the soil will be sitting the works that will be projected in the study area. It shows a lateral variation of electrical resistivity clearly visible. The substratum is characterized by high resistivity (greater than 3000 Ohm.m); and sedimentary cover is represented by three classes of resistivity, medium for calcareous sandstone (200-1600 Ohm.m), low for loamy sands (50- 100 Ohm.m) and very low for clays (less than 50 ohm.m).

Copyright: © 2017 Lemacha H, et al. This is an open-access article distributed under the terms of the Creative Commons Attribution License, which permits unrestricted use, distribution, and reproduction in any medium, provided the original author and source are credited.
Top