Four Periodical Natural Big Disasters of the Planet Earth during Each Precession Cycle, Caused By Its Motion (New Theory)

Four Periodical Natural Big Disasters of the Planet Earth during Each Precession Cycle, Caused By Its Motion (New Theory)

Gyroscope moment rotates Earth inner core vertically because of its unstable “egg” shape. The rest ellipsoidal part of the planet has opposite vertical motion. That is the polar shift. The Sun appears on the west. New angular velocity direction of the core and no homogeneous gravity field of the Sun cause acceleration of the core self-rotation with corresponding increasing of the Earth magnetic field, pushing the planet away from the Sun during millenniums. Sinus law of the core rotation makes significant jump in acceleration 6,500 years after causing new centrifugal redistribution of the planet water more concentrated around the equator area, followed by big earthquakes and volcano eruptions. It is a big flood. Planet with accelerating self-rotation of the inner core continues to leave sunny area approaching to the ice period. The shape of the core is ellipsoidal then, giving the chance to the “sunny” moment to rotate it vertically again 13,000 years after. The Sun appears on the east. It is another polar shift. New conditions cause mild slowing down of the core self-rotation pushing the planet toward the Sun. Magnetic field is slowly decreasing. 6,500 years after the same sinus law influences sharp decreasing of the angular velocity of the inner core. New redistribution of the planet water from the equator to the north and south appears, followed by big earthquakes and strong winds. It is famous big flood we “remember” it. The planet is approaching to the Sun losing angular velocity of its core and good shape for good stability. 6,500 new years and new global warming with new polar shift are in front of it, 26,000 years later.

The angular velocity of the planet is not constant in the intervals between two revolutionary events, when it rotates vertically. Earth accelerates on its path to the ice period and slows during its back to the global warming. For example, slow down happens between two leveling of the planet axis of the rotation with the solar one, what means roughly 13,000 years. Two opposite states related to big angular velocity of the core in the weaker energy field – when it is so far from the Sun, and smaller angular velocity but in stronger brake field – when it is closer to it, can’t provide linear law of these changes. Probably - some form of the sinus one (Figure 1). It gives the chance for a turbulent event in a very short period, when rapid slow down decreases centrifugal forces, causing relatively fast redistribution of the planet water to the north and south. It is famous big flood “we know it”. 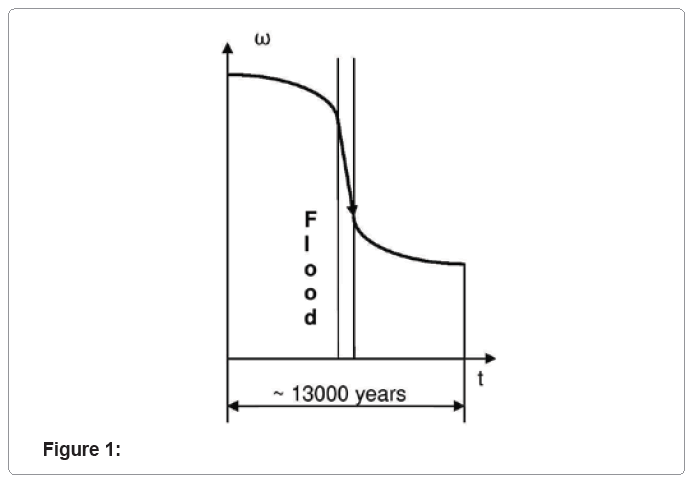 It is obviously that big flood doesn’t need new amount of the water. Restless planet only moves existing one in the function of its excitation (Figure 2). Certainly, it is followed by strong earthquakes and volcano eruptions because mechanics asks for the smaller equatorial and bigger polar radiuses in such conditions, what is too much for the weak crust. Earth passes similar phases during acceleration of its angular velocity, after “summer” cataclysm. New turbulent event in a very short period appears (Figure 3) when rapid acceleration increases centrifugal forces, causing fast redistribution of the planet water to the equator (Figure 4). It is not famous big flood, and “we don’t know it”. 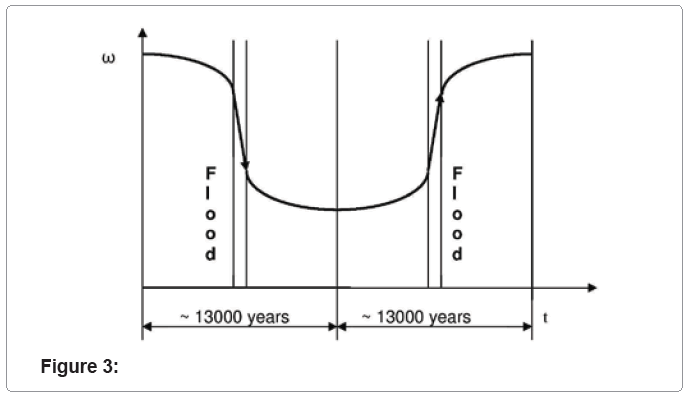 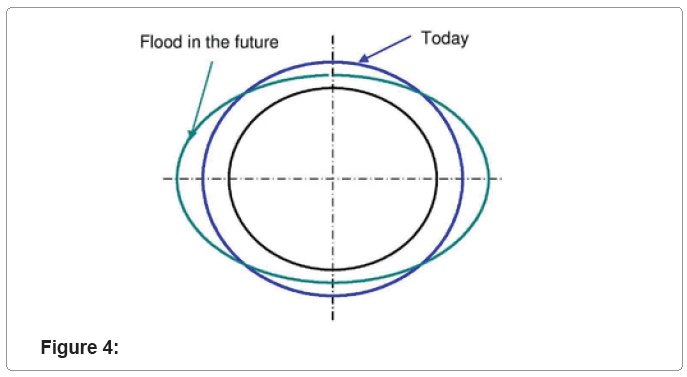 Two deep “plowings” and two big floods. It is final and standard effect of one precession year covering 26,000 ordinary ones. Four horrible disasters - absolutely contrary to some conclusions coming from geology. Earth doesn’t need meteors because it has Four Horsemen of the Apocalypse.

Copyright: © 2011 Djordjevic S. This is an open-access article distributed under the terms of the Creative Commons Attribution License, which permits unrestricted use, distribution, and reproduction in any medium, provided the original author and source are credited.
Top