The American College of Obstetricians and Gynecologists (ACOG) recommends documentation of fetal lung maturity when a delivery is performed before 39 weeks gestation [1]. Despite adherence to the ACOG guidelines preventable morbidity continues to occur in women delivered before 39 weeks gestation. Although the false positive rate of fetal lung maturity tests is very low, it may account for some of the cases where despite tests that had suggested mature lungs neonates develop respiratory complications after delivery. The risk for such complications is higher in newborns delivered by cesarean section [2] and in those delivered to mothers with diabetes [3]. It is therefore important to evaluate the occurrence of neonatal respiratory complications among babies born before 39 weeks after fetal lung maturity had been documented, especially among women with type 1 DM. 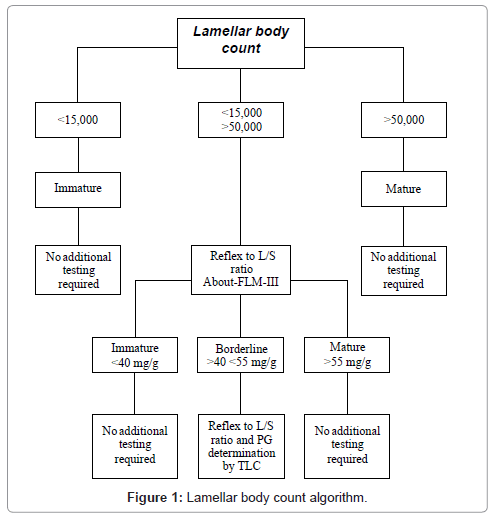 The control group consisted of neonates delivered by elective caesarean section at the same hospital during the same period after 39 weeks gestation without fetal lung maturity studies to women with type 1 DM. The women were similar by age, race, gravidity and parity, duration of maternal diabetes, and insulin requirement. Similar neonatal outcome parameters were assessed in the control group.

Statistical analysis was performed using Graphpad Software (Graphpad Software, Inc., San Diego, California); we used two tailed t-tests for continuous data and/or chi-square analysis for proportions. A p value of less than 0.05 was considered significant. The study was approved by the Institutional Review Board.

All deliveries were by cesarean sections. The indications for surgery were: 45 repeat cesarean sections (47.4%), 12 breech presentations (12.6%), 12 women had poor glycemic control (12.6%), 10 with estimated fetal weight over 4,500 g (10.5%), seven had 4th degree perineal tear during previous delivery (7.4%), seven were done at patients request (7.4%) and two had low cervical leiomyomas (2.1%). The indications for cesarean delivery in the control group were comparable to the study group.

In 1996 ACOG’s published the recommendation to confirm fetal maturity before elective delivery prior to 39 weeks gestation [1]. The validity of this recommendation was demonstrated in recent studies. Stutchfield et al. [7] reported in 2005 that delaying cesarean deliveries until 39 weeks gestation reduced the rate of admissions to neonatal special care units due to respiratory distress [7]. However, even when the ACOG’s recommendation is followed and fetal lung maturity is documented prior to delivery, a small number of newborns delivered by elective deliveries before 39 weeks gestation develop respiratory complications. The risk of such complications is increased among babies delivered early by planned cesarean section since cesarean delivery is associated with an increased risk of neonatal respiratory complications compared with vaginal delivery. Recently Kamath et al. [2] conducted a retrospective study on neonatal outcomes after elective cesarean delivery and reported significantly higher rates of respiratory morbidity, NICU admissions, and longer hospital stay compared to vaginal birth after cesareans.

The positive predictive value of fetal lung maturity tests is over 95%, [1] however, some test results can be falsely positive. Women with diabetes, especially when poorly controlled, may have delayed fetal lung maturation, an increased risk of false fetal lung maturity test results, or both [1]. In 2002, Moore postulated that fetal pulmonary maturation, as evidenced by the onset of posphatidylglycerol production in the amniotic fluid, is delayed in pregnancy complicated by maternal diabetes by 1 to 1.5 weeks [3]. The possibility of false positive test results may be even higher in pregnancies complicated by pre-pregnancy diabetes. The risk of a false positive test may be minimized by avoiding fetal lung maturity all together: in a recent study, Kjos et al. [8] studied the rate of Respiratory Distress Syndrome (RDS) among newborns of diabetic mothers and concluded that routine FLM testing did not change the prevalence of RDS when pregnancies were reliably dated, and suggested that such testing be abandoned. They also reported that cesarean delivery was associated with an increased rate of RDS [8].

It is possible that the method we used for assessing fetal lung maturity in these women was responsible for the relatively high number of newborns with respiratory complications. The algorithm we used for testing fetal lung maturity was previously described in an earlier study [4]. It was based on a consensus protocol published by Neehof and his associates in 2001 [5]. We previously reported that employing this algorithm for analyzing amniotic fluid samples resulted in a significant monetary saving [9]. Recently Janicki et al. [6] questioned the 50,000 lamellar body count thresholds and demonstrated the need for hematology analyzer specific thresholds.

This was a retrospective cohort study conducted at a single tertiary care center; nevertheless, it raises concern regarding elective cesarean deliveries performed prior to 39 weeks gestation, especially in women with type 1 DM. Similar findings were recently reported by Kamath et al. [2] who conducted a retrospective study of neonatal outcomes among non-diabetic mothers who underwent elective cesarean delivery. They observed significantly higher rates of respiratory morbidity, NICU admissions and longer length of hospital stay compared with newborns delivered vaginally [2]. It should be noted that we did not study other potential neonatal complications that may also develop in immature neonates.

Providing appropriate medical care limits physical and emotional hardship to newborns and their families and contributes to patient’s satisfaction. The financial savings associated with avoidance of costs associated with prolonged care and delayed hospital discharge is an additional benefit.

Preventing adverse neonatal outcomes is one of the higher priorities of obstetric care. Our findings emphasize the importance minimizing the number of elective cesarean deliveries prior to 39 weeks gestation, especially in women with pre-pregnancy diabetes mellitus.

Copyright: © 2012 Ventolini G, et al. This is an open-access article distributed under the terms of the Creative Commons Attribution License, which permits unrestricted use, distribution, and reproduction in any medium, provided the original author and source are credited.