Exposure to Nicotine in Adult, but not Adolescent, Rats Increases Alcohol Self-Administration in Adulthood

Exposure to Nicotine in Adult, but not Adolescent, Rats Increases Alcohol Self-Administration in Adulthood

Among drugs of abuse, nicotine and alcohol are the most consumed in the world, and are often co-abused. Evidence has shown that nicotine enhances the consumption and subjective effects of ethanol. How nicotine increases alcohol consumption is an interesting question that is still left unanswered. We assessed whether repeated treatment with nicotine during adolescence or adulthood could increase operant alcohol selfadministration. Male adolescent and adult rats (postnatal day [PND] 28 and 60, respectively) were injected with nicotine (1.0 mg/kg, subcutaneously [s.c.], three times a day for 10 days). During this period, the control group received saline injections (0.1 ml/kg; s.c). On PND 72, adolescent and adult rats pretreated with nicotine were subjected to ethanol self-administration procedures. Alcohol oral self-administration patterns were evaluated using a progressive ratio schedule of reinforcement and 24-hour unlimited access to ethanol. Our results showed that nicotine pretreatment in adult rats increases the motivation for alcohol consumption. However, nicotine exposure during adolescence does not affect alcohol-consuming behaviors in adulthood.

Nicotine and alcohol are the most consumed drugs of abuse in the world and are often co-abused [1]. Epidemiological studies indicate that alcoholism is more prevalent in smokers than in non-smokers [2-5]. Evidence has shown that nicotine can increase alcohol consumption in humans [6-8]. In addition, several pre-clinical studies have shown that repeated administration of nicotine concomitantly with ethanol increases alcohol intake in a home-cage bottle choice paradigm, operant self-administration, and voluntary ethanol seeking [9-15].

Despite the high prevalence of tobacco use and abuse among adolescents, and the fact that adolescent nicotine exposure appears to impact adult ethanol self-administration, the influence of nicotine on ethanol consumption has been studied mainly in adult animals. Here we assessed whether repeated nicotine administration during adolescence or adulthood could increase alcohol-consuming behaviour in adult rats.

Male Wistar rats were obtained from the animal breeding facility of the São Paulo State University-UNESP at postnatal day (PND) 21 and 60. Groups of four animals were housed in plastic cages 32 (width) X 40 (length) X 16 (height) cm in a room maintained at 23 ± 2ºC. Rats were continuously maintained on a reversed light cycle (12 hours light, 12 hours dark, lights off at 08:00 a.m.) and free access to food and water were allowed. All experiments were performed during the dark phase.

The experimental protocol was approved by the Ethical Committee for Use of Human or Animal Subjects of the School of Pharmaceutical Science-UNESP (CEP-12/2008).

Alcohol solutions were prepared by diluting ethanol in tap water at different concentrations (2%, 4%, or 6%; v/v) containing 0.05% of saccharine. The self-administration control group had access only to 0.05% saccharine solution.

Adolescents (PND 28) and adults (PND 60) were pretreated with nicotine (1.0 mg/kg subcutaneously) or saline (1.0 mL/kg), three times a day, for 10 days. The dose of nicotine was chosen based on previous experiments conducted in our laboratory.

On PND 72, adolescent and adult rats pretreated with nicotine were subjected to ethanol self-administration procedures. The general procedure was adapted from a previous study [29].

For ethanol self-administration, the animals were put individually in experimental chambers (30 x 30.5 x 24.5 cm) and enclosed in lightand sound-attenuating boxes. The floor of the chambers consisted of a Plexiglas tray covered with sawdust. The front wall of the chamber contained one interchangeable panel. The panel was equipped with two levers located 5 cm above the floor, two cue lights (red and green) above each lever, a hole, 5 cm in diameter, located 1 cm above the floor for alcohol delivery, and a session light in the middle of the panel (12 cm above the floor).

Rats were initially given unlimited access to saccharine solution (0.05%) self-administration, in which each lever press was reinforced with the delivery of 0.2 ml solution (fixed ratio schedule of reinforcement; FR1), followed by a 20-second time-out. During selfadministration sessions, a green cue light above the active lever signaled saccharine availability and a red cue light, also above the active lever, signaled saccharine delivery. During the time-out period, the green and red cue lights were extinguished and lever presses were recorded but had no consequence. Each daily session was terminated after 60 minutes of access. Three sessions of saccharine reinforcement were performed. The next two sessions of 2% alcohol solution (v/v) containing 0.05% of saccharine introduced a schedule of reinforcement (FR1) for the active lever, followed by two sessions in which we used 4% ethanol solution with saccharine (0.05%). We then provided 6% ethanol solution containing 0.05% of saccharine for the final two acquisition sessions. The control group received saccharine solution (0.05%) in all sessions.

After two sessions of 6% ethanol solution, the FR schedule was increased to fixed ratio 3 (FR3). Rats were maintained for five interspersed sessions, three hours per day with short unlimited access, on an FR3 schedule before assessing the progressive ratio schedule of reinforcement.

One day after the final PR session, each rat (PND 99) was submitted to a 24-hour unlimited access protocol, with unlimited alcohol access (0.2 mL per reinforcement of 6% ethanol solution containing 0.05% of saccharine on an FR1 schedule). The amounts of alcohol selfadministered, as well as the pattern of responding, were recorded.

Data were analyzed by two-way ANOVA considering pretreatment (saline vs. nicotine) and solution (saccharine vs. ethanol). When a significant (p<0.05) main effect was observed, the Newman-Keuls test was applied for individual post-hoc comparisons.

Figure 1A-C depicts the number of responses, reinforcements, and the final ratio achieved (break point) in a progressive ratio schedule to saccharine or ethanol in adult animals pretreated with nicotine or saline, during adolescence. 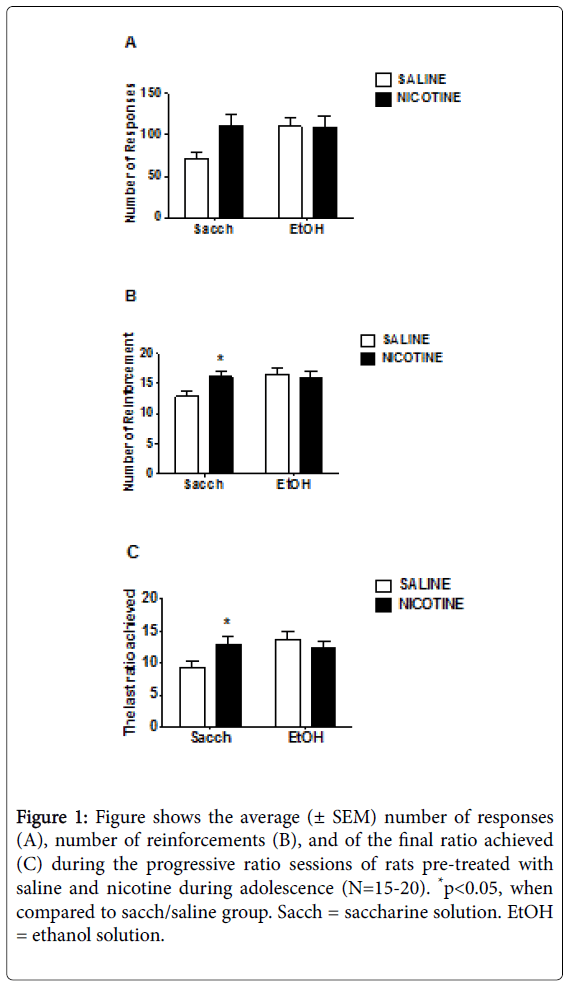 Figure 1: Figure shows the average (± SEM) number of responses (A), number of reinforcements (B), and of the final ratio achieved (C) during the progressive ratio sessions of rats pre-treated with saline and nicotine during adolescence (N=15-20). *p<0.05, when compared to sacch/saline group. Sacch = saccharine solution. EtOH = ethanol solution.

Two-way ANOVA for reinforcement indicated a significant interaction between factors [F(3,62)=4.04, p<0.05]. Newman-Keuls post-hoc comparison showed that pre-treatment with nicotine during adolescence increased the number of reinforcements for saccharine, but not for ethanol.

Figure 2A-C depicts the number of responses, reinforcements, and the final ratio achieved (break point) in a progressive ratio schedule to saccharine or ethanol in adult animals pretreated with nicotine or saline during adulthood. 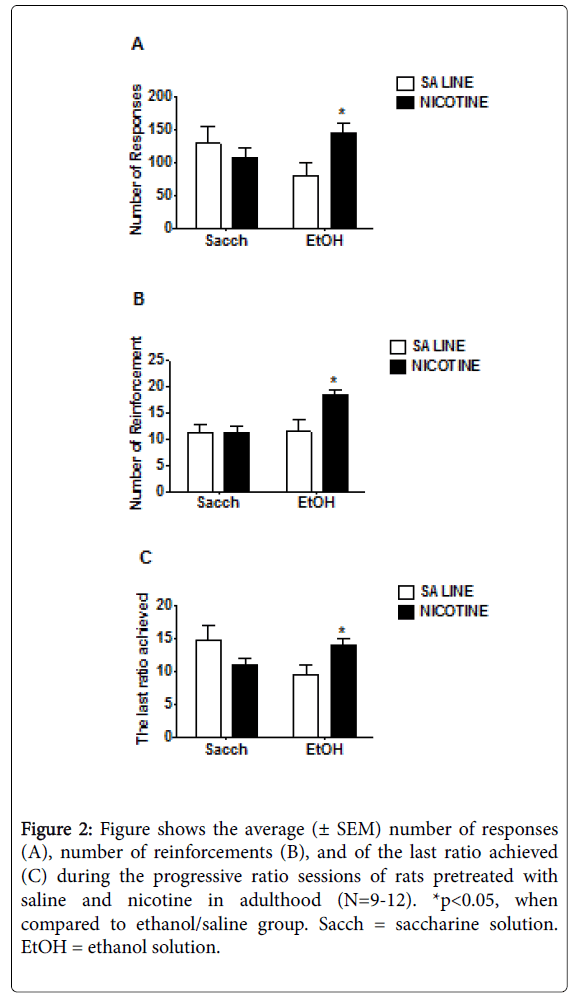 Figure 2: Figure shows the average (± SEM) number of responses (A), number of reinforcements (B), and of the last ratio achieved (C) during the progressive ratio sessions of rats pretreated with saline and nicotine in adulthood (N=9-12). *p<0.05, when compared to ethanol/saline group. Sacch = saccharine solution. EtOH = ethanol solution.

Two-way ANOVA of responses indicated a significant interaction between the two factors [F(3,38)=4.90; p<0.05]. Post-hoc analysis revealed that pre-treatment with nicotine during adulthood increased the number of responses for ethanol, but not saccharine, during operant self-administration.

Two-way ANOVA revealed a main effect of solution on the number of reinforcements [F(1,47)=15.3; p<0.05]. In addition, ANOVA also showed a significant interaction between factors [F(3,47)=11.0; p<0.05]. Post-hoc analysis indicated that the pre-treatment with nicotine during adulthood increased the number of responses for ethanol, but not saccharine, during operant self-administration.

For the final ratio achieved, two-way ANOVA indicated a significant interaction between the two factors [F(3,47)=15.2; p<0.05]. Post-hoc analysis indicated that the pre-treatment with nicotine during the adulthood increased the number of responses for ethanol, but not saccharine, during operant self-administration.

Figure 3A-C depicts the number of responses, reinforcement, and the total ethanol or saccharine intake during the 24-hour long unlimited access session in adult animals pre-treated with nicotine or saline during adolescence. 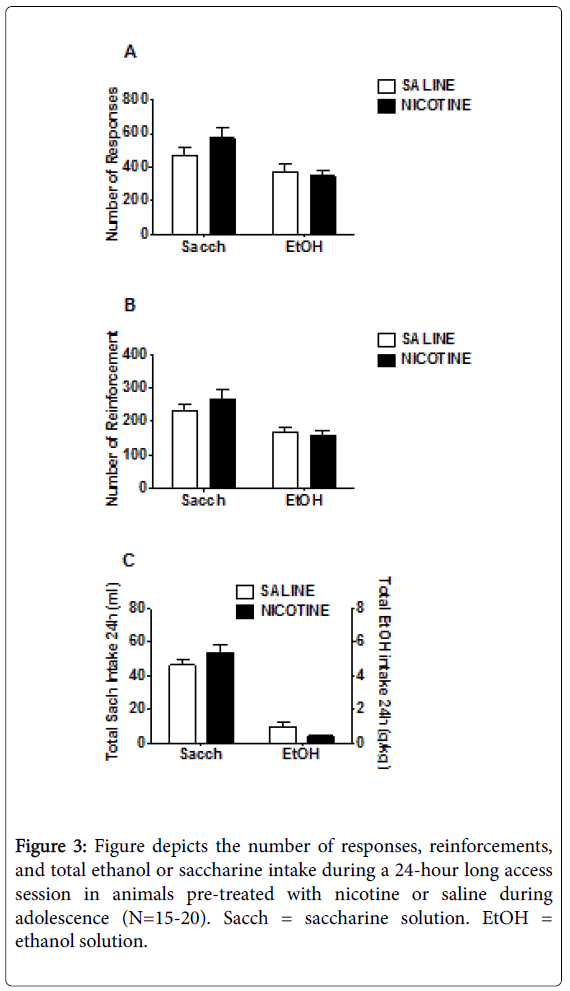 Figure 4A-C depicts the number of responses, reinforcements, and the total ethanol or saccharine intake during the 24-hour long unlimited access session in adult animals pre-treated with nicotine or saline during adulthood. Two-way ANOVA on the number of responses and reinforcements indicated a significant main effect of solution [F(1,47)=29.39; F(1,47)=16.51, p<0.05, respectively]. 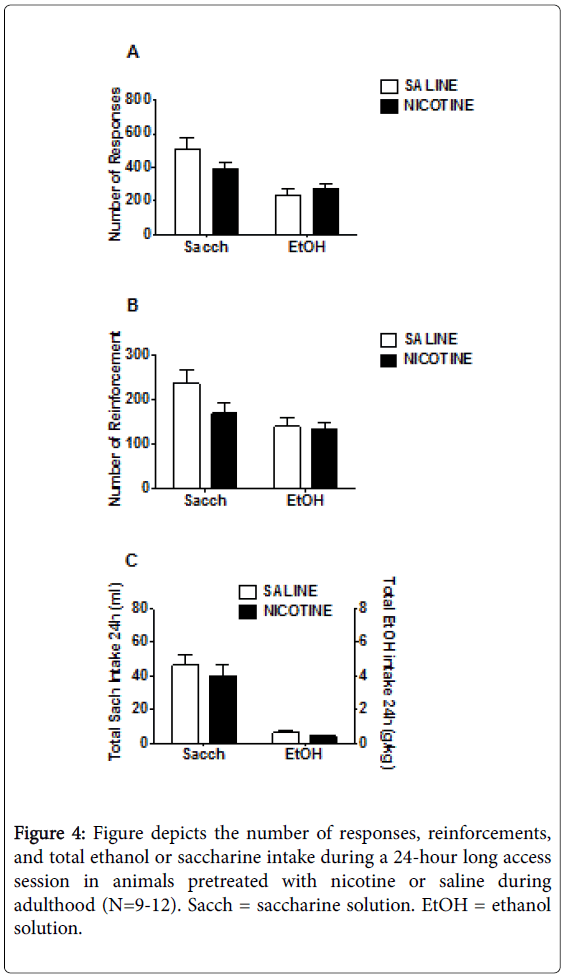 We studied the effects of nicotine pre-treatment during adolescence (PND 28-37) or adulthood (PND 60-69) on a progressive ratio schedule and binge-like consumption in an operant ethanol selfadministration protocol, carried out on PND 75-79 and PND 81-84, respectively. Pre-treatment with nicotine in adult, but not adolescent, rats increased the motivational aspects of alcohol reinforcement in late adulthood as shown by the breaking point results. However, nicotine pre-treatment did not affect the consummatory aspects when animals were allowed to freely intake ethanol for 24 hours.

Nicotine pre-treatment has previously shown to increase alcohol seeking in adult rodents [13,31-34]. In accordance with our results, López-Moreno et al. [35] showed an increase in ethanol selfadministration 14 days after cessation of chronic nicotine administration in adult rats. Moreover, Le and colleagues (2003), showed that nicotine-induced enhancement in ethanol operant self-administration depended on the dose and time after the last nicotine injection. However, nicotine pre-treatment has also been associated with decreased operant self-administration of ethanol [36-38]. The reasons for these different results may be due to the nicotine withdrawal period, schedule of administration, or dose of nicotine.

Although several epidemiological studies have demonstrated that nicotine exposure during adolescence increases alcohol consumption in adulthood [18,19], we found that in adolescent rats, nicotine pretreatment did not have long lasting effects on alcohol seeking behaviours.

In accordance with our finding, Kemppainen and colleagues (2009), using a two-bottle choice paradigm, showed that nicotine pretreatment in adolescent rats (PND 29-45) did not change ethanol intake when the animals were tested in adulthood (PND 93-121), but ethanol intake was increased when they were re-injected with nicotine in adulthood prior to ethanol access. In the same way, Smith et al. [39] showed that chronic continuous exposure to nicotine during adolescence (PND 35-53) did not modify ethanol intake in adulthood (PND 54-75). In contrast, [23] observed that female adolescent mice (PND 35-41) exposed to nicotine showed increased bottle-drinking ethanol consumption on (PND 41-44). The effects of nicotine exposure during adolescence on ethanol intake seem to depend on the treatment age, duration, strain, sex, and nicotine withdrawal period [23,40].

To our knowledge, this is the first study that has demonstrated increased operant saccharine self-administration while assessing the consequences of nicotine pretreatment during adolescence in later life. Since changes were observed in the motivation for ethanol seeking in adult rats pretreated with nicotine during adolescence, we can speculate that nicotine causes enduring plastic changes in specific pathways associated with natural reinforcement.

Our finding is in agreement with several adult human and nonhuman studies that showed an increase in consumption of sweettasting and high-calorie foods during nicotine withdrawal [41-45]. However, we did not observe any increase in saccharine intake in adult pre-treated rats. Methodological differences between our result and those cited in the literature may justify the different outcomes. For instance, while in our study the animals were tested after a long nicotine withdrawal period, others tested after a short abstinence period.

It is worth pointing out, that although epidemiological studies have demonstrated that nicotine may act as a "gateway" to subsequent alcohol use and abuse later in life [1,3], it is not clear whether this phenomenon is a consequence of the drug’s effects per se or the involvement of related social aspects [46]. Thus, more studies should be conducted to answer this important question.

In summary, we have contributed more evidence that nicotine pretreatment increases the motivation to consume alcohol in adult rats. However, nicotine exposure during adolescence does not affect alcohol-taking behaviours in later adulthood.

Copyright: © 2017 Bianchi PC, et al. This is an open-access article distributed under the terms of the Creative Commons Attribution License, which permits unrestricted use, distribution, and reproduction in any medium, provided the original author and source are credited.
Top