Cochliobolus sativus, the causal agent of barley spot blotch disease, is able to undergo spontaneous, vegetative cell fusion. In this study, the utility of enzymatic mismatch cleavage for discovery of single-nucleotide variations in Syrian Vegetative Compatibility Groups (VCGs) obtained from pairing complementary nit mutants of C. sativus isolates was investigated for the first time. Gene-specific primers were designed from the whole fungal genome for use in the Ecotilling assays on VCGs isolates. Differences of band patterns among the digested products of different isolates were clearly observed by agarose gel electrophoresis. Interestingly, isolates belonging to the same VCG had some different sets of single nucleotide polymorphisms. Twenty-six putative nucleotide polymorphisms were identified among the C. sativus VCGs. Therefore, the results suggested that this marker type may be informative for confirmation the conventionally determined VCGs by increasing the reliability of heterokaryons group classification.

Spot blotch (SB) of barley (Hordeum vulgare L.) caused by the fungus Cochliobolus sativus (Ito and kuribayashi) Drechs. Ex Dastur (anamorph: Bipolaris sorokiniana (Sacc.) Shoem), is a devastating disease that occurs in major barley-growing regions of the world [1,2]. Studies during the last decade have demonstrated that genetic diversity within C. sativus populations is higher than previously thought, and that limited understanding of the nature of such diversity has hampered the progress of understanding SB development and the efficacy of its management [3,4].

Vegetative compatibility groups (VCGs) assay has been used to measure population diversity of fungi and to enable appropriate identification and characterization of individual isolates. They demonstrate the ability of fungal isolates to undergo heterokaryon formation that reflects phenotypic differences or similarity among individuals representing the population of a species [5].

Genetic studies in C. sativus populations yielded contradictory results but, overall, indicated a lack of clear genetic distinction between its VCGs. However, since this fungus is a haploid, strictly asexually reproducing fungus, hyphal fusion is a prerequisite to genetic exchange among different isolates of the pathogen [6,7]. Therefore, C. sativus isolates from different VCGs are thought to be genetically distinct populations which may vary in a number of ecological, physiological, and virulence traits [7,8].

In previous work [9], we found that Syrian C. sativus population grouped into three major VCGs based on complementation tests with nitrate- nonutilizing (nit) mutants, which are impaired in their ability to utilize nitrate from the growing media [10,11]. However, a little is known about their genetic diversity, and this lack of a clear molecular distinction among these VCGs suggests that some gene flow might occur among them. This poses a risk that new virulence phenotypes may develop in the pathogen population.

Ecotilling, a variant of Tilling (Targeting Induced Local Lesions IN Genomes) method, allows high-throughput analyses of natural genetic diversity in populations [12-14]. In this technique, a single-strand specific endonuclease extracted from celery (CEL I) is used to cleave DNA where there are mismatched bases in the DNA heteroduplexes of PCR products. Cleaved fragments observed by gel electrophoresis indicate the presence of nucleotide variations. Because cleavage reveals only heterozygous polymorphisms, a sample pooling strategy involving at least one reference DNA and one test DNA is commonly employed as a means of uncovering homozygous differences between two samples [15].

The present study was undertaken to discover, validate and to genotype the single nucleotide polymorphisms (SNPs) in C. sativus VCGs using Ecotilling assay for better characterize molecular variability among them.

CELI digestion of the heteroduplexes and agarose gel electrophoresis detection

Celery juice extract (CEL I enzyme) was extracted from celery following the method described by Till et al. [21]. Heteroduplexes (20 μl) formed after PCR amplification, denaturation and annealing, were mixed with 20 μl nuclease mixture, containing 6 μl CJE Buffer (10 mM Hepes, pH 7.5, 10 mM MgSO4, 10 mM KCl, 0.002% Triton X-100, and 0.2 μg/ml BSA); 2.4 μl crude celery juice extract (CJE) preparation [19], and 11.6 μl ultrapure water. The digestion was then performed at 45°C for 45 min followed by incubation on ice to stop the reaction. Subsequently, 4 μl of 10 × gel loading buffer was added to each sample. The digested products were separated on 2% agarose gels with 1 × TAE buffer at 110 V for 50 min, stained in an ethidium bromide buffer (0.5 μg/ml) for 15 min, and then visualized by Gel Doc XR (BioRad Laboratories, Inc.). The experiments were repeated twice and resulted similar results. 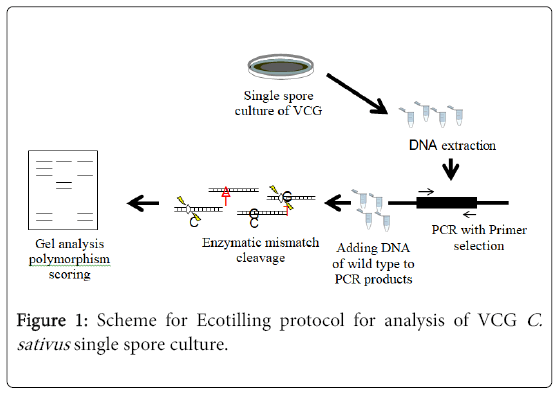 Differences of band patterns among the digested products of different isolates were clearly observed by agarose gel electrophoresis. In our experiments, since C. staivus is a haploid organism, individual isolates did not formed heteroduplexed DNA at the site of a mismatch, therefore, for the success of the method based on using pooling strategy for each VCG consisted of two isolates [13], and each VCG produced unique Ecotilling fingerprints (Figure 2). 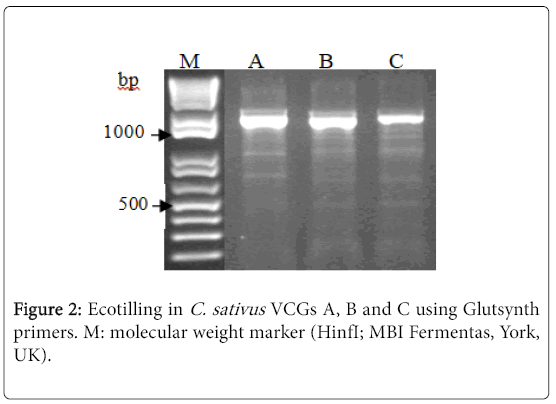 The differences in SNPs detected for isolates within a VCG could be the result of genetic changes in clonal lineages. Leslie [5] noted that isolates from the same VCG are not always members of the same clone. Also, the existence of bridging isolates able to form stable heterokaryons between isolates in different VCGs would eventually facilitate some gene flow between them [5]. Therefore, the evolutionary potential within C. sativus may be intimately related to VCGs [3]. This is relevant to disease control in terms of potential for emergence of new virulence or pathogenicity traits in natural populations of C. sativus . Additionally, by comparing with our previous effort to characterize C. sativus populations collected from different locations in Syria [3], using RAPD and ITS-RFLP markers, the present results suggest that isolates assigned to the same fingerprint group using these DNA markers would also belong to the same VCG.

On the other hand, detecting polymorphisms among C. sativus VCGs are not surprising given the scale of this study and what is known about their different origin over several years [23]. The VCGs isolates tested here were first selected based on morphological and physiological criteria [3,24], and so a high degree of variation may be expected. On the other hand, studying the different VCGs of C. sativus confirms that this is an attractive model organism for both phenotype and nucleotide sequence. Nucleotide diversity [25,26] and diversity at selected genes in C. sativus [27] were reported.

This work demonstrated the utility of enzymatic mismatch cleavage for Ecotilling in VCGs of the haploid organism. The assay was able to successfully distinguish C. sativus isolates representing three Syrian major VCGs. Interestingly, isolates belonging to the same VCG had some different sets of single nucleotide polymorphisms. The data provide an independent confirmation of the genetic structure and diversity of C. sativus populations where all the isolates were initially grouped by VCG analysis [3]. It is now possible to more accurately predict that C. sativus isolates belonging to the same Ecotilling profile are also vegetatively compatible. However, even though this study was carried with a limited number of isolates, these results suggest that the conventional VCG assay together with Ecotilling can give a reliable measure for studying heterokaryons formation in fungi. Moreover, this method compares favorably to the most common alternative–full sequencing, since Ecotilling greatly reduces the number of sequences that needs to be determined and is several fold cheap than full sequencing [19].

The authors would like to thank the Director General of AECS and the Head of molecular biology and biotechnology department for their support. They would also like to thank the Food and Agriculture Organization of the United Nations and the International Atomic Energy Agency through their Joint FAO/IAEA programme of nuclear techniques in food and agriculture for supporting the laboratory experiments. Thanks also extended to Mr. E. Al-Shehadah for his great help for achieving the Geneious analysis.

Copyright: © 2018 Jawhar M, et al. This is an open-access article distributed under the terms of the Creative Commons Attribution License, which permits unrestricted use, distribution, and reproduction in any medium, provided the original author and source are credited.
Top