Effectiveness of Intravenous Prophylactic Phenylephrine for the Prevention of Spinal Anaesthesia Induced Hypotension during Caesarean Section. A Prospective Observational Study

Effectiveness of Intravenous Prophylactic Phenylephrine for the Prevention of Spinal Anaesthesia Induced Hypotension during Caesarean Section. A Prospective Observational Study

Spinal anaesthesia is a widely used anaesthetic technique for caesarean as it avoids the risks of general anesthesia related to difficult intubation and aspiration of gastric contents [1-3]. Spinal anesthesia in pregnant women is associated with greater incidence of hypotension (80%) observed in non-pregnant women despite the preloaded or coloaded fluid [4].

Post spinal hypotension remains common despite several measures used to reduce both incidence and severity [5,6] of subarachnoid block and it is decrement of systemic blood pressure due to systemic vasodilation secondary to sympathetic blockade by intrathecal administration of local anaesthetics. Hypotension can be defined as reduction of blood pressure by 20% from base line or systolic blood pressure 7-9]. A reduction in systemic vascular resistance as a consequence of sympathetic blockade, extensive neural blockade because of a contracted subarachnoid space, higher level of sympathetic block and aorthocaval compression by gravid uterus, as well as to the already low decreased systemic vascular resistance associated with pregnancy [10,11].

The effect of spinal anesthesia on fetal heart rate is due to maternal hypotension and subsequent fetal hypoxia. Maternal hypotension of 80 mmHg for five min almost always results in hypoxic fetal bradycardia [12,13]. The severity of post spinal hypotension will be more aggravated and ended up with many detrimental clinical effects [14-18]. Various pharmacologic and non pharmacologic [[19,20] methods have been used to prevent, treat and decrease adverse effects of post spinal anaesthesia hypotension [20-22]. However, non-pharmacologic mechanisms are associated with high incidence of high spinal block and unilateral block especially when hyperbaric local anaesthetics are used [23]. As pharmacologic methods, are associated with hemodynamic instability (refractive hypertension, bradycardia, and tachycardia) and fetal acid base disturbance and uterine vasoconstriction [24-26], other modalities such as fluid administration, left lateral position and trendelenburg positions should be considered [27,28].

Although, non-pharmacologic methods are alternatives, hypotension during spinal anaesthesia common and almost all parturients required vasopressor for intervention [37]. Phenylephrine is a selective α1-adrenergic receptor agonist which has been used to increase blood pressure. Because of its sympathomimetic effect without beta-adrenergic activity, it does not increase contractility force and output of cardiac muscle; it may increase BP resulting in a slow heart rate through stimulation of vascular baroreceptors as reflex bradycardia is side effect of its IV administration [38,39]. Phenylephrine used as alternative vasopressor for treatment and prevention of post spinal hypotension. Some studies showed different results to choose the best drug during cesarean delivery under spinal anesthesia but associated with some side effects such as hypertension and bradycardia [40].

Institutional based prospective observational study was conducted in University of Gondar Hospital from May 1-30, 2017. The University of Gondar Hospital is one of the largest referral and teaching hospitals in the Amhara region and serving around 5 million people. Postspinal hypotension is being routinely managed by fluid and available vasoconstrictors (phenylephrine, adrenaline) as prophylaxis or treatment by anaesthetists during operation.

All mothers who gave birth by caesarean section in University of Gondar Hospital during the study period.

All ASAI and ASAII parturients who underwent cesarean section under spinal anaesthesia (parturients who took phenylephrine prophylaxis or who didn’t take any prophylactic vasoconstrictor). Patient refusal, massive obstetric hemorrhage, complicated surgery (such as hysterectomy), myocardial infarction of <3 months, parturients who have allergic history for phenylephrine, failed spinal or total spinal converted to general anesthesia were excluded from the study.

Variables of the study

The incidence of hypotension, maternal hemodynamic change (HR and BP) at different time intervals in the intraoperative and postoperative period (0-1 h), Apgar score at 1 and 5th min were compared among participants with and without prophylactic phenylephrine.

Tachycardia: Increment of heart rate >100 bpm by whatever the cause [46].

Hypertension: Elevation of blood pressure more than 140/90 mmHg and it could sometimes be resistant for treatment [47].

Nausea and vomiting: Sense of discomfort, hyper salivation or vomiting ingested matter or any content after any surgical or anesthetic intervention [48].

Effectiveness of phenylephrine: It is the ability of the drug to decrease incidence of hypotension and it could be assessed by blood pressure change after it has given.

Safety of phenylephrine: It is assessed by change in heart rate (bradycardia), blood pressure (hypertension) and neonatal outcome (Apgar) score.

All consecutive laboring mothers (prospectively) who delivered by cesarean section under spinal anaesthesia during the study period were included in the study.

Ethical approval was obtained from University of Gondar, School of Medicine ethical review board (Ref.No. SOM /1004/4/2017). Written informed consent was obtained from study participants before commencing the study. Recently, phenylephrine is introduced in our hospital for the prevention of spinal anaesthesia induced hypotension with different dose regimens (50 μgm and 100 μgm). Parturients who underwent caesarean section were classified in to three groups: phenylephrine 50 μgm, phenylephrine 100 μgm and none prophylaxis group based on their exposure (treatment by the responsible anaesthetists). Phenylephrine IV bolus was given immediately after spinal anaesthesia (after a patient is positioned). We investigators did not involve in the perioperative management of patients). Pulse rate, non-invasive blood pressure (NIBP), peripheral oxygen saturation (SPO2) were measured before, immediately after spinal anaesthesia, every 2 min intra operatively till delivery of the baby and then every 5 min after delivery for 20 min and every 10 min for 1 h in postoperative period. Anaesthetic management including prophylactic phenylephrine was up to the choice of the responsible anaesthetists. The data collector observed the responsible anaesthetist whether he or she gave vasoconstrictors during administration of spinal anaesthesia. Mothers who took bolus dose of phenylephrine and who were not taking drug were identified by the data collector (Figure 1). 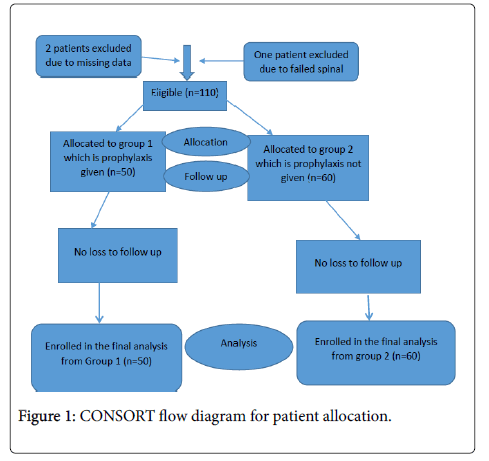 The data collector continuously observed the hemodynamic variables of parturients, intraoperative anaesthetic and surgical interventions, and Apgar score during the study period without having place in intervention in whatever the case. Level of sensory block was assessed and recorded by pinprick after completion of spinal anaesthesia. Motor block was assessed and recorded by Bromage motor scale. Total amount of intraoperative fluid, estimated blood loss, doses of drugs for treatment of hypotension and duration of surgery were recorded by one of the data collector.

After completion of data collection, the data were checked for errors and coded. The coded data were entered to SPSS version 20.0 statistical package and analysis was performed. Numerical variables were analyzed using independent student t-test and Man-Whitney U test as appropriate. Incidence of hypotension was compared using chi-square test. P value <0.05 was considered statistically significant. Numerical data were presented as mean ± Standard deviation or median (IQR) and categorical data as proportions (%). Baseline characteristics and risk level were checked for similarity in the groups.

Variables related to anaesthesia and surgery

The incidence of hypotension 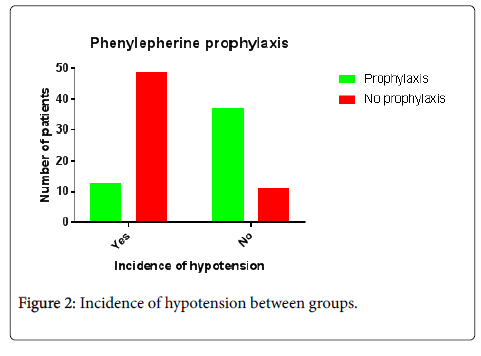 Figure 2: Incidence of hypotension between groups.

Table 3: Comparison of level of block (sensory and motor) between groups, incidence of hypotension between two prophylactic phenylephrine doses.

Due to this, the dose of drugs for treatment of hypotension (phenylephrine for phenylephrine group and adrenaline for non-phenylephrine group) and amount of fluid given intraoperatively were more needed for those participants with no prophylactic drug as it is statistically significant with p-value of 0.005 and <0.001 respectively (Table 3).

Blood pressure (systolic and diastolic), pulse rate and saturation were observed every 2 min of time interval starting from immediate time after SA till delivery, at delivery and every 5 min after delivery for 20 min. Systolic and diastolic blood pressure immediately after SA till delivery of the baby were significantly lower in those without prophylactic drug (P<0.001) all the time (Table 4). In addition, the blood pressure (systolic and diastolic) was significantly lower during the intraoperative period including the whole time after delivery despite different treatment modalities as it was shown by p-value of less than 0.05. Even though the blood pressure was not expected to be lower at immediate period after SA, it could be due to the autonomic effect of SA anaesthesia which usually starts at this time. However, pulse and were not significantly different throughout intraoperative period between the groups (Table 4).

Table 4: Comparison of intraoperative SBP, DBP and heart rate before and after delivery.

Neonatal outcome was comparable between groups as it is computed by Apgar score of 1st and 5th min which were not significantly different. However, the overall number of hypotension episodes and number of treatments (rescue) given for hypotension were significantly higher in those who didn’t take prophylactic phenylephrine (Table 5).

Table 5: Comparison of outcome variables related to neonatal outcome, number of hypotension episodes and number of treatments for hypotension.

Hypotension is the most common complication of spinal anaesthesia. The incidence of spinal anesthesia induced hypotension is reported to be as high as 80% [4]. It can have detrimental effects on both the mother and fetus. The adverse effects include decrease in uteroplacental blood flow, impaired fetal oxygenation with distress, fetal acidosis and maternal symptoms of low cardiac output such as nausea, vomiting, dizziness, and decreased consciousness to the mother [4].

In this study, the incidence of hypotension was high (81.6%) in those parturients who did not take prophylactic phenylephrine than those who took prophylactic phenylephrine (26%). The intraoperative blood pressure (systolic and diastolic) stayed lower significantly all intraoperative period in those with no prophylactic phenylephrine, whereas, there was no significant difference in pulse rate and saturation in the intraoperative and postoperative period between the groups. Even though the sensory and motor onset of SA starts around after 5 min, its autonomic effect is expected to start immediately after SA which is evidenced by significant hypotension in those without prophylaxis at earlier times after spinal anaesthetic injection. Moreover, the blood pressure was significantly different in some time intervals between groups, despite different hypotension management methods used. The neonatal outcome was comparable between groups as it was evidenced by Apgar score of 1st and 5th min.

In our study, the incidence of hypotension without prophylactic phenylephrine was high (81.6% vs. 26%) compared with none of the treatment group. This finding was low compared with a study conducted by Ayorinde B et al. where the incidence of hypotension in phenylephrine group was 33% whereas it was 70% in placebo group. This discrepancy could be due to the route of administration in which they used intramuscular phenylephrine unlike our study where IV administration used [49].

Hypotension remains a common and serious complications following spinal anesthesia despite different preventive measures have been applied such as preloading, positioning and left uterine displacement. The result of this study shows that the intraoperative systolic and diastolic blood pressures were significantly lower in patients with no prophylactic phenylephrine compare to phenylephrine prophylactic group. Our finding was in accordance with a study conducted by Farnaz Moslemi et al. in Iran, in which the incidence of hypotension despite prophylactic phenylephrine was 28.5%. However, a review study by Habib et al. on efficacy of phenylephrine infusion revealed that, the incidence of hypotension after prophylaxis was 13-23% and the intraoperative blood pressure was well maintained [1,50]. This could be due to weight adjusted continuous infusion with no significant fluctuation of blood pressure, which is impossible in single bolus unless rescue treatment doses given.

Limitation and Strength of the Study

This is not a randomized control trial study as our university ethical board prohibited RCT by graduate students. Inter-anaesthetist practice variation such as preoperative optimization, intraoperative management including speed of injection of local anaesthetics, level of the block, timing of administration of phenylephrine prophylaxis, the dose of vasoconstrictor drugs etc, could possibly affect the outcome of the study.

This is the first study in our hospital which could enhance the use of prophylactic phenylephrine for the prevention of spinal anaesthesia induced hypotension for parturients undergoing caesarean section.

We are grateful to the University of Gondar for financial support (for MSc thesis in Advanced Clinical Anaesthesia).

Copyright: © 2017 Agegnehu AF, et al. This is an open-access article distributed under the terms of the Creative Commons Attribution License, which permits unrestricted use, distribution, and reproduction in any medium, provided the original author and source are credited.
Top
betsoobetasus girisdumanbetkralbet supertotobet girisbetmatik giris adresimariobetbetturkey giris bahiscom girisasyabahis girisasyabahis giris