Effect of Metal on Soil Mycobiota Effect of Metal on Soil Mycobiota

Present investigation were conducted to evaluate the influence of chromium contamination on soil mycobiota and to obtain some Cr resistant strains for the management of Cr contaminated soils and of the effluents carrying the metal. Each pot was treated with different concentrations (50 ppm, 100 ppm, 250 ppm and 500 ppm) of chromium sulphate solution separately in triplicates. Three pots served as control with each concentration. The soil samples collected aseptically from control and treated pots after 30, 60 and 90 days were analyzed for mycobiota using serial dilution method. Overall dominance of Aspergillus sp. was observed amongst the 43 species of fungi isolated. A. fumigatus was most tolerant to Cr probably due to binding of Cr by certain groups on the fungus as revealed by FT-IR spectroscopy. Chromium sulphate adversely affected the mycobiota qualitatively as well as quantitatively. Soil fungal diversity is also adversely affected by Cr contamination. A. fumigatus biomass with Cr binding functional groups might be utilized for in-situ management of Cr in soils and in biosorption based effluent treatment systems.

Soil is a vital part of the natural environment and it is as important as plants, animals, landforms, rocks and rivers. This influences the distribution of different plant species and gives a habitat for a wide range of organisms. Soil pollution is the reduction in the productivity of soil because of soil pollutants and these pollutants gave an adverse effect on physical, chemical and biological properties of soil and reduce its productivity. Many factors such as pesticides, fertilizers, organic manure chemicals, radioactive wastes, plastics, paper, bottles all contributes towards soil pollutions. These pollutants may reach the soil through water or directly and from their they reach the plants and then in to the grazing animals and ultimately to the humans. These pollutants accumulate in the soil and degrade very slowly and have a very deleterious effect on plant as well as mycoflora in soil environment [1-5].

Recently, industrial activity growth and increasing water usage worldwide have led to the release of various pollutants in to environment. Soil may become contaminated with heavy metals from a variety of anthropogenic sources as well as those which are irrigated by untreated waste water. The use of contaminated water for irrigation, can contributes to the accumulation of chemical and biological pol, l and mutants in soil which alter the physicochemical and biological properties of soils [6-9].

Microorganisms present in the soil play a crucial role in soil fertility and primary production through organic matter decomposition and nutrient cycling. Some microorganisms such as fungi and bacteria comprise the main components of soil microbial biomass [10-13]. Many studies indicate that, heavy metals accumulation in soils gives toxic effects on soil mycoflora, population size and activities of the soil microbial communities [14-20].

The current observation was conducted with an aim to isolate those fungal species from soil which are able to surviving heavy metal chromium pollution and to obtain Cr resistant fungal strains which might facilitate the management of metal level in soil and effluents.

Forty eight pots of 150 ml capacity, each filled with 100 gm soil sample were taken for the present investigation. Twelve pots from these forty eight pots were treated with 25 ml of distilled water at time period of seven days for a total period of twelve weeks. These twelve pots served as control. The remaining thirty six pots were treated with different concentration of chromium metal solution (as CrSO4). Nine pots were taken for each concentration i.e. (50 ppm, 100 ppm, 250 ppm and 500 ppm) of chromium solution.

After 30 days, soil from the four pots of control was mixed completely to obtain a composite sample. Similarly four different composite samples were prepared from the soil treated with chromium metal with each concentration. Each treated composite soil sample obtained was analyzed for mycobiota, using dilution plate method. 20 gm of soil sample from the composite sample were transferred to 200 ml of sterilized distilled water and stirred it well. 10 ml of this soil suspension were instantly transferred to a conical flask containing 90 ml of sterilized distilled water. From this soil suspension 1:100, 1:1000, 1:10,000 and 1:100,000 were prepared. From the suspension of each dilution 1 ml aliquots were transferred to each of a set of three petri plates which were already pored with 20 ml of cooled and sterilized potato dextrose agar medium, amended with 30 ppm streptomycin and 30 ppm Rose Bengal (per liter of medium). After inoculation, the petri plates were incubated at 260°C ± 2 for 3 to 4 days. The total numbers of colonies of individual fungal species growing in each petri plates were recorded at a regular time interval. Obtained fungal strains were identified with the help of standard keys. The fungal strains were transferred to the petri plates containing fresh sterilized medium for the preparation of axenic culture. Different composite samples were obtained from the chromium treated soil with different concentration were processed similarly and the procedure was repeated after 60 and 90 days.

Aspergillus fumigatus fresenius being the dominating fungal species that could withstand the Cr toxicity was subjected to FTIR spectroscopic analysis. For this the mycomass of A. fumigatus was prepared by inoculating 6 flasks each containing 100 ml MGYP medium (Malt, 3 g, Glucose 10 g, Yeast extract 3 g and Peptone 5 g; made upto 1 liter with distilled water) along with 10 ml of spore suspension of A. fumigatus. After 6-8 days of incubation at 26 ± 10 C, the mycomass of A. fumigatus was harvested and dried in an oven at 600 C for 48 hours. Two mg of the powder was mixed with 98 mg of dry powdered KBr. The mixture was use to prepare pellets by applying pressure of 10,000 to 15000 psi using PG-Hydraulic Press. The IR spectrum was recorded on IR-affinity-1, Shimadzu spectrophotometer high resolution (≤ 0.001/cm).

A total of forty-three fungal species were isolated from the control as well as those treated with heavy metal chromium using serial dilution method. Out of these forty-three fungal species two species belong to Zygomycota (i.e. Rhizopus sp. and Rhizomucormiehei) while the remaining forty-one fungal sp. were anamorphic fungi. Nine fungal species were belonging to the genus Aspergillus. The isolates of Aspergilli were largely dominated to the culture Plates. Aspergillus fumigates is the more dominant species that could tolerate chromium metal at 1000 ppm concentration even at 90 days of treatment. This may be due to the capacity of Aspergillus sp. to produce toxins that may prevent the growth of other fungal species. The Aspergilli were represented by nine species while the Chaetomium were represented only four species and the number of isolates of Aspergilli were also dominated to the culture Plates. It is widely accepted that Aspergilli are more plentiful in the warmer regions of the world then other species and some finding represent that the ability of A. fumigates of surviving in very different environments, such as those with temperature up to 48°C-60°C.

The result of the present observation is in agreement with the above findings. The numbers of fungal species were reduced with increase in metal concentration after 30 days of treatment. The number of isolates gradually increased in control soil sample after thirty days while the number of isolates in a metal treated soil samples reduced till 60 days of treatment but number of isolates became increased during the 90 days of treatment. In the present observation an overall inhibitory effect of chromium metal was observed on soil mycoflora i.e. diversity of mycoflora decreased with increasing concentration of metal pollutants with few exceptions. This is further approved with the help of diversity indices (D and 1-D) (Table 1).

Table 1: Qualitative and quantitative distribution of mycobiota in soils−control as well as treated with 50 ppm, 100 ppm, 250 ppm and 500 ppm concentrations of Chromium sulphate over a period of 30, 60 and 90 days (as obtained by dilution plate method). 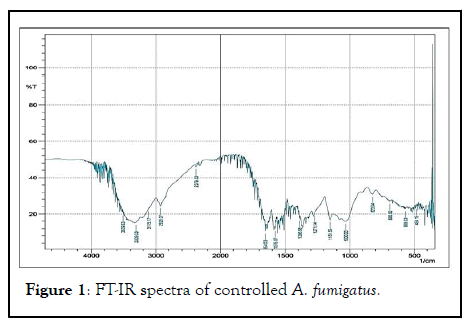 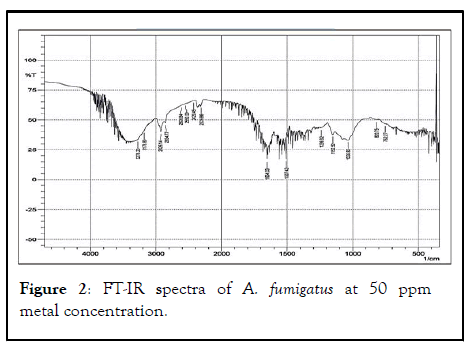 Figure 2: FT-IR spectra of A. fumigatus at 50 ppm metal concentration. 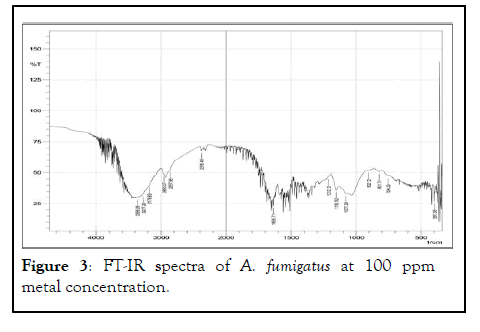 Figure 3: FT-IR spectra of A. fumigatus at 100 ppm metal concentration. 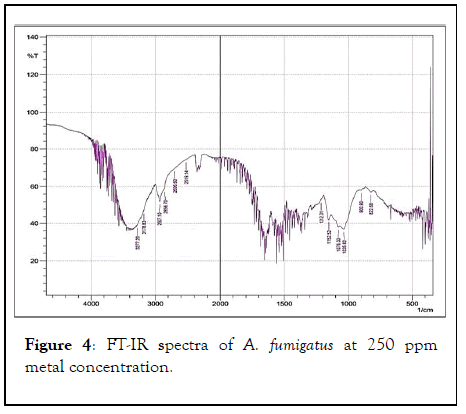 Figure 4: FT-IR spectra of A. fumigatus at 250 ppm metal concentration. 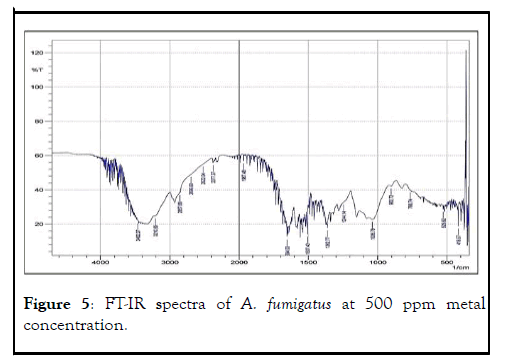 Figure 5: FT-IR spectra of A. fumigatus at 500 ppm metal concentration.