Effect of Blood Transfusion on Supportive Therapy of Elderly Patients at Kumamoto, Japan as Compared with Khon Kaen, Thailand

Effect of Blood Transfusion on Supportive Therapy of Elderly Patients at Kumamoto, Japan as Compared with Khon Kaen, Thailand

After rising to the highest level of life expectancy ever in the early 21st century, Japan is expected to become an aged society the links of which no other country in the world has experienced. The aging rate in Kumamoto exceeds the national average and is one of the top ranking long living societies in Japan. The old population of Khon Kaen is also the second-largest of aging population in Thailand. More than 2,500 patients with malignant neoplasm were treated every year at National Hospital Organization Kumamoto Medical Center (KMC) in Japan as well as at Khon Kaen Regional Hospital (KKH) in Thailand. Especially KMC had so many patients older and equal 60 years accounted for 70% of those patients. Patients with malignant tumors in KMC were in the 8th decade (29.6% in 2011), while those in KKH were in the 6th decade (26.1% in 2011). In addition, the number of patients with cancer was increasing at KKH, while it was stable at KMC. Transfusion products, particularly red blood cell supply increased, which correspond to the increasing ageing population at Kumamoto, Japan. KKH is one of 25 regional blood centers in Thailand and blood cell supply increased year by year, suggesting not only developing system of blood bank but also increasing elderly patients who need blood transfusion for their therapy. Now under the limits of medical resources, we are to provide the best healthcare (prevention of diseases) in the extent permitted by the country's economic situation.

After rising to the highest level of life expectancy ever in the early 21st century, Japan is expected to become an aged society the links of which no other country in the world has experienced. In 2013, the total population of Japan was 126.98 million people and percentage of the population over 65 (Population aging rate) was almost 30%. As the total population decreases, the aging of society will continue to accelerate.

After World War II, both Japanese life expectancy and per capita Gross Domestic Product increased dramatically [1]. During that time, adult T-cell leukemia (ATL) was discovered as the first disease caused by human retrovirus, human T lymphotropic virus type 1 (HTLV-1), in Japan [2]. This is a unique disease to develop more than 50 years after HTLV-1 infection [3]. This is the reason why ATL is little known even in the other HTLV-1 endemic area such as Africa where the life expectancy is lower than Japan. Not only ATL but also other cancers are the problem of requiring the control and measures in elderly people in Japan. From the report of Ministry of Health, Labour and Welfare in Japan, malignant neoplasm ranks first in the causes of deaths since 1981 [4].

Kumamoto Prefecture is located in the center of Kyushu Island in the southwest part of Japan [5]. Kyushu has an area of 42,000km2, roughly the same as the Netherlands, with a population of approximately 13 million. Kumamoto itself has an area of 7,400km2, with a population of approximately 1.8 million. Kumamoto City, the capital city of Kumamoto Prefecture, has a population of over 730,000. National Hospital Organization Kumamoto Medical Center (KMC) is the only hospital positioning as International Medical Cooperation Hub Hospital in Japan with 32 clinical departments and 550 beds and also serves as a referral hospital of geriatric medicine [6]. In order to better meet the healthcare needs of patients and families, we eagerly and actively strive for new methods, such as critical pathways and highly advanced treatment technologies such as bone marrow transplantation and angiogenesis. Khon Kaen Province is the second-largest of the northeast provinces in Thailand, with a population of approximately 1.7 million. The older population is 211,882 (2009), which is the second-largest of aging population in Thailand. Khon Kaen is a regional center for education, financial institutions, government offices and transportation. Khon Kaen is also an industrial center, especially for the region’s silk trade, as well as an agricultural hub. Khon Kaen Regional Hospital (KKH) was established in 1947 and today has nearly 1,000 beds. The hospital offers a full range of care in the following fields: emergency care, cardiac, cancer, physical therapy, pediatrics, ophthalmology, psychiatry, dental, pathology, pharmacology, rehabilitation, surgery, obstetrics-gynecology, alternative medicines, etc. The population of Kumamoto prefecture is approximately 1.8 million (1.7 million in Khon Kaen province) and signs of an aging society in which 26.5% of the prefectural population are elderly have appeared. The aging rate in Kumamoto exceeds the national average and is one of the top ranking long living societies in Japan.

It’ll be essential to cooperate with foreigners during a rise in the percentage of the aged population now, because of this unsustainable national medical emergency situation in Japan. In November 2009, we made a contract for our sister hospitals between KMC and KKH, Khon Kaen, Thailand. And we began to share our knowledge and experience with staff in kinds of medical fields each other to promote the mutually beneficial international cooperation initiatives, especially in the elderly medical care field. In fact, the rise in elderly people percentage advanced in Japan and Thailand has been chasing after Japan for 25 years [7]. For the purpose of this study, we tried to compare the medical facts between our aging countries and pave the way for elderly medical care in Thailand in the future to reveal. 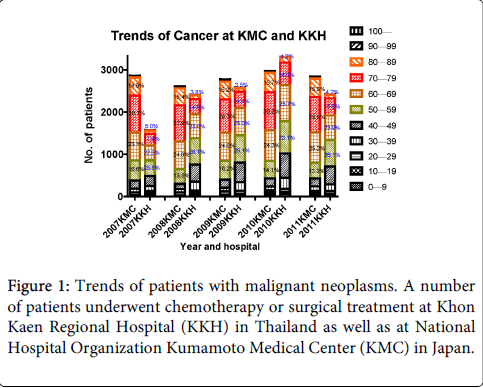 The number of patients with hematological malignancies at KMC was two times larger than that of KKH (Figure 2). In fact, the Hematology Division is the most active department at KMC and only KMC had the institute for hematopoietic stem cell transplantation in Kumamoto Prefecture. Although the pediatric patients were excluded of their number at KMC, patients more than 60 years accounted for 65% of those patients. Transfusion products, particularly red blood cell supply increased as shown in Figure 3. Elderly patients required blood transfusion (Figure 3A) because of a high incidence of hematological disease (Figure 3B) as well as a high frequency of emergency care (Figure 3C) at KMC. These results correspond to the increasing ageing population at Kumamoto, Japan. 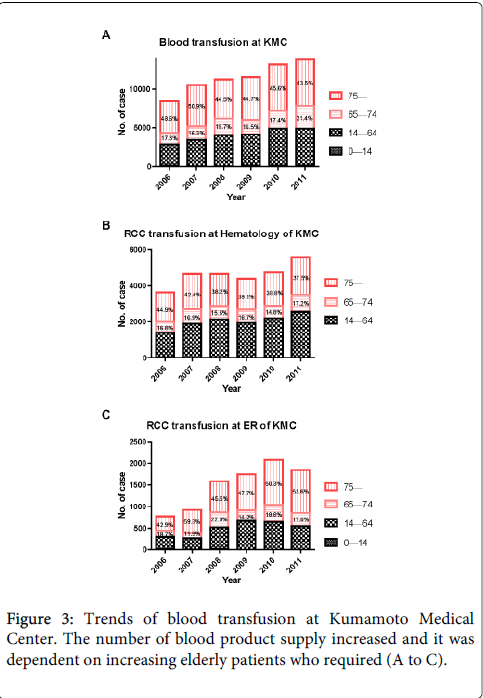 Figure 3: Trends of blood transfusion at Kumamoto Medical Center. The number of blood product supply increased and it was dependent on increasing elderly patients who required (A to C). 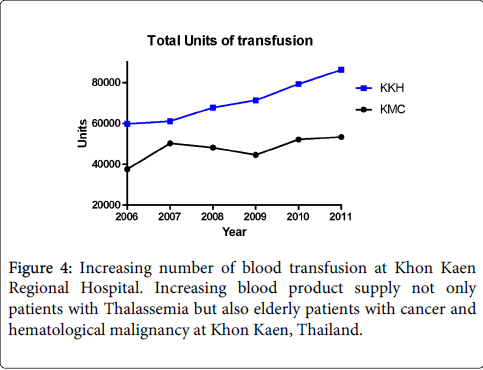 Around the world, the expansion in human numbers is obvious and the increase in the number of older persons results from reduced death rates in all age groups. In fact, there are extensive implications for an increased cancer burden among elder Japanese, especially elderly patients at KMC, Kumamoto, Japan. In KKH at Khon Kaen, Thailand, the number of elderly patients was increasing and blood transfusion became the essential supporting therapy as well as Japan.

Aging affects hematopoiesis associated decline in immune function, impairing responses to pathogens and reducing vaccination efficacy. Those changes cause increased inflammation and decreased immune surveillance and implicate carcinogenesis [8]. The goal of cancer treatment is first to eradicate the cancer. Surgery is the most effective means of treating cancer even in elderly patients who can tolerate the operation. In fact, our surgeon performs tumor rejection even in 100-year-old patient with a good daily activity. Regarding hematological tumor, chemotherapy is systemic and the most effective treatment for malignancies of hematology, however, it is also associated with severe side effects including bone marrow suppression. Blood transfusions such as red blood cells and platelets are required at nadir phase. Our results showed that life of elderly patients could maintain using blood transfusion. Although Thailand and Japan have located at different developing stages, both countries have a similar culture associated with Asian region based on Buddhism and almost same level of medical knowledge and procedure for patients.

On the other hand, erythropoietin (EPO) was purified from urine of patients with aplastic anemia in Kumamoto, Japan [9]. Although EPO is suitable to use only renal anemia treatment in Japan, management of cancer-related anemia with EPO has been discussed in other countries including Thailand [10-12]. Treatment with EPO has been shown to reduce transfusion rate in cancer patients. However it remains uncertain to use EPO for those patients because erythropoietin receptor is expressed not only on progenitor cells of erythroblast but also the other cells. Furthermore, it may induce a sufficient degree of cell proliferation to allow accumulation of mutations necessary for leukemogenesis [13].

In Japan, low birth rate will affect the blood transfusion system in the immediate future. In fact, number of blood donation by age group changed dramatically within 10 years between 2003 and 2012 [14]. The number in the 3rd decade decreased from 1,480,855 (26.3%) to 1,000,086 (19.0%) and the number in the 4th decade decreased from 1,470,298 (26.2%) to 1,243,040 (23.6%). Therefore, we must consider the alternative way to make the blood products, for example, using induced pluripotent stem (iPS) cell [15,16]. Patients will be able to get their own blood cells from mature normal cells without side effects including transfusion transmitted diseases. Furthermore, Thalassemia is one of the serious public health problems in Thailand and affecting health-related quality life in Thai children as well as their parents [17]. The patients require frequent visit to the hospital for the regular blood transfusion. It is also possible that iPS cells provide the complete correction of homozygous a-thalassemia [18].

The main limitation of this study is the international comparison between single local national hospitals in different country. For example, the supply system of blood products is different. Japan Red Cross Blood Centers organizes Blood program in Japan, while not only National Blood Centre but also Regional Blood Centre perform from blood donation to transfusion in Thailand like a Japan 40 years ago. Regarding transfusion policy, there is world-wide standard [19], and Khon Kaen Regional Blood Centers make effort to provide adequate blood product supply and to establish a regional network. Although the current situations have some differences, continuous study is needed to confirm our results in the future.

In conclusion, cancer treatment and the supportive therapy using blood transfusion are one of the issues in aging society of Asia. For the safety measures and supply of blood products, the first control measures against transfusion transmitted infections worked well and followed by the developing system and law in Japan. However, under the current limits of medical resources, we are to provide the best healthcare (prevention of diseases) in the extent permitted by the country's economic situation. Because Thailand will face a critical situation in which the rate of aging is increasing rapidly, it’s necessary for Thailand to prepare for the super-aging population in the near future.

Ratiorn Pornkuna received research funding from National Hospital Organization Kumamoto Medical Center. The other authors have no conflict of interests in this work.

Copyright: © 2014 Pornkuna R, et al. This is an open-access article distributed under the terms of the Creative Commons Attribution License, which permits unrestricted use, distribution, and reproduction in any medium, provided the original author and source are credited.