Monoclonal Gammopathies are a group of disorders that show high levels of a monoclonal immunoglobulin (Mprotein). It is produced by a clone of abnormally proliferating B-lymphocytes and/or plasma cells. This M-protein can be evaluated by Serum or Urine Protein Electrophoresis (SPEP), which yields a single distinct band (M-band), usually in the gamma globulin region. Rarely two separate M-bands appear simultaneously at different positions during SPEP–A condition known as Biclonal Gammopathy, as a result of clonal expansion of two dissimilar neoplastic cell lines. Here, we report an atypical case of plasma cell dyscrasias where two distinct bands were found in gamma region during SPEP depicting biclonalgammopathy in gamma region. This peculiar presentation of double M bands in gamma region was double gammopathy without any underlying plasma cell or Lymphoproliferative disorder. This unusual case of double Gammopathy is referred to as “Biclonal Gammopathy” with undetermined significance. To the best of our knowledge this is the first case of double Gammopathy to be reported from Pakistan.

Monoclonal Gammopathy (MG) is the presence of a Monoclonal protein (M-protein) in serum and/or urine. This occurs as a result of increased production of monoclonal serum immunoglobulin (Ig) of a single isotype. This overproduction is caused by an abnormal clone of proliferating B-lymphocytes and/or plasma cells [1,2]. It is associated mostly with plasma cell dyscrasias such as Monoclonal Gammopathy of Undetermined Significance (MGUS), plasma cell myeloma, or Waldenström’s macroglobulinemia. However, monoclonal proteins may also occur in primary amyloidosis, cryoglobulinemia, lymphoproliferative disorders, solitary plasmacytoma, and certain infections such as Hepatitis C (HCV) etc. [3]

Serum or Urine Protein Electrophoresis (SPEP and UPEP, respectively) and immunofixation are the methods of choice for the detection of Monoclonal (M) proteins. M proteins on SPEP and UPEP appear as a single intense, discrete band on agarose gel and a sharp peak in the densitometer tracing. This band/peak can be noted in the gamma, beta-gamma, or beta-region depending on the type of monoclonal Igs being produced and secreted [3-5].

After an M protein is identified on electrophoresis, immunofixation is necessary for confirmation and determination of the heavy and light-chain class of the M protein. Immunofixation is more sensitive than electrophoresis and allows detection of smaller amounts of M protein. [4] Further workup like bone marrow examination, flow cytometry, lymph node biopsy, skeletal surveys etc. are also carried out to rule out any underlying disorder.

In very rare cases serum protein electrophoresis shows two distinct M-bands/ paraprotein. This condition is termed as “Double Gammopathy” (DMG). In many instances, the term biclonal gammopathy has also been used for similar condition. [5-7] It is seen in 3%-4% of all cases of gammopathy [6,7] Double Gammopathy are associated with MGUS (where it is appropriately called as BGUS), plasma cell myeloma and other hematological malignancies (leukemias and lymphomas) [6] (Figure 1). 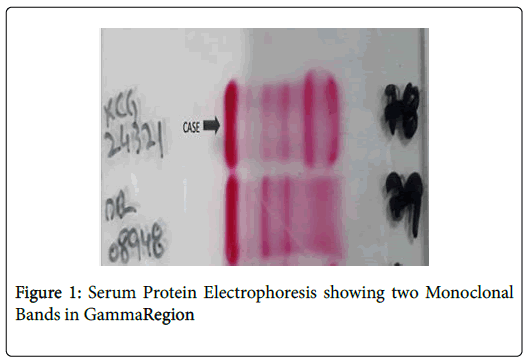 It is important to identify a Double Gammopathy. This can help in evaluating the disease behavior and response to treatment of both the clones during therapy. It may also assist in developing treatment strategies for the associated disease conditions.

66-year-old male patient presented with history of progressive generalized weakness and lethargy for one year. He was vitally stable with marked pallor on examination. He had grade three hemorrhoids. No other significant finding/sign was noted on detailed physical examination. Upon basic tests his CBC showed severe hypochromic microcytic anemia with a hemoglobin of 4 gm/dL. Total leucocyte count and platelets were normal (6.28 × 109/L and 140,000/cm). Peripheral smear morphology showed hypochromia and microcytosis with pencil cells. No abnormal cells were seen. His ESR was 140 mm at the end of first hour. 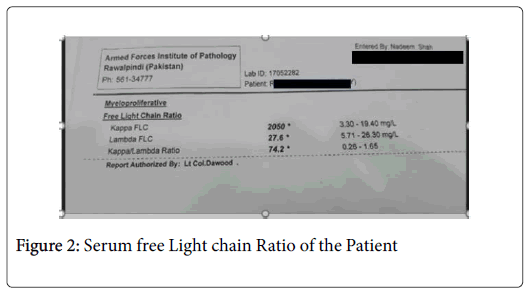 Based on above lab reports and clinical picture of the patient a diagnosis of double Gammopathy with undetermined significance was made.

During his hospital stay the patient was transfused two units of red cell concentrates. Parenteral iron was also given. He was discharged on oral iron therapy. He was suggested to consult surgical department for treatment of hemorrhoids and a quarterly visit to medical OPD regarding BGUS (Figure 3).

About 3-4% of patients with a gammopathy have two monoclonal bands. It is seen mostly in cases of MGUS, followed by multiple myeloma, Waldenstrom’s macroglobulinemia or other malignant lymphoproliferative disorders [6,7].

Our patient showed Double Gammopathy in a case of MGUS which is referred to as Biclonal Gammopathy with undetermined significance. Microcytic hypochromic anemia (Iron deficiency anemia) in our patient is explained as bleeding from grade three hemorrhoids and is unrelated to the disease pathology of plasma cell myeloma [8].

A study by Mullikin et al. [9] revealed that biclonal gammopathies appear to have a similar rate of progression compared to what has been historically described for MGUS and Smoldering myeloma. It raised the possibility of different processes leading to two clones and that they are not necessarily influenced by each other’s presence, thus, behaving independently. Better outcomes were observed in biclonal plasma cell myeloma. Since this is the first case reported in Pakistan, an insight into the behavior, progression and treatment response of BGUS is not studied.

Double Gammopathies represents a rare condition. The long-term tracking of these unusual cases may give us insight into the pathogenesis and clinical behavior of Double Gammopathies. Investigations related to genetics of these clones can indicate markers that lead to more aggressive conditions.

The authors certify that they have obtained all appropriate patient consent forms. In the form the patient(s) has/have given his/her/their consent for his/her/their images and other clinical information to be reported in the journal. The patients understand that their names and initials will not be published and due efforts will be made to keep the anonymity.

Copyright: Â© 2019 Khalid A, et al. This is an open-access article distributed under the terms of the Creative Commons Attribution License, which permits unrestricted use, distribution, and reproduction in any medium, provided the original author and source are credited.