Diagnosis and Treatment of Tyrosinemia: A Case Series 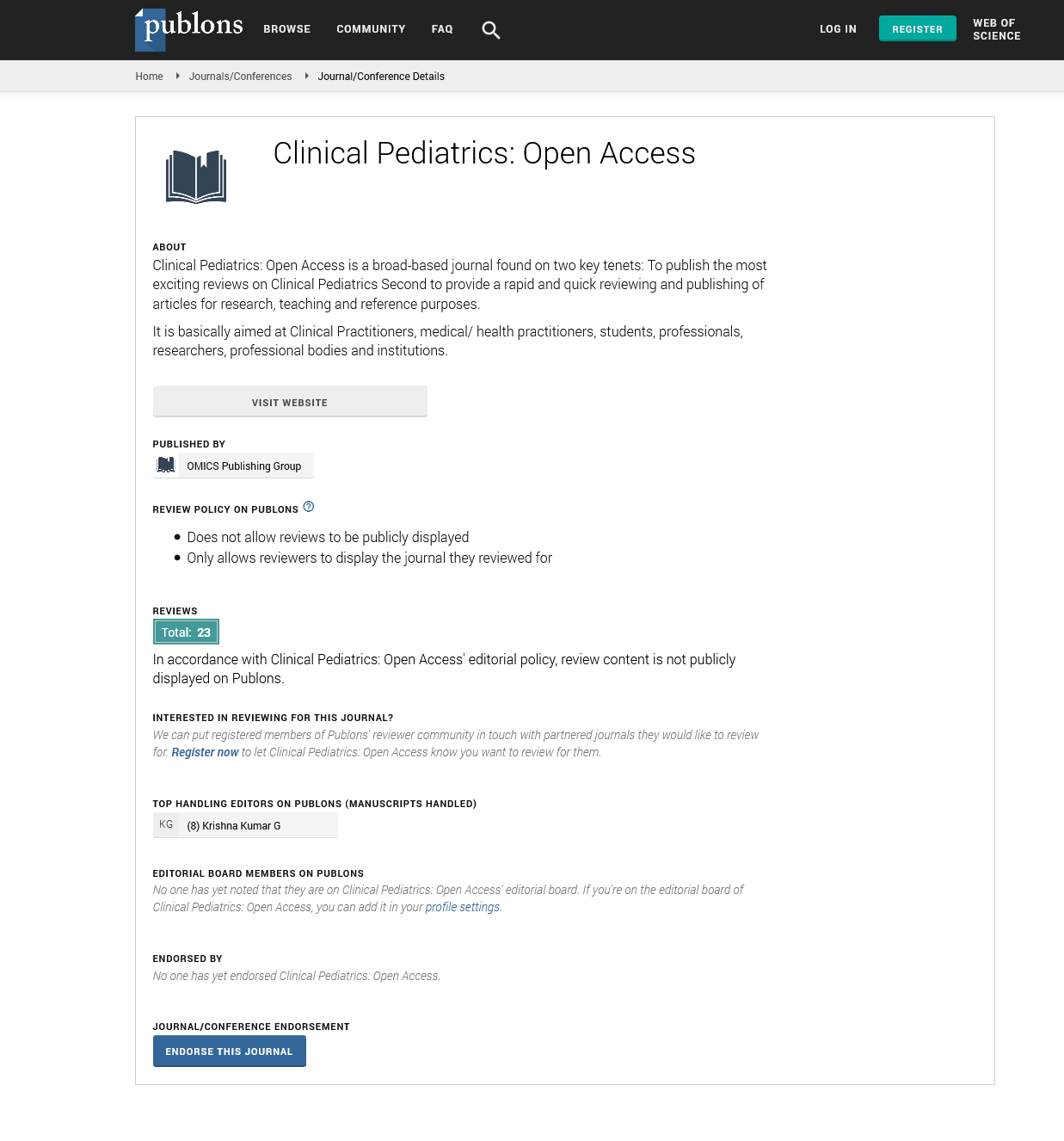 Diagnosis and Treatment of Tyrosinemia: A Case Series

Background: Hepatorenal tyrosinemia is inborn error of metabolism that affects numerous organs, particularly liver, kidneys, and peripheral nerves. Tyrosinemia is rarely reported from India due to lack of diagnostic facilities. We are reporting 3 male infants, who presented with varied clinical manifestations. All 3 of them had elevated 4- hydroxyphenyllactic acid levels in urine and elevated alpha-fetoprotein but no evidence of hepatocellular carcinoma.

Outcome: One infant is on low tyrosine-phenylalanine diet and under regular follow-up, the other two however, lost follow-up.

Conclusion: It is important to diagnose tyrosinemia as both treatment and prenatal diagnosis are possible.

Enzyme assays were not performed in any of these cases since nitisinone in India is unavailable, it's an orphan drug. We have to refer early for a liver transplant as it is curative. These treatment options were explained to all three patients and one patient is on low phenylalanine-tyrosine diet and other two lost to follow-up. Diagnosis of tyrosinemia was suggested by combination of early onset hepatic dysfunction and positive ferric chloride screen with raised alpha fetoprotein levels. The urine metabolites suggestive of tyrosinemia also add to high probability of type I tyrosinemia. The confirmatory tests were not available to confirm diagnosis further (Table 1).

Table 1: Comparison of test parameters among the cases.

Hereditary tyrosinemia type I is an autosomal recessive disorder caused by deficiency of fumarylacetoacetate hydrolase (FAH), the last enzyme of tyrosine degradation. The disorder is characterized by severe liver disease associated with bleeding disorder, hypoglycemia, hypoalbuminemia, elevated transaminases, and secondary renal tubular dysfunction leading to hypophosphatemic rickets. Hepatocellular carcinoma may eventually occur. Onset varies from infancy to adolescence. In the most acute form patients present with severe liver failure within weeks after birth, whereas rickets may be the major symptom in chronic tyrosinemia. Untreated, patients die from cirrhosis or hepatocellular carcinoma at a young age [1]. Tyrosinemia type II is also known as Richner-Hanhart syndrome. It is caused by mutation in the TAT gene on chromosome 16q22. Tyrosinemia type III is caused by mutation in the HPD gene. The severe liver damage in tyrosinemia is the result of defective degradation of tyrosine [2]. Tyrosinemia is identified in neonatal screening programs using tandem mass spectrometry methods to detect elevated tyrosine and/or succinylacetone. Elevated tyrosine levels also occur as a nonspecific consequence of severe liver disease or transient tyrosinemia of the newborn, which responds to ascorbic acid treatment. Quantitative measurement of plasma tyrosine and blood or urine succinylacetone is performed after a positive neonatal screen. The diagnosis of tyrosinemia I is confirmed by an increased concentration of succinylacetone, DNA testing is available for some mutations.

Prenatal diagnosis of tyrosinemia is possible either by the detection of succinylacetone in the amniotic fluid [3] or by measurement of fumarylacetoacetase in cultured amniotic cells. Holme and Lindstedt stated that since the first trial of NTBC treatment for type I tyrosinemia in 1991, over 220 patients had been treated by the drug using a protocol that included regular follow-up with reports of clinical and laboratory investigations. Only 10% of the patients had not responded clinically to NTBC treatment. In half of these patients, successful liver transplantation had been performed, which further reduced the mortality rate during infancy to 5%. The data indicated a decreased risk for early development of hepatocellular carcinoma in patients who started treatment at an early age. Of the 101 patients aged 2 to 8 years who had started NTBC treatment before 2 years of age, no patient developed cancer after 2 years of age [4].

Outcome and prognosis of tyrosinemia type I significantly improved after introduction of 2-(2-nitro4-trifluoromethyl benzoyl) cyclohexane-1, 3-dione (NTBC) [5,6]. NTBC acts as a strong inhibitor of hydroxyphenylpyruvate dioxygenase (HPPD) that prevent tyrosine degradation and stop the production of toxic metabolites such as maleylacetoacetate, fumarylacetoacetate, succinyl acetoacetate, succinyl acetone and 5-aminolevulinic acid, which are accounting for the renal, hepatic and neurological manifestation of tyrosinemia type I. Succinyl acetone and 5-aminolevulinic acid are responsible for neurological symptom in this disease [7,8]. NTBC stops hepatic and neurologic complications and has protective effect against the hepatocellular carcinoma in tyrosinemia if started early in life [7,9]. NTBC cannot entirely prevent liver cancer, so regular follow-up should be done in these patients [6]. NTBC blocks para-hydroxy phenyl pyruvic acid dioxygenase (P-HPPD), the second stage in the path of destruction of tyrosine, inhibits the accumulation of fumaryl acetoacetate and its modification to succinylacetone. These processes stop the production of 5-aminolevulinic acid, fumaryl acetoacetate, succinyl acetoacetate, succinylacetone and maleylacetoacetate that cause hepatic, renal and neurological symptoms [6-9].

Therefore, discontinuation of NTBC rapidly increases fumaryl acetoacetate, succinyl acetoacetate, succinylacetone that had a major role in developing of neurological crises and subsequently respiratory failure [6,7]. NTBC rises the blood concentration of tyrosine, so dietary restriction of phenylalanine and tyrosine should be done immediately, to inhibit deposition of tyrosine crystals in the cornea [9]. A low-phenylalanine, low-tyrosine diet may also play a role in management of type I tyrosinemia. Tyrosinemia II and III are more benign forms of hereditary tyrosinemia. Blocked metabolism of tyrosine at earlier steps in the pathway is responsible, and succinylacetone is not produced. The clinical features include hyperkeratosis of palms and soles and keratitis, which can cause severe visual disturbance. Poor dietary compliance with type II tyrosinemia is associated with mild cognitive impairment. Treatment with a phenylalanine- and tyrosine-restricted diet is effective.

Copyright: Â© 2018 Patil AA. This is an open-access article distributed under the terms of the Creative Commons Attribution License, which permits unrestricted use, distribution and reproduction in any medium, provided the original author and source are credited.