Monitoring of minimal residual disease (MRD) is today considered the most powerful predictor of outcome in acute leukemias, including acute lymphoblastic leukemia (ALL). The study aimed to determine whether panel of antibodies combination are more suitable than others for detection of MRD in Childhood B-lineage ALL. Eighty four (84) patients of ALL (B-lineage subtype) were enrolled in this study. Normal template for B. Cell precursors were been established in 15 control Patients by using 4 panels of monoclonal Abs (Mo Abs), {CD22, CD45, CD58 and CD97 in combination with CD10, CD19, CD34}. At diagnosis CD22 having the lowest incidence expression between the patients in 50% only, but CD45, CD58, and CD97 were expressed in 80.9%, 52.3% and 92.8% respectively. Analysis of MRD was performed for each Mo Abs combination at day 0 and day 14 post induction of chemotherapy by 4-color flow cytometer (FCM). The incidence of MRD were 61.9%, 70.6%, 60.0% and 55.5% for CD22,CD45,CD58 and CD97 respectively. Seventy-six from total 84 cases studied (90.0%) had at least one LAIP. Of these, 22 (29.0%) had only one LAIP and 54 cases (71.0%) had ≥ 2 LAIPS Conclusion: In the B-ALL patients (CD10/CD19/CD34/CD45)+ and (CD10/CD19/CD34/CD97)+, represented the highest incidence markers expression of leukemic cells with a significant correlation with blasts count, so it's the more specific for MRD detection.

Acute lymphoblastic leukemia (ALL) is the most common leukemia in childhood with a peak incidence at 2-5 years of age. The overall cure rate in children is 85% [1]. MRD is a powerful predictor of the overall response to treatment in childhood ALL.

The most reliable and validated methods to assess MRD in ALL are FCM analysis of leukemia-associated immune-phenotypes (LAIP) and polymerase chain reaction (PCR) amplification of antigen-receptor gene rearrangements [2].

MRD studies by flow cytometry rely on panels of antibodies to define unique immunophenotypic signatures of leukemic cells which must distinguish leukemic blasts from their normal counterparts, the CD19 and CD10 lymphoid progenitors of the bone marrow “hematogones”. Standard 4-color flow cytometry can detect 1 leukemic cell in up to 10 000 normal bone marrow or peripheral blood cells but this task typically requires considerable interpretative expertise [3].

Incorporating CD 97 as a marker into investigations of leukemia cells may allow discrimination of leukemia cells from normal haemopoietic stem cells. In B-ALL patients the CD34+/CD97+ subpopulation represented the bulk of leukaemic cells. Recent studies have highlighted potential markers that may improve the sensitivity of MRD detection by flow cytometry, CD 97 is one of these markers which show over expression in pediatric ALL [4].

Aim of the Work: To determine whether panel of antibodies combination are more suitable for detection of MRD in B-lineage all.

This study was carried out at Clinical Pathology and Pediatric Oncology Departments of Zagazig University hospitals. Ninety (90) patients of ALL (B-lineage subtype: Seventy (70) patients were of common ALL category, 14 patients of pro B ALL and 6 patients were pre B ALL), were participated in this study. Their ages ranged from 1 year to 17 years with mean age 7.4-4.5 years. They were 52 males and twenty 48 females with male to female ratio 1.08:1. Diagnosis of Blineage ALL was based on morphological, cytochemical, immunophenotypic and cytogenetic characteristics of leukemic blasts, (WHO 2008 classification).

Written consent was taken by patient’s parents to share in this study. For control, bone marrow was obtained from 15 patients with nonhematological malignancies undergoing bone marrow aspiration as a part of routine investigation e.g. idiopathic thrombocytopenic purpura (ITP) or lymphoma, for staging, without bone marrow infiltration (Proven by bone marrow biopsies).

The present study was approved by ethical committee of Faculty of Medicine, Zagazig University. Unfortunately 1 patient was died before day 14, 3 patients not achieved complete morphological remission (CR) and 2 patients were missed due to other reasons e.g. inadequate bone marrow samples or refusal to complete the study. For remission induction, all patients were treated with a chemotherapy protocol including Prednisone, Vincristine, Daunorubicin and L-asparaginase.

Newly diagnosed patients of B-lineage ALL and then after complete hematological remission (CHR), (day 14). Age more than 1 years and less than 18 years, both sex were included.

All the members of the study were subjected to the following

Patients were evaluated at diagnosis, Mo Abs combination were used to define leukemia associated immunophenotype (LAIP), this step served to define a leukemia phenotypic fingerprint to be used in follow up samples. For establishing the diagnostic LAIP 50,000 events were acquired and 500,000 events were necessary for detection of MRD.

LAIP is identified to allow the discrimination of leukemic blasts from normal B lymphocyte progenitors (normal template for each Mo Abs combinations was drawn) and relies on qualitative or quantitative differences in antigen expression between leukemic cells and their normal counterparts.

The LAIP present in an individual case has been identified by using multi floresence colors (MFC) with a comprehensive panel of Mo Abs, So MRD during the course of treatment and follow-up can be assessed by the quantification of the frequencies of these cells by MFC.

Data were entered checked and analyzed using Epi-Info version 6 and SPP for Windows version 8 [5]. Qualitative data were represented as frequencies and relative percentages.

Table 2: Incidence of aberrant phenotype within panel of antibodies used for MRD detection.

Table 3: Positivity of MRD among the four tubes used.

There was a highly significant decline in BM blasts and blast events at day 14 of chemotherapy induction compared to baseline level (before treatment), (Table 1), (Figures 1-4). 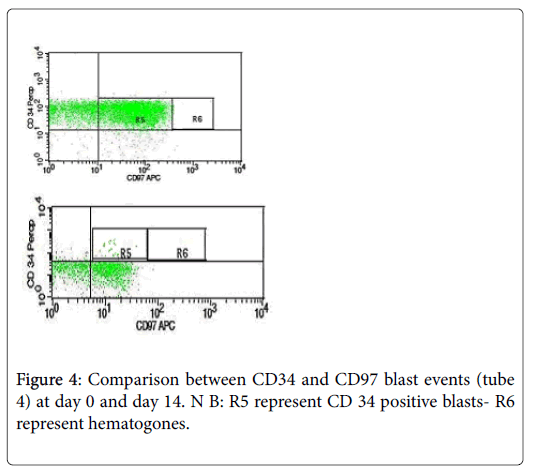 In the B-ALL patients (CD10/CD19/ CD34/CD45)+ and (CD10/ CD19/CD34/CD97)+, represented the highest incidence markers expression of leukemic cells with a significant correlation with blasts count, so it's the more specific for MRD detection.

Copyright: © 2016 Baraka A, et al. This is an open-access article distributed under the terms of the Creative Commons Attribution License, which permits unrestricted use, distribution, and reproduction in any medium, provided the original author and source are credited.