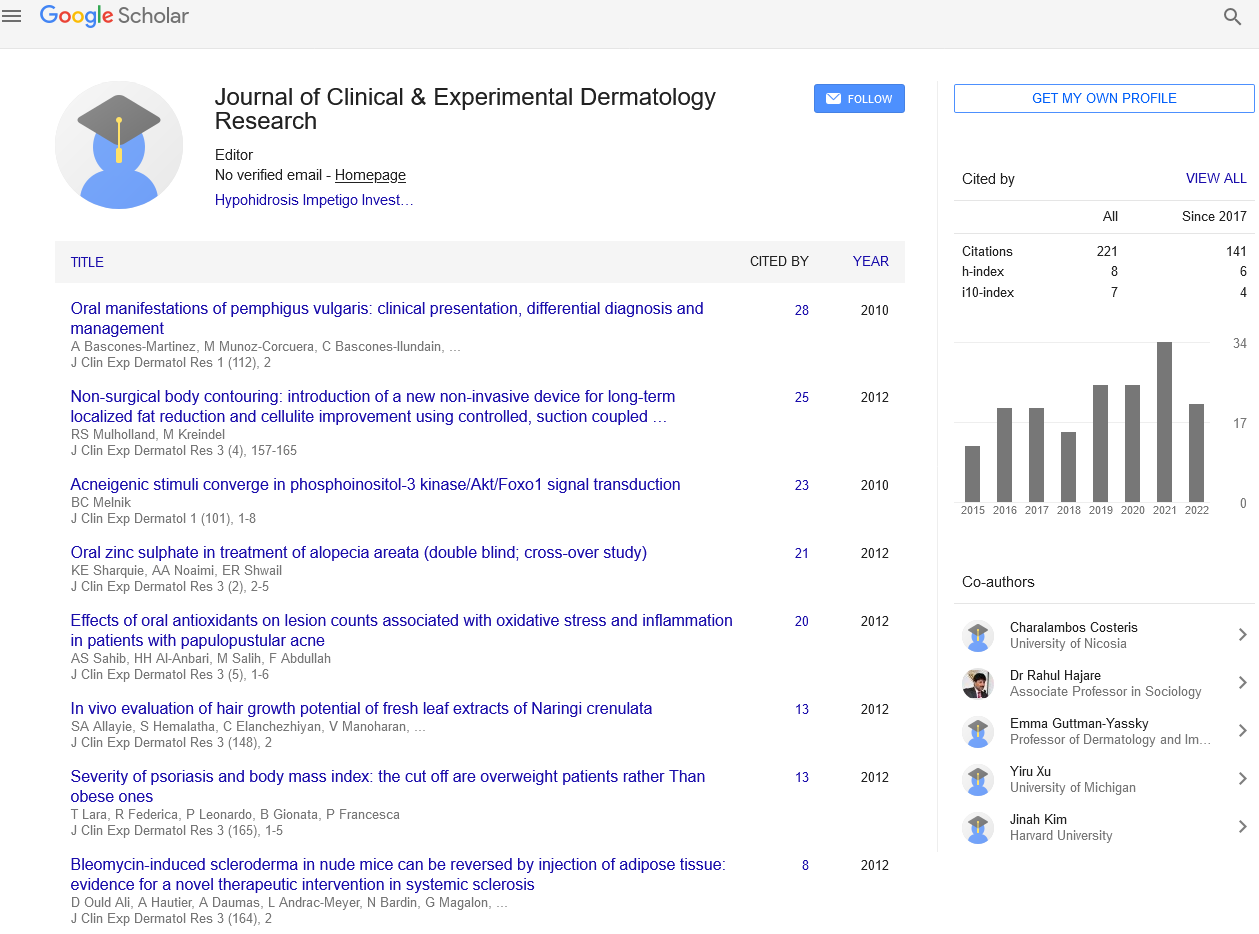 Crohn’s disease (CD) is a chronic, granulomatous, inflammatory bowel disease (IBD), and various extra-intestinal manifestations are seen, such as skin, eyes, joints, kidneys, liver and biliary tracts, and vascular systems. Although the etiology of CD is still not fully elucidated as yet, a number of studies, both human as well as animal models, indicate that environmental, genetic and immunological factors induce chronic gut inflammation. Mucocutaneous manifestations are frequently seen in CD, which include specific features, characteristic granulomatous or neutrophilic disorders, and non-specific secondary lesions due to nutritional deficiency. Some of them histologically share similar granulomatous features.

CD has been considered to be a chronic relapsing T-cell mediated disease. Activated T-cells diffusely infiltrate into the intestinal mucosa, submucosa, and lamina propria of patients with CD. Those T-cells are resistant to apoptotic stimuli, and cause persistent inflammation by secreting a number of cytokines and mediators. In particular, tumor necrosis factor-α (TNF-α) and interferon-γ (IFN-γ) produced by Th1 lymphocytes are important in CD, which may play a role in the destruction of the intestinal epithelial barrier [1]. Additionally, genetic backgrounds, bacterial superantigens, and innate immunity mediated by toll-like receptors (TLRs) may also be involved. Interleukin-12 (IL- 12) is produced in response to bacteria, and also important for Th 1 differentiation. IL-12 and IFN-γ mutually upregulate their production. Expression of IFN-γ and IL-12 are enhanced in CD [2]. For T-cells to gain access to gut, interactions of integrins, i.e. α4β7 and α4β1, and chemokine receptors are required [3].

Recent studies demonstrate more complex cytokine networks, in which Th17 cells play a central role, in chronic intestinal inflammation. The expansion and maintenance of Th17 cell responses require the activity of IL-23, and thus IL-23/IL-17 axis has been suggested to play a major role in the pathogenesis of CD. CD is associated with Th1 and Th17 cytokine profiles. Th17 type T-cell lineage is driven from naïve CD4 T-cell precursors by transforming growth factor-β (TGF-β) and IL-6, whereas IL-23 expands and maintains Th-17 populations. Th17 cells include IL-17, IL-21, IL-22, TNF-α, and IL-6. IL-17A expression and IL-17F mRNA levels are increased in the mucosa in patients with CD [4,5]. Major sources of IL-17 were CD3+ T-cells and CD68+ macrophages. The number of IL-17 producing T-cells is higher in CD than those in normal gut mucosa [4]. IL-23 is a heterodimeric cytokine composed of a p40 subunit, which is shared with IL-12, and a specific p19 subunit. The synthesis of the p40 subunit and the functional IL- 23 is enhanced in the gut of CD patients [6]. It is shown that IL-23 is mainly secreted from activated dendritic cells in the mucosa. IL-23 is suggested to promote inflammation directly by inducing IL-17, and also indirectly by inhibiting regulatory T-cells (Tregs) via suppression of fork-head box p3 (Foxp3) [7]. Additionally, mucosal cytokine network involves various cytokines such as IL-21, IL-22, and IL-32 [8,9]. IL- 21 and IL-22 upregulate matrix metalloproteinase (MMP) production [10], which may contribute to the matrix degradation in the intestine of CD. Also, IL-22 enhances expression of TNF-α, and IL-8 [11], which may induce neutrophil accumulation in the intestine of CD.

Macrophages produce a number of cytokines, and play a crucial role in tissue homeostasis, immunity, inflammation and repair process. Macrophages are one of the major sources of TNF-α, along with epithelial cells and mast cells [12]. TNF-α plays a crucial role in CD, and increased levels of TNF-α mRNA and protein have been shown in intestinal tissues of CD [13]. Also, mice overexpressing TNF-α develop CD-like bowel diseases [14]. TNF-α induces a strong activation of NF-kB in the cross-talk with IFN-γ. NF-kB leads to the secretion of proinflammatory cytokines and MMPs [15]. Further, NFkB is required for the increased permeability of intestinal epithelial tight junction [16], which may induce a defect in the intestinal barrier. Expression of TNF is increased in the intestinal mucosa in CD [17], especially in patients with active CD [18]. TNF- exerts its biological effects through two TNF-α receptors; TNF-R1 (55 kD) and TNF-R2 (75 kD). Soluble levels of TNF-R1 and R2 are elevated in the colon tissues of active CD, suggesting a dysregulated production of soluble cytokine receptors [19]. The serologic levels of TNF-α [18], as well as TNF-Rs [20], are also enhanced in patients with CD with the clinical disease activity. Further, beneficial clinical efficacy of targeting TNF-α indicates the crucial role of TNF-α in CD.

The innate immune system is the first line of defense against pathogens. Intestinal mucosa is exposed to fecal bacteria, which is recognized through TLRs expressed on intestinal epithelial cells. TLRs can be activated by exogenous stimuli such as bacteria or viruses, and also by endogenous ligands. Along with the recognition of microbial components, TLR signaling also plays an important role in the activation of the adaptive immune system by inducing proinflammatory cytokines and upregulating costimulatory molecules of antigen presenting cells. A recent report shows that unique CD14+ macrophages are significantly increased in number in intestine of patients with CD, which are functionally active and produce abundant levels of IL-23 and TNF-α [21]. Those macrophages predominantly produce IFN-γ, but not IL-17, which may further proceed on IL-23 production [21].

Mucocutaneous manifestations of CD are relatively common, with the incidence of 10-40% [22,23]. Those are generally classified into three subtypes; specific lesions with non-caseating granulomatous changes, reactive lesions which are occasionally seen, and non-specific secondary lesions due to nutritional deficiency. Granulomatous inflammation is induced by the dysfunction of cellular inflammatory response to remove foreign materials. Those processes may involve several cytokines such as TNF-α and IL-1, defective neutrophil function, and so on.

Metastatic CD, or cutaneous CD, is seen on the sites discontinuous from the gastrointestinal tracts, such as the lower extremities, intertriginous and flexural areas, trunk, and rarely genital (penis and vulvar) regions [24]. Clinically, metastatic CD assumes papules, subcutaneous nodules, infiltrative erythema, ulcerative or non-ulcerative plaques, edema, lichenoid lesions, and so on. Some cases present with only prominent swelling on the genitalia (Figure 1) [25]. Rare forms of metastatic CD assume pyoderma gangrenosum-like, erysipelas-like, necrobiosis, and cobblestone-like appearances [26-29]. As a rare variant, metastatic CD is seen on the face [30]. The umbilicus is connected to the bowel, and also involved [31]. Histology shows characteristic noncaseating granulomatous infiltration in the dermis (Figure 2), which is strongly immunoreactive for TNF-α (Figure 3). Otherwise, histological features such as necrobiosis, vasculitis, and panniculitis are also seen [32,33]. Differentiation from sarcoidosis is sometimes difficult. Metastatic CD is not always in parallel with intestinal activity, and rarely precedes the onset of bowel involvement several years [34,35]. Anti- TNF therapy is effective for refractory metastatic CD [36]. 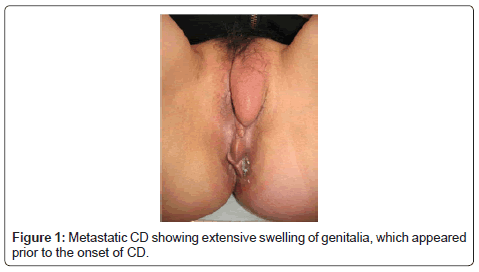 Figure 1: Metastatic CD showing extensive swelling of genitalia, which appeared prior to the onset of CD. Perianal abscess and fistulas are common, and sometimes appear as the first sign of CD (Figure 4). A perianal fistula is a pathological connection between the anorectal mucosal surface and the perianal skin. The ratio of perianal fissures and fistulas are reported to be 36% of patients [23]. Histological features show non-specific inflammation with multi-nucleated giant cells (Figure 5). Recent findings suggest failures in the tissue injury/repair process, myofibroblasts phenotypic changes, MMP production, and epithelial-mesenchymal transition are involved in the perianal fistula lesions [37]. 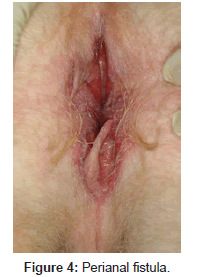 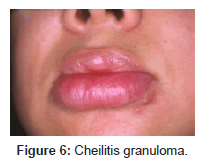 Erythema nodosum (EN) is a panniculitis which presents with tender, erythematous nodules mainly on the extremities, predominantly on the lower legs. It is generally considered to be a benign and selflimiting hypersensitivity reaction to various inciting factors. EN may be idiopathic, following infection, drug-induced, or also in association with other disorders including IBD. In a few series of EN objecting a large number of cases, CD is recognized in 1-2% [23] (Figure 7). Histologically, EN of early onset is characterized by a neutrophilic inflammatory infiltrate in the septa of the subcutaneous tissue. Sometimes, neutrophilic abscesses are observed in the subcutaneous tissues. Histological features show lobular panniculitis with granuloma formation (Figure 8). Studies of T-cell clonality of intestinal tissue of CD have shown proliferation of T-cell subsets expressing TCRs with Vβ11, Vβ12, Vβ13, Vβ15, and Vβ17 [41,42]. TCR Vβ in the lesional skin of EN showed Vβ8, Vβ14, Vβ15, Vβ17, and Vβ20 [43]. It is of note that several common TCR subunit families are detected in the intestinal and skin lesions of CD, with some differences. 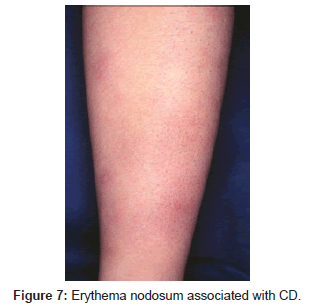 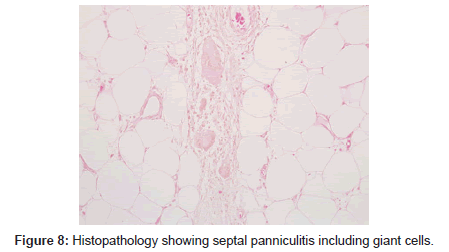 Pyoderma gangrenosum (PG) is a disease characterized by refractory, sterile, deep ulcers predominantly in the extremities in women aged between 20 and 60 years (Figure 9). PG is occasionally associated with several systemic diseases such as IBD, hematologic malignancy, Takayasu’s arteritis, neutrophilic dermatoses, and rheumatoid arthritis (RA). Clinical classification of PG includes ulcerative, pustular, bullous and vegetans type. Ulcerative type PG is most common, which rapidly enlarges with central deep ulceration and undermined borders. Bullous type PG is the most frequently seen in association with hematologic disorders. It is well-known that minor trauma precipitates PG, and there are several reports of PG occurring at percutaneous surgical sites, such as breast surgery, pacemaker implantation, splenectomy, hysterectomy, endoscopic tube insertion, cholecystectomy, and cesarean delivery. Those phenomena mean hyper-reactivity of the skin in response to minor trauma. 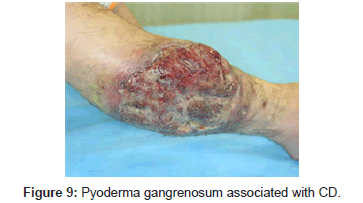 Psoriasis is immunologically mediated by aberrant, skin-directed T-cells. Recent progress shows that Th1/Th17 type T-cell subsets play a distinct role in the pathogenesis of psoriasis. IL-23 released from dendritic cells (DC) (TNF-α and inducible nitric oxide synthase (iNOS)-producing DC; Tip-DC) leads to activation and proliferation of Th17 cells. The Th17 subsets release IL-17A and IL-22, which promote neutrophil and keratinocyte hyperproliferation, respectively. Recent investigations suggest genetic and pathologic connections between psoriasis and CD [44]. The prevalence of psoriasis is 9.6% in 136 patients with CD, whereas only 2.2% in controls [45]. On the other hand, psoriatic patients, in particular those with arthritis, frequently show microscopic inflammatory changes of colonic mucosa even in the absence of bowel symptoms [46], which suggest that colon is also one of the organs susceptible by psoriasis. Both psoriasis and CD is associated with genetic susceptibility loci of IL-12B and IL-23R [47].

Sweet’s syndrome (SS) (acute febrile neutrophilic dermatosis) is characterized by fever, polymorphonuclear neutrophilic leukocytosis, and multiple, raised, painful erythematous plaques with superficial small pustules on the face and limbs. SS can arise as an idiopathic syndrome, in association with infection (i.e. upper respiratory tract), paraneoplastic (i.e. especially haematological malignancy), pregnancy, and drugs. Also, SS often occur in patients with immunologic disorders such as RA and IBD, most of which are CD [48]. SS is suggested to be a hypersensitivity reaction to infectious (bacterial, viral), chemical, or even tumor-associated antigens, possibly mediated by T-cell-dependent immune responses. The secreted cytokines such as IL-1, IL-6 and IL-8 are suggested to trigger neutrophil chemotaxis and activation. Also, IL- 17 promotes neutrophil migration [49], and thus may play a role in the induction of SS. Neutrophils produce reactive oxygen and nitrogen metabolites which may induce gut inflammation [50].

Biologics targeting TNF-α are widely used with dramatical effects for CD, as well as RA and psoriasis; however, psoriasis-like or palmoplantar pustulosis-like lesions are paradoxically induced during anti-TNF-α therapies (Figure 11) [57,58]. On the other hand, development of CD during etanercept therapy for psoriasis has also been reported [59]. The most promising explanation for this paradoxical effect is that TNF inhibition can interfere with the balance with IFN-α, which may promote an autoimmune response [60]. Other possibilities include that persistent TNF depletion results in downregulation of T-cell responses and in turn induction of novel regulatory pathways. 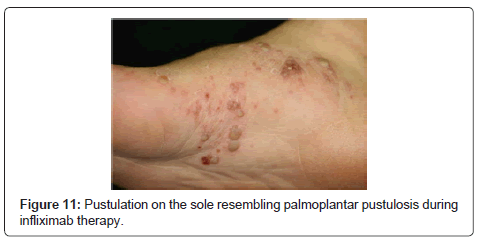 Because CD develops numerous mucocutaneous manifestations, which may precede the intestinal disease, dermatologists should be aware of various symptoms. Along with the progress of pathophysiology of CD, better understandings of immunobiology of mucocutaneous signs are expected.

Copyright: © 2011 Yamamoto T. This is an open-access article distributed under the terms of the Creative Commons Attribution License, which permits unrestricted use, distribution, and reproduction in any medium, provided the original author and source are credited.