Correlation of miR-100 Expression with Clinopathological Parameters in Bladder Cancer

Correlation of miR-100 Expression with Clinopathological Parameters in Bladder Cancer

Objective: Bladder carcinoma is one of the most common tumors in the world and, despite the therapy currently available, most of the patients relapse. MicroRNA- 100 is down regulated in bladder cancer tissue in comparison to normal tissue; however, clinical significance of miR-100 in human bladder cancer has not been elucidated. The aim of study was to correlate miR 100 expression levels with tumor grade, stage and recurrence.

MicroRNAs (miRNAs) are small, single-stranded, non-coding RNAs of 22-25 nucleotides, which are highly conserved between species. They control the expression of genes by inhibition of target mRNA translation. miR-100 is one of oldest miRNA known in plants and animals however its significance is not established. Dysregulated expression of miR-100 has been found in various types of cancers including bladder cancer. miR-100 can act as either an oncogene or a tumor suppressor in different cancers. Several studies have shown miR 100 as a potential diagnostic, prognostic marker in body fluids and tissue samples in several cancers including bladder cancer [6].

Twenty six patients with documented bladder transitional carcinoma were included in this study. The tumor tissue and histologically proven normal bladder tissue (3cm away from tumor), which served as control were segregated for each patient and 26 such pairs of tissue were made. Patients, who presented with haematuria or dysuria, underwent standard evaluation by history, physical examination and basic investigations. Those who were found to have bladder lesions suggestive of tumour on ultrasonography were explained in detail about the study protocol and an informed consent was obtained. Patients with documented urinary bladder mass underwent TURBT. After TURBT, those patients diagnosed with muscle invasive bladder cancer underwent metastatic work up which includes CECT abdomen and pelvis, LFT, Chest X-ray / CT Chest, and bone scan. Patients with proven muscle invasive bladder cancer by prior TURBT underwent radical cystectomy. Tissue samples following surgery (radical cystectomy/TURBT/TUR Biopsy) and adjacent normal bladder tissue (more than 3 cm away from bladder tumor) were subjected for histopathology and quantification of miR 100 (Methodology as detailed below). Samples were sent in numerical code to the evaluator. The expression level of miR 100 levels was correlated with histopathology (Grading, Stage) of the tumor.

Total RNA was isolated from frozen specimens by homogenizing the tissue in TRIzol reagent. MicroRNA from tissue was extracted using miRNeasy mini kit. The quantity and purity of RNA were calculated by taking the absorbance of the samples at 260 and 280 nm (ratio at 260/280 >1.8) using UV spectrophotometer (Model- DU 640, Beckman Coulter, USA). cDNA was prepared from RNA using miScript II kit (Qiagen) according to the manufacturer instructions.

The quality of PCR products was checked by agarbose gel electrophoresis.

Values of miR-100 were expressed in mean ± SD. The results were statistically evaluated using SPSS program (version 20.0; SPSS inc., software). The change in miR 100 expression levels between normal and tumor tissue of urinary bladder were assessed by one sample t test while independent t test was used for correlation between tumor staging and grading. Paired t-test, Z- proportion method for difference, and Chi-square test were applied for parametric, non-parametric and categorical variables respectively. P-value < 0.05 was considered significant.

23 patients (88.5%) underwent TURBT whereas 3 (11.5%) patients underwent Radical cystectomy initially. Comorbidities were common in our patients. The most common were HTN, CAD, CVA, CKD and hypothyroidism. Most common symptom in our study was haematuria (n=25) followed by dysuria (n=5) (Table 1). 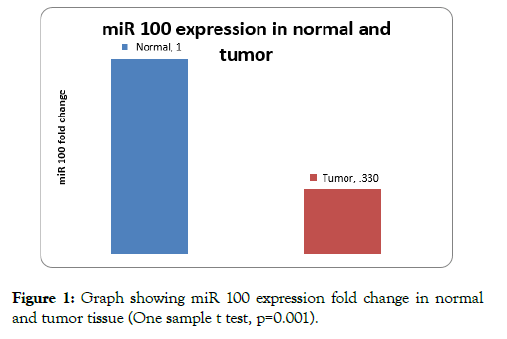 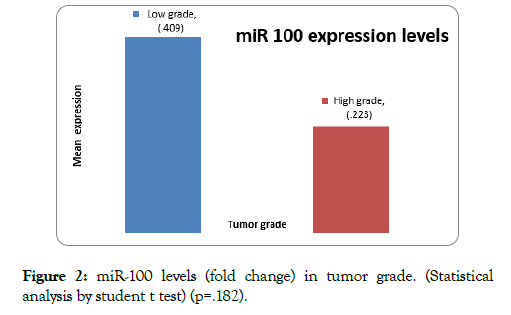 miR-100 expression levels (fold change) were found to decreased (compared to normal) in MIBC (T2), moreover the under expression was more in T2 tumors than Ta and T1; however the difference is not significant. (p=0.453) (Figure 3). 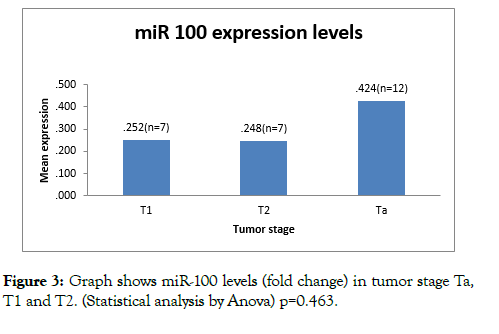 On analysing miR-100 expression levels in MIBC (T2), the under expression is more in T2 tumors than Ta and T1; however the difference is not significant (p=0.453) (Figure 4). 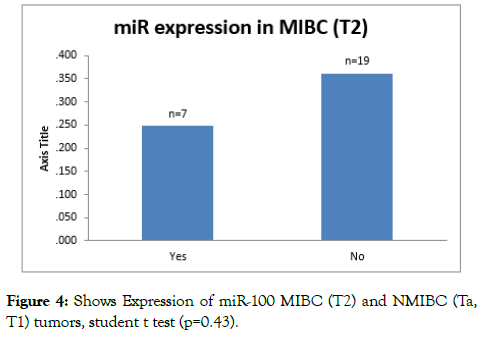 Eight patients had recurrence within follow up of patients. Mean levels 2^-DDCT (fold change) in recurrent tumors were 0.16 ± 0.19 whereas fold change in nonrecurring tumors was 0.40 ± 0.38. On analysis with student t test, difference between mean was significant (p=0.045) (Table 3 and Figure 5). 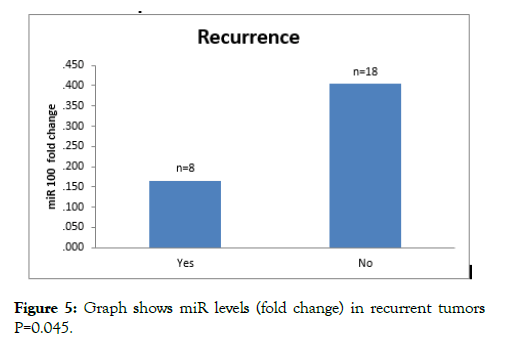 Progression and survival only one patient had progression during the study, patient developed liver metastasis after radical cystectomy. All patients survived till the conclusion of study.

MicroRNAs are recent biomarkers which are found to have role in many cancers including bladder cancer. Some of miR may have role in diagnosis, predicting recurrence, predicting prognosis and in treatment [7,8].

Aberrant expression of miR-100 is associated with tumorigenesis and tumor progression as shown in some studies. miR-100 act as oncogene or a tumor suppressor gene, depending on the tumor type examined. miR-100 is downregulated in nasopharyngeal cancer, oral squamous cell carcinoma, ovarian cancer, hepatocellular carcinoma hepatoblastoma and bladder cancer, whereas its upregulation has been described in acute myeloid leukemia, medulloblastomas, gastric cancer, pancreatic cancer and prostate cancer [9-13].

Our study of miR-100 was based on the fact that miR-100 is one of the oldest animal miR but not having clear role in bladder cancer.

Olivera, et al. found that forced expression of miR 100 in bladder tumor cell line inhibited the proliferation and colony formation. This provided the evidence that miR 100 may acted as tumor suppressor in bladder cancer [16].

Xu, et al. initially conducted study on 10 pairs of bladder tumor and adjacent noncancerous tissue and found miR-100 was down regulated in NMIBC and MIBC. On basis on these results they studied effect of miR-100 on cell growth, cell cycle, formation of colony, migration of cells and invasiveness of tumors. They further investigated tumorigenesis in bladder tissue in nude mice models and validated mTOR as target gene. They found that low miR-100 caused negative effect on stage of disease, progression in disease, recurrence of tumor and survival [6].

Song, et al. also found downregulation of miR-100 in bladder tumor in particular compared to adjacent normal tissue. In addition to miR-100 they found alteration in expression of other 50 microRNAs [10,17].

We found in our study that miR expression was significantly underexpresed in tumor tissue compared to normal (p=0.001). On further analysis miR-100 expression levels were more decreased in recurrent urinary bladder tumors (p=0.045) reaching significance however not significant in tumor stage and tumor grade (student t test and anova).

Our study showed that the downregulation of miR-100 may more frequently occur in bladder cancer tissues with aggressive clinicopathological features and it may be used along with other markers (including microRNAs) to predict prognosis and recurrence.

The present study elucidated that miR-100 expression is downregulated in Bladder cancer tissue than normal bladder urothelium. The miR-100 expression levels were decreased in all bladder tumors however reaching significance in recurrent, high grade tumors. The less number of patients and short duration follow up limited our assessment of correlation of miR 100 with tumor progression and survival. This study can help us in planning future comprehensive research in miR 100 and other tumour markers in bladder cancer.

Copyright: Â© 2020 Kumar M, et al. This is an open-access article distributed under the terms of the Creative Commons Attribution License, which permits unrestricted use, distribution, and reproduction in any medium, provided the original author and source are credited.