Introduction: The main objective of this presentation is to attract attention about a hot topic regarding menopausal hormone therapy replacement. It is a good option for a woman to follow or no this hormonal therapy replacement during menopause period, taking into account the benefits and also the risks? This is a modern phenomenon in this moment in the medical field, but is it really safe for a woman to follow this therapy? Much more research has to be done regarding this therapy to not expose many females to unnecessary side effects. Can we force the natural evolution of the mechanisms of the body in this direction?

Materials and methods: Further on it will be presented two cases of medical practice, with two major side effects of this therapy, not insignificant, which should give food for thought. The first case develops occurrence of breast malignancy and the second with endometrial cancer after the therapy.

Results and discussion: The idea of menopausal hormone replacement therapy appeared with the all best intentions for this difficult period in a woman’s life in menopause, but the reality is that dangerous side effects can occur like mentioned before.

Conclusion: The most important conclusion of this presentation is that hormone replacement therapy at menopause is not safe and more research is needed in the future for the best decision.

The menopause is a period of decline in women’s life because of stopped ovarian function to secrete estrogens hormones with multiple benefic effects and protective for a woman such as: the protection for atherosclerosis, ischemic heart disease and acute heart attack. In this period of menopause installation, the risk of acute myocardial infarction become equal with the man’s or more or it can become increase comparative with the mans. Also the risk of osteoporosis and fractures at minor traumas is increased in correlation with many other important symptoms like: irritability, nervosas, insomnia, psychoemotional instability, flashes, symptoms which can develop a real discomfort in daily activities.

The arterial hypertension is possible to appear at a woman’s previous health, during the period of menopause. Not in the last, the capacity of procreation of a woman is in the end because of missing ovulation. Take into account all these majors inconvenient, the research activity was orientated for found a solution to delay as much as possible the period of installation of menopause. The idea will be to install so the woman can have menstrual cycles all life if it is possible. For this reason appeared the menopause replacement therapy, initial with androgens hormones for a period of time to start the menstrual cycle (induction cycle) and after that with estrogens hormones through all life to maintain the menstrual cycles as long as possible.

Initial was believed that this therapy will be very benefit from many points of view, inclusive for prolong the procreation capacity of the women at older age. But this therapy is not inoffensive, because it exist side effects that can’t be neglected. The role of this presentation is to put in balance the risks comparative with the benefits, for the best decision. Not fewer are the cases in the medical practice when after this therapy appeared cases of endometrial cancers and malignant breast tumor formations.

Follow-up over 1 million women in the Million Women Study confirmed findings from other recent studies that women who currently using HRT are more likely to develop breast cancer than those who are not using HRT [2].

Follow-up over 700,000 women in the Million Women Study confirmed this and showed that the risk of endometrial cancer is also increased in women who take tibolone; but is not altered, or may even be reduced, in women taking combined estrogen-progestogen HRT [3].

The first case: I present the clinical case of a woman 46 years old, in early menopause from 38 years old, who wants to become pregnant, because during this period of time she didn’t have any children’s. For this reason she started a scheme of hormonal therapy replacement with the most important objective in the first instance reappearance of the menstruation cycles.

After the first induction cycles with androgen therapy replacement, for this reason, she follows a therapeutic scheme in the first moment with androgen therapy replacement-Lutenyl 5 mg-1 drug/day during three weeks. After this period of time the first menstrual cycle (induction cycle) starts and after that for maintain the menstrual cycles she continue the therapeutic scheme with Cycloprogynon 2 mg-1 drug/day for a long period of time. The indication was to have a life time menstruations and will also have the possibility to be pregnant and have a baby that she wants very much.

The woman, indeed can mention the menstrual cycles with estrogen therapy replacement-one cycle per month like a physiological menstruation, but after six month of this hormonal therapy observed apparition of a tumor formation in the breast, with dimensions ¾ cm, irregular borders, increase consistence and painful. For this reason she performs immediately a breast ultrasound (Figure 1). This examination confirm safe the presence of a tumor mass inside of the breast, with dimensions 3.5/4.5 cm, irregular borders and without enlarge lymph nodes present in the both axils. The patient refused to perform a mammography, because of irradiation and also refuse the biopsy puncture of the tumor mass. I want to mention that, before this incident, the patient performed in the past regular and repeated medical consultations of the breasts and repeated breast ultrasound investigations, twice/year in the last three years, like screening tests and everything were normal. More than that, she didn’t have in her family history antecedents of breast cancer. For this reason we can’t consider the genetic risk factor to be responsible for this diagnosis and also we cannot consider innocent without any risk- the menopausal hormone therapy replacement.

After the tumor mass was discovered at the level of the breast, she accepted surgical intervention procedure for removed the tumor mass but with preservation of the breast, because she refused a complete mastectomy or Hall stead procedure and after the histopathology examination (Figure 2) confirmed safe the diagnosis-breast ductal cell carcinoma, she follow after surgical intervention the complete protocol with radiotherapy and chemotherapy with good evolution and without any recidivate during three years. 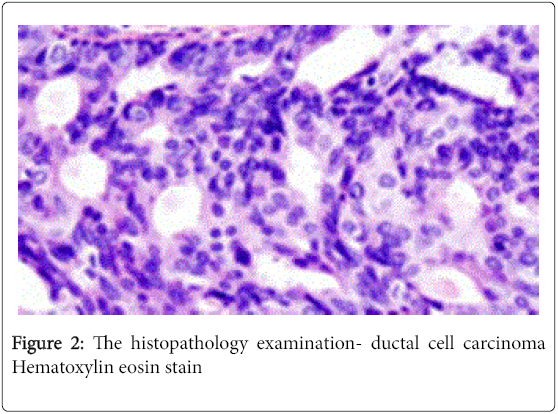 The second case: I present other clinical case of a woman 47 years old in menopause from 2 years, who started the same therapeutic scheme-menopausal hormone therapy replacement with androgen therapy replacement-Lutenyl 5 mg-1 drug/day during three weeks. After this period of time start the first menstrual cycle (induction cycle) and after that for maintain the menstrual cycles she continue the therapeutic scheme with estrogen therapy Cycloprogynon 2 mg-1 drug/day continuum. The menstrual cycle was present once per month with duration five days like a physiological cycle, but after 20 weeks of administration appeared a severe bleeding, with clots, duration of 14 days and it can’t be stopped with anticoagulant therapy. After hospitalization and an abdominal ultrasound put in evidence a tumor mass inside of the uterus (Figure 3) and endometrial biopsy was performed this confirm the diagnosis of endometrial carcinoma (Figure 4) and the women must to perform total hysterectomy and bilateral removed of the ovaries. 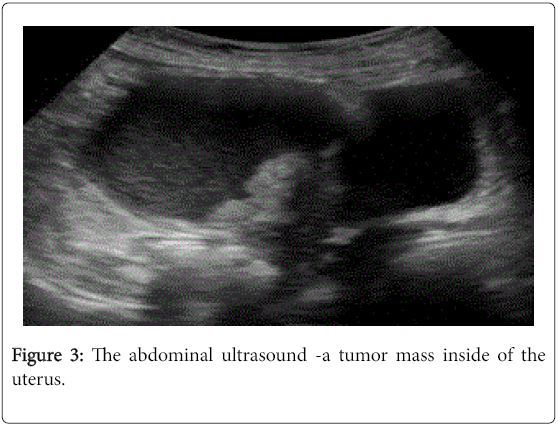 Figure 3: The abdominal ultrasound -a tumor mass inside of the uterus. I want to mention that with one year ago she performed an abdominal ultrasound like screening and it was normal, without any tumor mass inside of the uterus. I have observed other 28 cases in similar situations, who were followed by menopausal hormone therapy replacement and the side effect appeared prolong menstruation 10 days or 14 days, with clots, without response at anticoagulant therapy and all the cases after endometrial biopsy was confirmed the diagnosis of endometrial carcinoma.

So, the main important reason of this presentation is to take in consideration also the benefit of this therapy, but also the risk factors for a woman during menopause period. Hormone replacement therapy in menopause with androgens and estrogens hormones is not inoffensive. Malignant tumor of the breast could appear like secondary side effects of this therapy and is important not to ignore the effects. This example of this case is not unique. Because this patient performed repeated breast controls, before this therapy and were normal and also genetic tests were negative and no other family members had this diseases, we cannot incriminate that the genetic risk factor could be incriminate in cause of the disease. The most important group of women’s risk, are the women’s in early menopause (young), without babies, because they have tendency to follow this therapy and expose herself at very dangerous risks, to a possibility to have a baby, comparative with old women’s who had a baby and they are not that interested. Of course, the last category of women’s can benefit for other reasons after follow this therapy, but all most of the time she refused.

Endometrial carcinoma could be other side effect of this hormone replacement therapy in menopause and it’s dangerous.

As shown in the PEPI trial, unopposed estrogen increased endometrial hyperplasia at a rate of 10% per year, and also caused atypical potentially precancerous histology in some women [7].

Twenty years after estrogen plus progestin use began to increase [8], questions remain about its association with endometrial cancer.

The conclusion of this presentation will end with a question: What do you believe that is the best decision for a woman in moment of installation the menopause period that to follow or not to follow this menopause hormone replacement therapy? Take into account the benefits but also the risks, because many women’s in this situation don’t know the best decision?

Copyright: © 2016 Stoicescu M. This is an open-access article distributed under the terms of the Creative Commons Attribution License, which permits unrestricted use, distribution, and reproduction in any medium, provided the original author and source are credited.
Top