CD61 and CD41 are glycoproteins present on platelets and megakaryocytes. These glycoproteins act as receptors for fibrinogen, von Willebrand factor [vWf], fibronectin and vitronectin [10] CD62p is a glycoprotein of 140 kDa present in α-granules of resting platelets. It is translocated to the plasma membrane after activation. Expression of CD62p on the surface of circulating platelets indicates in vivo activation of platelets [11] CD63 a lysosomal membrane protein detected on the surface of activated platelets after release reaction normally not found on non-stimulated platelets [12].

The purpose of this study was to compare the platelet CD markers between normal individuals and untreated patients with type 2 diabetes mellitus by flow cytometry. It was postulated that platelets in patients with untreated type 2 diabetes mellitus circulate in the blood in hyperactive state and are causative of thrombotic complications so frequently encountered in these patients.

A total of 107 individuals [32 normal and 75 diabetics] were recruited in this study. Criteria followed for normal individuals were no history of illness and anti-platelet drugs intake. Criteria for inclusion in the study for patients with diabetes mellitus were: untreated patients type 2 diabetes mellitus, no history of drug intake particularly the antidiabetic or anti-platelet drugs, no evidence of diabetic complications and nonsmokers. Patients with type 2 diabetes mellitus were selected from Baqai University Hospital and Baqai Institute of Diabetes and Endocrinology Nazimabad. This study was approved by the ethics committee of Baqai Medical University, Karachi. Written informed consent was taken from all individuals.

Flow cytometric analysis of platelets was done within one hour after the collection of blood samples. Immediately after blood collection, the citrated tube was centrifuged for 10 minutes at 2000 rpm. Platelet rich plasma was separated into another polystyrene tube. Polystyrene test tubes were labeled as tubes 1, 2, 3, 4 and 5.10 μl of IgG isotype, anti CD41, anti CD63, anti CD61 and anti CD63 [BD Biosciences USA] were added to the tubes as follows:

Tubes 2 and 3 were considered as resting platelets while tubes 4 and 5 were activated platelets. 50 μl of platelet rich plasma was added to each tube. 25 μl of ADP was added to tube 4 and 5. Each tube was incubated in the dark for 20 minutes. After incubation, 1 ml of phosphate buffer saline was added to each tube for dilution. The tubes were analyzed using flow cytometer FACSCalibur [BD Biosciences]. Forward scatter and side scatter signals were acquired with log amplification. A region was drawn on platelet population in the scatter plot. CD41, CD61, CD62P and CD63 expression was analyzed on the gated population. Results were recorded as % of the positive gated platelets. 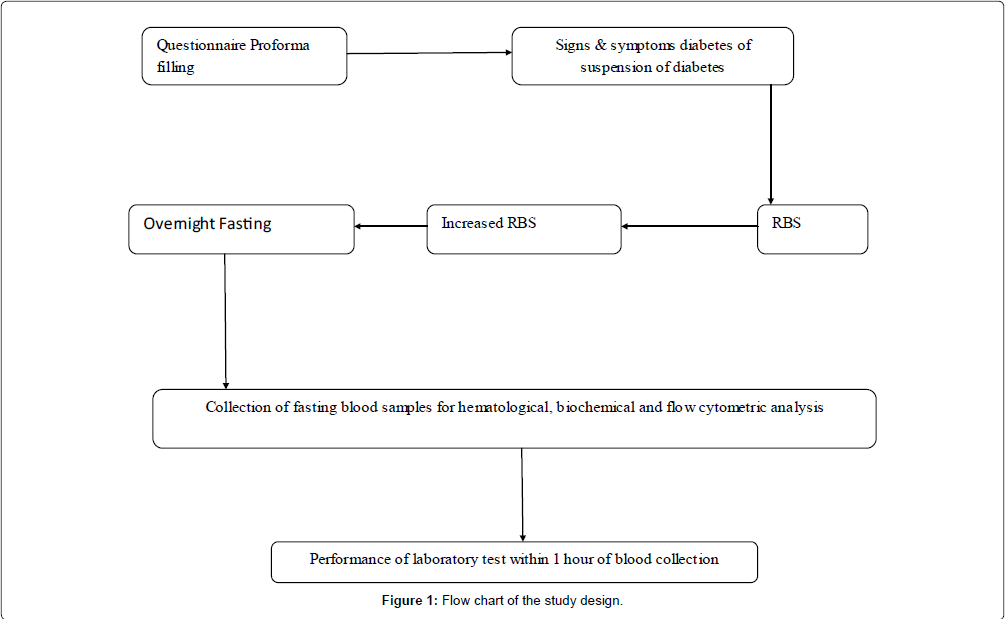 Mean age of the normal individuals was 45 ± 6 years while the in diabetics it was 51 ± 8. Normal group comprised of 15 male and 17 females, while diabetic group included 28 men and 47 females. Mean fasting blood sugar of normal subjects was 81.27 ± 7.94 mg/dl while that of diabetic group was 140.54 ± 9.63 mg/dl. Comparison of both groups showed statistically significant difference [p<0.001]. Random blood sugar also showed significant difference [p<0.001]. Concentration of HbA1c in normal group was 4.14 ± 0.61% that was significantly lower [p<0.001] as compared to diabetic group i.e. 7.43 ± 0.41%. Comparison of lipid profile of normal and diabetic subjects showed statistically significant difference [p=0.001] in serum cholesterol, triglycerides and high density lipoprotein. Results of biochemical parameters are shown in table 1.

In patients with untreated type 2 diabetes mellitus, comparison of platelet markers CD 41 and CD61 at rest and after activation with ADP did not show any statistical difference in their % fluorescence positivity [p=0.749, 0.870 respectively]. However, CD62 and CD62p showed significant increase in their surface expression after activation with ADP as compared to their resting state as shown in table 2.

Paired t-test was used for comparison

Table 2: Comparison of resting and activated platelets of patients with diabetes.

Comparison of mean % fluorescence positivity of CD41 and CD61 in resting and ADP activated platelets showed no statistical difference in normal subjects and diabetics. However, comparison of CD63 and CD62p positive platelets of normal subjects and patients with untreated type 2 diabetes mellitus in resting and activated state showed significant difference p value being 0.001.

Platelet flow cytometry is an emerging tool in diagnostic and therapeutic hematology. It is eminently suited to assess the expression of platelet surface receptors both qualitatively as well as quantitatively. It can thus serve as a useful parameter for in vivo expression of platelet activation and thus fore-warn the risk of thromboembolism which is inherent in patients with untreated type 2 diabetes mellitus [12].

This study showed that platelet CD makers 41 and 61 when evaluated in resting platelets as well as activated state did not show any change in their % fluorescence positivity. Furthermore these are highly stable markers are not affected by activation with ADP. This finding correlates well our earlier findings [17]. In contrast to CD 41 and 61, CD 63 and 62p are up regulated upon activation with platelet agonists. Activation of platelets with ADP showed increased expression of CD63 and CD62p in normal as well as in patients with untreated type 2 diabetes mellitus. However, the response was different between the two groups. Significant increased positivity of CD63 and CD62p indicates that platelets of patients with diabetes mellitus are more responsive to agonists and are more prone to activation after exposure to the agonists. This observation constitutes an important and first step in the evaluation of the state of platelet reactivity in disorders associated with thrombo-atheromatus complications, type 2 diabetes mellitus being the prototype of such disorders. This finding shows that platelets of patients with diabetes are in activated state as compared to normal subjects. Our findings are consistent with that of Matzdroff et al. [11] and Ostermann et al. [18] Matzdroff et al. [11] reported that activation of platelets with agonists like ADP or epinephrine results in increased expression of CD62 and CD63 on the surface of the platelets. Nomura et al. [19] used CD62 for the identification of platelet functional status in diabetes.

Tschoepe et al. [15] showed that platelets with increased surface glycoprotein expression continue to circulate in the blood before consumption during platelet aggregation. It is a well-established fact that patients with diabetes mellitus have large platelets in their blood with enhanced aggregation potential [20]. Activated platelets in patients with diabetes suggest increased consumption and as well as production of platelets [21]. Young platelets are more reactive and become easily activated in vivo [22].

In the light of the above results and discussion it is concluded that; CD41 and CD61 markers do not show any change after treatment with ADP. These markers therefore are of no value in the diagnosis and treatment of various thromboembolic episodes. Increased CD63 and CD62p expression in newly diagnosed untreated patients with diabetes is the hallmark of in vivo platelet activation and can be used as marker of activated platelets.

Copyright: © 2013 Saboor M, et al. This is an open-access article distributed under the terms of the Creative Commons Attribution License, which permits unrestricted use, distribution, and reproduction in any medium, provided the original author and source are credited.