Results: During awake intubation, the magnitude of change of both NIBP and HR was greatest in Group REI as compare to Group FOB. Time taken for intubation and success rate were better in FOB group, while complication like airway trauma was higher in awake retrograde intubation group (REI).

Conclusions: Awake Endotracheal intubation using FOB and REI in adult may cause increases in MAP and HR. However we observed maximum increase in heart rate and MAP occurred at the end of intubation in REI group than FOB, while time taken for intubation were lesser and success rate of intubation were superior in FOB as compare to REI group.

Fiberoptic intubation, though technically demanding is considered the safest and most effective method in cases of difficult intubation. Its main benefit is that it permits direct visual control of the intubation procedure so that a directional error is impossible. Fiberscope is sophisticated and expensive apparatus and handling requires expertise. It is not readily available at all health care facilities in developing countries. In case of non-availability of fiberscope awake retrograde intubation is an alternative technique for difficult intubation.

Retrograde intubation was first described by Butler and Cirillo [1] in 1960 to secure the airway in difficult intubation. In retrograde intubation endotracheal tube is advanced into trachea by railroad technique without direct visualization of trachea. Disadvantage of retrograde method of intubation, after withdrawal of the guidewire, endotracheal tube advancement may inadvertently slip into the esophagus [2] due to the short distance between the guidewire's entry point and the vocal cords.

The Aim of our study was to compare hemodynamic response, time taken and success rate of intubation following awake retrograde endotracheal and fiberscope assisted intubation (Figure 1). 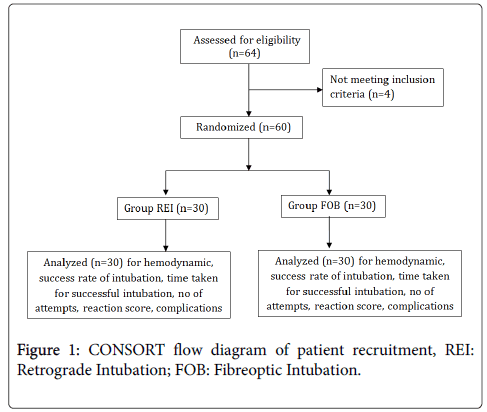 After institutional ethical committee approval and informed written consent, 64 patients aged 25-60 yrs, ASA class I and II of either sex having difficult airway scheduled for elective surgery under general anaesthesia were randomly and equally placed in either of two groups.

Both groups of patients were nebulized with 4 ml of 2% lidnocain for 5 min. After waiting for desired level of oral anaesthesia, cricothyroid membrane was identified and local anaesthetic was infilitrated followed by instillation of 4 ml of 2% lidnocaine. Patients were asked to cough to spread local anaesthetic in different part of airway. Before airway manipulation each patient received a bolus dose of fentanyl 1 μg/kg over 30 s.

For Fiberoptic intubation 5 mm flexible fiberoptic bronchoscope was used, tracheal tube was mounted on fibreoptic bronchoscope which was inserted through the nostril and passed into the trachea until the carina was visualized when endotracheal tube was passed into carina FOB was withdrawn. Tube placement was confirmed by end-tidal carbon dioxide (ETCO2) waveform on the monitor.

After endotracheal intubation, general anaesthesia was induced using propofol+fentanyl+rocuronium and isoflurane, then surgery was allowed to proceed. Patients from both groups were ventilated with a mixture of 50% nitrous oxide in oxygen and 1% isoflurane. Anaesthetist who was blinded to the method of intubation recorded the following parameters.

• Airway trauma like laryngeal stridor or spasm, bleeding were noted.

Data was analyzed using statistical software (SPSS Inc., Chicago, USA). Demographic and clinical data from the two groups were compared using the two tailed t test and chi-square test. Comparison of vital parameters was done with paired-t-test. Intergroup comparision of success rate of intubation was done with chi-square test. Intergroup comparision of vital parameters and time taken for successful intubation was done with ANOVA test and. All quantitative data were expressed as mean ± standard deviation (SD). A P-value of less than 0.05 was considered statistically significant.

Demographic profile of patients in two groups was comparable and non-significant (Table 1).

As shown in Table 3, In Retrograde group, out of 30 patients 20 patients (66.7%) were intubated successfully.

In Fibreoptic group, out of 30 patients 28 patients (93.3%) were intubated successfully. Percentage of airway trauma were higher in group REI (76.7%), >65%present with sore throat and complications was not any life threatening.

There was no study available which compared the total average time taken during intubation by using Retrograde and Fibreoptic technique. Our study demonstrates that endotracheal intubation facilitated by FOB required lesser time compared to retrograde intubation (Table 4), this is favourable for patient as prolonged intubation time can induce hypercarbia, increases in blood pressure and heart rate. However, study done by Finfer et al. [10] comparing direct laryngoscopy and fibreoptic intubation showed total time taken for intubation was significantly longer with the fiberoptic bronchoscope.

REI is an alternative technique in difficult situation where blood and secretion within oral cavity and unavailability or expertise restricts the use of fiberoptic equipment [11]. This technique is relatively easy and safe, and should be considered in difficult airway management.

We would like to thanks statistician Dr TB Singh and staff of Institute of Medical Science, BHU, and Varanasi for their valuable support.

Copyright: © 2016 Singh A, et al. This is an open-access article distributed under the terms of the Creative Commons Attribution License, which permits unrestricted use, distribution, and reproduction in any medium, provided the original author and source are credited.
Top
betsoobetasus girisdumanbetkralbet supertotobet girisbetmatik giris adresimariobetbetturkey giris bahiscom girisasyabahis girisasyabahis giris