Agranulocytosis is a life-threatening disorder in any age and also in the elderly subjects who are receiving on the average a larger number of drugs than younger subjects. This disorder frequently occurs as an adverse reaction to drugs, particularly to antibiotics, antiplatelet agents, anti-thyroid drugs, neuroleptics or anti-epileptic agents and nonsteroidal anti-inflammatory agents. Although patients experiencing drug-induced agranulocytosis may initially be asymptomatic, the severity of the neutropenia usually translates into the onset of severe sepsis that requires intravenous broad-spectrum anti-biotherapy. In this setting, hematopoietic growth factors have been shown to shorten the duration of neutropenia. Thus with appropriate management, the mortality rate of idiosyncratic druginduced agranulocytosis is now of 5% to 10%. Today, drug-induced agranulocytosis still remains a rare event with an annual incidence from 3 to 12 cases per million of people. However, given the increased life expectancy and subsequent longer exposure to drugs, as well as the development of new agents, physicians should be aware of this complication and its management.

Idiosyncratic drug-induced agranulocytosis, or severe neutropenia, is characterized by: a neutrophil count under 0.5×109/L; usually health impairment; and often severe infections such as pneumonia, septicemia or septic shock, in case of natural evolution [1]. In the majority of cases, the neutrophil count is under 0.1×109/L. All drugs may be causative but clozapine, antithyroid drugs, sulphasalazine have been regularly incriminated [2].

It is a relatively rare disorder, more frequently reported in elderly patients who are receiving on the average a larger number of drugs than younger subjects [1,3]. Because of the infections in often frailty patients, it is associated with an estimated mortality rate of 5% to 20% [1].

In the present paper, we report and discuss clinical particularities of idiosyncratic drug-induced agranulocytosis or severe neutropenia in elderly patients, especially in the light of our own experience.

In Europe, the annual incidence of symptomatic idiosyncratic druginduced agranulocytosis is between 3.4 and 5.3 cases per million people per year [4]. In the USA, Strom et al. reported rates ranging from 2.4 to 15.4 [5]. In our experience (1996-2015), the annual incidence of drug-induced agranulocytosis remains stable, with about 6 cases per million of people, despite the development of the pharmacovigilance [6]. This incidence increases with the age, as only 10% of cases are reported in children and young adults and more than half of these episodes occur in people over 60 years old [1]. In a 91 patients cohort study followed in our hospital, 72% of patients were aged 60 years or more, 38% were 75 years old or older (Figure 1) [6]. 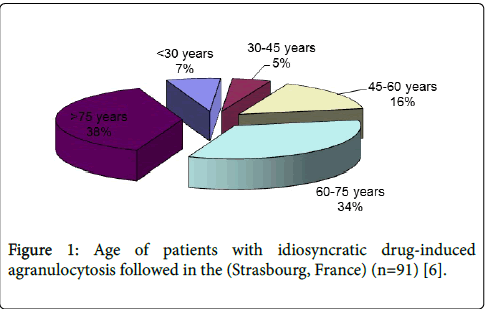 Agranulocytosis is about twice as frequent among women as men, but this rate is likely to be a biased because of the longer life expectancy in women, with a possible longer period of exposure to drugs [1].

All drugs may be causative of severe neutropenia or agranulocytosis [1,2,8]. However for the majority of these compounds, the risk seems to be very small. For drugs such as clozapine, sulphasalazine, antithyroid drugs, ticlopidine, gold salts, penicillamine and phenylbutazone, it may be higher [8].

Figure 2 includes all types of drugs involved in patients aged 65 years or more [3,6]. This is usually the same drugs as those implicated in adults, except perhaps for anti-thyroid drugs. 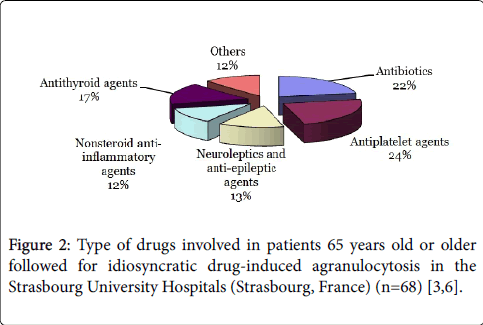 In the aforementioned cohort, two-thirds of the patients received more than 2 drugs, with a mean of 3 drugs, accounting for the difficulty in relating the agranulocytosis to its causative agent [3,6]. This is particularly the case in the elderly, polymedicated, fragile, with often self-medication and cognitive impairment making the drug investigation difficult or impossible.

In the literature, consensual criteria to establish the diagnosis of idiosyncratic drug-induced agranulocytosis has been described [9].

For a few drugs, specific risk factors have been identified such as histocompatiblity antigens (HLA): HLA B27 and levamizole, HLAB38 and clozapine [1,10]. Other risk factors include underlying autoimmune diseases, renal failure or concomitant treatment with probenecide [10].

Patients with idiopathic drug-induced agranulocytosis or deep neutropenia usually present, at diagnosis or during their follow-up: high fever, sore throat, stomatitis, diarrhea and a general sensation of malaise, including headache, chills, myalgia and/or arthralgia [1,2,11].

Most patients develop septicemia and some have evidence of severe pneumonia as well as anorectal, skin or oropharyngeal infection and septic shock [1,2]. This is particularly the case in elderly patients with several comorbidities and fragile underlying [3].

In our cohort study, clinical features included isolated fever in about 40% of the cases, septicemia and septic shock in 35% and documented infection in 25%, with pneumonia in 10%, sore throat and acute tonsillitis in 7% or others in 8% [6]. It is noteworthy that in elderly patients clinical manifestations were commonly severe with at least two-thirds of septicemia or septic shock (Figure 3) [3]. 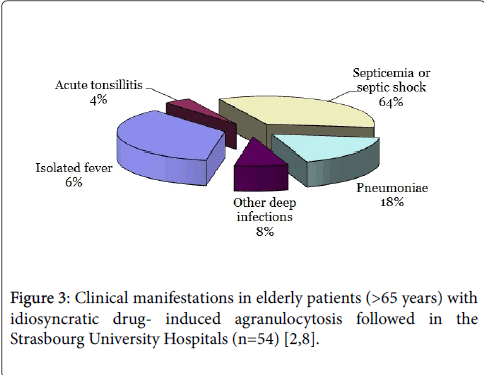 However, some patients remained at least transiently asymptomatic (in the beginning of the agranulocytosis), supporting the close monitoring of blood count in individuals receiving high risk medication such as antithyroid drugs or ticlopidine [1,2]; a small number of these hospitalized elderly patients (˂ 2%) remains asymptomatic.

Besides a granulocyte blood count below 0.5×109/L, the hemoglobin and platelets counts are commonly normal [1,2]. However in elderly patients, associated hematological abnormalities are frequent: anemia in at least 20% to 30% of cases, thrombocytopenia in 10% [6]. Thus in these elderly patients, bone marrow examination is routinely required to exclude an underlying pathology [1].

For several authors [12], bone marrow examination is also required to predict the duration of the neutropenia. The bone marrow typically shows a normal or mildly reduced total cellularity contrasting with the absence of myeloid precursor cells (“hypo-cellularity”) [1]. In some cases, the lack of any mature myeloid cells is observed, whereas immature forms to the myelocyte stage remain preserved (“myeloid blocking”) [1]. In the case of a lack of myeloid precursors, blood count recovery is unlikely before 14 days [12]. The picture of myeloid blocking is associated with a recovery within 2 to 7 days.

Differential diagnosis of idiosyncratic drug-induced agranulocytosis or severe neutropenia is often not easy in elderly patients. In fact, in this population, various miscellaneous conditions can induce absolute neutropenia [1,3].

The most relevant differential diagnoses include: (i) nutritional deficiencies (cobalamin and folate deficiencies); (ii) neutropenia appearing as the first manifestation of a bone marrow failure such as myelodysplastic syndromes; (iii) neutropenia secondary to severe sepsis immune (especially viral); or (iv) neutropenia associated with hypersplenism [1].

Other differential diagnoses rarely include, in elderlies, neutropenia secondary to the peripheral destruction of polymorphonuclear cells such as Felty’s syndrome or systemic lupus erythematosus (that is also often drug associated) [1].

Until the last decade, the mortality rate for idiosyncratic druginduced agranulocytosis was 10% to 16% in European studies [1,2], but it has recently dropped to less than 10% (˂5% in our cohort study [6]), probably due to the improvements in management and treatment of this condition [1,2,13].

The highest mortality rate is observed in older patients, as well as in those experiencing renal failure, bacteremia or shock at diagnosis [1,12].

We have partially confirmed these data in a uni- and multivariate analysis of factors affecting outcome in our cohort study (n=91 patients) [14]. Table 1 presents the data of the multivariate analysis. They showed that neutrophil count under 0.1×109/L at diagnosis, septicemia and/or shock were variables significantly associated with a longer time to neutrophil recovery.

Table 1: Multivariate analysis of variables influencing the time to neutrophil recovery ˃0.5 and 1.5×109/L in 91 patients with idiosyncratic drug-induced agranulocytosis [14].

In contrast, use of hematopoietic growth factors is associated with a shorter time to neutrophil recovery in our experience.

Remarkably in our study, age is not a prognostic factor [14], despite the severity of the clinical manifestations of agranulocytosis in elderly patients.

The management of idiosyncratic drug-induced agranulocytosis or severe neutropenia begins with the immediate withdrawal of any potentially causative drug [1,2]. In elderly patients, the patient’s medication history must be carefully (because of poly- and selfmedication) and chronologically obtained in order to focus on the suspected agent(s) [1]. Declaration of this side-effect in the pharmacovigilance authorities must always be carried. In our opinion, even for drugs with a known but rare association with agranulocytosis the rarity and unpredictability of the reaction makes regular routine monitoring not worthwhile [1]. However, in some high-risk drugs for agranulocytosis such as clozapine or ticlopidine or antithyroid drugs routine monitoring is required [15]. Measures to be undertaken concomitantly include the aggressive treatment of any diagnosed sepsis as well as the prevention of secondary infections [1,2]. Preventive measures require good hygiene maintenance with special attention to high-risk areas such as the mouth, skin and perineum [1]. Patient isolation and empirical prophylactic antibiotherapy (e.g. digestive decontamination) have been proposed, but their usefulness in limiting the infectious risk is far from validated [1]. In case of febrile neutropenia, bacteriological documentation is warranted [1]. The finding of a causative pathogen may be unsuccessful and, as in our cohort study, is typically achieved in only around 30% of the cases, consisting mainly of Gram-negative bacilli and Gram-positive cocci (mostly Staphylococcus sp.) [6].

The occurrence of sepsis in this life-threatening disorder, in a frailty population of patients, requires prompt management, including intravenous broad-spectrum antibiotic therapy, after blood, urine and any other relevant samples have been cultured [1-3].

Empirical broad-spectrum antibiotherapy is generally the best choice, but may be adapted, depending on the nature of the sepsis, the clinical status of the patient and local patterns of antibiotic resistance [1].

When an antibiotic is suspected of having induced the agranulocytosis, one should keep in mind potential antibody crossreactivity, and choose the antibiotics to be administered carefully.

In our hospital, we commonly combine cephalosporins such as cefotaxime or ceftriaxone with aminoglycosides [1,6]. Alternatively to cephalosporins, the use of piperacillin/tazobactam or even imipenem may be considered in certain situations.

Therapeutic measures such as transfusions of granulocyte concentrates should only be used in exceptional circumstances, and only for the control of life-threatening antibiotic-resistant infections such as perineal gangrene [1].

In this setting, the usefulness of hematopoietic growth factors has been previously reported [2,16-18]. In our experience, G-CSF or GMCSF (at a mean dose of 300 μg per day) were found useful in druginduced agranulocytosis, especially in elderly patients, in shortening the duration to blood count recovery without major toxicity or side effects [18].

In a non-randomized cohort study of 54 elderly patients (˃65 years), we have previously shown that G-CSF use was safe and led to a significant reduction in the mean duration to hematological recovery: 5 days versus 10 days for neutrophil count to be ˃ 1.5×109/L [19]. The duration of antibiotic therapy and hospitalization, in addition to the global cost of agranulocytosis management, was also reduced.

More recently, in a multivariate analysis of all our drug-induced agranulocytosis patients (n=91), we have demonstrated that G-CSF was an independent variable positively affecting the duration to hematological recovery [14].

In elderly patients, idiosyncratic drug-induced agranulocytosis or deep neutropenia is typically a serious accident due to the frequency of severe sepsis (such as deep infections, septicemia and septic shock), but modern management with broad-spectrum antibiotics and hematopoietic growth factor, is likely to improve the prognosis. Given the increased life expectancy and subsequent longer exposure to drugs, as well as the development of new agents, physicians should be aware of this complication and its management.

Copyright: © 2016 Andrès E, et al. This is an open-access article distributed under the terms of the Creative Commons Attribution License, which permits unrestricted use, distribution, and reproduction in any medium, provided the original author and source are credited.