Acute Myeloid Leukaemia (AML) is a collection of neoplastic blood disorders categorized by the proliferation and growth of immature hematopoietic cells in the bone marrow and blood. The high incidence of AML is seen in adults, accounting for almost 80% of acute leukemia in adults and only 20% of acute leukaemias in children [1]. Though AML is a quite uncommon disease, it only accounts for about 1.2% of cancer deaths in United States [2]. It is most commonly found acute leukemia in adults. Its incidence increases with age. In patients with acute myeloid leukemia (AML), the median age is about seventy years [3] the majority of studies have found great occurrence of AML in males, constituting a male to female ratio of 2.5:1 [4]. In 2013, males have been accounted for more than 57 percent of the new cases of leukemia [5]. Acute Myeloid Leukemia (AML) is actually a varied selection of wide number of malignant neoplastic diseases that may be grouped on the basis of morphological, cytogenetic and also with molecular and genetics criteria [6]. The classification of acute leukemias is carried on the basis of clinical, morphological, hematological, immunophenotypic, cytogenetics as well as molecular statistics [7]. Usually the French-American-British (FAB) system has become the standard to classify AML into different sub-types [8]. The different sub-types of AML are categorized on the stage of maturation of precursors of WBC’s and their malignant transformation characteristics at the time of initial diagnosis. The developing countries have greater burden of cancer including hematological malignancies due to population growth, aging and urbanization, changing dietary habits, better control of infections, and increasing tobacco consumption [9]. The objective of the present study was to assess the Clinical and hematological profile of Acute Myeloid Leukemia (AML) in Patients of Sindh.

The study was conducted at National Institute of Bone Diseases, Karachi (NIBD), Sind Pakistan, a tertiary care and teaching hospital, affiliated with Liaquat University of Medical and Health Sciences, Jamshoro, 107 AML patients were included in this study. The selection of patients was based on the availability of the sample. Ethical approval for the study was obtained from the Ethics Review Committee of the LUMHS Jamshoro, to which NIBD is affiliated and the written consent for inclusion in the study was obtained from patients. Clinical details were acquired by taking history on predesigned written performa. Peripheral blood counts, peripheral smear examination, bone marrow aspiration, trephine biopsy, cytochemistry and immunophenotyping were used for diagnoses of all patients. Leishman stained bone marrow aspiration smears were observed, evaluated and classified into one of the eight FAB AML subtypes. Myeloperoxidase (MPO) stain was done in all cases. Patients with DE novo AML and having the presence of more than 20 per cent blasts in the marrow were included in the study 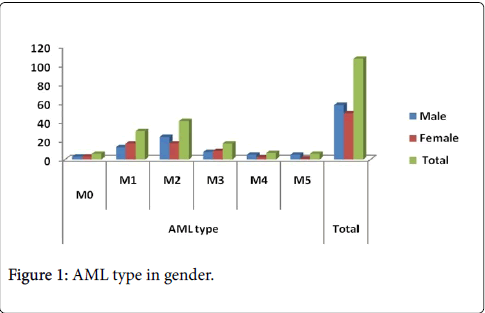 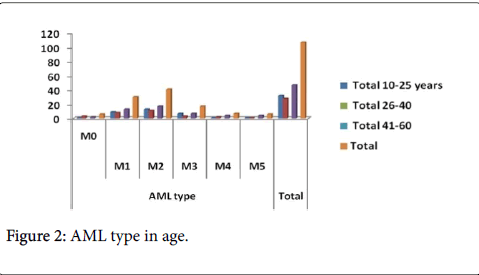 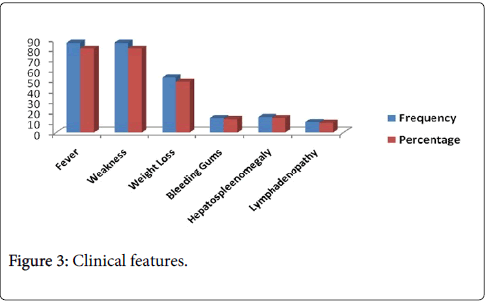 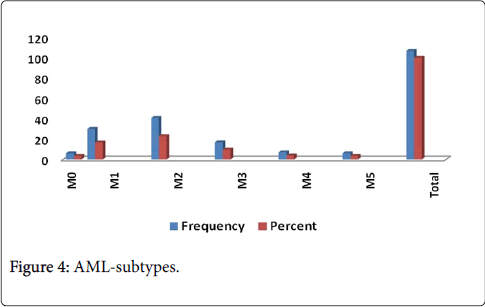 Acute Myeloid Leukemia is common in common in this part of world including Pakistan and India [9]. It is grouping together of disorders expressing a wide range of clinical, morphological, immunophenotypic and chromosomal abnormalities. It has the lowest survival rate amongst all leukemias. It is the most frequent form of leukemia in adults. It accounts for about 25% of all leukemias in this age group [6,7]. In this study, 107 patients of DE novo AML were included. The male to female ratio was 1.4:1. A lot of preceding studies had stated a greater incidence of AML in males though the male prevalence is not as distinctive as in ALL [5,6] in a study by male preponderance was also present, with a male to female ratio of 1.61:1.0. Greater incidence of all leukemia in males appears to rise as males are relatively more exposed to work-related and environmental hazards as has been submitted by some studies [10-12].

As regards age it was observed that at the time of presentation majority of patients (85.9%) was in the group of 25-60 years and only 14.1% of cases were in between 10-25 years of age. The same tendency has also been stated in many other studies done on adult patients showing mean age of 60 years 8 with majority of their patients below 60 years (68%). Similar observations were made by N Braham-Jmili et al.; they noted that 77% of their patients were less than 60 years age [13].

Disturbed hematopoiesis leads to the most common presenting manifestations, i.e., anemia, infection, and bleeding tendency. Among our patients majority presented with pallor and fever. Bleeding was also a common presenting feature. Similar findings have been reported in other studies on AML [11,12]. Rogers et al. have documented that pallor and fever were prominent feature in majority of subtypes [14]. Bleeding however was a prominent symptom in AML-M3. Most common types of bleeding were epistaxis, gum bleeding and easy bruisibilty [13]. According to Hassan et al. feeling of weakness; easy fatigability and pallor were invariably present in all FAB types. In their study on clinico-hematological features of AML, majority of patients presented with fever. As it was observed by [9] that low grade fever, progressive pallor, generalized weakness and bodyaches were the most common symptoms. Bleeding manifestations were most frequent in AML-M3 cases followed by M5, M1, M4 and M2, respectively [15].

Ghosh et al. from Tata Memorial hospital reported that majority of their patients presented with fatigue and pallor. They also reported that bleeding was most commonly seen in acute promyelocytic leukemia and monocytic leukemia. Patients with AML-M3 have significantly higher risks for intracranial haemorrhage than those patients with other subtypes of AML. In our series, none of the patients presented with intracranial bleeding. In AMLM3, there is also risk of bleeding from other sites and the bleeding diathesis is either due to thrombocytopenia alone or as a part of DIC [16]. In one of the local studies done by Qazi et al. on bleeding diathesis in acute myeloid leukemia it was noted that DIC was the most frequent in AML M3, followed by M5 [17]. The FAB classification has been the major system used by hematologists for more than 20 years. This classification is best suited for places where sophisticated investigations like cytogenetic studies and molecular studies are not available [18]. In our study most common subtype was AML-M1 followed by equal number of M3 and M4.

According to a study done in Japan on adult patients of AML, the most frequent subtype was M2 followed by M3 and M4. Table 2 shows comparison of AML subtypes with our study. As we look into the frequency of FAB types in different age groups, it was noted that AMLM3 subtype though common below 50 years of age, not a single case of M3 was seen in patients older than 50 years, the finding comparable with a study done in Japan on elderly patients of Acute Myeloid Leukemia [18]. In Acute myeloid leukemia extramedullary infiltration by leukemic cells may cause lymphadenopathy, splenomegaly or hepatomegaly. Lymphadenopathy is not as common as seen in acute lymphoblastic leukemia. Hepatosplenomegaly however is more frequent but massive hepatosplenomegaly is uncommon. In our patients, hepatomegaly and splenomegaly were observed in 48% and 45% patients respectively. Majority had mild to moderate hepatosplenomegaly.

Lymph node enlargement was noted in 33% patients. Gum hyperplasia was seen in only 10% cases and majority of them belonged to FAB types M4 and M5. Almost similar observations were made in other studies. Gum hyperplasia however was more frequent in both the studies (seen in 23%, 24% patients) as compared to our results and majority of their patients were diagnosed as AML-M4, M5 and M1 subtype. Anemia is a constant feature in all acute leukemias and in majority of cases is due to bone marrow infiltration leading to decreased production and rarely due to decreased red cell life span and autoimmune destruction. Evaluation of complete blood picture of our cases showed that mean hemoglobin was quite low. Our results are comparable with other studies [16].

It was present alone in 70% and as a part of DIC in the remaining 30% of cases. DIC was the most frequent in AML M3 followed by AML-M5 and M2, respectively. Relationship to age in their study showed that DIC was the most frequent in the old age group (23.3%), i.e., between 65 and 75 years [17]. Pancytopenia is not a common finding in AML as majority of patients have high leukocyte count though platelet counts and hemoglobin are decreased in majority of patients. Pancytopenia is associated complications of susceptibility to life threatening infections and bleeding tendency. It is not a disease entity itself but a hematological manifestation of several different disease processes. These disorders may affect bone marrow either primarily or secondarily, resulting in the manifestation of pancytopenia. In our study pancytopenia was noticed in 19.6% patients and bicytopenia in 68% patients. A study done in Nepal to look into the causes of pancytopenia showed that 3.7% of AML patients [21]. Hypocellular acute myeloid leukemia and hypocellular myelodysplastic syndrome represent a small (10%-15%) but a significant number of patients diagnosed with myeloid malignancies. In this study bone marrow was hypocellular in 12.5% cases. Hypocellular AML mainly affects elderly and account for 5-10% cases of de-novo AML. Both these conditions are associated with pronounced pancytopenia and it is sometimes difficult to separate these disorders from aplastic anemia. If not carefully examined, separation between these conditions can be problematic one observer.

It is concluded that FAB subtype M2 of acute myeloid leukemia was more prevalent than other subtypes, about 38.3%, followed by AML, M1 28%. Overall types of acute myeloid leukemia were more commonly seen in male patients. Age has significant effect being more common in adults. The frequency of AML increases in adults than children in the 86/14% ratio. The majority of patients were anemic with low hemoglobin levels less than 8 g/dl in 46% cases, leukocytosis and thrombocytopenia. Low grade fever, progressive pallor, generalized weakness, aneamia and body aches, lymphadenopathy, and hepatospleenomegaly were most common clinical features in patients.

Copyright: © 2016 Chang F, et al. This is an open-access article distributed under the terms of the Creative Commons Attribution License, which permits unrestricted use, distribution, and reproduction in any medium, provided the original author and source are credited.