The number of Total Knee Arthroplasties (TKA) in UK is gradually increasing according to National Joint Registry (NJR). According to a previous study, 94% surgeons in the UK use closed suction drains after total knee arthroplasty [1]. Various studies have been done to assess the efficacy of drains but no established evidence has been found to support their use after lower limb arthroplasty [2]. Reinfusion drains have gradually outnumbered closed suction drains over the last few years. Some studies have shown that autologous transfusion obtained from reinfusion drains reduces the requirement for homologous blood transfusion [3-5], however; some other studies have shown that reinfusion drains do not offer any significant benefit in reducing the transfusion requirements [6,7]. There are conflicting results available regarding the efficacy of routine Preoperative Autologous Donation (PAD) in reducing allergenic blood transfusion; however a recently published study has shown that preoperative autologous donation seems to be effective in reducing allergenic transfusions after total hip arthroplasty but not after total knee arthroplasty [8]. The use of tranexamic acid in knee replacement surgery has also shown promising results in reducing both the blood loss and the requirement of allogeneic blood transfusions postoperatively [9,10].

One must also consider the hazards of allogeneic blood transfusion, which range from minor complications to major potential health risks including transmission of blood-borne infections, allergic reactions, immune-modulatory effects and human errors in administering the blood [11]. The drains are used mainly to prevent haematoma formation after surgery. However; studies have shown that haematomas can still form despite the use of drains [1]. The presence of drains in a prosthetic knee can itself lead to potential clinical concerns including risk of infection and persistent drain site leakage after their removal. Drains can accidentally get stitched while closing the wound and may become very difficult to remove and may potentially require further surgical intervention. It is a routine practice to perform blood group and save sample preoperatively for patients undergoing knee arthroplasty. This is done in anticipation of potential requirement for blood transfusion after surgery.

We performed a retrospective review of patients over 3 and half years duration (January 2008 to June 2011) in a large teaching hospital. The aim of our study was to compare the requirement for blood transfusion after primary total knee arthroplasty with and without the use of drains and to analyse the cost of performing routine blood group and save preoperatively. The data were collected through the coding department to identify the patients who underwent TKR during the study period. Blood transfusion records were obtained from Haematology department and blood bank database. Preoperative and postoperative haemoglobin levels were recorded from computerised patient information system. All consecutive primary TKAs performed by 13 surgeons were included. Revision surgeries were excluded. Patients were divided into 2 groups; drainage group and non-drainage group. Transfusion records were obtained from haematology and blood bank database. All the patients were operated on in laminar flow theatres. Pneumatic tourniquet was used in all cases. Aspirin was used for Venous Thromboembolic (VTE) prophylaxis postoperatively for 6 weeks as per departmental protocols during the study period. Foot pumps and graduated compression stockings were used for mechanical prophylaxis against VTE. Tranexamic acid was not used in any of our patients. Two deep low-pressure vacuum drains (Redivac) were used in all patients in drainage group, which were removed approximately 24 hours after surgery. Minimally invasive technique was not used in any of these patients in either group. Among the non-drainage group, the results were compared between 2 surgeons named surgeon ‘A’ and surgeon ‘B’. Surgeon ‘A’ had routine practice of using drains after knee arthroplasty during the years 2004 to 2007, while he stopped using drains from January 2008 onwards till date; therefore we found it interesting to compare his own results as well. Postoperatively standard routine mobilisation and physiotherapy was encouraged in all patients. Full blood count was checked routinely on 1st postoperative day in all patients in both groups. Patients who had combination of low Hb (below 8 g/dl) and symptoms (low blood pressure, raised heart rate, dizziness) were transfused. However in some patients blood transfusion was given even up to Hb of 8.8 g/dl due to either persistent symptoms or known cardiac disease. We did not review postoperative infection, other complications, length of hospital stay and implant failures in this particular study because the objective was to focus on blood transfusion analysis between the two groups.

Table 1: Comparison of the two groups. 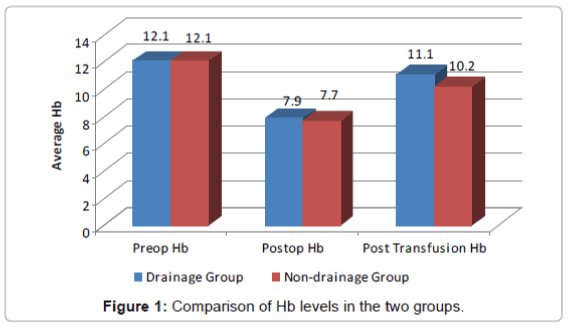 Figure 1: Comparison of Hb levels in the two groups. 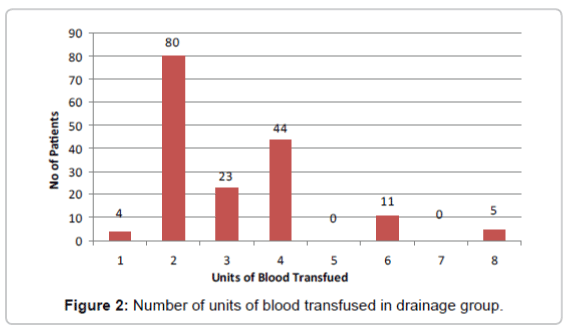 Figure 2: Number of units of blood transfused in drainage group. 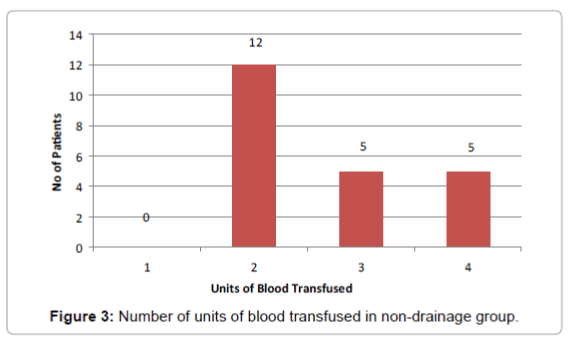 Figure 3: Number of units of blood transfused in non-drainage group. 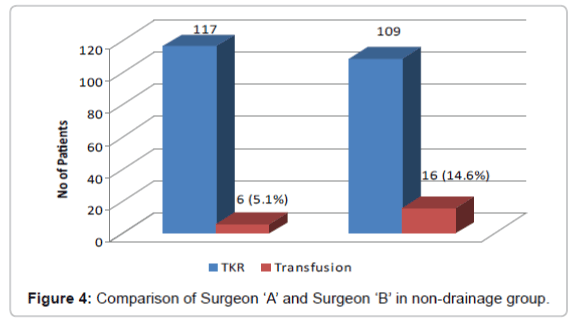 Figure 4: Comparison of Surgeon ‘A’ and Surgeon ‘B’ in non-drainage group. 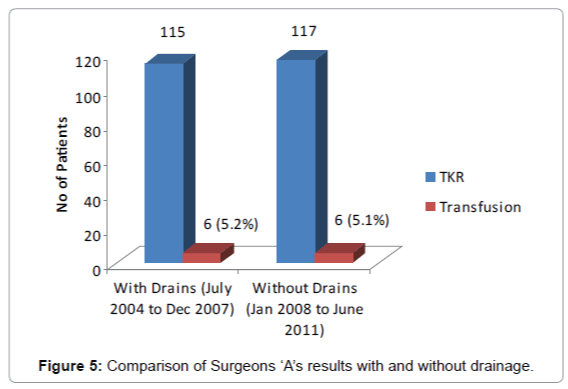 Figure 5: Comparison of Surgeons ‘A’s results with and without drainage.

It is important to note here that there were some differences in surgical practice of the 2 surgeons in non-drainage group. Surgeon ‘A’ closed the wound with knee in extension, did not release tourniquet before bandage, and did not use diathermy at all. In contrast, surgeon ‘B’ closed the wound with the knee in flexion, released tourniquet before closure and used diathermy to control bleeding points before closing the wound and application of bandage.

Studies have shown wide variations in the use of blood transfusion after total knee arthroplasty, suggesting potential for reduction in its use [12]. A few previous studies have shown that as much as 70% patients required blood transfusion following total knee arthroplasty in the past [13,14]. However the trend has gradually changed with more strict transfusion guidelines and the decision for transfusing patients being based on clinical grounds rather than the availability of blood. The World Health Organization definition states that anaemia should be considered to exist in adults whose haemoglobin levels are lower than 13 g/dl (males) or 12 g/dl (females). Patients who are anaemic preoperatively are more likely to require transfusion after surgery, so it is important to try to correct anaemia and iron deficiency preoperatively. Studies have shown that oral ferrous sulphate is useful for correcting iron deficiency in non-anaemic patients [15]. A recent study has suggested that oral ferrous sulphate does not increase preoperative Hb levels in patients planned for elective total hip or knee arthroplasty [16], however intravenous iron replacement was found to be effective in increasing preoperative Hb in these patients according to another recent study [17].

It is difficult to ascertain a threshold value of haemoglobin for transfusion, however in younger and fitter patients; a haemoglobin concentration of 7.0 g/dl or less, is a reasonable threshold for transfusion [12]. For patients with evidence of ischemic heart disease, it may be safer to maintain the haemoglobin concentration above 9.0 g/dl [18]. Elderly patients especially with ischemic heart disease, on one hand are less tolerant to low Hb levels, but on the other hand are more susceptible to adverse effects of blood transfusion due to the risks of congestive heart failure and fluid overload. Younger patients have more risks of developing long-term complications of blood transfusion (Table 2).

The use of drains in total joint arthroplasty remains a controversial area in orthopaedic literature as well as in clinical practice. Many studies have reported considerable doubt with respect to the benefits of their usage [1,19]. Widman et al. in their study, showed no benefit of drains in reducing the postoperative haematoma volume even with use of two drains [20]. Kumar et al. in their study have shown that the routine use of suction drainage should be avoided after an uncomplicated total joint arthroplasty since it does not influence the incidence of wound complications and postoperative rehabilitation, and this helps to cut expenses [21]. Reilly et al. found more wound problems in knees, which had been drained (5.8% versus 3%), and the drain or its track may act as a portal for bacteria [22]. Walmsley et al. showed a 7% lower rate of transfusion in patients without the use of drains [23,24].

On the other hand, various studies recommend the use of drains based on their results. Kim et al. [25] and Holt et al. [19] recommended the use of drains as they found a repeated need to change dressings in patients without drains, which resulted in discomfort for the patient and nursing staff even though there was no increase in the infection rate [24]. The use of reinfusion drains with autologous transfusion has shown the benefit of reduction in allogeneic blood transfusion requirement and has been reported to be cost-effective [5,14,25,26]. Various techniques have been tried in order to reduce the potential requirement for allogeneic blood transfusion after joint replacement surgery. These techniques include Preoperative Blood Donation (PAD), Acute Normovolemic Haemodilution (ANH), Perioperative Red Cell Salvage (PCS) and certain anaesthetic techniques (deliberate hypotension, normothermia) [27].

Our study had its own limitations. It was a retrospective study and the number of patients in two groups was not proportionate to each other. There was no bias in transfusion data as it was matched and crosschecked by blood bank staff, without knowing the design of study and its details. However, we could not exclude bias in transfusion rates due to decision making for giving blood transfusion. We focussed on transfusion analysis and did not include postoperative wound or joint infections requiring further surgeries, because these aspects were not considered in the objectives of this particular study. Our results have shown that the transfusion requirement in the two groups was comparable without any statistically significant difference. By applying Fisher’s exact test, the calculated p value was 0.240. However the number of units transfused in the drainage group was more than the non-drainage group. We also found that the number of female patients requiring blood transfusion was more in both groups. Haemoglobin levels were similar in both groups. We found that patients with low baseline preoperative Hb levels were more likely to require transfusion postoperatively.

Based on our results, we did not find any significant difference in blood transfusion requirement in the two groups; however the number of units of blood transfused was found to be more in drainage group. Performing selective group and save for high-risk patients and not using drains after total knee arthroplasty may prove to be cost-effective without raising any clinical concerns.

The authors are grateful to the haematology department at Royal derby Hospital for providing us with valuable data for this study.

Copyright: © 2013 Majeed H, et al. This is an open-access article distributed under the terms of the Creative Commons Attribution License, which permits unrestricted use, distribution, and reproduction in any medium, provided the original author and source are credited.