Sleep is a vital reparative, restorative and physiological phenomenon, and impaired sleep has significant negative impact on health [1]. The quality of sleep is a measure of both the quantitative and qualitative component of sleep. The quantitative component involves the duration of sleep whereas the qualitative components is a subjective measure of the depth and feeling of restfulness upon awakening [2]. Sleep quality is an important clinical entity for two major reasons. In the first instance, complaints about sleep quality are common; epidemiological surveys indicate that 15-35% of the adult population complain of frequent sleep quality disturbance, such as difficulty falling asleep or difficulty maintaining sleep [3]. In addition, poor sleep quality can be an important symptom of many sleep and medical disorders. One frequently measured component of sleep quality, sleep duration, may even have a direct association with mortality [4]. According to the National Sleep Foundation adults should get between 7 and 9 hours of sleep each night [5].

Sleep quality complaints are particularly relevant to physicians. Factors relating to anxiety and stress are one of the most important concomitants of sleep complaints in the general population [6]. Sleep quality represents a complex phenomenon that is difficult to define and measure objectively. It varies with sex and age. Females have higher risk of poor sleep quality [7]. Increased age is also associated with indices of poor sleep quality [8]. Bansil et al. reported that combinations of sleep disorders short sleep duration and quality of sleep were associated with increased risk in the prevalence of hypertension [9]. In another study, subjective sleep duration was negative related to depressive state [10].

The largest and longest study on adult sleep habits and weight was the Nurses’ Health Study, which followed 68,000 middle-age American women for 16 years [11]. Compared to women who slept seven hours a night, women who slept five hours or less were 15 percent more likely to become obese over the course of the study. Abdulsalam et al. [12] found no significant correlation between age, weight, height, BMI and sex of students.

Subjective Sleep quality had been associated with hypertension, depressive symptoms and higher body mass index (BMI) with paucity of data in Nigeria, hence the need for this study.

This study was conducted at the General Outpatients Clinic (GOPD) of Kwara State Specialist Hospital, Ilorin, and north Central Nigeria. The target populations were the newly registered patients attending the clinic.

The sample size was estimated using the Fisher’s Formula [13],

using 32.5% from a previous study [14], as the best estimate of poor sleep quality among medical students at a Nigerian University, a minimum sample size of 337.1 was calculated, but 400 was used to increase the reliability of the study.

A systematic random sampling method was used in recruiting respondents for this study, from the period of study from October 30 to November 30, 2013. Already identified depressed subjects who were on treatment and those who refused to give consent were excluded from the study. Pretesting was carried out at the Kwara State Civil Service Hospital, using 40 respondents (10% of the sample size). Ethical approval was obtained from the Ethical Review Committee of the Kwara State Ministry of Health before the commencement of the study.

The Pittsburgh Sleep Quality Index (PSQI) was used for the subjective assessment of sleep quality [2]. The PSQI is a questionnaire consisting of 19 items which are coded on a 4-point scale (0-3) to obtain seven sub-categories, including sleep duration, sleep efficiency, sleep satisfaction, and medication use. The sum of all sub scores represents the total sleep quality score, ranging between 0-21, with higher scores representing lower sleep quality. The individuals were categorized as follows: good sleep quality (less than 5) and poor sleep quality (greater than or equal to 5). Psychometric properties have demonstrated good reliability internal consistency 0.89; test retest reliability 0.85) and good construct validity for the English language version [15].

The Patients Health Questionnaire (PHQ-9) [16] is a brief, 9 - item, patients self-report depression assessment tool that was derived from the interview-based PRIME-MD [17]. It was specifically developed for use, in primary care. It is the only tool that was specifically developed for use as a patient self-administered depression diagnostic tool, rather than as a severity or screening tool. It is the only short self-report tool that can reasonably be used both for diagnosis of DSM-4 major depression as well as for tracking of severity of major depression over time [18]. Psychometric evaluation of the PHQ-9 revealed a sensitivity ranging from 62%-92% and a specificity between 74%-88% [16-18]. All subjects screened positively for depression using Patients Health Questionnaire – 2 (PHQ-2), which was the first two questions of PHQ-9, triggered full diagnostic interviews by the behavioral scientists. Respondents who scored one and more were assessed clinically for depression. Scoring and level of depression was assessed viz: (1-4) minimal depression, (5- 9) mild depression, (10-14) moderate depression, (15-19) moderately severe depression, and (20-27) severe depression. Some direct depression care, such as care support, coordination, case management, and treatment was embarked on.

An Accosson Mercury sphygmomanometer was used to measure the resting blood pressure of the subjects in a sitting position. Classification of hypertension was made according to the seventh report of the Joint National Committee on Prevention, Detection, Evaluation and Treatment of high blood pressure (JNC 7) [19] recommends the following classification of blood pressure for adults aged ≥ 18 years

Completed questionnaire and measurements were entered into a computer data base. The data were analyzed using the epidemiological information (Epi-info) 2005 software package of Center for Disease Control and Prevention (CDC).Stepwise multiple regression analysis was conducted and poor sleep quality was significantly correlated with hypertension, depression and body mass index, the level of significance and values less than 0.05 were regarded as statistically significant.

Table 1: Socio-Demographic Characteristics of The Respondents.

Table 4 shows the association between blood pressure, depression, body mass index and psqi among the subjects, at the family practice clinic.

Table 4: Association between Blood Pressure, Depression, Body Mass Index and Psqi among the Subjects, At the Family Practice Clinic. 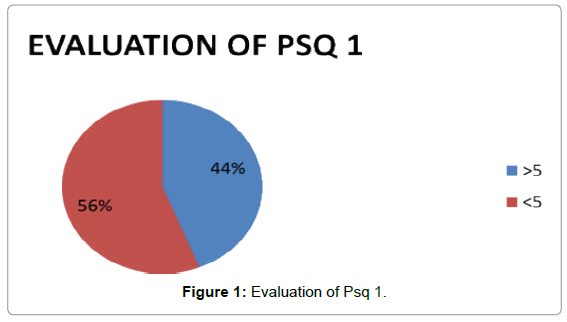 The prevalence of poor sleep quality among the subjects was 44%. This was consistence with Suen and co-workers [20], in the US, who reported 42% and also similar to the findings of Krishna and colleagues with the prevalence of 42% [21], but higher than the CDC surveillance report of 35.3% [22] and the findings of Bawo and co-workers, at a Nigerian University with 32.5% [14], On the other hand, the result was lower than Seblewngel and colleagues [23], who found that the prevalence of poor sleep quality was 55.8%, Cheng et al. [24], who reported 54.7% and Adewole et al. while studying sleep disorders and sleep quality among adult’s patients presenting at the General Outpatients Department in ObafemiAwolowo University Teaching Hospital Complex (OAUTHC) in Nigeria, who reported prevalence of 50% [25].

The apparently high prevalence in this study may be attributed to lower health-related quality of life, low socio-economic status and concomitant poor medical conditions, and to snoring which is common among hypertensive subjects in South Western Nigeria [26]. In addition, it could also results from Obstructive sleep apnea (OSA) was high in Nigeria [27]. In this study, the overall sleep quality was very good, fairly good, fairly bad, very bad in 30.8%, 33.2%, 19.5%, and 16.5% of the subjects respectively. This result was higher than that of Vivek et al. [28], in Banasthali University Rajasthan, India, where distribution of sleep quality were excellent 20.4%, good 38.5%, satisfactory 35.8%, poor 4%, very poor, 1.3%.

Consistent with previous studies [29,30], poor sleep quality was associated with depression [31,32]. Depression was significantly associated with sleep complaints; a finding that was consistent with previous reports [33]. The relationship between depression and sleep disturbances was so strong that it was one of the diagnostic criteria of major depression [34]. High degree of depression and anxiety were found to be the influencing factors of poor sleep among Chinese adolescents [35].

There was a strong statistical association between body mass index and PSQI Score. Obese class 3 was poor sleepers. This was similar to the finding of Pearson et al. [36] who found that obese patient had difficulty with sleep. This result was consistence to the findings of Anne et al. [37]. However Abdul Salam et al. [12] found no significant correlation between age, weight, height and BMI.

Several studies had indicated that insufficient sleep, less than five or six hours were associated with weight gain [38]. The result of this study contrasted with Watson et al. [38] who found no relationship between subjective sleep quality and BMI and to Aylin et al. [30] who found no significant relationship between body measurement and PSQI scores [39]. Also, Van and Knutson [40] found no association between sleep quality and BMI.

In this study, there was statistical association between high blood pressure and PSQI (p-value = .002). Pooja et al. [9] found out that among people with both sleep disorder and short sleep, the likelihood of hypertension was slightly more than twice that for people with no sleep problems. This relationship may, in part, be the result of biologic mechanisms, suggesting that sleep deprivation may alter cortisol stress hormones and the sympathetic nervous system, resulting in elevated BP. In the sleep Heart Health Study, subjects sleeping ≤5 h/night had a higher frequency of prevalent hypertension [41] The Whitehall II [42] study also found that, women sleeping ≤ 5h/night had a higher risk of hypertension compared with those sleeping 7 h/night.

Copyright: © 2014 Shittu RO, et al. This is an open-access article distributed under the terms of the Creative Commons Attribution License, which permits unrestricted use, distribution, and reproduction in any medium, provided the original author and source are credited.