The Vogt-Koyanagi-Harada syndrome (VKH) is a bilateral, severe granulomatous uveitis associated with serous retinal detachment, papillary edema and extra-ocular manifestations. Uveitis in children accounts for 5 to 10% of all uveitis cases; the VKH is rarely described in the children population. The diagnosis of this condition can be very challenging; especially if clinical diagnosis criteria are not being met at the onset of this affection. The visual prognosis is mostly good if the treatment is early started.

Vogt konayagi harada syndrome VKH, is as an autoimmune disorder driven by melanocyte antigen-reactiveT-cells [1], this syndrome is characterized with a chronic, bilateral granulomatous panuveitis, associated with exudative retinal detachments and signs of meningeal irritation with or without auditory disturbances and skin changes [2]. Occurring only rarely in children, VKH is thought to have more aggressive course in children than in adults in case of therapy delay [1].

We repot a rare case of VKH, in 13 years old boy, revealed with bilateral uveio-papillitis associated with serous retinal detachment, to underline the possibility of occurrence of this affection in children population and to emphasize the importance of early diagnosis and adapted treatment, with high dose of corticosteroid therapy, to prevent ocular complications and vision deterioration.

A 13 years old boy, with no history of ocular trauma or surgery, was admitted to the emergency department for bilateral acute visual impairment associated with headaches, tinnitus and vomiting, during 10 days before his admission. Ophthalmological examination was notable for severe loss of visual acuity, estimated at light perception in both eyes, bilateral granulomatous panuveitis, multiples retinal serous detachments and optic disk swelling on fundus examination. IOP was 14 mm hg in the right eye and 16mmhg in the left eye (Figure 1). Fluorescein angiography was notable for numerous punctate hyperfluorescent dots at the level of the retinal pigment epithelium with late pooling of the dye in the subretinal space in both eyes (Figure 2). Optical coherence tomography showed the presence of multiples serous retinal detachment (Figure 3). General examination was unremarkable notably with no dermatological abnormalities however a sensorineural hearing loss was found on the audiogram. Laboratory blood screening including infectious, inflammatory, and auto-immune tests was normal as well as Brain and orbit MRI scans. Nevertheless, the cerebrospinal fluid analysis revealed pleiocytosis. These findings led to suspect a diagnosis of incomplete form of VKH syndrome, and the patient was treated immediately, with intravenous methylprednisone (10 mg/kg/day), renewed for 3 days, shifted by oral, prednisone (1 mg/kg/day) for 9 months prior to a slow tapering off. 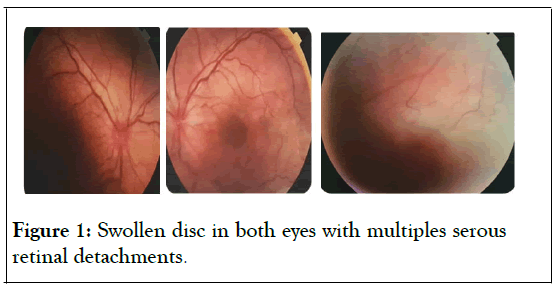 Figure 2: Multiples punctuate hyper- florescent dots at the level of retinal pigment epithelium with late pooling of dye in the sub-retinal space in both eyes. Figure 3: Serous retinal detachment on the right A and left eye B.

The outcome was spectacular, we noticed an increase of visual acuity estimated at (20/20) after one month of therapy, and a complete disappearance of Subretinal fluid (Figure 4). The child was monitored to detect side effects of cortico-therapy throughout the treatment period. Neither relapse of ocular inflammation nor side effect of treatment such as cataract formation, intraocular pressure (IOP) rise nor growth retardation was observed during the one-year period of follow up. Figure 4: Resolution of serous retinal detachment after treatment in both eyes.

The visual acuity was always preserved at 20/20, however we noticed hyper pigmented zones on the fundus examination which was in favour of vogt koyanagi harada syndrome diagnosis.

In 1906, VKH syndrome was first described by Vogt, in patients who experienced, poliosis accompanied by bilateral uveitis, vitiligo, alopecia, and dysacousia [3].

Vogt-Koyanagi-Harada syndrome is more common among oriental or darkly pigmented skin individuals, between forth – fifth decades. And like other autoimmune diseases, appears to be slightly more predominant in females. Pediatric cases are so rare.

The pathogenesis of this condition is unknown, several studies suggest that this affection, is due to an autoimmune role of T lymphocytes against melanocytes cells which triggered by certain factors. Prodromal symptoms indicate the possibility of herpes family infections (Epstein-Barr virus, Cytomegalovirus) as a triggering factor. Although the exact target antigen has not been identified, candidates have been proposed. They include tyrosinase or tyrosinase-related proteins [3].

VKH disease occurs in genetically susceptible individual, a high frequency of HLADR4 among Japanese patients with VKH is found [2].

The clinical course, of VKH syndrome, is characterized with an evolutionary four-step process: At the onset, Prodromal stage, followed by an acute uveitic phase, which may last for several weeks. The convalescent or chronic phase is characterized with gradual integumentary and uveal depigmentation that may persist for several months to years depending on the timing and course of therapeutic intervention. Recurrences, in form of anterior uveitis, may interrupt this convalescent phase, called also the chronic recurrent phase [4].

These clinical signs are the golden stone of the diagnosis of this affection. Although typical cases of VKH syndrome show all of the ocular and extraocular manifestations, such cases are relatively rare. Because of variations of VKH clinical manifestations at varying stages of the disease. Revised Diagnostic Criteria (RDC) for VKH disease,were proposed at the First International Workshop on Vogt-Koyanagi-Harada Disease, which divide patients in 3 categories: probable ,incomplete and complete form , to facilitate the diagnosis of Vogt-Koyanagi-Harada disease regardless of the stage at which the patient is examined especially in early stages [5] .

In our case the child had ophthalmologic, neurological and auditory manifestations; the diagnosis of incomplete VKH was based on the international criteria.

VKH syndrome in children, has similar manifestations and complications as in adults, however, the clinical course seems to be worse than in adult and likely less responsive to treatment [2] according to the study of Tabbara and col. The visual impairment is a result of recurrences and chronic inflammation that can cause Vision-threatening complications notably retinal pigment epithelial changes, cataract, focal retinochoroiditic scars, subretinal neovascularization, glaucoma, and phthisis bulbi [4].

The principal aim of the treatment is to shorten the duration of illness, decrease the incidence of convalescent’s stage, and extra ocular manifestation as well [3]. Abu El-Asrar and colleagues reviewed 23 cases (46 eyes) of VKH disease in children. They found that visual acuity of 20/40 or better had been obtained in 82.6% of eyes. According to this study, the occurrences of complications, such as cataract and glaucoma, and poor visual prognosis, is directly linked with the recurrences of ocular inflammation. On the other hand, a positive association has been proven, between final visual acuity of 20/20 and a shorter interval between the onset of symptoms and starting treatment [6].

In this study, Abu El-Asrar and colleagues, extracted the factor associated with poor visual prognosis namely, a worse initial visual acuity, the presence of posterior synechiae of the iris at the onset, the development of complications, a longer interval between symptoms and treatment, recurrence of inflammation, and rapid tapering of systemic corticosteroids [6].

The ocular inflammation, in our patient, was so severe, that three courses of high-dose intravenous corticosteroid therapy were required to resolve the serous retinal detachment. Before treatment, our patient had a poor initial visual acuity, which is associated with the risk of recurrent inflammation. Therefore, no other clinical prognostic factor was found, and the interval between symptoms and treatment was short which led to successfully treat the child.

The Standard management of VKH consists of pulse administration of high-dose of intravenous corticosteroids followed by an oral corticosteroid. Steroid is given for 6-9 months prior to slow tapering off [3].

Immunosuppressive drugs, such as cyclosporin, cyclophosphamide, chlorambucil, azathioprine and mycophenolate mofetil, are reserved for refractory cases of VKH, with no response to corticosteroid treatment. But these patients must be closely monitored to look for systemic complications due to these medications.

Juvenile VKH syndrome is so uncommon, yet it sometimes occurs. The clinical course of this affection in children is worse than in adult and can be potentially blinding, luckily high dose of corticosteroid can improve visual prognosis, and prevent visual complications.

Copyright: © 2021 Khanaouchi N, et al. This is an open-access article distributed under the terms of the Creative Commons Attribution License, which permits unrestricted use, distribution, and reproduction in any medium, provided the original author and source are credited.